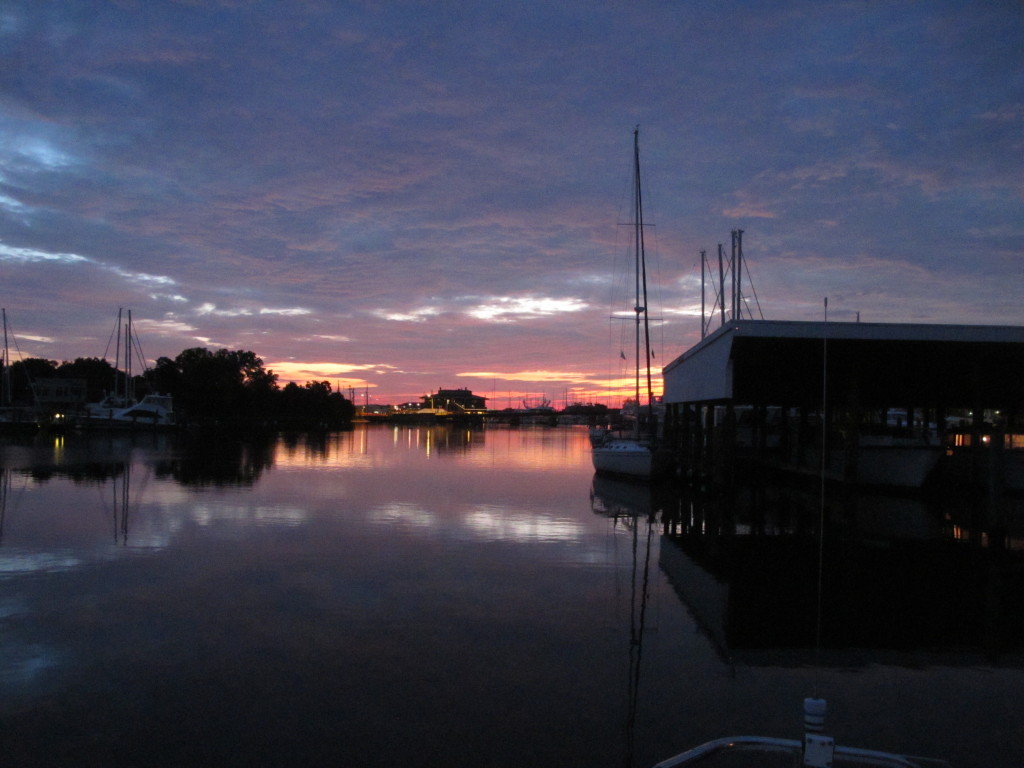 It’s been exactly three months since we moved onto the boat, summer has been and gone (together with the work barge), the house opposite is almost built, and that faint glimmer we see at the end of the tunnel may just be daylight and not the lights of an approaching freight train.

It’s been an incredibly hard grind, but the difficult plumbing and wiring jobs are just about done. For any of you who’ve seen that great Australian movie “Kenny” (about a sanitation plumber hailed as ‘the Dalai Lama of Waste Management”), Bruce now qualifies as Master Apprentice at the very least, if not the reincarnation of the great man himself. We were under the impression that the boat already had holding tanks installed but it turns out that was a very loose description. What we actually had were two black fuel bladders (unused) under the floor in each hull, with some cursory piping attached to each bladder, but that piping wasn’t attached to anything else! Thank goodness we didn’t test them out, could have been messy. So Bruce has had the unenviable task of pulling out the old bladders and piping, and building his very own Kenny Mk II system from scratch, one for each hull, located in what used to be our hanging lockers.

OK, the result may look like some crazy contraption from Dr Who, but hey they work!! We now have the ability to pump out overboard when at sea, or use the deck fitting at a pump-out station in harbour, so we are now legal wherever we go. All hail the dunny king!

With the aid of some new pressure gauges, the dratted water-maker is also operational (no thanks to the Italians!) although it’s too difficult to tell what the water quality is like due to the muddy, brackish water we’re sitting in. So we may have to wait until we get into cleaner water to thoroughly test it.

Meanwhile, I’ve been making 3 new cockpit cushion covers, painting the cabin-top and cockpit sole with anti-skid paint, polishing, cleaning, provisioning, laundering (clothes not money, sadly!) and assisting the skipper with an extra pair of hands when needed. Many of these types of jobs that are so easy on land become a little more complex and time-consuming when you live on a boat. For instance doing the laundry is a half-day affair by the time you dinghy over to the city dock, wheel your laundry bags 5 blocks, wait for the washing and drying to be done and then reverse the process. Not that I mind at all, I quite enjoy my weekly excursion, and the chance to meet other cruisers in the laundromat and grab a cup of coffee. Depending on the time of day, there’s also a rather nice Irish pub just opposite…!

Our new bimini cover arrived yesterday, together with new shadecloth covers for the saloon windows. Goodbye to the ‘charter boat’ blues, hello toast! 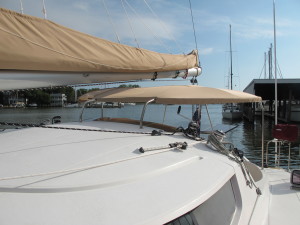 And it seems there are some toys creeping onto the boat… 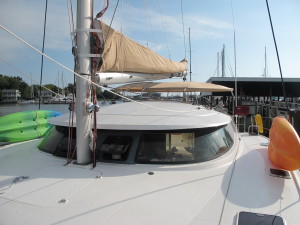 But we’re not quite out of the woods yet. Both engines needed servicing, and we’ve been patiently waiting for the mechanic to arrive to complete the job. Last week he arrived, disappeared into the engine bay only to re-appear 5 minutes later. “I’m not sure how far you want to go into this” are not the reassuring words we were hoping to hear. Like everything else on this boat, it seems the engines have been sadly neglected. Not only are the secondary seal clamps on the saildrives missing, but there’s a fairly substantial oil leak from the port engine (most likely from the rear oil seal), and the exhaust elbows and hoses are in very bad shape. Our hearts sank, thinking we’d need to haul out to get the work done. But with some extensive research and much discussion with other cruisers we’ve worked out how to replace the saildrive seal clamps without hauling out, and the rest of the work can be done while the boat’s in the water. But once again we’ve been dock-bound waiting for the work to be completed. Arrgghh!!

The rig check is happening next week, so that’s another hurdle we hope to clear without any nasty surprises.

BUT, today the glimmer of light is back – the rear oil seal’s been replaced and provided we’re careful with our use of the port engine until the remainder of the work is completed, we’re free and clear to get off the marina and go sailing! So tomorrow the plan is to sail down the bay in company with another boat from our marina, “Mischief”, a Grand Soleil 40’. Peter and Pam are a great couple who’ve been so welcoming and hospitable. They’ve taken us out sailing when we’ve been miserably dock-bound, and have invited us to their home when the weather was unbearably hot. I’m sure we’ll have a great weekend – our destination is St Michael’s, a lovely historic town that we visited by car a while ago. So fingers crossed that everything works the way it should (and stays working)!!!

2 Responses to The Glimmering Light