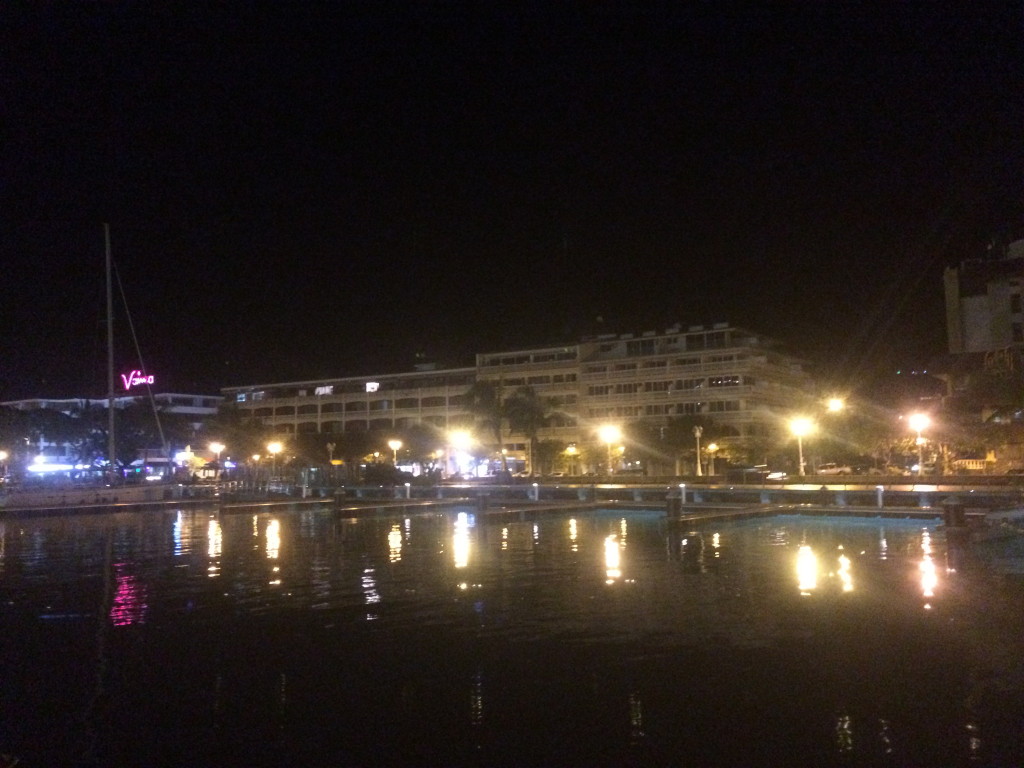 Papeete waterfront from the marina

Well, I guess Papeete isn’t that big a city compared to others, but after a few months of coral atolls it was a shock to the senses to be back amongst the hustle and bustle of traffic and city noise.

It should have been an easy two-day run from Tahanea to Papeete but weather god Huey was obviously on smoko-break (again) so we flopped about in less than 8 knots of breeze most of the time trying every sail configuration possible to conserve fuel. Luigi was given a bit of a run but even he was too big and strong for the light breeze, so reluctantly we had to motor-sail most of the way. By day two it was clear that we wouldn’t make it in before dark so we slowed down even more and had a third, very slow night at sea before arriving off the north coast of Tahiti just as dawn was breaking. What a reward after the frustrating passage! 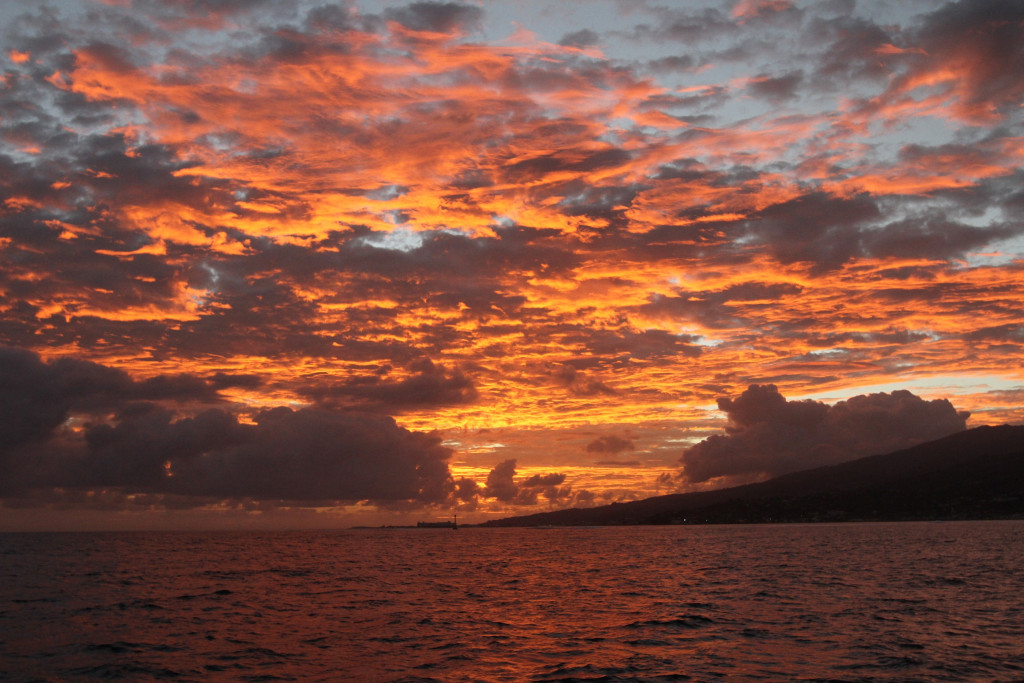 Tahiti is surrounded by a ring of coral reef with many passes through to the lagoon. Not wanting to go into the main harbour of Papeete we travelled a bit further south and came in through Pass Taapuna. The pass itself was fine, but either side were large surf breaks filled with local surfers and paddle-boarders – it seems most people take the dinghy out to the pass and then jump in for a surf, pretty cool! 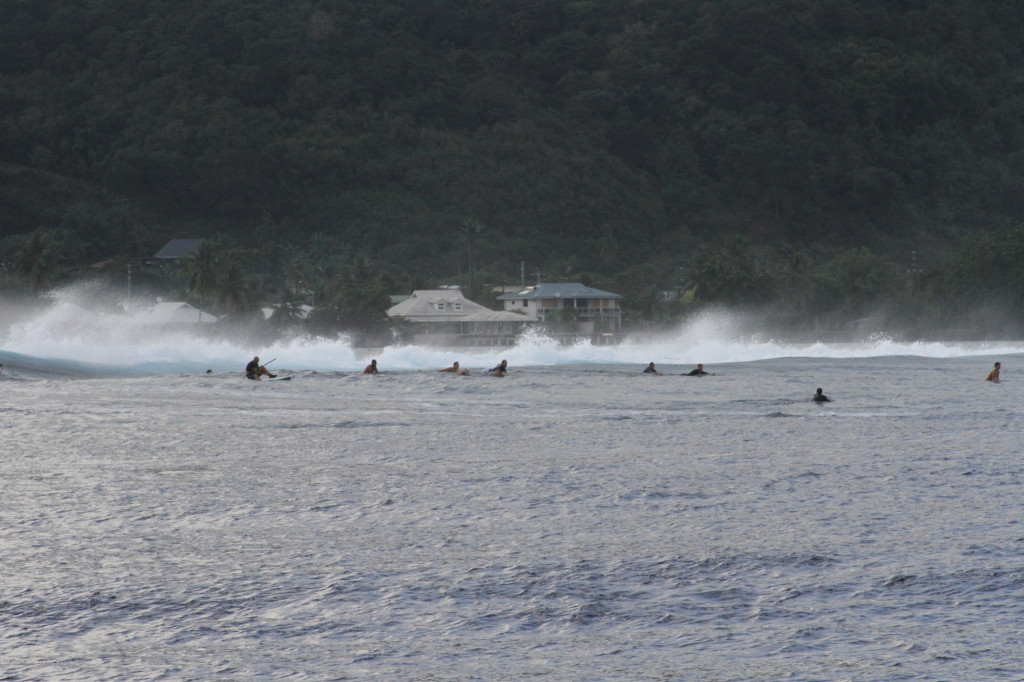 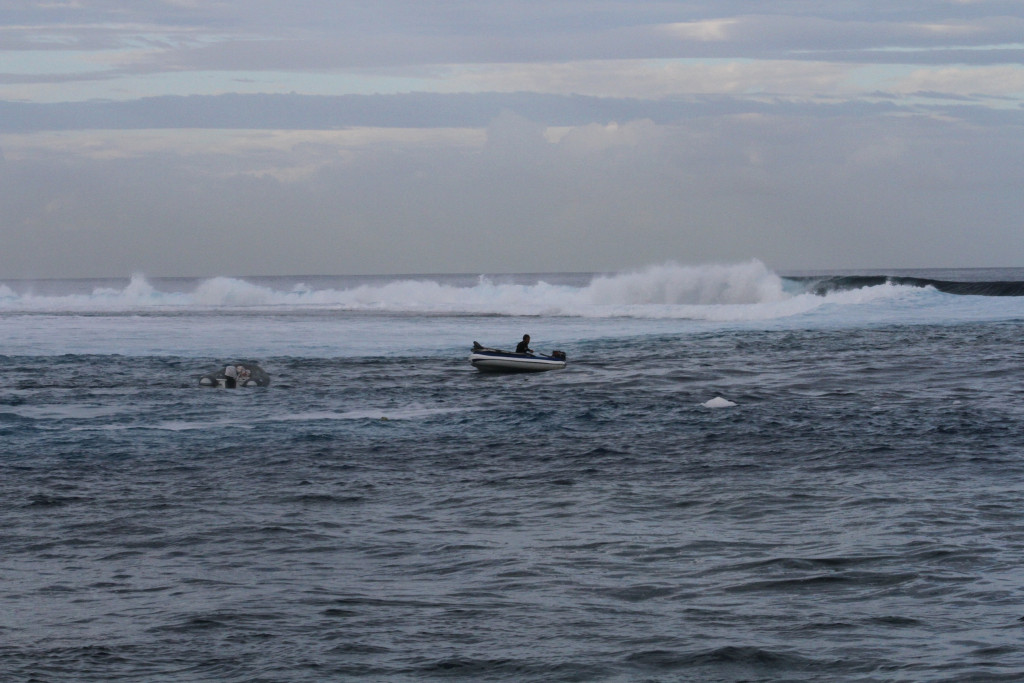 park your dinghy and jump in!

We anchored just to the north of Marina Taina in amongst a smorgasbord of international cruising yachts. We’ve been gobsmacked at the number of boats here, particularly as we’re towards the tail end of the ‘puddle-jumpers’. There’s an awful lot of people out here doing the same as us! 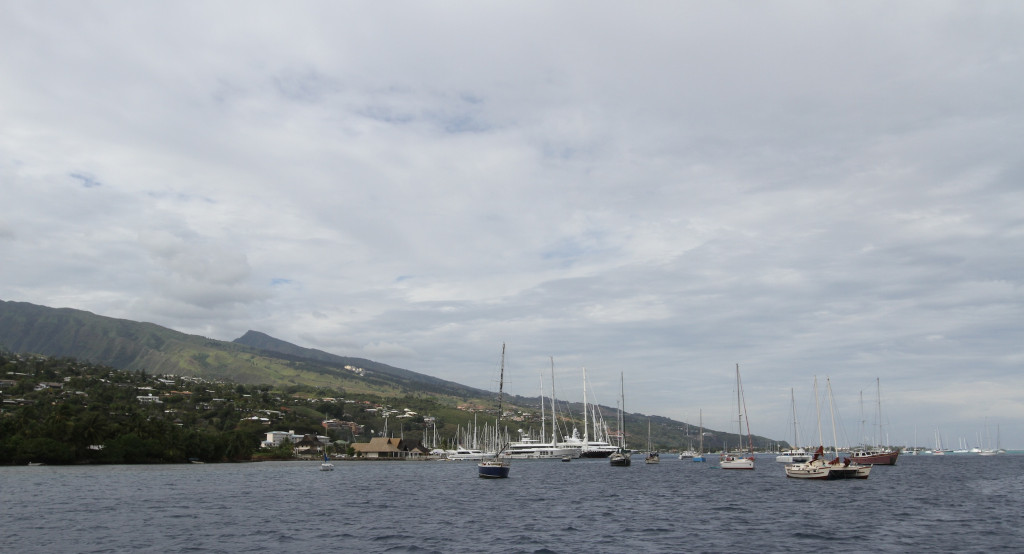 the anchorage off Marina Taina

And for all of us, Papeete is a necessary stop to get things fixed and re-provision for the next leg of the Pacific. So we’ve been even more surprised at the difficulty we’ve had getting parts or any kind of boat services. If you ever need to know about the industrial zone in Papeete, just ask us – we’ve walked every square inch of it trying to hunt down stainless steel fabrictors, electrical suppliers, water pump distributers etc. There are a couple of chandleries here but they’re woefully understocked – someone would make a killing if they could set up a ‘one-stop’ shop for yachties, but I guess that’s asking too much organization from the French!

As you may gather, we haven’t been overly enamoured by Papeete – it’s disorganized, expensive and not yacht-friendly, but to be fair we haven’t had a chance to explore much more than the industrial area and the main shopping strip, so I’m sure there are many more delightful places that we’ve missed. We have enjoyed the baguettes, French cheeses and pates though!

The good news is that joy of joy we finally got our wind generator working. After dismantling it and doing lots of diagnostic tests with the help of a local guy and Seathan from Rehua, the culprit turned out to be a couple of loose connectors in the head unit. It’s wonderful to finally have some auxillary power so we don’t have to run the motors as much to charge the batteries. We didn’t have quite so much luck with the fridge – it seems the thermostat has gone and with no possibility of getting a replacement part here we’ll have to wait until we can get one shipped further down the track. But at least the fridge is working, it’s just running constantly so we’ll have to act as human thermostats and turn it on and off manually. A pain, but not a disaster. We managed to get some other parts shipped in from the USA so we now have a new VHF radio and all our winches are operational once again. Sadly the new VHF handset didn’t completely fix the problem so it looks like a trip up the mast to replace the aerial and cable as well, once we can find a calm anchorage without speed boats creating huge wakes.

Because of all the necessary running around in town, after our first week on anchor we decided to book into the new marina in downtown Papeete. There was plenty of room and good facilities with showers and laundry and it was certainly convenient to be able to walk off the boat straight into town. 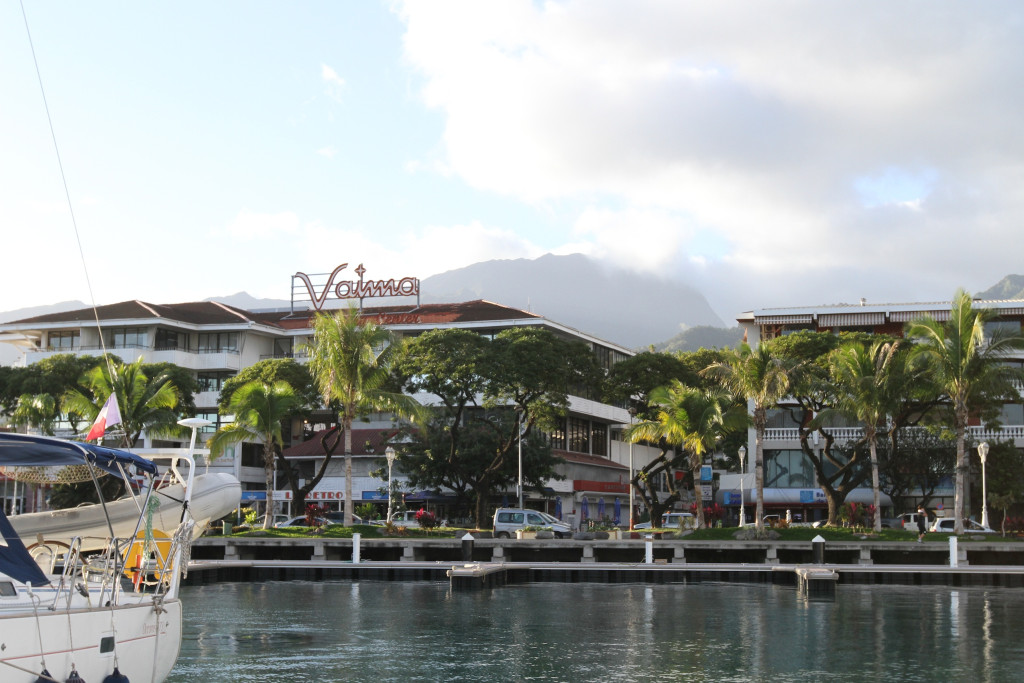 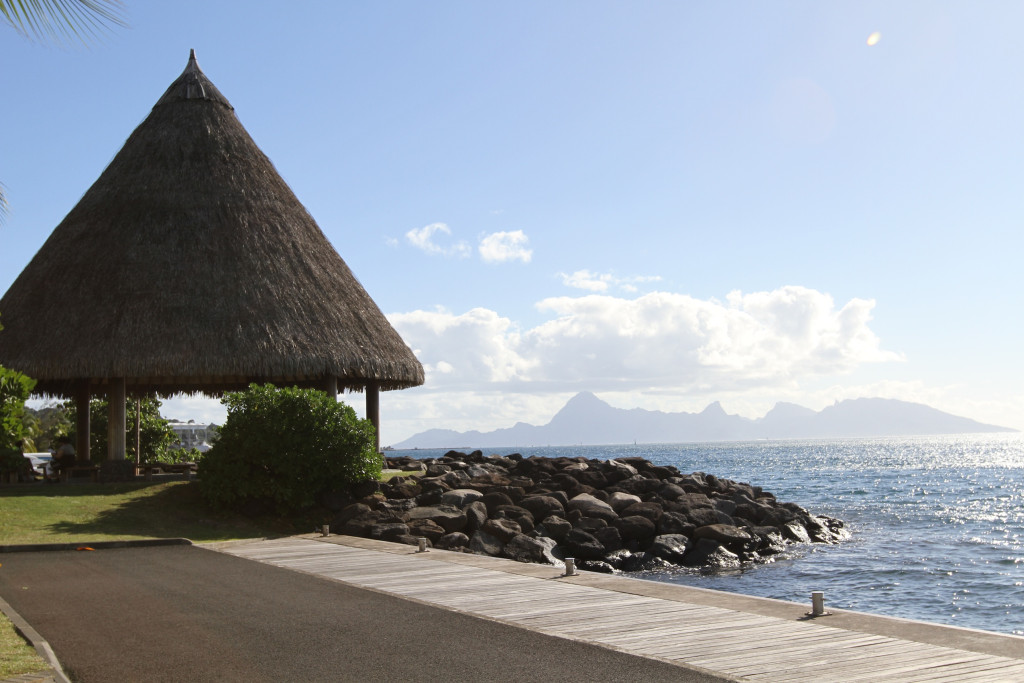 The waterfront at Papeete, with Moorea in the distance 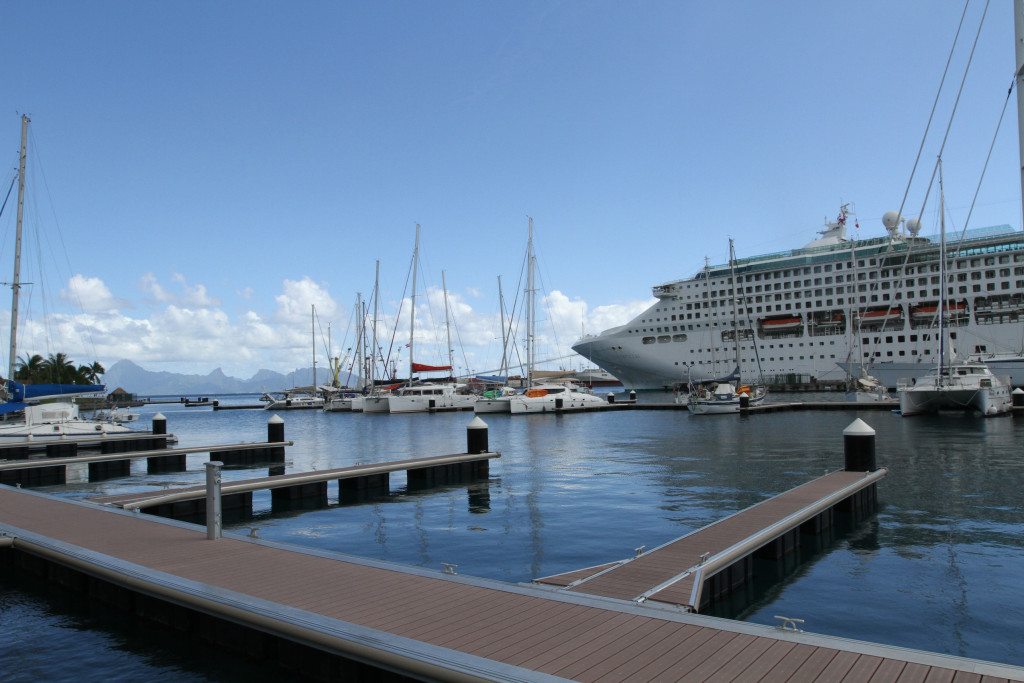 Toucan in the marina, dwarfed by the visiting cruise ship

While we were there we had an interesting neighbour arrive (in addition to the big cruise ships) – this was M5 (previously Mirabella V), at 75metres the largest single-masted yacht in the world, currently owned by a Texas oil billionaire. Complete with its’ own seaplane on the aft deck! 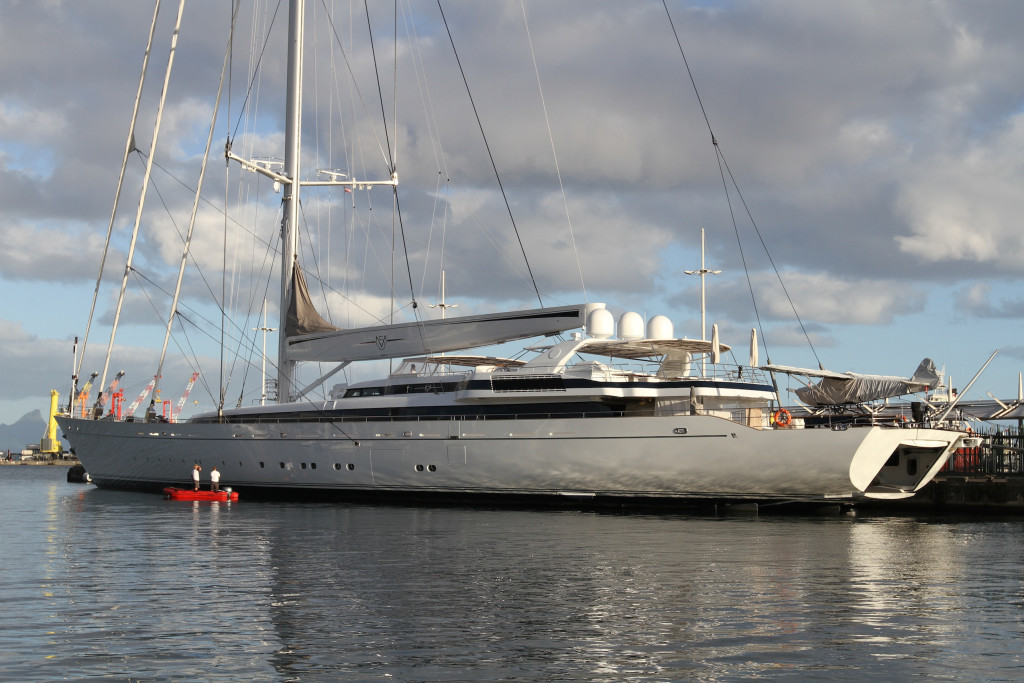 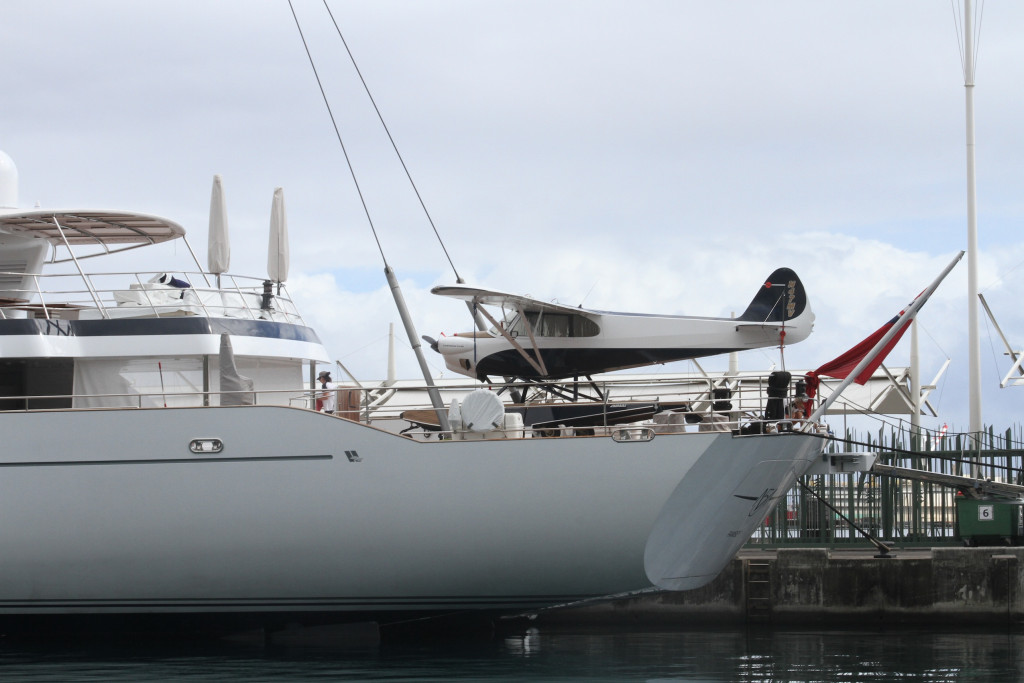 complete with seaplane on the aft deck 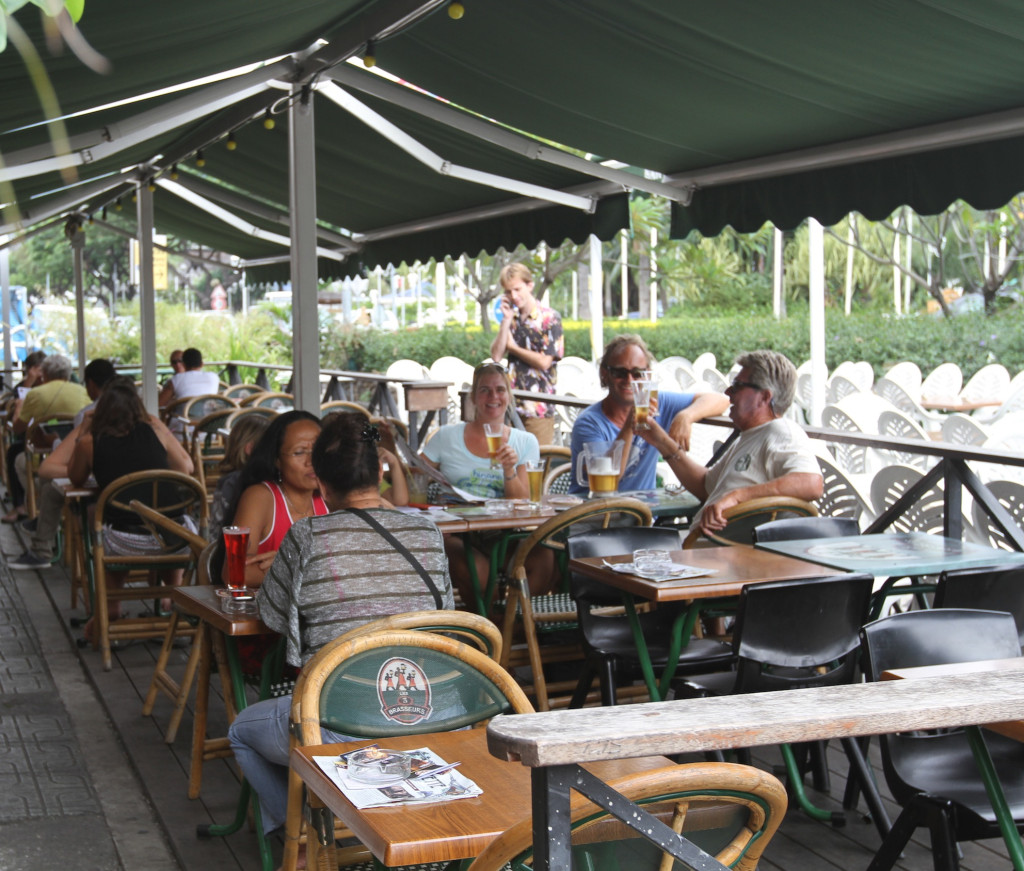 We also frequented the famous roulottes for dinner – mobile cafes that set up around the waterfront plaza each evening, offering seafood, pizza and Chinese fare. A little more sophisticated than Harry’s Café de Wheels and certainly more delicious – the tuna tartare is a speciality, and Bruce had the best wonton soup ever. 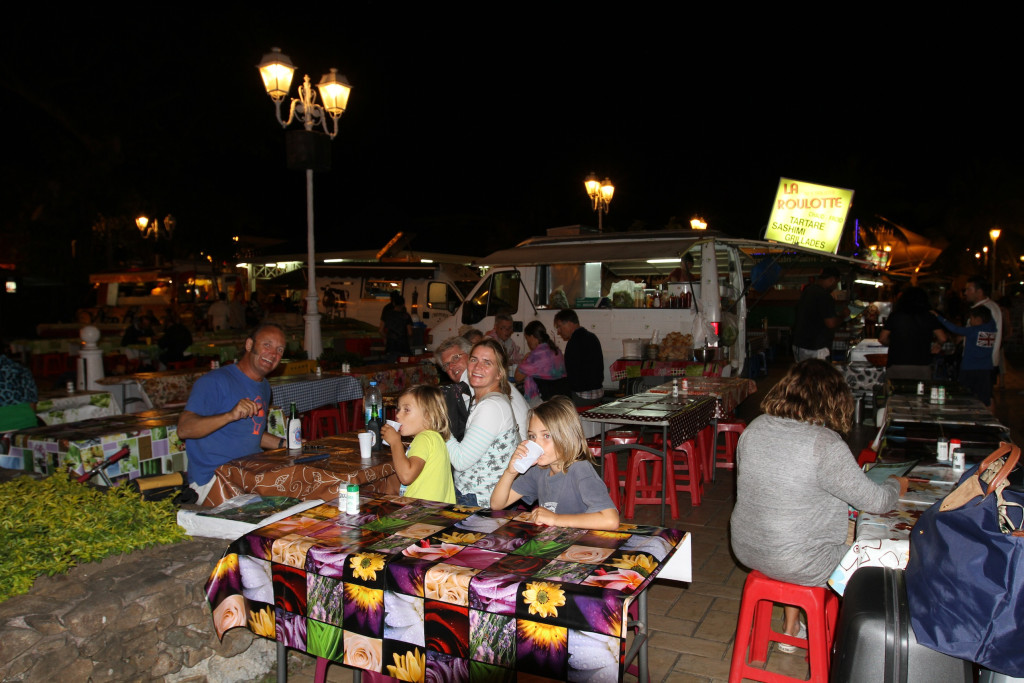 The other highlight was the market, filled with crafts, flowers, fresh veggies and seafood.  We spent a very pleasant couple of hours there browsing all the stalls and stocking up on fresh produce. 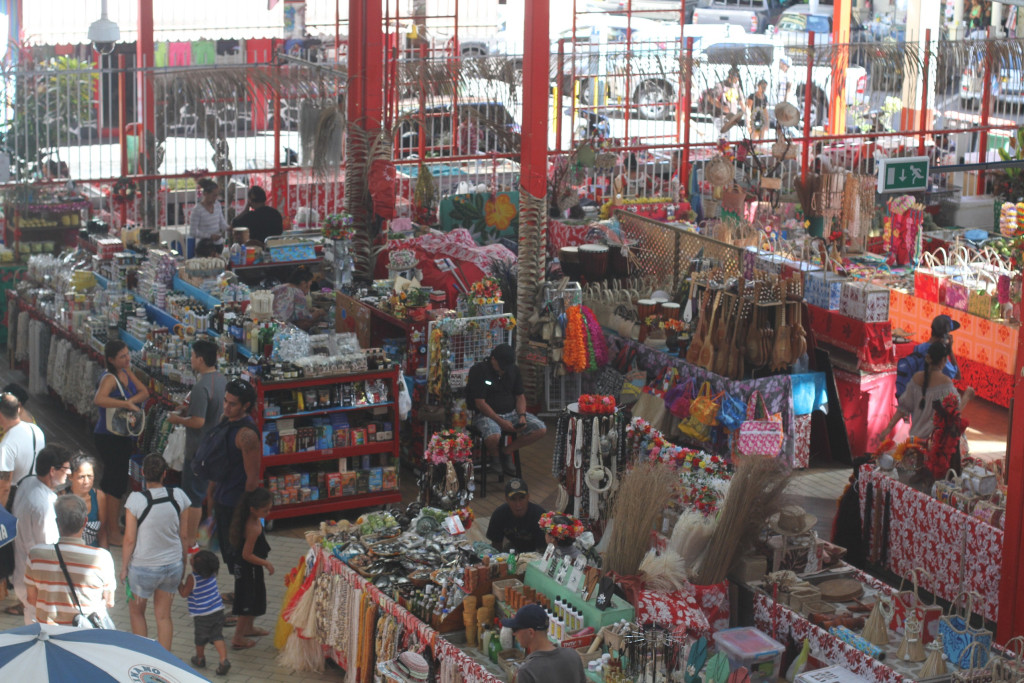 We’re now back in the anchorage at Marina Taina having done our last provisioning, filled the LPG bottles, filled the fuel tanks (at least we can get duty-free fuel here) and feeling just a little bit tired and cranky after the last two weeks of frantic activity. So we’re definitely looking forward to saying goodbye to Papeete today and heading to Moorea, only 15NM away but hopefully a world away from the hustle and bustle. 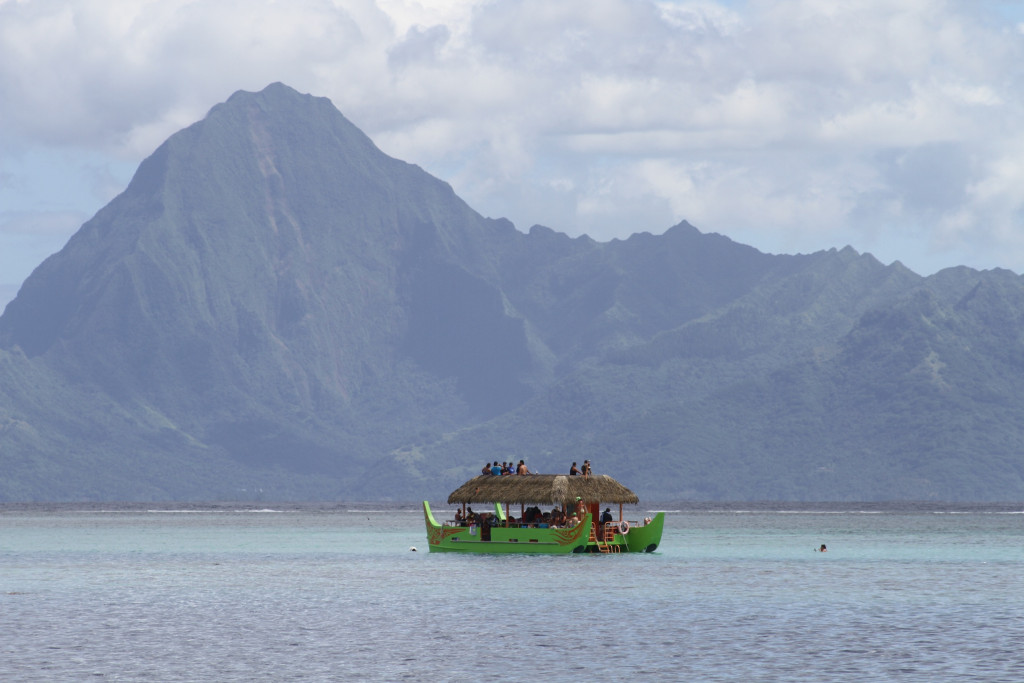 locals enjoying a Sunday outing, with the island of Moorea in the background