A Whale of A Tale – Moorea, French Polynesia 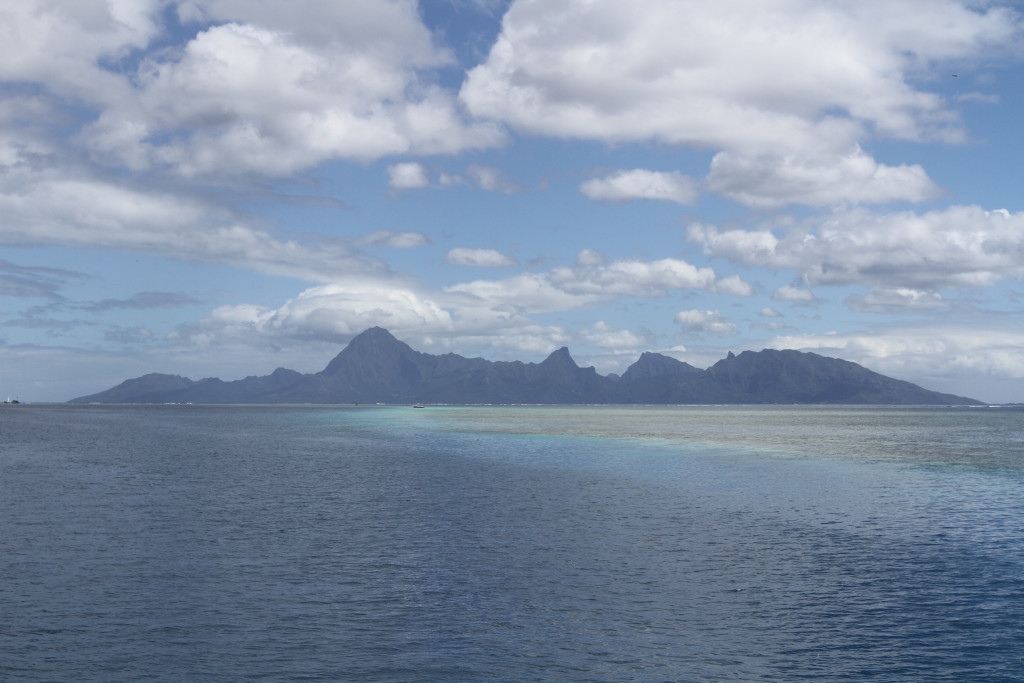 Moorea is another one of those stunningly beautiful French Polynesian Islands – from a distance. Up close we have to say it was a little disappointing. We were hoping it would be more relaxed than Tahiti, but it was too commercialised and touristy for our liking – too many big hotel complexes, too many jet skis (oh, how we wish they’d invent an Olympic sport of skeet-shooting jet-skis), but nothing can take away from the simply stunning scenery. 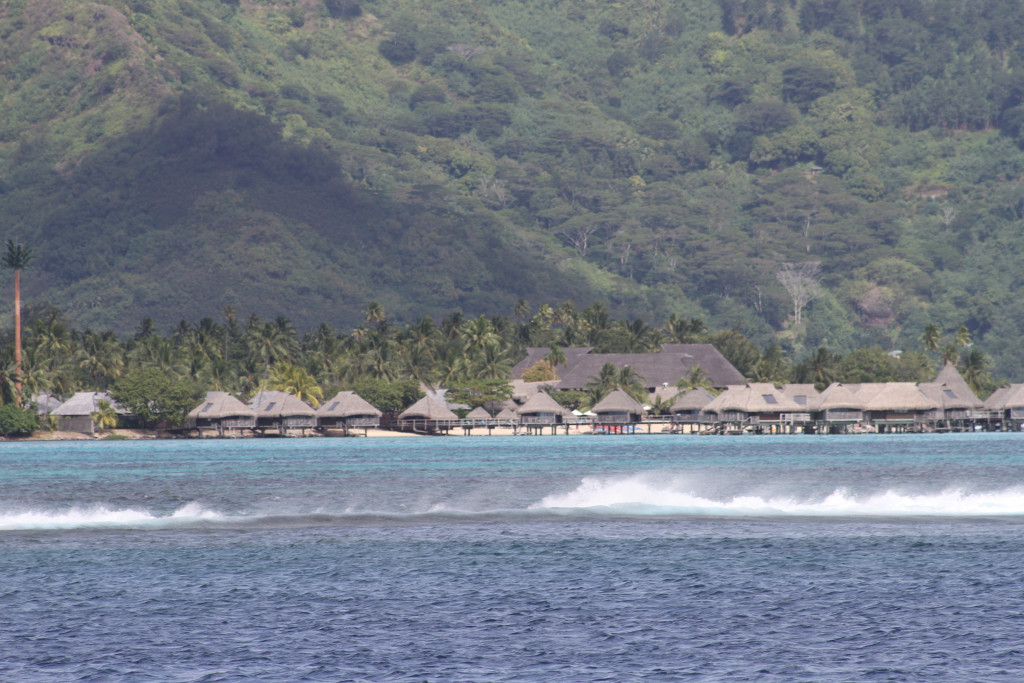 lots of bures behind the reef in Moorea 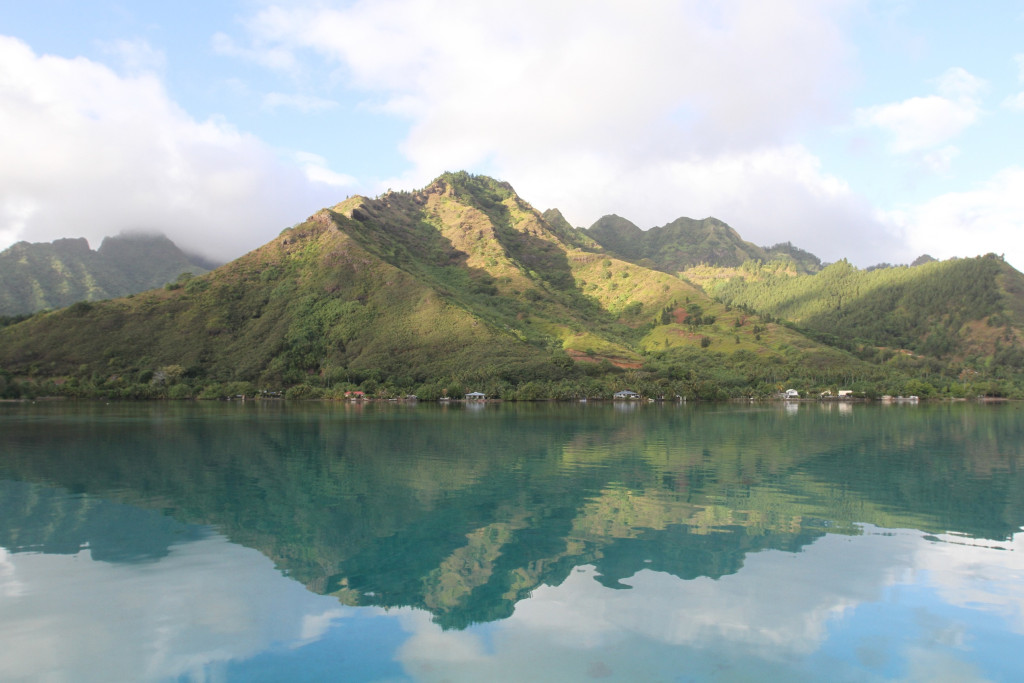 The north side of Moorea

There are two big, deep bays on the north side of the island, Cook’s Bay and Opunohu Bay. When we arrived at Cook’s Bay there was a big cruise ship slap bang in the middle of the bay which immediately put us off – we motored past down to the head of the bay but it was all a bit gloomy and dark with lots of weed in the water so we went back to the entrance and anchored behind the reef on the western side, which was much more pleasant. 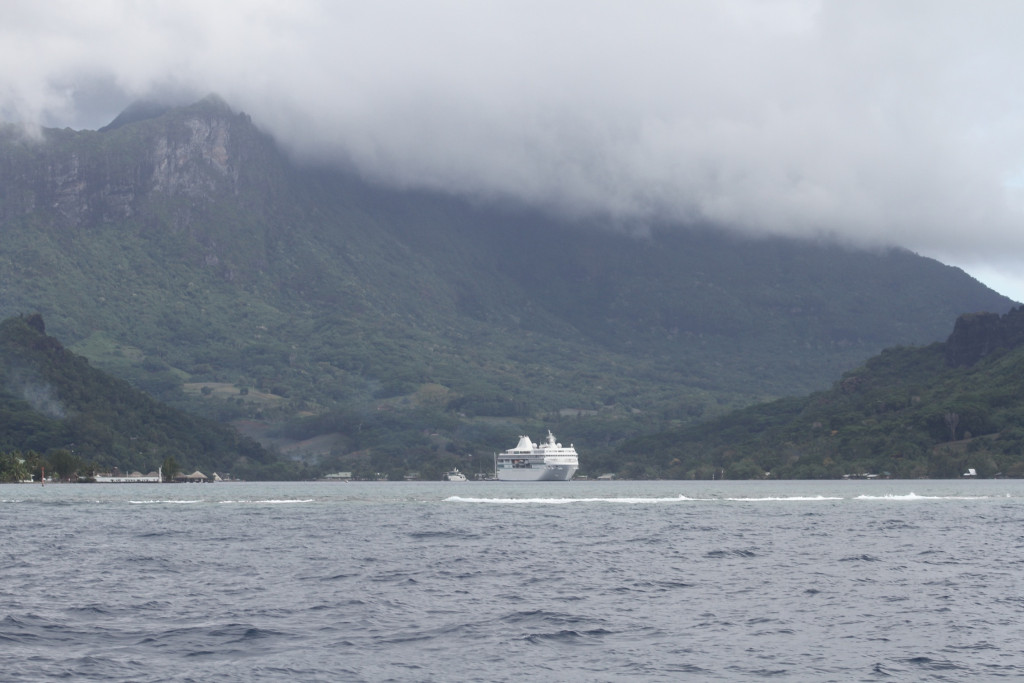 The weather wasn’t great – overcast and squally, but the next morning the skies cleared and we decided to motor round to Opunohu Bay. Boys being boys, the captains of Rehua and Toucan thought it might be fun to see if we could access Opunohu Bay via the small boat channel inside the reef – after a few minutes it became clear that the Boys’ Own Adventure was doomed – it was far too shallow! So we motored outside the pass and around into the next bay where we found a protected little anchorage up a short channel on the western side of the bay. 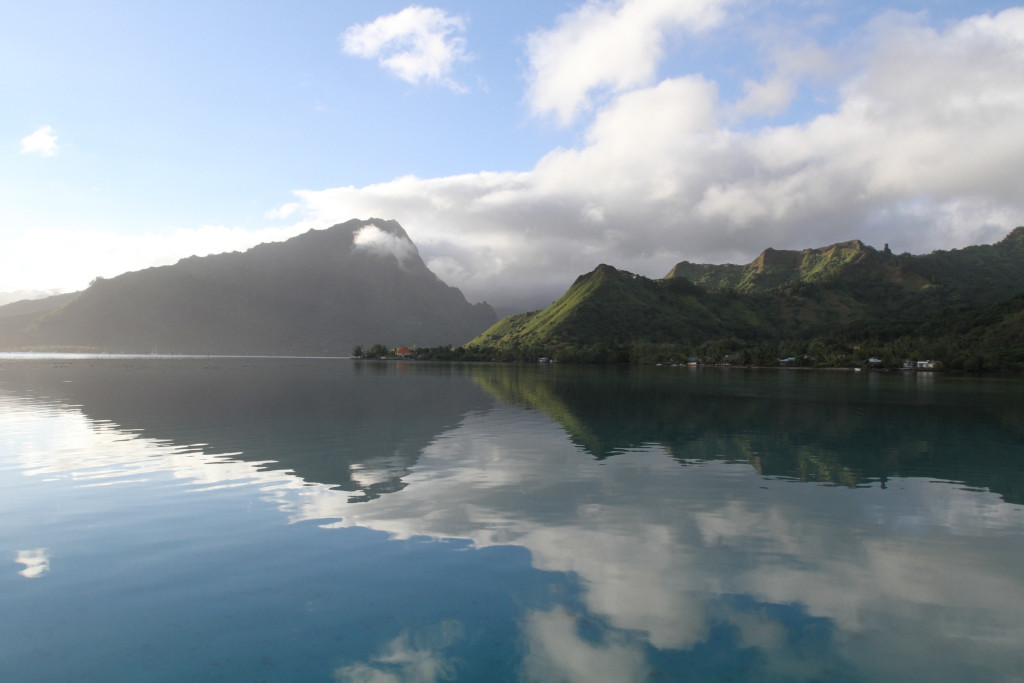 We didn’t get to do any shore-based activities on Moorea, mainly because it was quite tricky finding a suitable place to land the dinghy that wasn’t hotel or privately owned property. Instead we amused ourselves by visiting “Stingray City” – a shallow sandbar just west of the Intercontinental hotel where the stingray are hand-fed by guides on the tourist boats. We tried to get there early before all the tourists arrived but even so we had one group arrive soon after us and several paddleboarders. It was a fun experience nevertheless, the rays are very tame (and we’re pretty sure their stingers have been removed) so we were able to snorkel with them and give them a pat. We weren’t too sure about feeding them after we saw the reef sharks circling the perimeter – we thought we’d leave that to the guides! 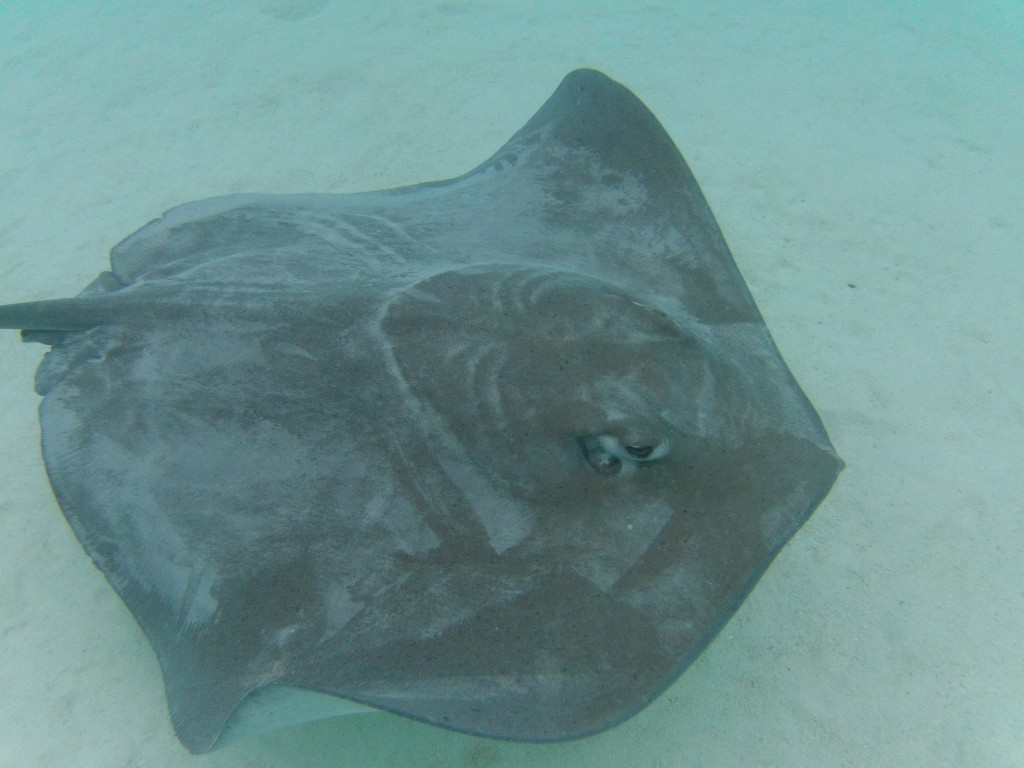 Up close and personal with the rays

We also had a very pretty spotted eagle ray that cruised around under our boat most of the time we were there:

Just behind our boat was the underwater Tiki sculptures made of stone. Apparently the Tahitian artist thought up the idea as a response to the early missionaries actions of throwing the wooden tikis into the ocean. 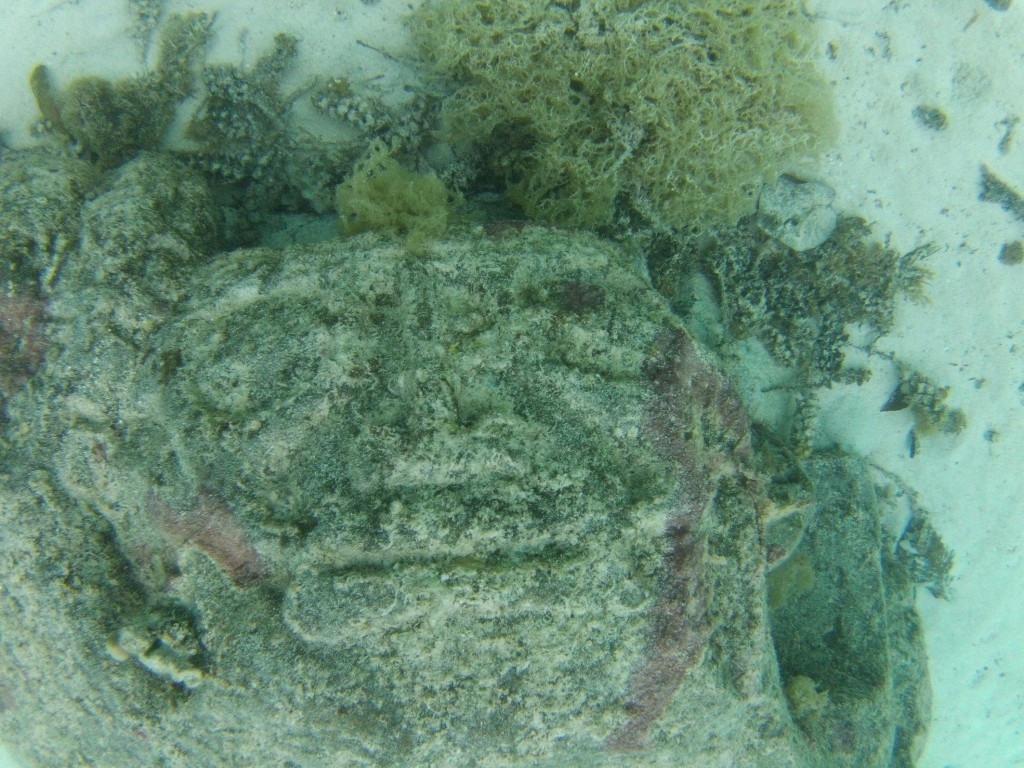 Bruce, Audrie and I also did a dive on the outside of the pass – but after the crystal clear waters of the Tuamotus it was a bit underwhelming. There was plenty of fish life and a couple of reef sharks, and it’s always nice to blow some bubbles but I’m looking forward to the more colourful corals that hopefully we’ll get to see further west in Fiji and Vanuatu. 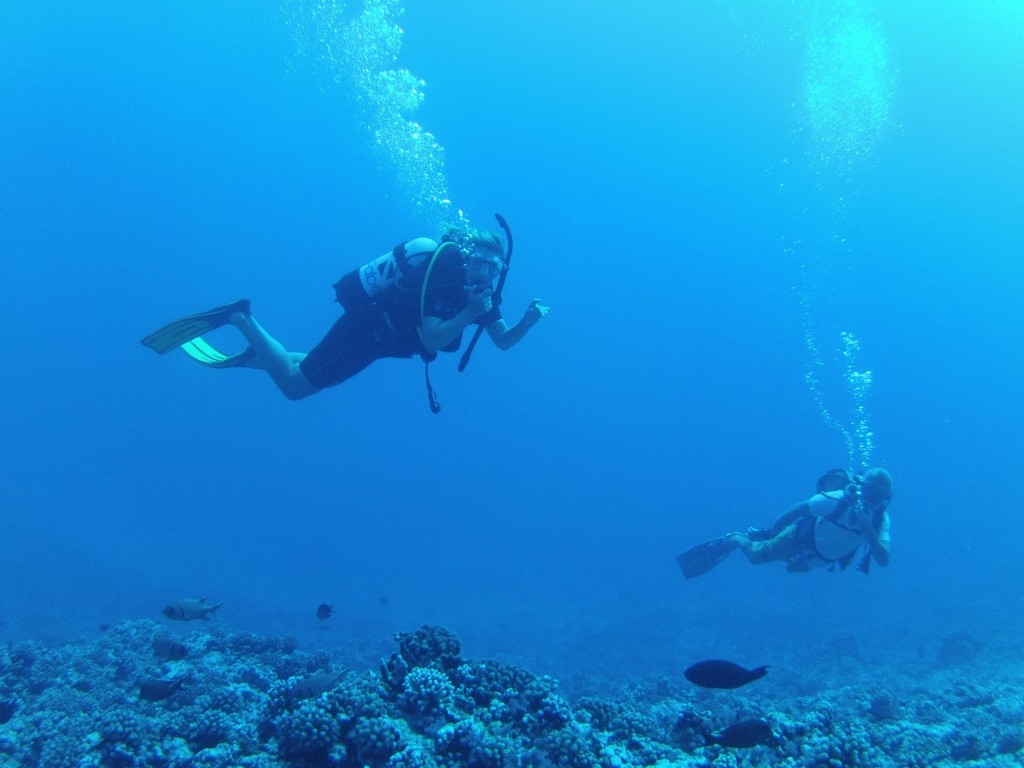 Audrie and Bruce on the reef at Moorea

The saga of our VHF radio continues – our reception has been very poor ever since we’ve had the boat and we were pretty sure it was the old, cracked handset. So we had a new one shipped in while we were in Tahiti and Bruce installed it. Sadly it didn’t change things at all, so the obvious conclusion was that it was either the aerial on the top of the mast, or the cabling, or both. We decided to replace both to be safe so another boat job in Moorea was going up the mast to complete the job. We had the assistance of Seathan from Rehua, which was great, but as usual a simple job turned into a complex one when we couldn’t pull the old cable out of the mast – it seems some idiot must have cable-tied it inside the mast when it was first installed. So we had to cut it and then mouse through a new cable. After all that work we’re now keeping our fingers crossed that we’ll have perfect transmission and reception over longer distances but we won’t know until we’re at sea again.

The highlight of our stay in Moorea was a visit by a very unexpected guest in the anchorage – a juvenile humpback! We’d seen quite a few whales off Tahiti and on the way to Moorea, but never one quite this close. He popped up literally at the back of Rehua and then made his way around the very small anchorage area seeking a way back out to the ocean. I was in the water at the time cleaning our hulls, so I grabbed the camera from Bruce and snorkelled over to get a closer look. Sadly the visibility was very poor, but I was probably within about 20 metres of him, what an absolute thrill to see such a gorgeous creature close up. The good news is he found his way back out through the channel, hopefully to be reunited with mum- no doubt very cranky with him for getting lost! 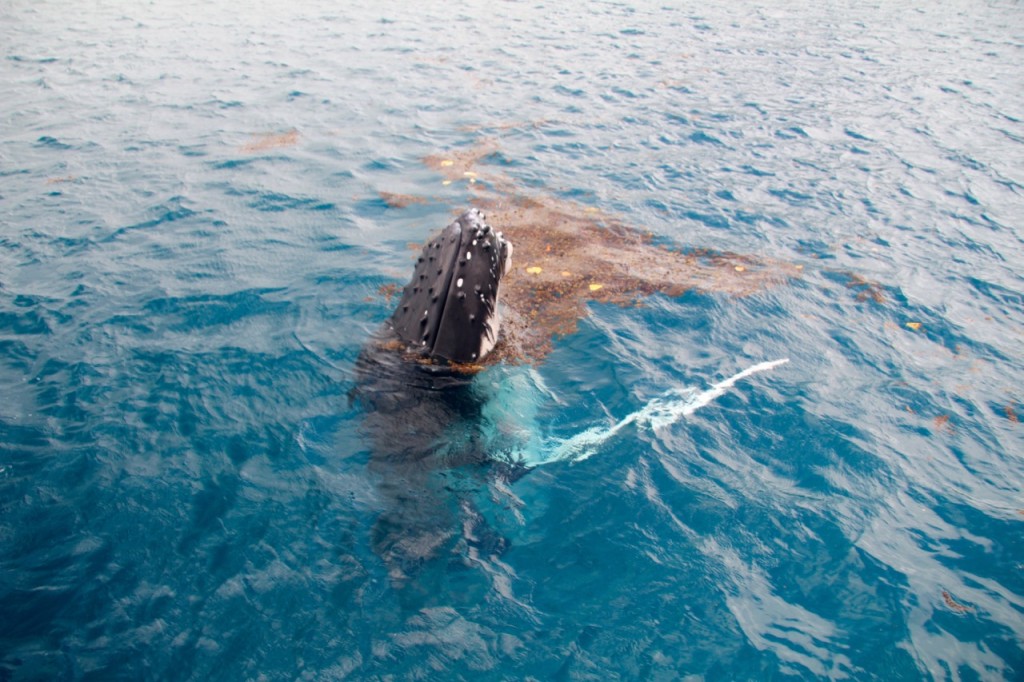 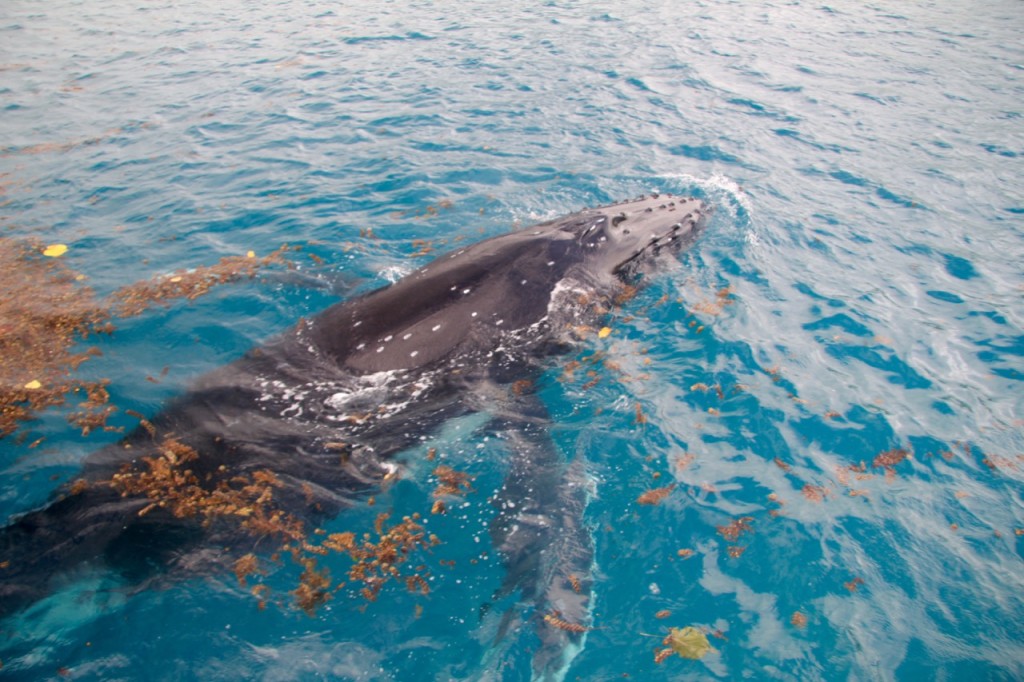 Right next to Rehua (photo courtesy of Audrie & Seathan)

A nice ending to our time in Moorea.  Now it’s time for an overnight sail to the next Society Island, Huahine, 76NM away.

4 Responses to A Whale of A Tale – Moorea, French Polynesia