The day before we reached Aitutaki, we had a little celebration when our log clicked over to 10K, the number of miles travelled since we left Annapolis last October. But Huey the wind god really made us work for these last 500, he wanted to make sure we knew who was boss out here….

We left Bora Bora with a good strong south-easterly and fairly rocketed along for the first 24 hours under two reefs and a scrap of headsail, making 9-10kts. Unfortunately the large 3 metre south-west swell mixed with the SE wind waves made for a sickening corkscrew motion, and for the first time in a long time made me feel quite queasy. Despite being well-reefed down, it was a noisy and stressful 48 hours as the boat got slammed and pounded by the waves. I was very glad I’d pre-cooked some meals for this passage as there was no way anyone would be playing with knives in the galley! The forecast was for the wind to lessen and become more easterly as the high pressure system established itself. I had visions of being able to get the spinnaker up, but it was not to be. Instead, the high moved through much more quickly than forecast, so we ended up ‘boxing the compass’ – we had wind from every point of the compass during the next few days as the high faded and the trough moved in, bringing strong squalls and rain. Our track looked like a madwoman’s breakfast as we tried to adjust to the wind shifts and yet not sail too far away from Aitutaki. Finally the trough passed, the skies cleared and we had a glorious last day’s sail. But now we were going to arrive too early! So we slowed the boat down and had a very easy, pleasant last night at sea under the brilliant stars, arriving off Aitutaki as dawn was breaking, three and a half days after leaving Bora Bora. We had a few hours to kill before high tide at 9.30 so we had a leisurely breakfast watching humpback whales breaching in the distance, and then started our approach to the narrow, shallow reef pass, one of our more challenging entrances so far. 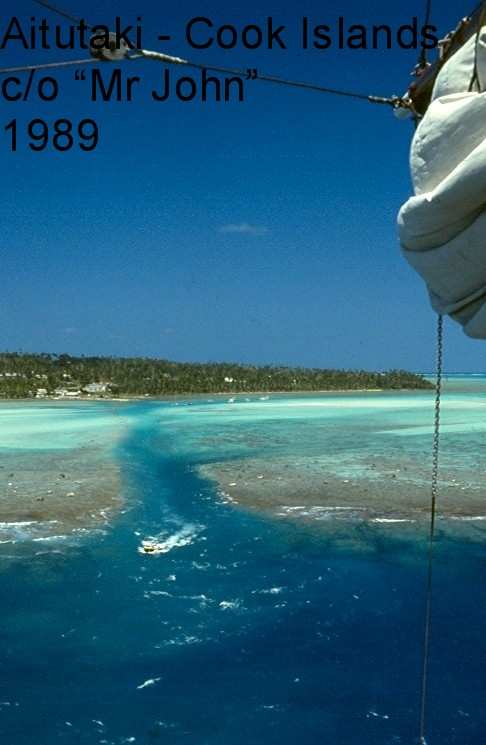 The entrance is only 30 ft wide and we’re 24 ft. Yikes!! No room for error here. As we approached the waves were crashing onto the reef just beside us and there was a fair bit of turbulence, but Bruce powered up the engines and suddenly we were through and into the relative calmness of the channel. I wish I’d thought about turning the Go-Pro on – maybe on the outward passage! About half-way down the man-made channel there’s a shallow sandy spot where our depth gauge read 0.00! But thankfully we didn’t bump and gingerly made our way down to the small anchorage in the harbour. This is also shallow, with a maximum of 8-9 ft and murky, making it hard to see any hidden rocks or reefs. There was already one small monohull anchored with stern lines out to the palm trees so we followed suit, dropping our stern anchor as well for good measure. Because of the waves continually crashing over the reef on the southern side of the lagoon, there’s a continual outflowing current so apart from the lack of space you need to be anchored fore and aft to stop swinging. 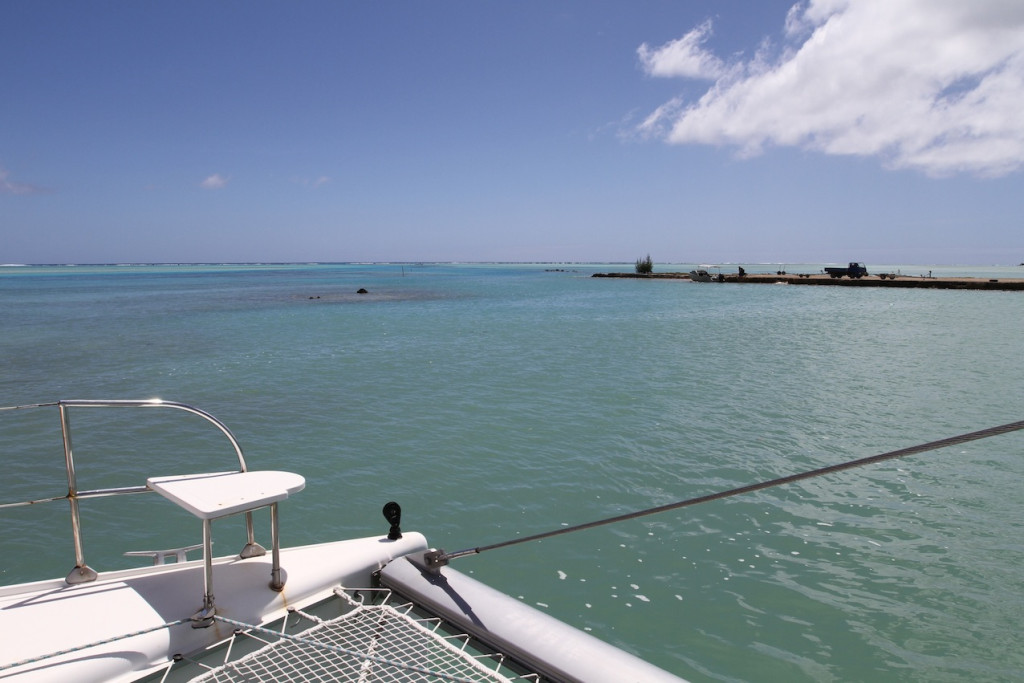 At anchor in Arutanga Harbour, Aitutaki 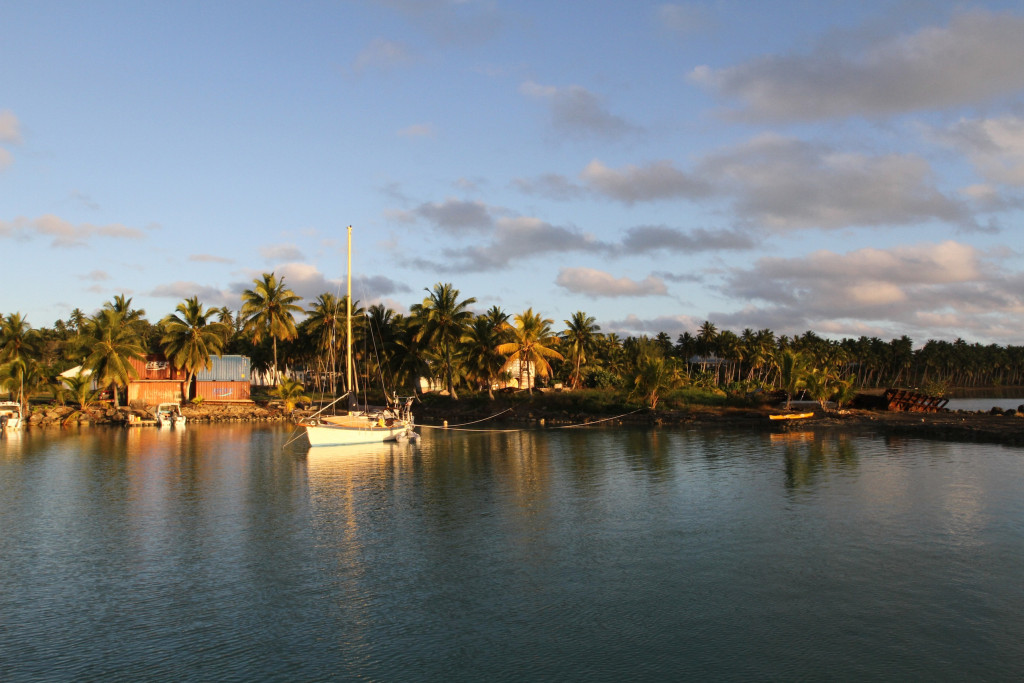 Our neighbour, Mic, on Calypso at Arutanga Harbour

We dinghied ashore and walked up to customs & immigration. What a welcome change to see a smiling face and hear a kiwi/maori accent! The bio-security guy and the health inspector said they needed to come out to the boat, so the four of us crammed into what now seemed like a toy dinghy. These guys are big boys! They did a cursory spray of the cabins and took our fruit, potatoes, onions and garlic, but didn’t check the fridge thankfully (I’d chopped up most of the fruit and made a fruit salad). They say there’s a Polynesian fruit fly that they don’t want here, so I guess it’s fair enough, except I haven’t found anywhere on the island that sells garlic. 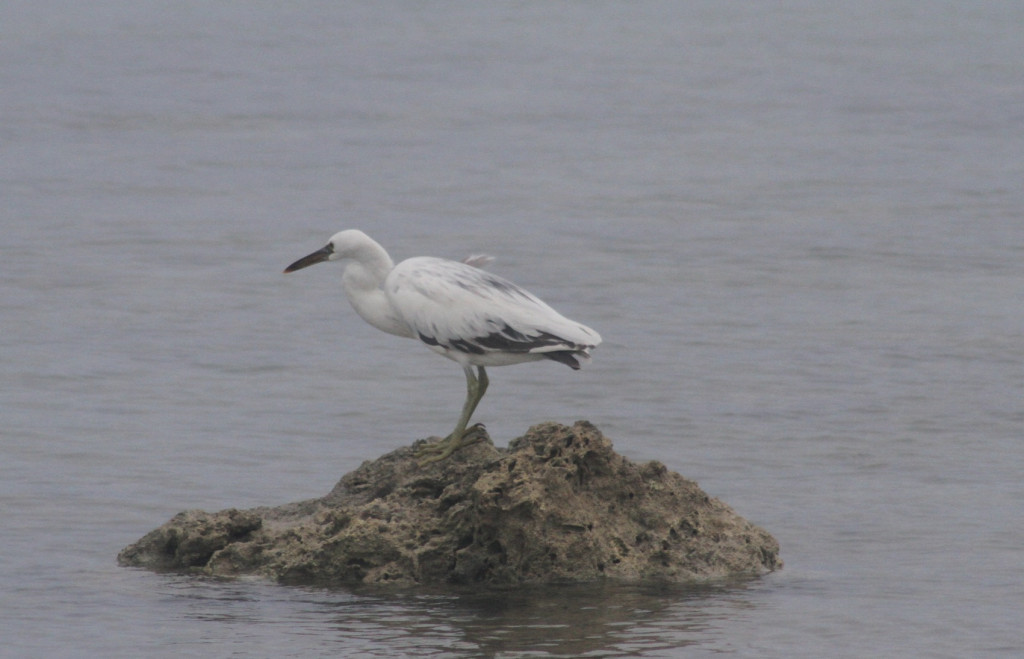 Local birdlife on the reef

After a few days the anchorage filled up, first with our buddy boat Rehua, and then two more monohulls. We’re like sardines in a can, with a spiderweb of lines ashore to keep us all from colliding with one another! 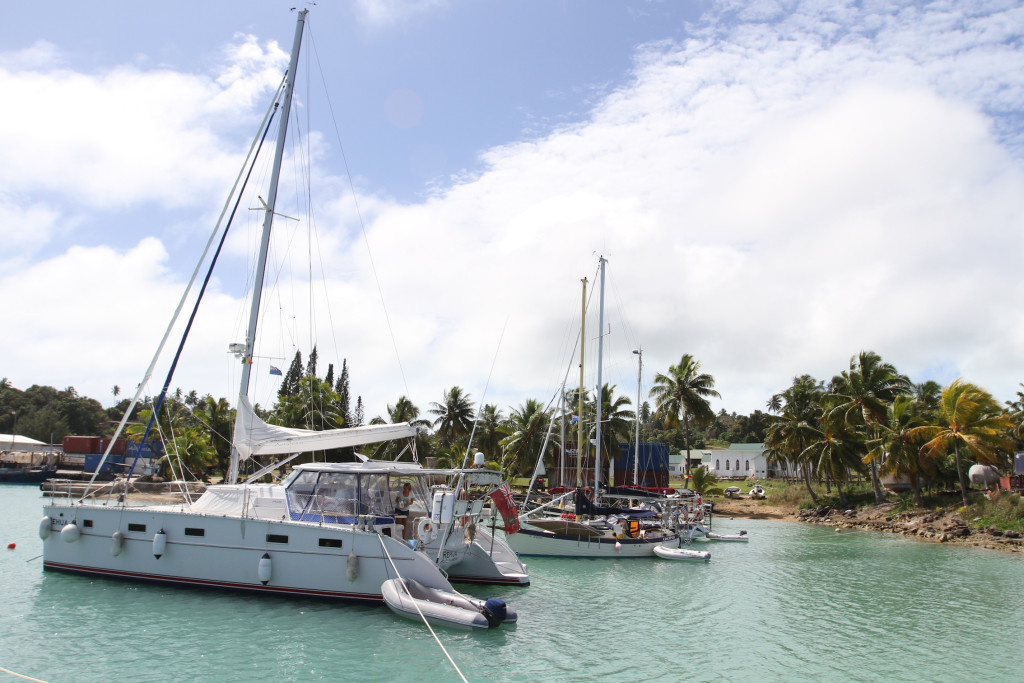 The gang’s all here – Rehua, Calypso, Music Fund and Vagrant. It’s almost a full house although the port captain says you can fit 10 boats in here! 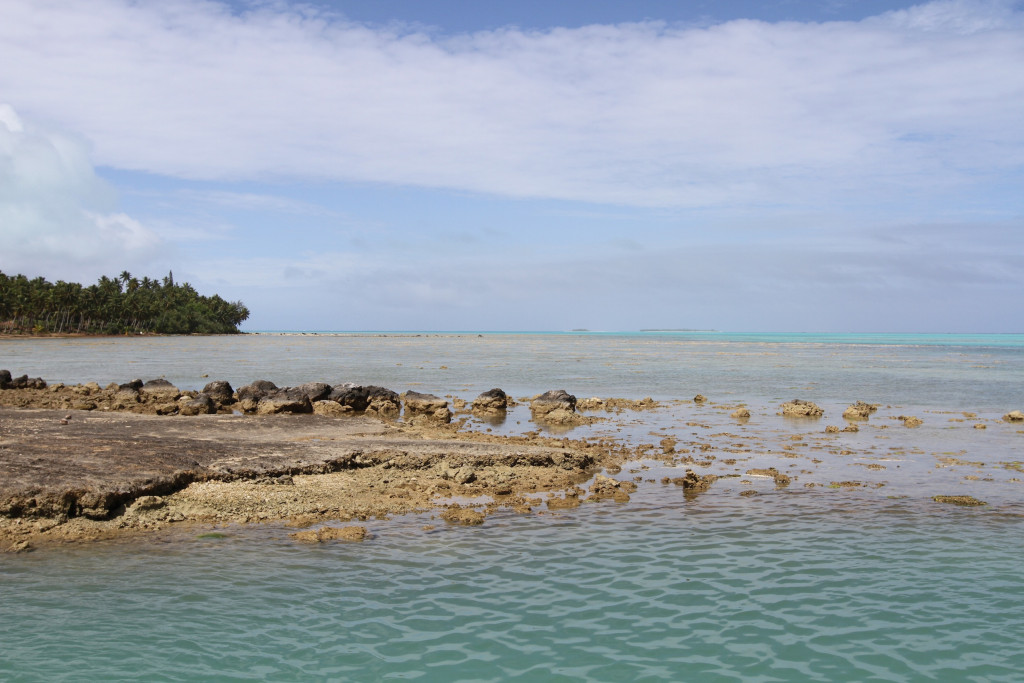 The reef just behind Toucan. Hope our anchors hold! 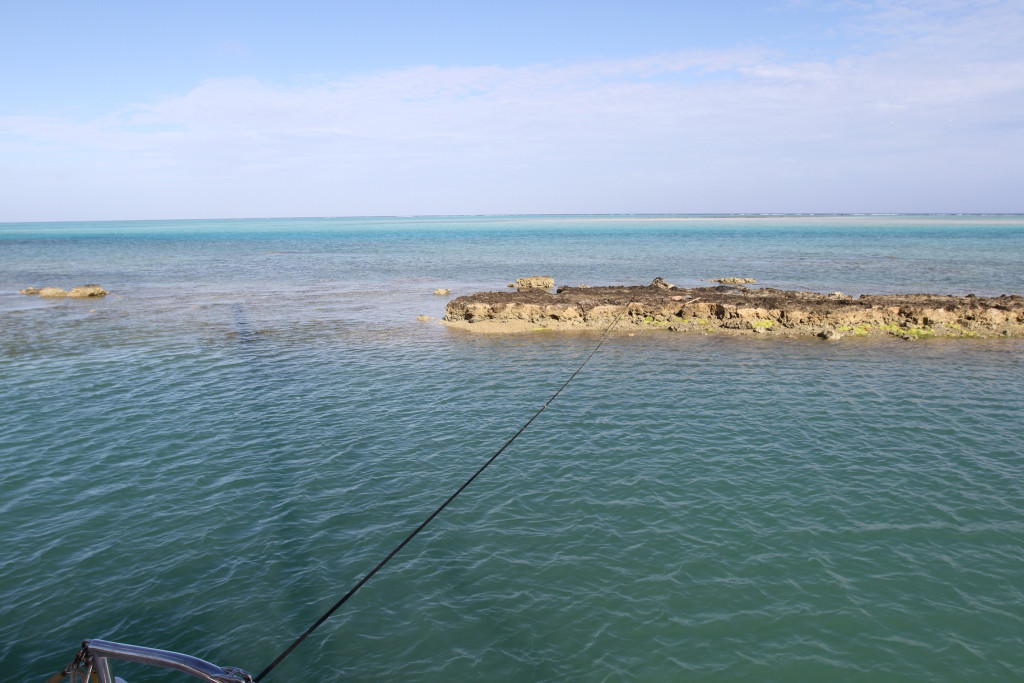 It’s a great little island with a laid-back, friendly atmosphere. There are a few resorts dotted around but they’re low-key and unobtrusive. Unfortunately cruising boats are not allowed to take their dinghies around the lagoon after some idiot speared the local, tame giant trevally. So instead we hired scooters with the gang from Rehua and had a lot of fun riding round the island, finding some nice spots for lunch and viewing the amazing scenery from the top of the lookout. 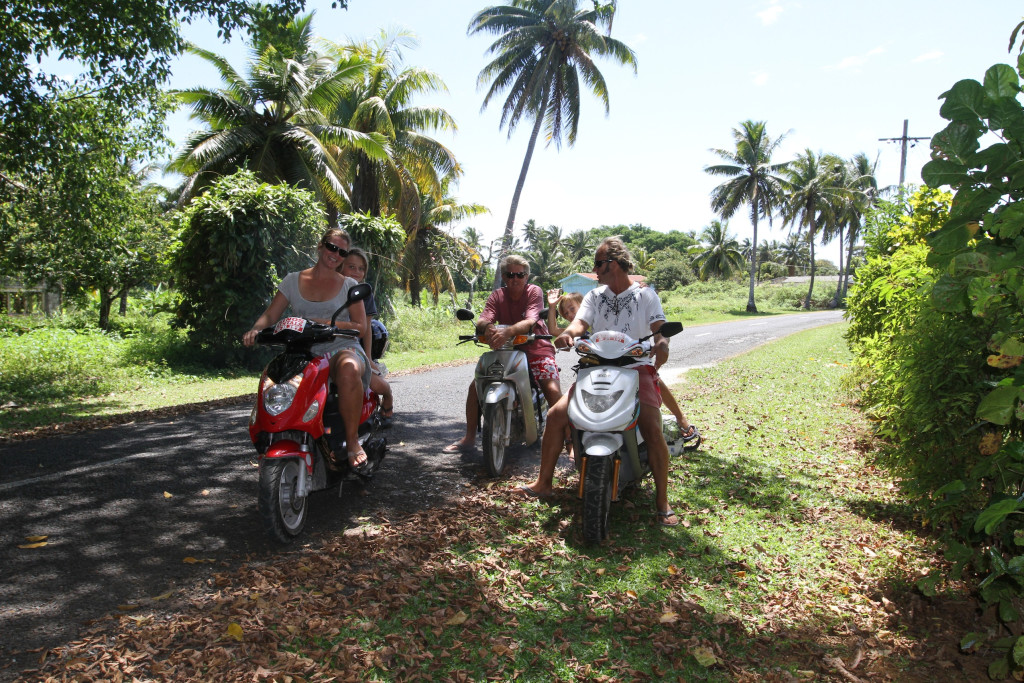 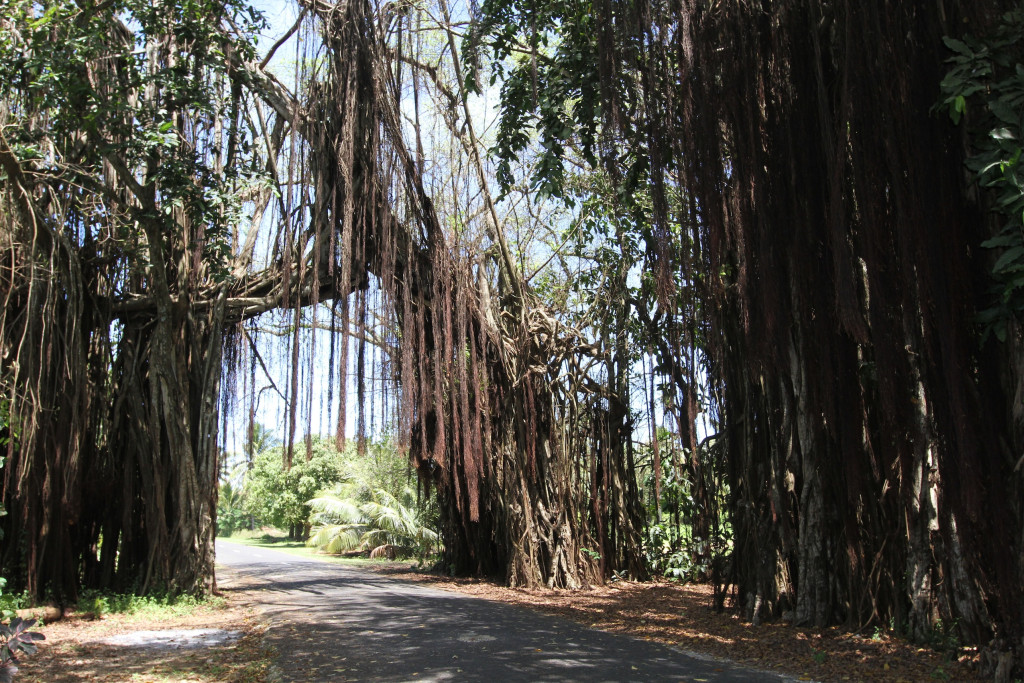 Giant Banyan trees on the island 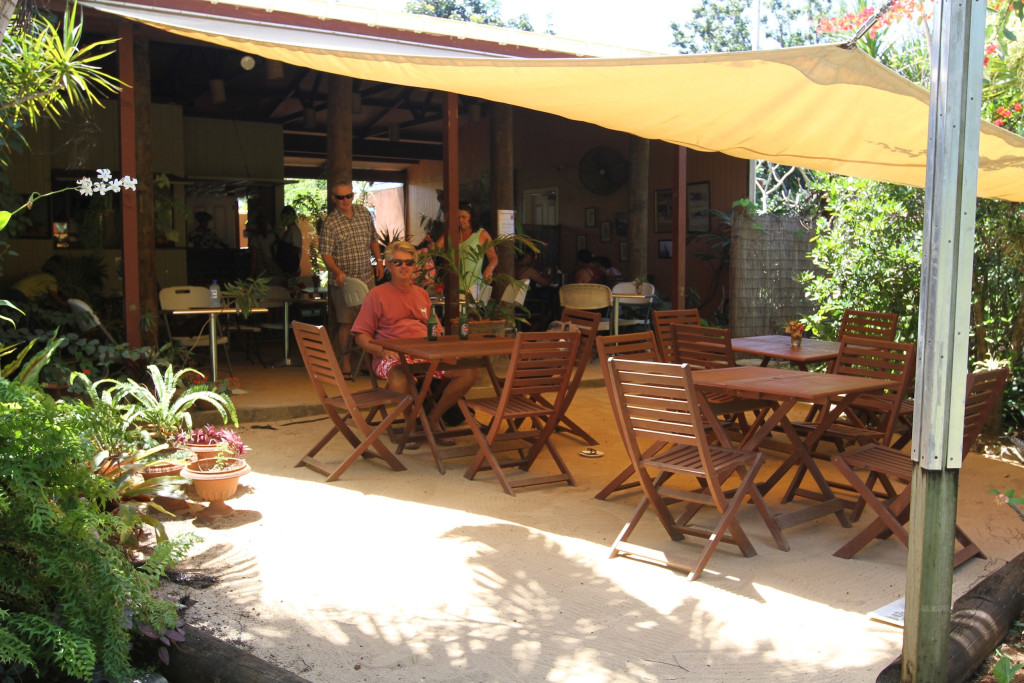 Cafe Tupuna, one of several nice dining spots on the island. but bring the mozzie spray! 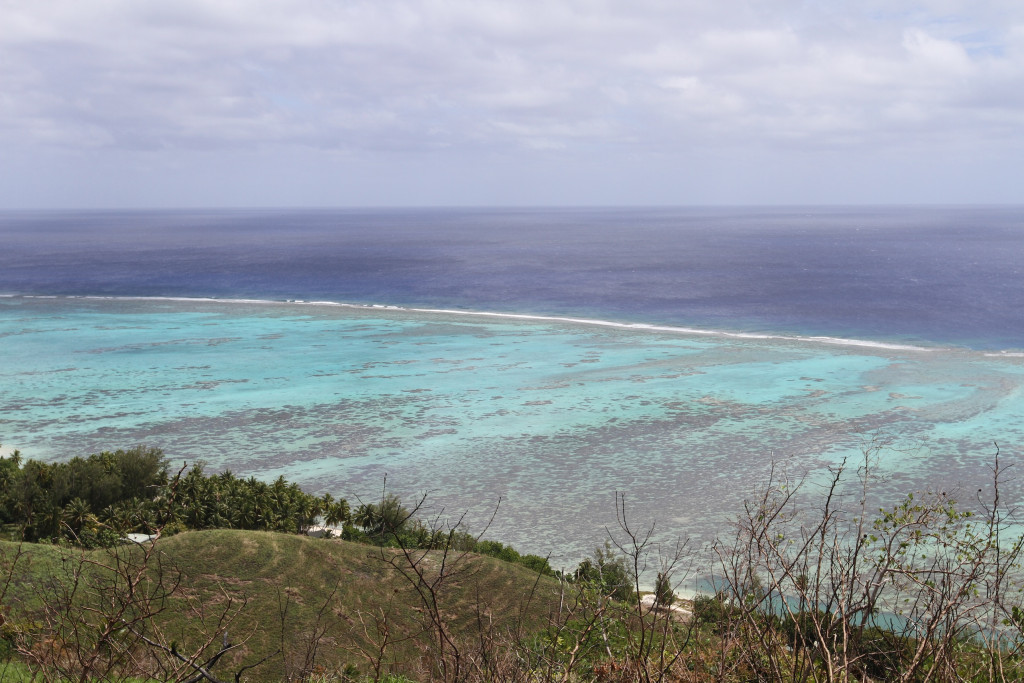 The view of the lagoon from the lookout. It’s very shallow! 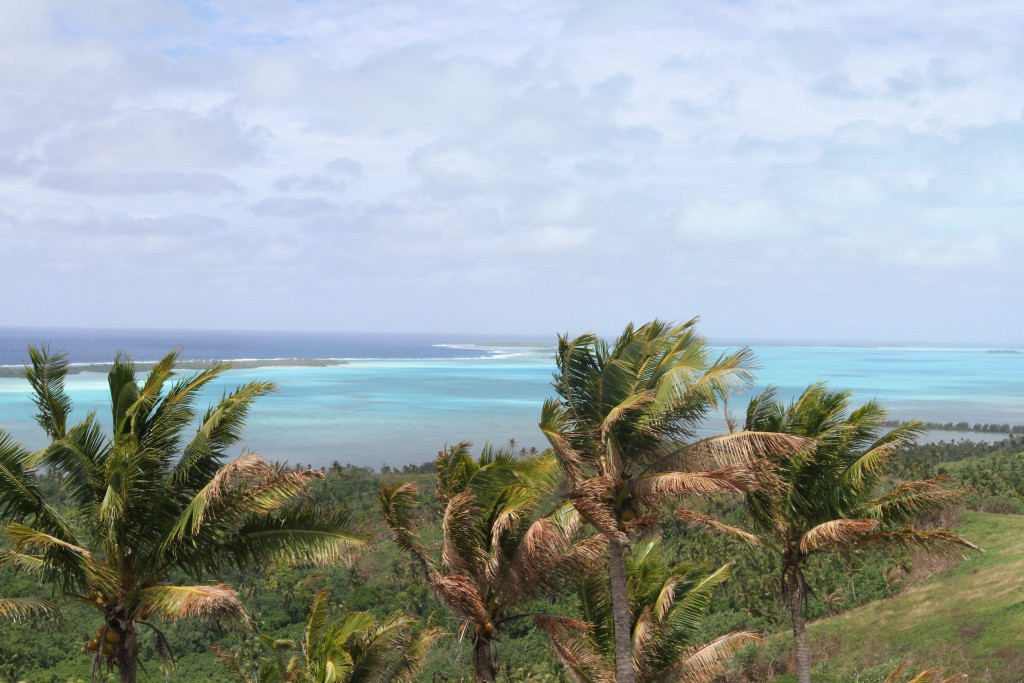 the Eastern side of the lagoon from the lookout 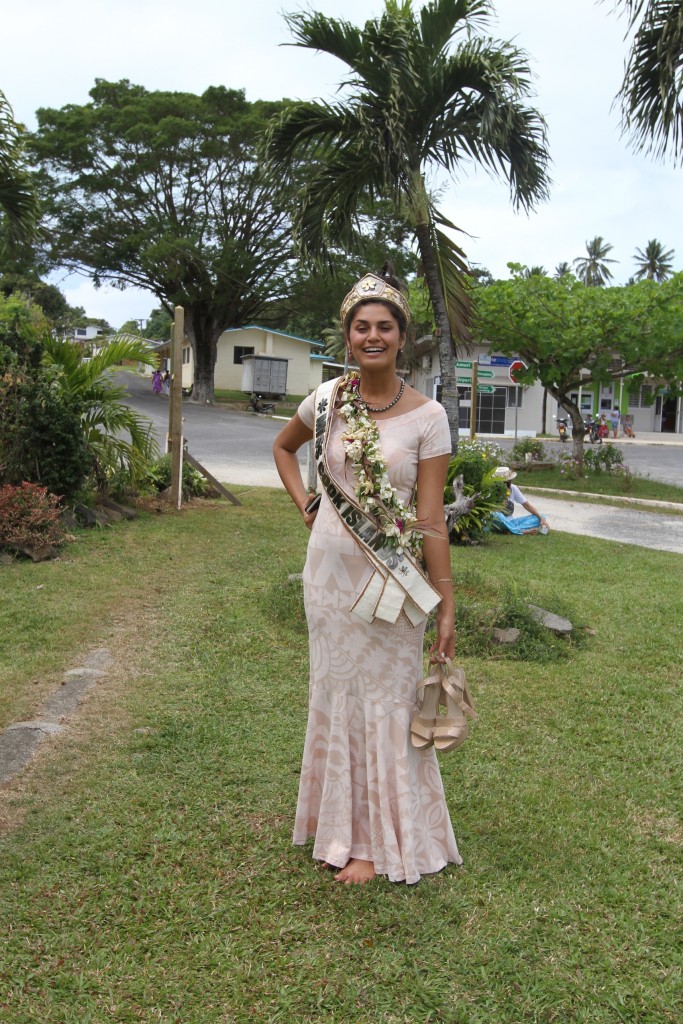 We also bumped into “Miss Cook Islands” on our journey. A lovely young lady from Aitutaki

Another highlight was the cultural show at Tamanu Beach Resort, where we were able to buy a drink at the bar instead of having to fork out the whole shebang for the buffet dinner. Mind you, I think we got the equivalent of the “B” team dancers, not many of them seemed to know the steps and there was a lot of laughing and dropped fire sticks! But boy, those hip movements from the girls are something else, what I’d give to be that flexible again! 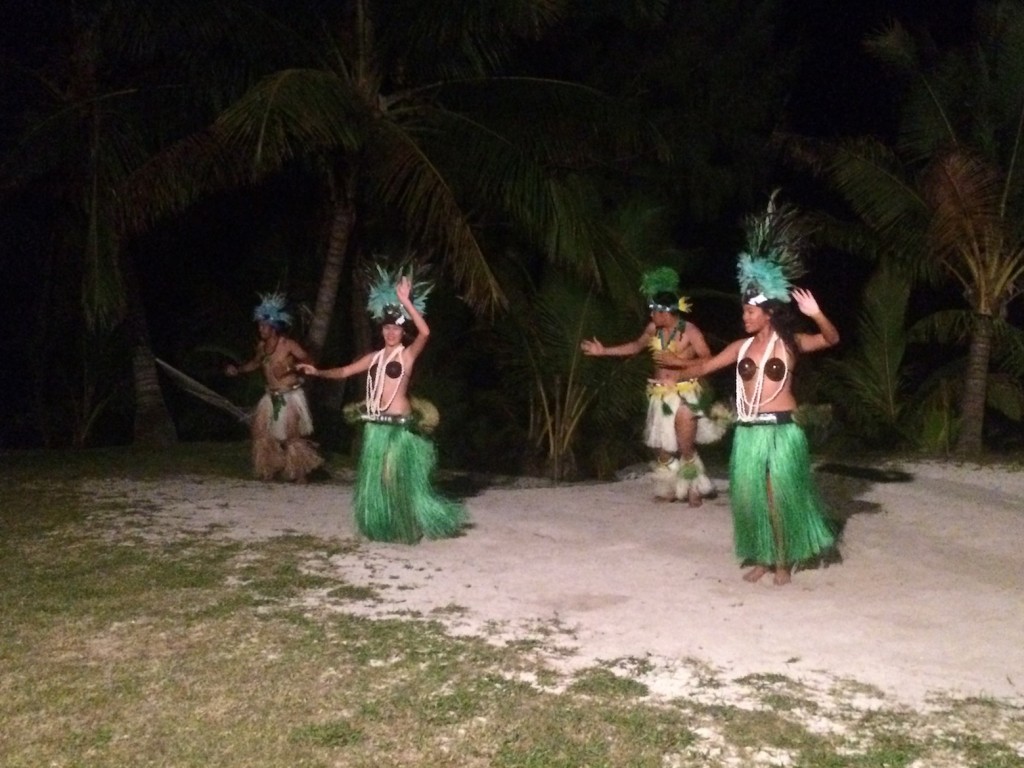 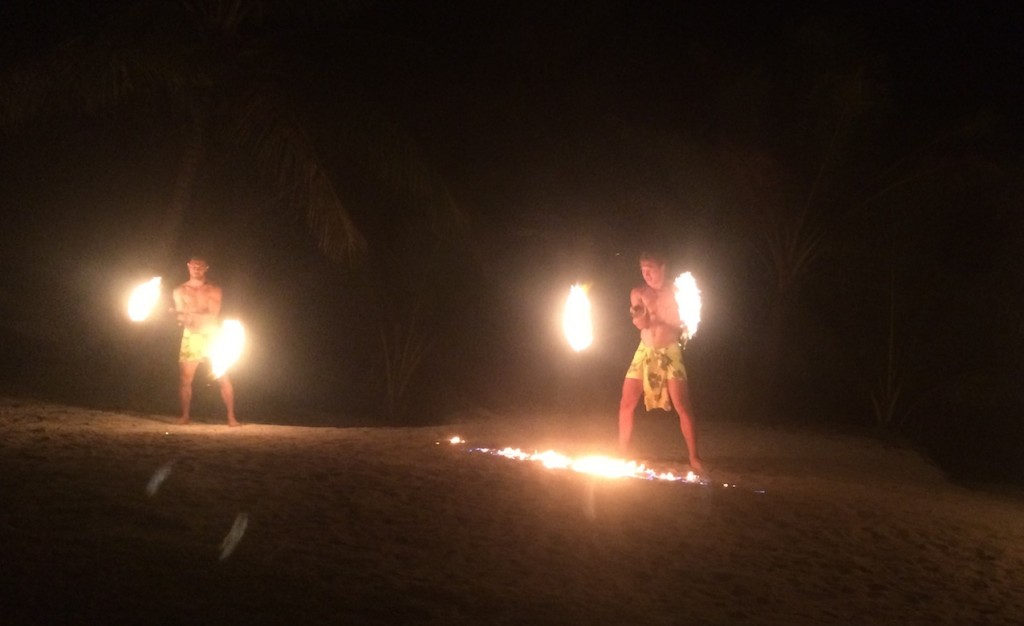 The church service on Sunday was highly recommended by other cruisers, mainly for the beautiful singing. The church was built in 1821 and is the oldest church in the Cook Islands. So Audrie and I and the boys dug out our smartest clothes (shoes! I haven’t worn proper shoes for months!!) and went along, the boys dragging their heels just a teeny bit. The women were all decked out in their finery with colourful straws hats, and the acapella singing was indeed very beautiful and stirring, with soaring harmonies. However, after an hour and a half it was more than enough for us, so with our halos shining we returned to the heathens on the boat, who were enjoying a quiet Sunday morning beer. 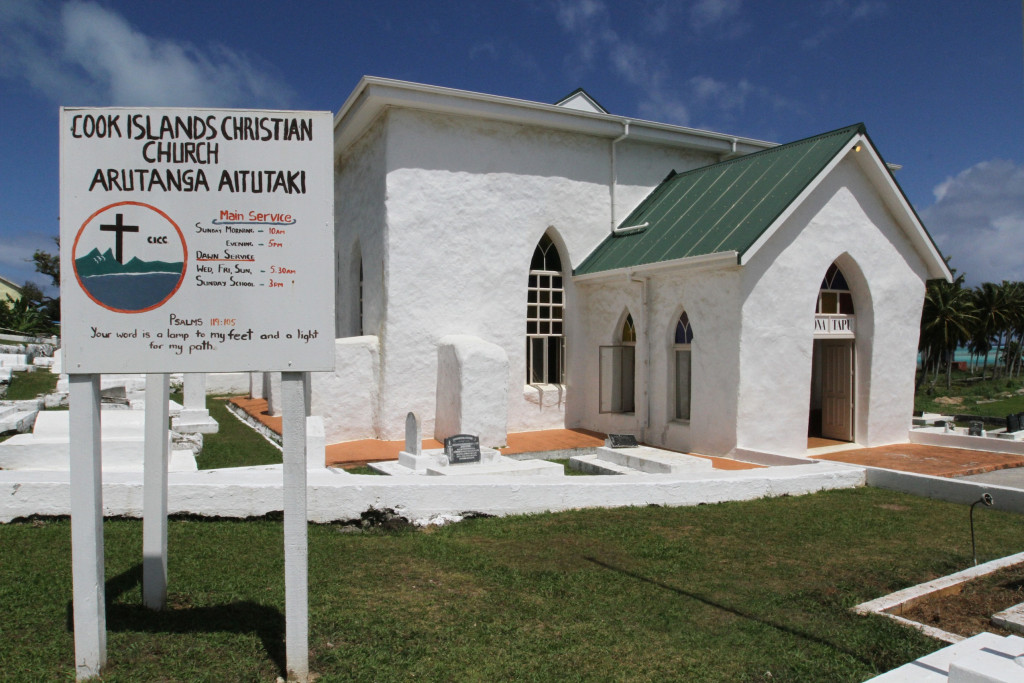 During our stay we bumped into another Aussie family holidaying here at the Pacific Resort. Jason and Sophie have been coming here for the last 10 years and so were able to show us some of the best snorkelling and dining spots and we all had a great time together. They also invited us to the resort and after a bit of argy-bargy with the manager, the boys were allowed to swim in the pool with their new friends, much to their delight. 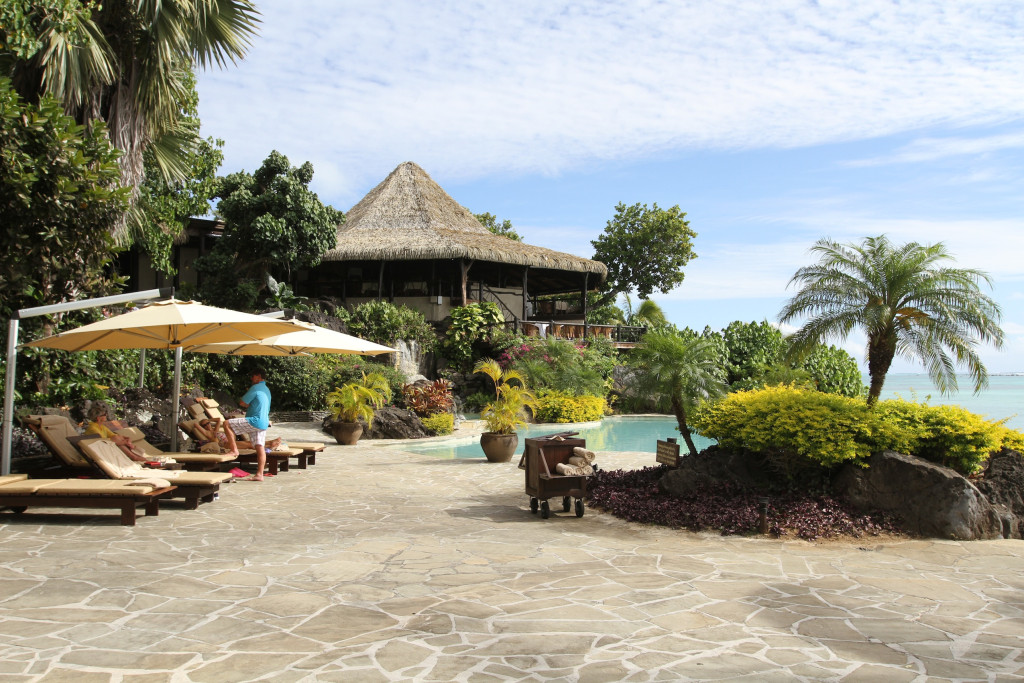 We also paid a trip to the Marine Research centre, where they’re engaged in breeding giant clams which are released back into the lagoon when large enough. Apparently the clams are a local delicacy so they’ve been fighting a loosing battle to keep the stocks up, but there is now a designated marine reserve in a section of the lagoon so hopefully the numbers will start to increase. We marvelled at the breeding tanks with the stunning blue and aquamarine-lipped baby clams. 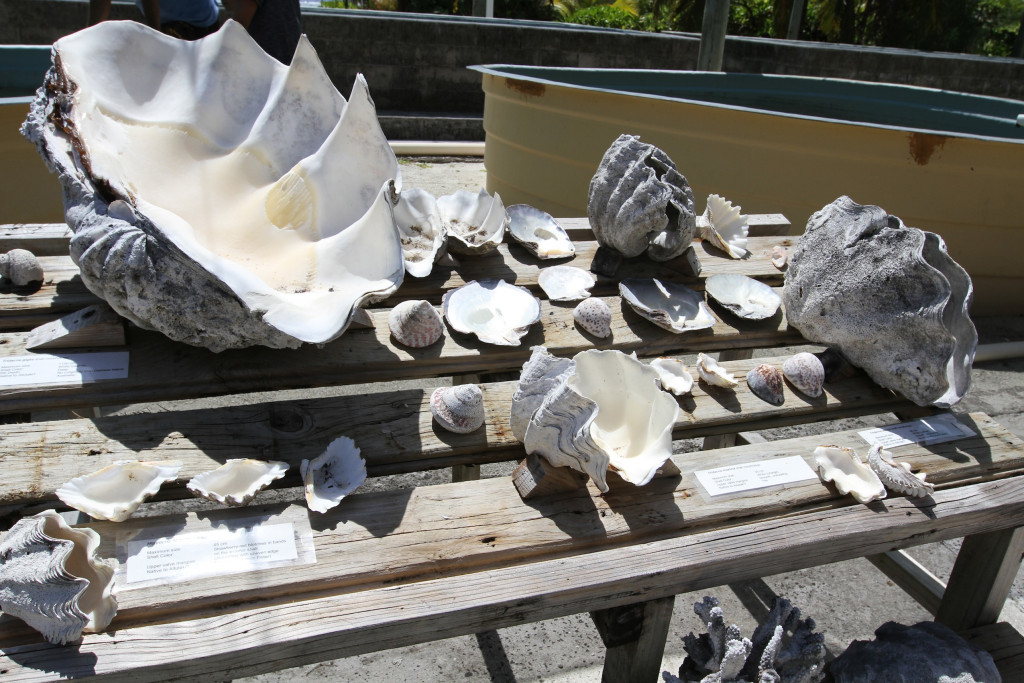 Clams of every size on show 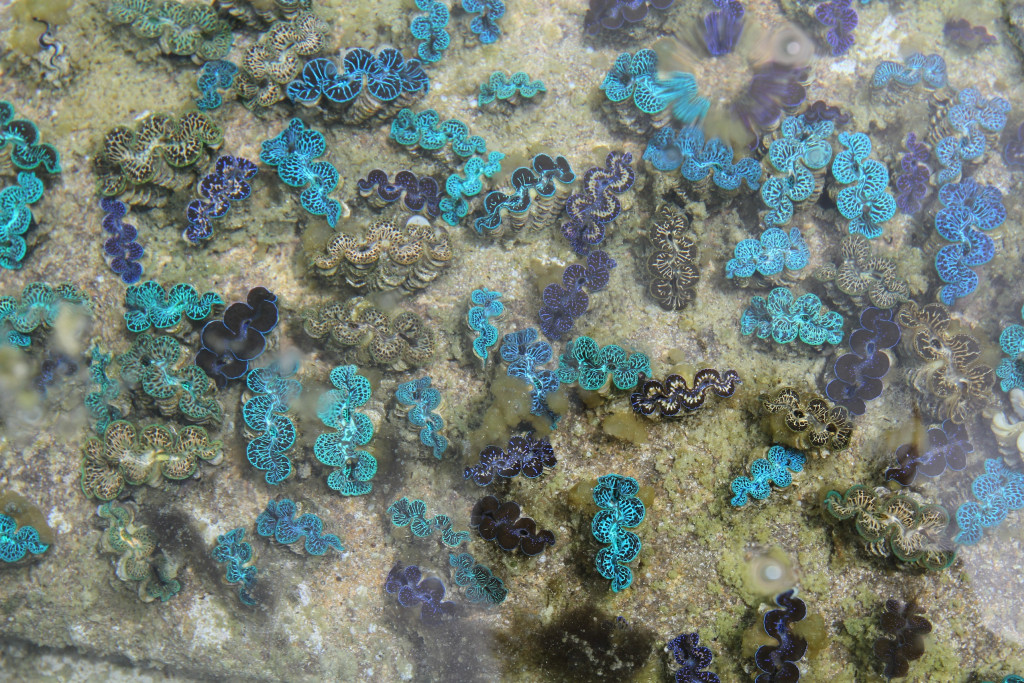 Baby clams (about 3 yrs old) in the breeding tanks. 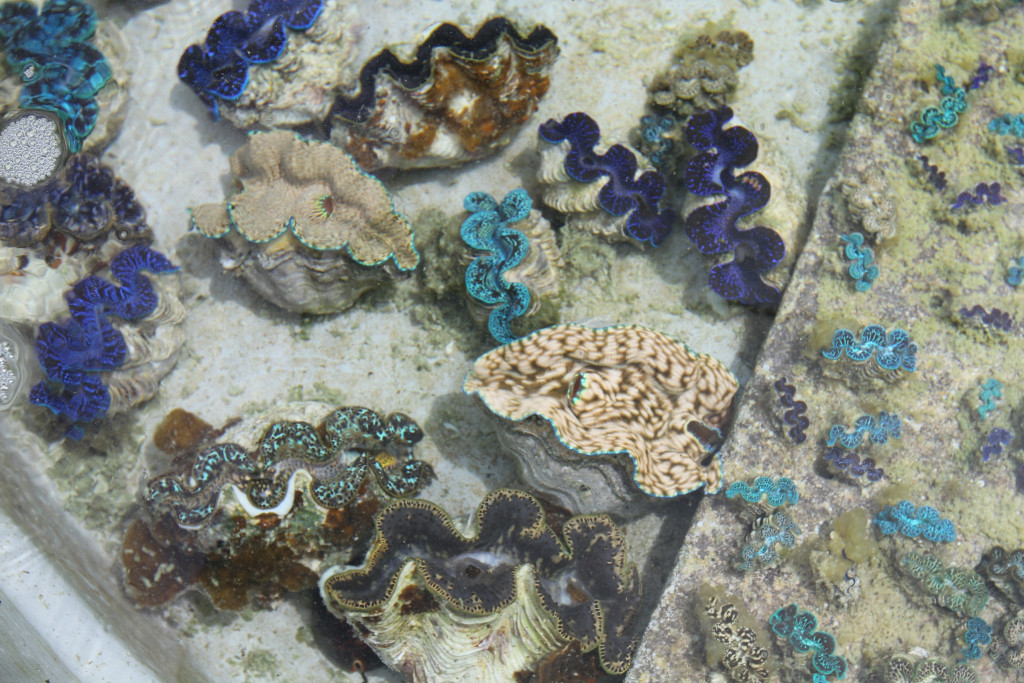 The only other touristy thing to do here is take a lagoon tour with one of the local operators. But having already enjoyed some magnificent snorkelling in crystal clear waters elsewhere, we decided to give this a miss. But the lagoon does look spectacular… 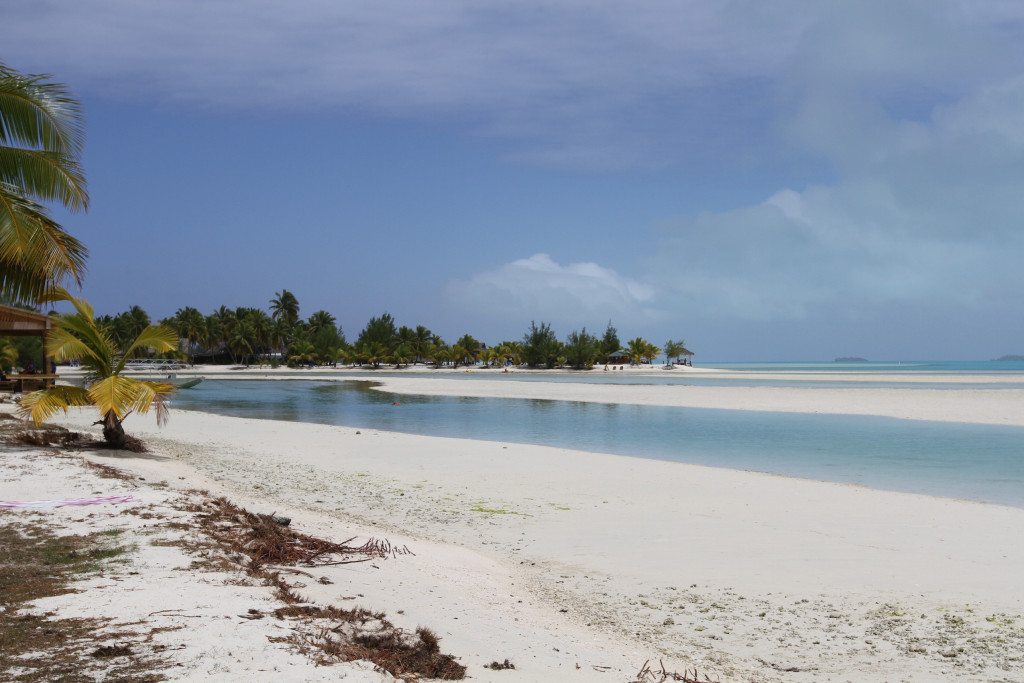 The south-east part of the lagoon

We’re now waiting for the right weather to get us to Niue or Tonga but it’s getting trickier to find a good window. Niue is 500 NM away, and Tonga 800 NM. Either it’s light and fluky winds or full-on south-easterlies with big swells. We don’t like motoring, but we’re also not keen on getting bashed about again. Decisions, decisions….it looks like we may head out tomorrow afternoon on the high tide and take a bit of both – light and fluky to start with, but hopefully building from the southeast by the weekend, and with any luck we should be able to find a sheltered anchorage before the big winds come in next week. In the meantime, we continue to enjoy the fabulous sunsets and sunrises of Aitutaki. 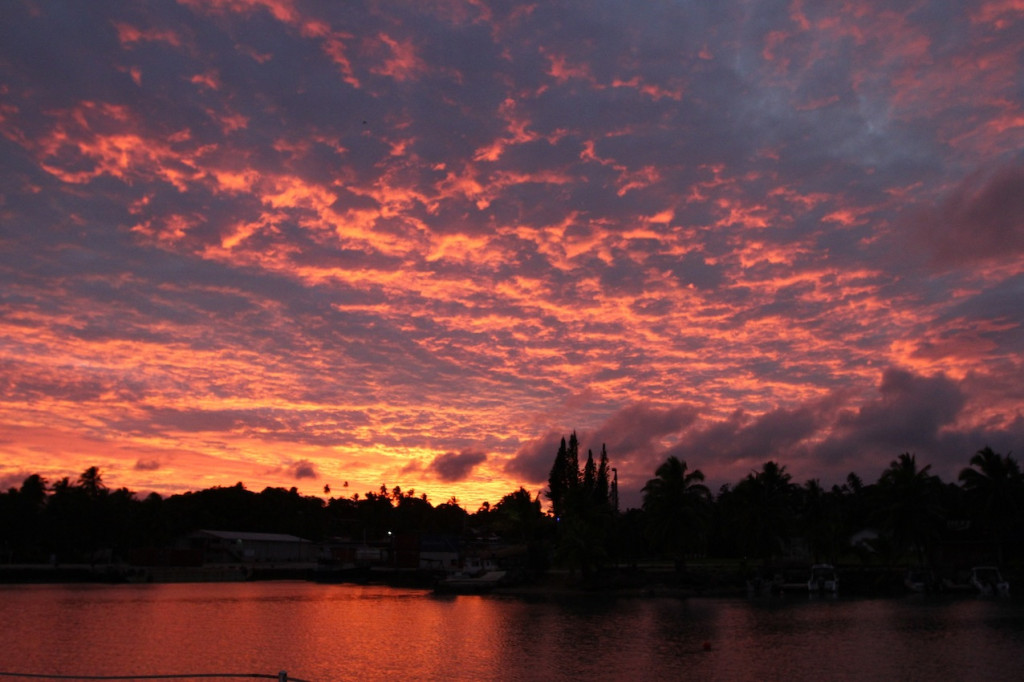 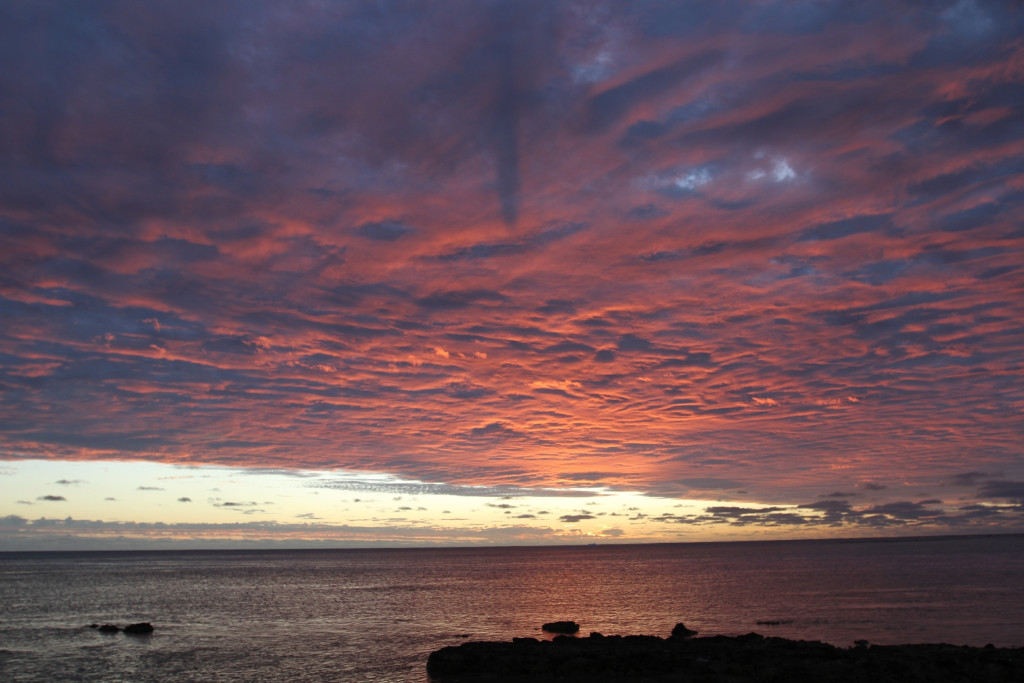