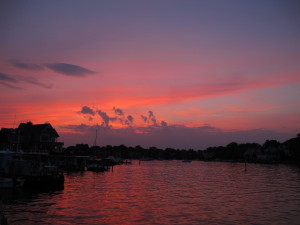 By now you’re all probably sick and tired of hearing about the progress (or lack of) with the boat jobs, so I thought I’d try and stick my head out of the boat and paint a picture of what life’s like in our little neighbourhood of Spa Creek.

Well, first of all it’s a very quaint and pretty place, and we get treated to some beautiful sunsets and sunrises, but peaceful? No. The day starts about 5am with the crows. LOTS of crows. I believe the collective noun is a murder, and they will be as soon as Bruce gets his hands on a slingshot or BB gun. They’ve obviously identified the top of our mast as their ablution block – every morning there are large gobs of red berry bird shit all over the deck. No matter how fast we get the hose onto it, it’s already stained the deck. And this week they’ve managed to get Bruce fair and square on the back (twice!) while he’s been fitting hatches. Their days are numbered. But I digress…

If you were able to sleep through the crow alarm, the next alarm is the church bell across the creek, that starts at 6am and rings every quarter hour. Charming at first, but becoming less appealing (haha) the longer we’re here. Today is Friday, and every Friday morning at 6am the Naval Academy must hold some kind of mass training exercise with loudspeakers – complete with chants and cheersquads. Suffice to say, sleeping in is not an option! 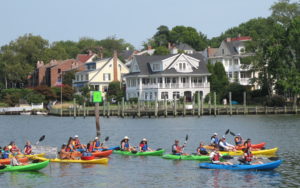 As the day progresses, the tourist boats and the “Historical Kayak Tours” begin their procession past Toucan. I can confirm that we are definitely on the oldest marina in Annapolis, having heard that particular phrase several hundred times now!

Then there’s the Stand-Up Paddleboard (SUP) school at the end of the dock, which presents quite a nice distraction for both of us with the buffed male instructors and their bikini-clad students.

Right in front of Toucan are the two barges complete with crane and pile driver for the reconstruction of the private jetty opposite us. They’ve been here now almost as long as us and we’re having bets that they’ll still be here when we leave. In fact next door they’ve demolished a house, and almost built a new one in the same time! So we also have the merry sound of machinery and nail guns as background noise. 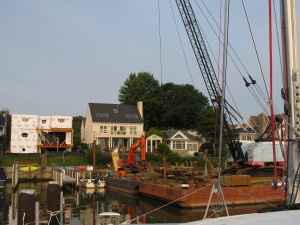 You think that’s it? Oh no – we haven’t even started to talk about the sirens yet! The emergency services must be overworked here, as there’s a regular wail of sirens throughout the day and night. We’ve decided that Americans must be hearing-impaired as the sirens clearly aren’t sufficient. No Sir-ee, they lean on the horns too – big, loud horns blasting their way over Spa Creek bridge!

And then, the ‘piece de resistance’. All the hubbub of the day dies down, we repair to the cockpit for some R & R and a cold one (or two) and then just when we’re nicely relaxed – “BOOOOM”!! The Annapolis Yacht Club has a tradition of firing a cannon (yes, a cannon) to mark official twilight every evening. It never fails to elicit an expletive and scare the crap out of us. You can see why we’re pretty keen on getting off the dock soon and finding a nice quiet inlet to drop the hook!

6 Responses to The ‘Hood