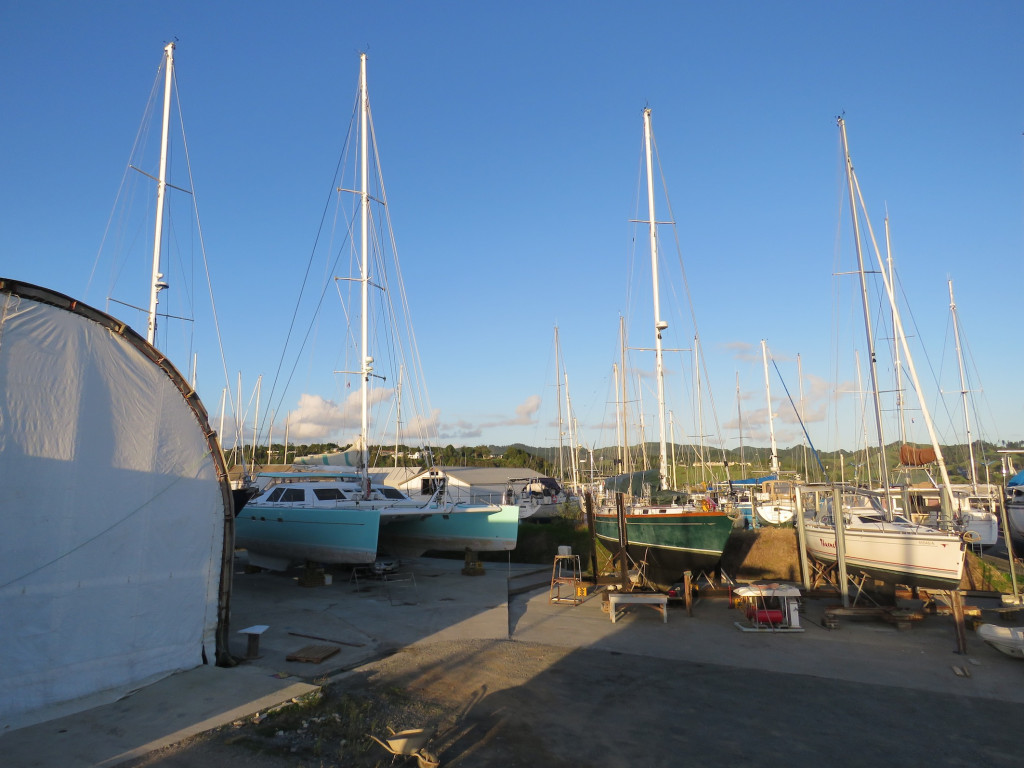 Forgive us. It’s been a long time between blogs and for those of you not on Facebook it might seem as if we’ve dropped off the edge of the world. In fact it’s quite the opposite – for the last eight weeks we’ve been high and dry, living and working on the hardstand while we grind through the seemingly endless list of boat jobs.

This is a different sort of ‘down-time’ – not the sort where you put your feet up and have a cup of tea. This is more your ‘head-down’, nose-to-the-grindstone time. It’s the ‘down side’ of cruising life, the time we get to pay penance for all those glorious days of sailing into sunsets and cavorting on deserted beaches. It’s ‘TLC for Toucan’ time, and we certainly don’t begrudge her that.

But life on the hard is a strange, noisy, dirty world. Firstly, there’s the ladder to negotiate every time you want to get on or off the boat, often juggling armfuls of tools or materials. Then there’s the hose you attach to your galley sink outlet that drains into a large jerry jug below – which, of course has to be emptied regularly by lugging it to the waste water drain. Using the ‘head’ is definitely a no-no, and it’s a long walk to the ablution block. Only the truly hardy would want to get dressed and do that walk in the middle of a cold night, so the rest of us with middle-aged bladders have to resort to the bucket. And then endure the ‘walk of shame’ across the boatyard, usually as all the workers are arriving the next morning. Not very glam dahlings!

In addition to the day-long ‘beep, beep, beeping’ of the tractor as it hauls boats in and out (will I ever get that noise out of my head?), there’s the constant noise of the air compressor from the painting shed, just metres from our back steps. 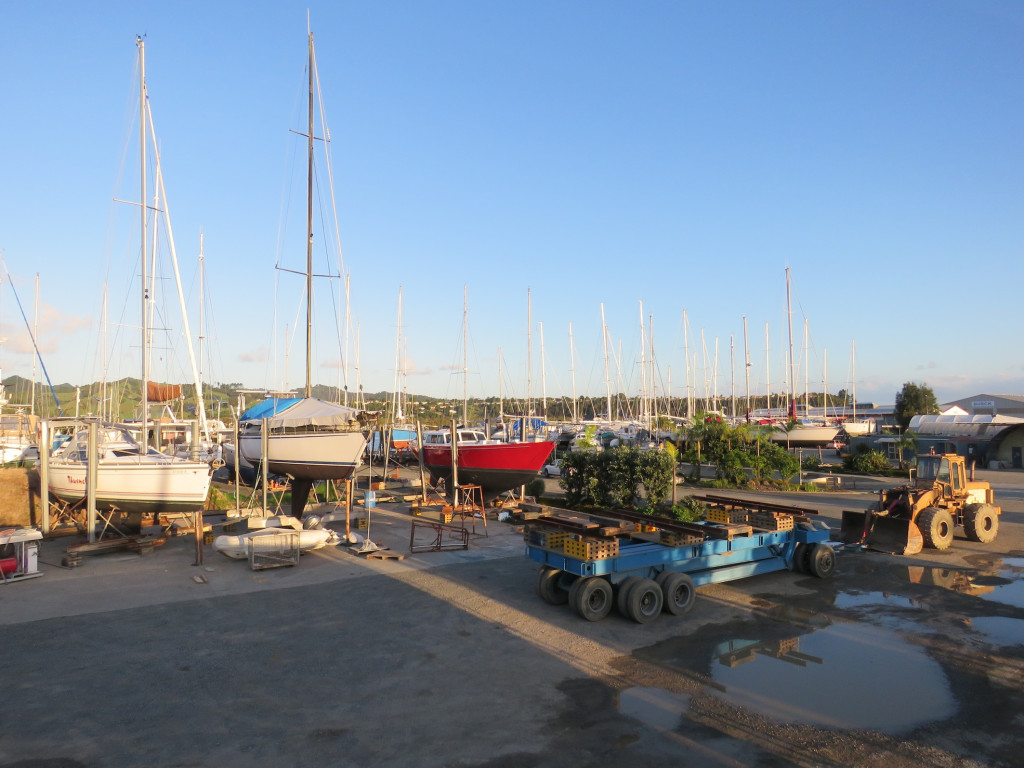 That beeping loader and trailer 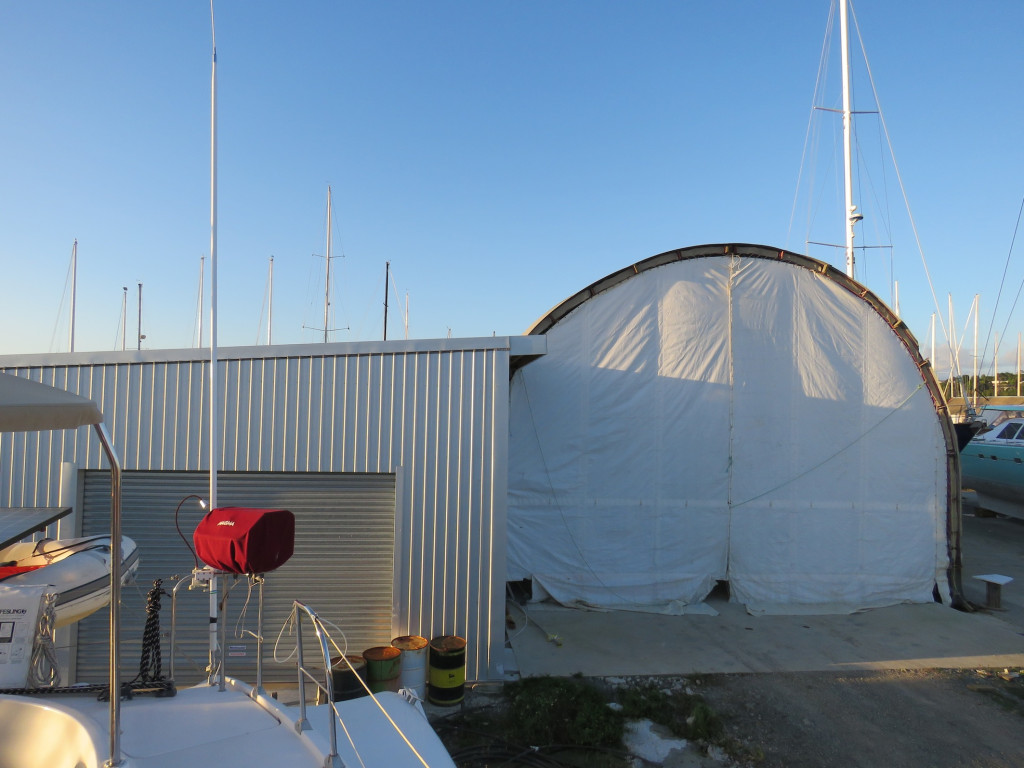 Our back porch view of the painting shed

Thankfully there’s a shower block and laundry, and the boatyard do a good job of making sure they’re complying with council regulations re pollution and waste – drop-sheets and vacuum cleaners are required for any scraping or sanding work. But unfortunately much of the yard is gravel, and being reclaimed land it quickly becomes a swamp with even a small amount of rain. It was a daily battle to keep the gravel and dirt off the decks, one that we constantly lost.

Not a fun place in the rain

On the plus side, Toucan has received a very major overhaul. We knew we’d have to put new antifoul on the bottom, but what we didn’t realize was that she had never had an epoxy barrier coat put on to protect the gelcoat from water ingress. As the old anti-foul had pretty much fallen off, we decided to take it all off, back to the gelcoat, put three coats of epoxy on and then two coats of antifoul. That’s a lot of scraping and sanding and filling! We started out thinking we might be able to do most of the prep-work, but after a full weekend of scraping we’d only managed to do half of one hull, so we decided that if we ever wanted to get out the yard alive we’d need to call in the experts. 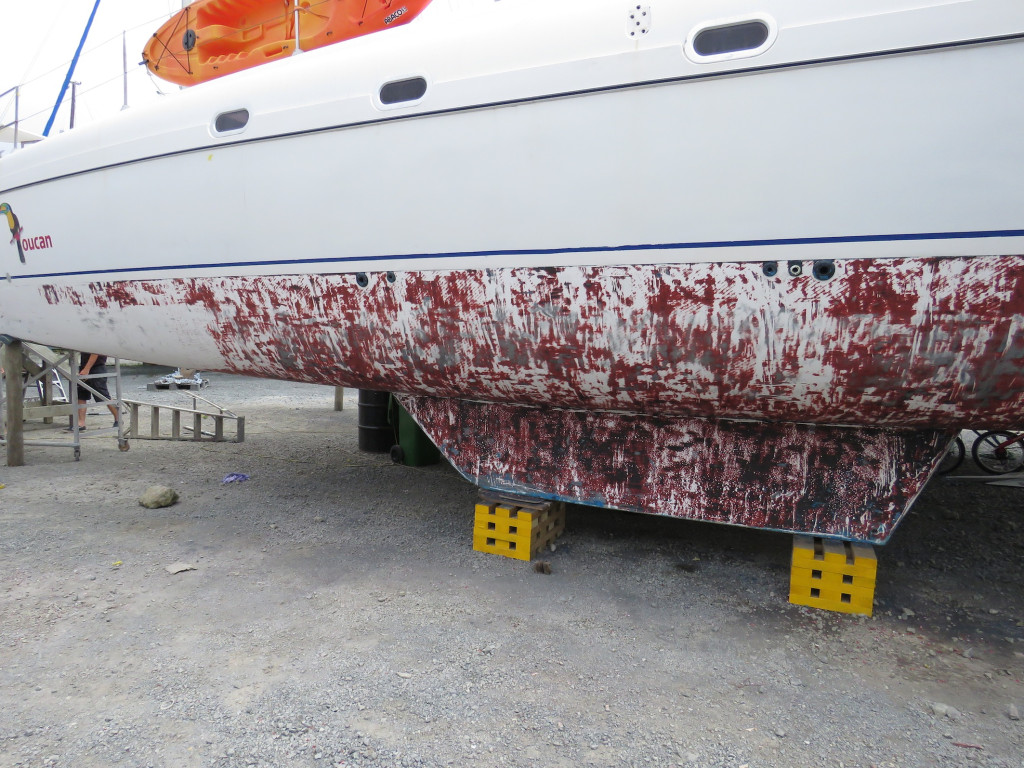 the scraping is done, now for the sanding

The first mate hard at work with the sander

The guys did a great job and we now have a beautiful spray-painted, smooooth bottom. Hopefully the days of getting in the water to scrub the bottom every time we anchor somewhere are a thing of the past. 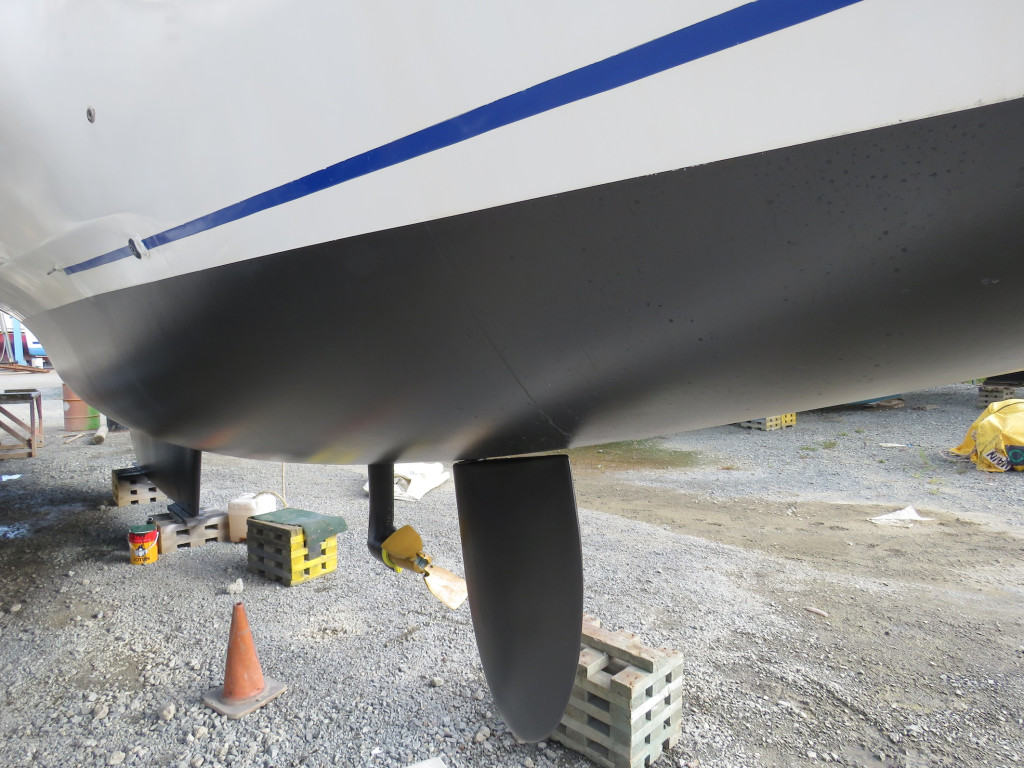 Smooth as a baby’s bottom…

With the help of Glen, our lovely Yorkshire marine mechanic, we managed to identify why the starboard motor had been intermittently losing power at anything over 1800 rpm. Seems there was crud (technical term) in the fuel tank that had bunged up (another technical term) the banjo valves in the fuel line. Simple, easy fix. Feeling optimistic, we set Glen to work on the port side engine, where our sail-drive had been gobbling oil like the cookie monster. We were hoping that this too would be a relatively simple case of finding the oil leak and fixing it. Glen removed the sail-drive and spirited it away to his workshop. Two days later he returned, shaking his head and looking very grim. (You have to imagine the next bit in a broad Yorkshire accent). “Well”, he said “ It’s not good news I’m afraid. It looks like it was put t’gether by a blind man on a gallopin’ ‘orse”. Apparently when he opened it up, not only did he find a plastic bag inside, but all the bearings fell apart. How on earth it got us as far as it did, we’ll never know. Glen did his best to attempt repairs, but the more he took apart the more bits disintegrated. It seemed inevitable that we’d be up for a new sail-drive – except the ST40 sail-drives are no longer made. If we upgraded to a newer model we’d also have to replace the starboard one, as they have to be compatible. Dollar signs were flashing before our eyes, and the skipper was in danger of having a heart attack. But dear Glen (and Geoff, his boss at Whangarei Marine Services) came to the rescue – they discovered an ST40 in the back of their workshop that had been swapped out under warranty with only 10 hours on it. They checked and tested it – apparently the owner had complained that it had a bit of whine and didn’t like it. Well, for the price they were prepared to sell it for, we reckoned we could cope with a bit of whining, even a full-on tantrum. It would probably fit right in on Toucan….

New wind and tridata gauges integrated with the autopilot

A new air-cooled compressor for the fridge, together with a ginormous cooling plate, and wire dividers and baskets to make the Fridge Nazi happy.

New gaskets on all the portholes, and two hatches re-sealed that were leaking.

Repairs to the wind generator

Tricolour light on the top of the mast, & spare halyards, new topping lift.

And then there were the myriad of smaller, fiddly jobs including rewiring and replumbing, all of which required Bruce to assume his favourite position of contortionist/cave-diver. 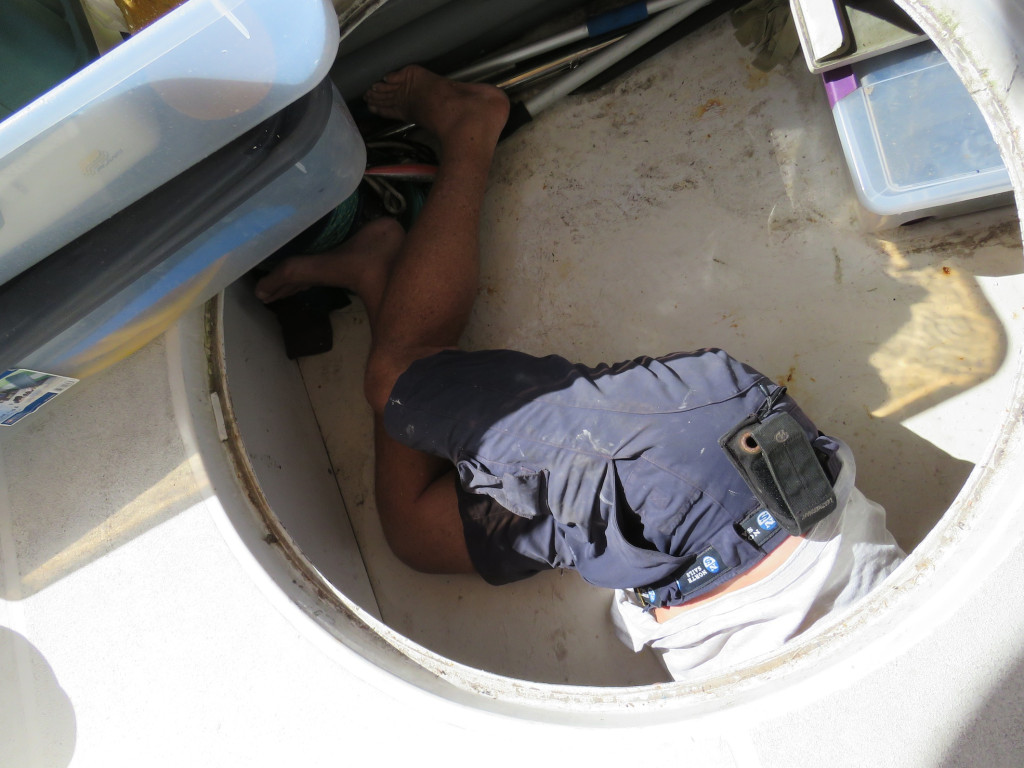 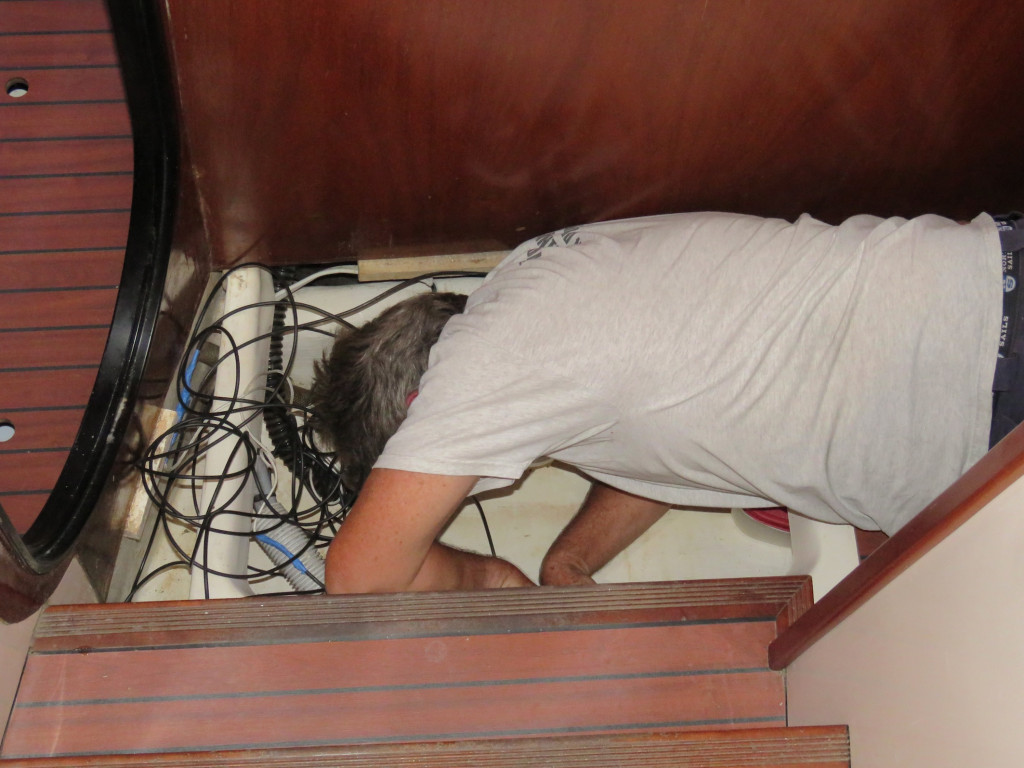 While Bruce was busy with most of these, I was slaving over the sewing machine, making a comfy helm seat cushion, new dinghy covers (quaintly known as dinghy ‘chaps’ – Yee haa!) and a set of cockpit shade awnings. 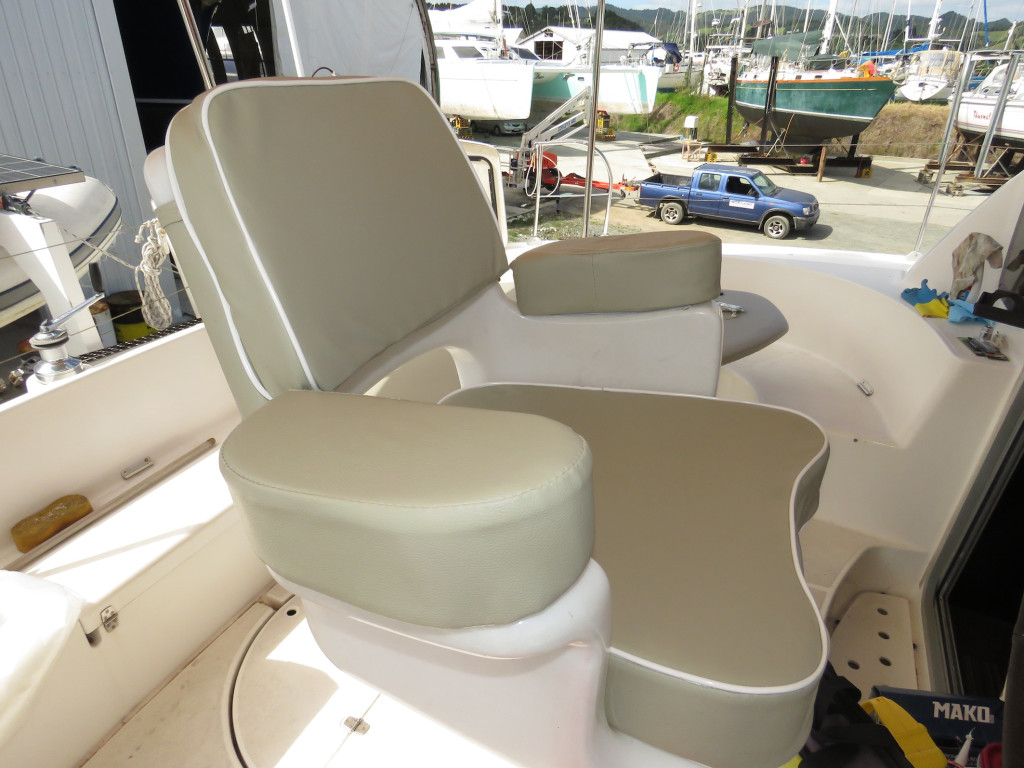 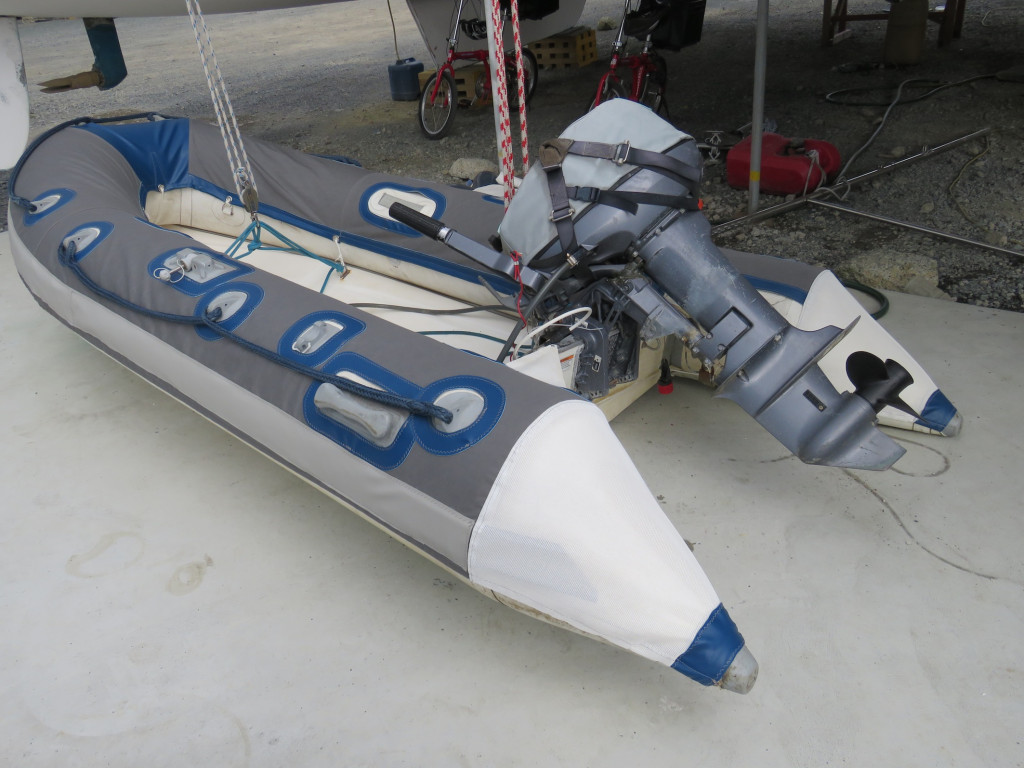 The new dinghy chaps, what a fiddly job.

And finally, endless days of polishing and cleaning, trying to get all the grime and overspray from the yard off the decks and topsides.

In amongst all that, we had occasional moments of welcome respite. Our good friends Jack & Marce from “Escape Velocity” were also hauled out for a couple of weeks while we were there, and it was great to have their company. A special treat was to cycle across the bridge to “Stumpy’s” – the best fish and chips in town, where we could enjoy a picnic on the grass away from the boatyard. 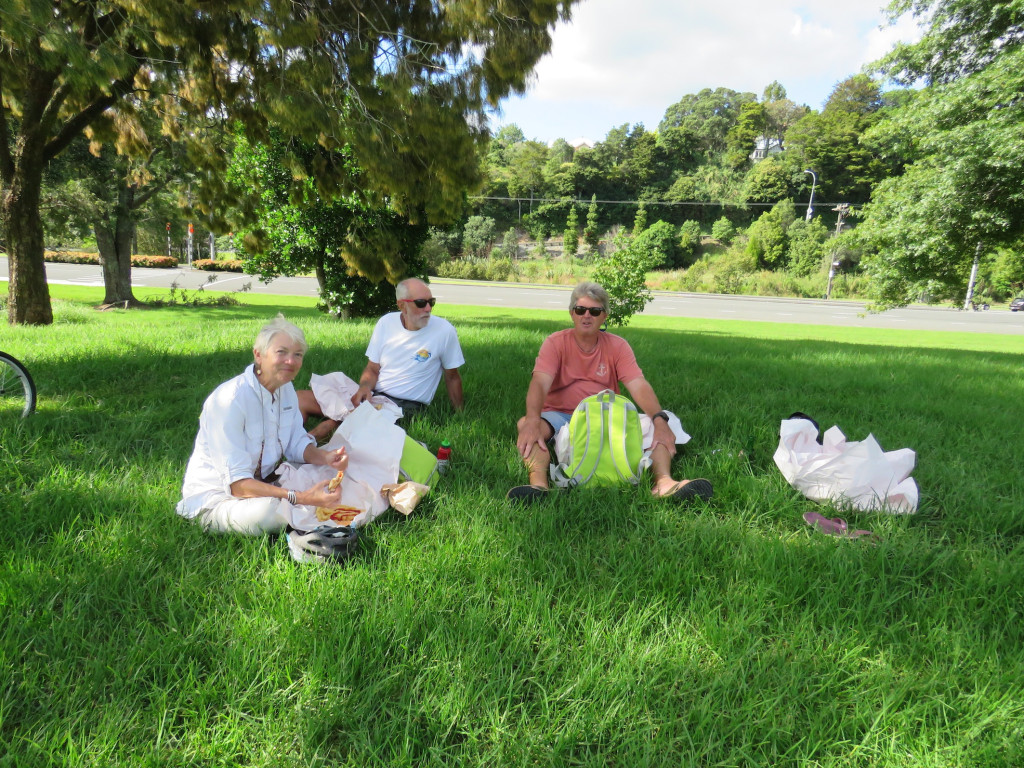 And talking of cycling, we were particularly grateful to our other cruising buddies on ‘Rehua’ for loaning us their folding bikes, without which we would have been even more high and dry. The boatyard is a couple of kilometers from the nearest shops, so we got used to our daily cycle in to pick up groceries or parts, and it was good exercise to boot!

We were also lucky enough to have a visit from my sister, Chris, from the UK, enroute to see the rest of the family in Australia. We took a couple of days off the boat jobs and did some sightseeing, including driving down to Whangarei Heads, and up to the Bay of Islands. It was an all-too-fleeting visit, but just wonderful to see her again. 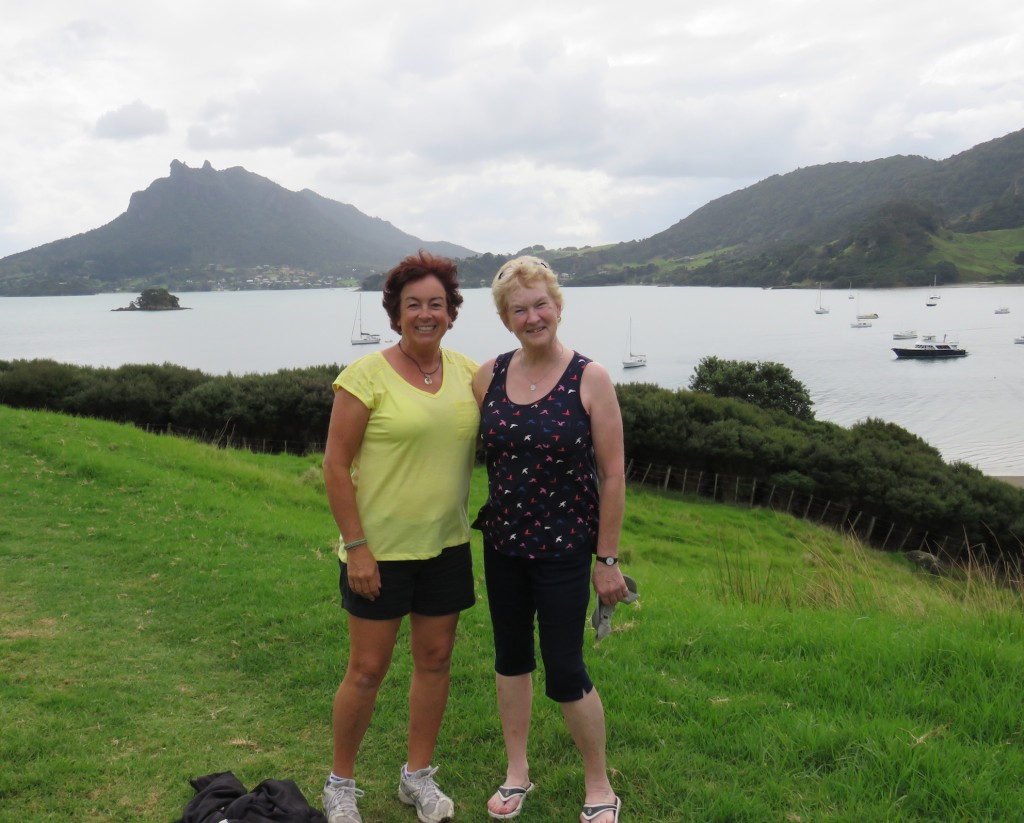 Chris’s visit was a great excuse to down tools! 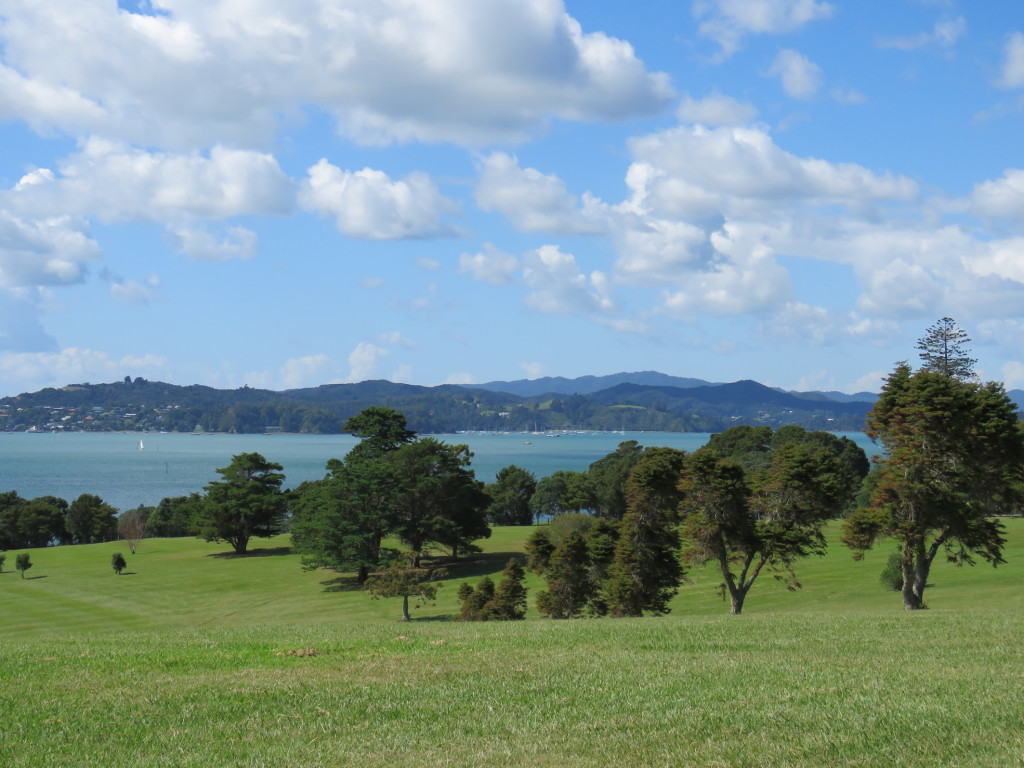 The Bay of Islands

All in all, it’s been a few months of some of the hardest yakka we’ve done, almost on a par with the first fit-out in Annapolis, and the bank balance is looking decidedly wobbly. But the up-side is Toucan is looking better than ever and ready for more adventures of the cruising kind. So let’s get out there and have some fun!!