Curacao is very different from Bonaire. It’s much more industrialized and commercialized, and they even have traffic jams and traffic lights! The island is mainly famous for its’ liqueur and for the Queen Emma floating pedestrian bridge that spans the two sides of Willemstad, the capital. Originally built in 1888 and subsequently upgraded, at 548 ft it’s the longest bridge of its kind in the world. Considering that Willemstad is a busy industrial port, it’s particularly bizarre that all vessels have to enter via this bridge, which swings open on demand, powered by two diesel engines! We got to experience this first-hand when we went to Curacao Marine in the harbour, but more on that later..

We arrived in Curacao on Monday after a fast downwind sleigh ride from Bonaire, with winds gusting up to 28kts. We decided not to put the jib out and just sailed with two reefs in the main, which seemed pretty comfortable. As we weren’t booked in for our haul-out at Curacao Marine until Wednesday we headed to one of the popular anchorages just further south, Spanish Waters. It was an interesting entrance and not one to attempt at night as it has reef on one side and a shallow sand bar on the other. 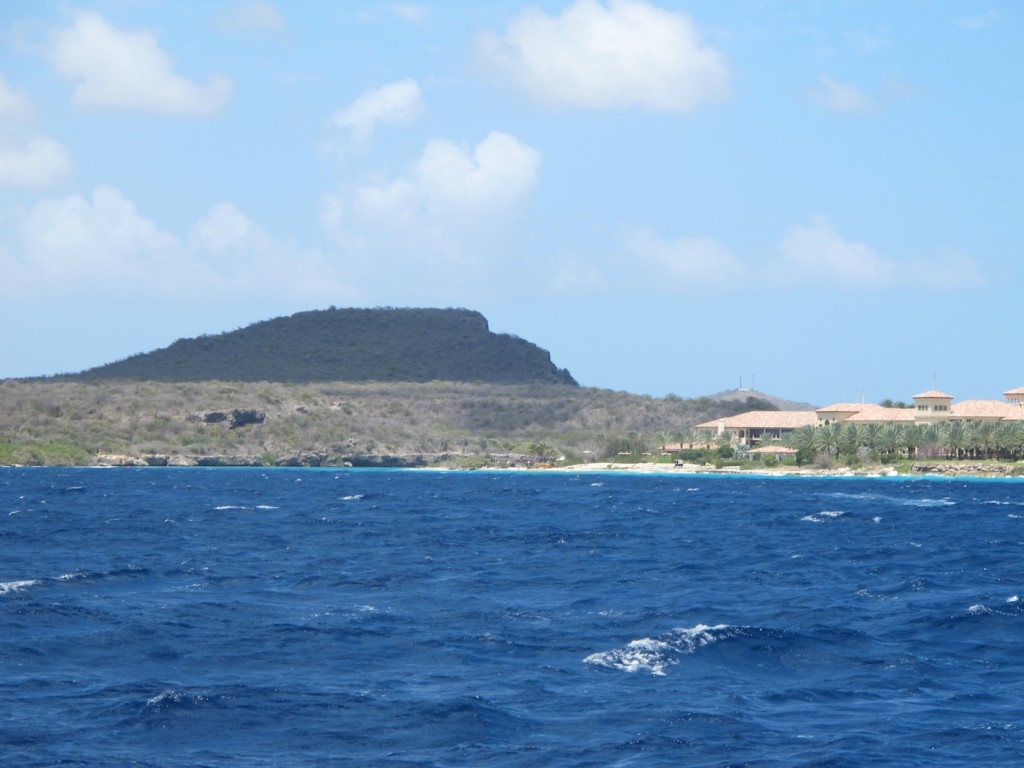 Once in, you sail right past a large resort on the right, so close we could wave to the people lounging in the swimming pool. What a contrast from the rough water outside! 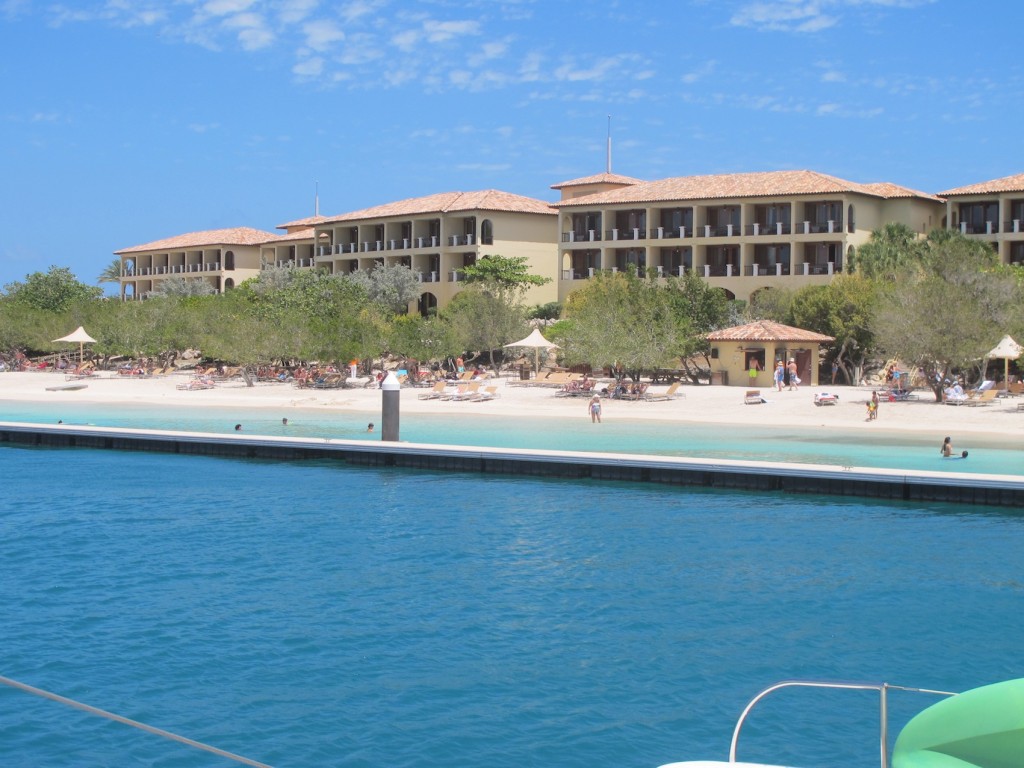 The resort at the entrance to Spanish Waters

The anchorage opens up into a large body of water but it’s crowded with boats all packed into the ‘designated’ anchoring areas. We’d read that it was a place that many boats never leave. Maybe it’s because they don’t want to go any further west, because the anchorage itself wasn’t very appealing. On one side we had what looked like a giant transformer, and on the other was a lot of very nouveau riche houses that reminded us of Sylvania Waters in Sydney. 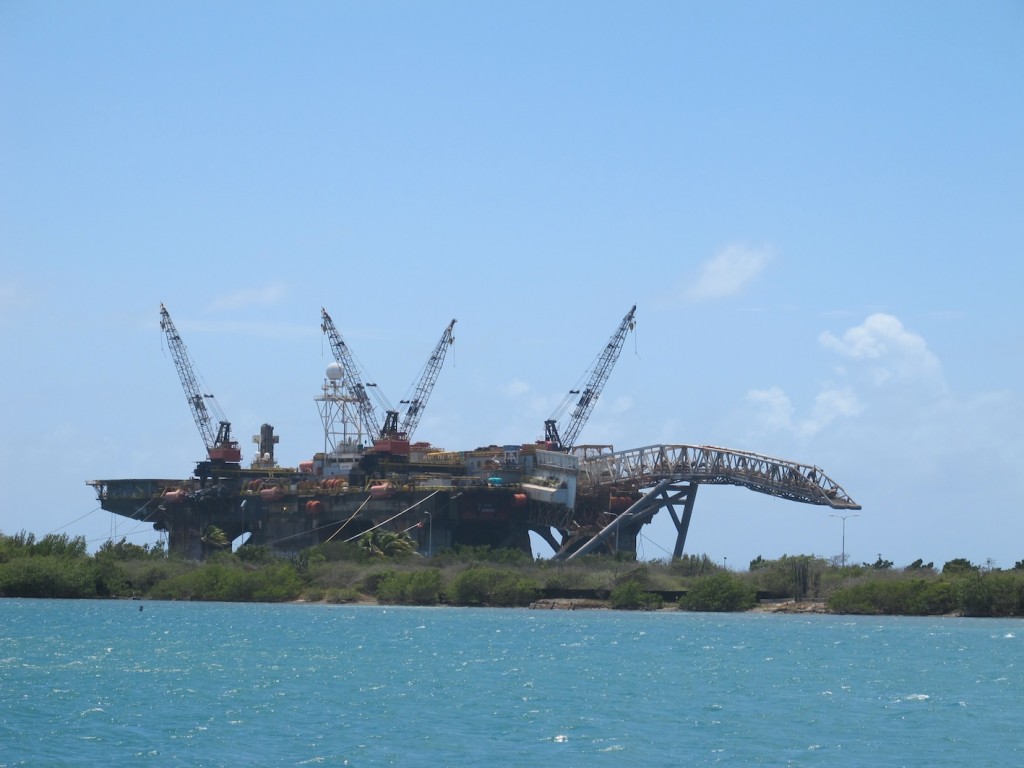 The ‘transformer’ – any minute now it’s going to rear up and get us! 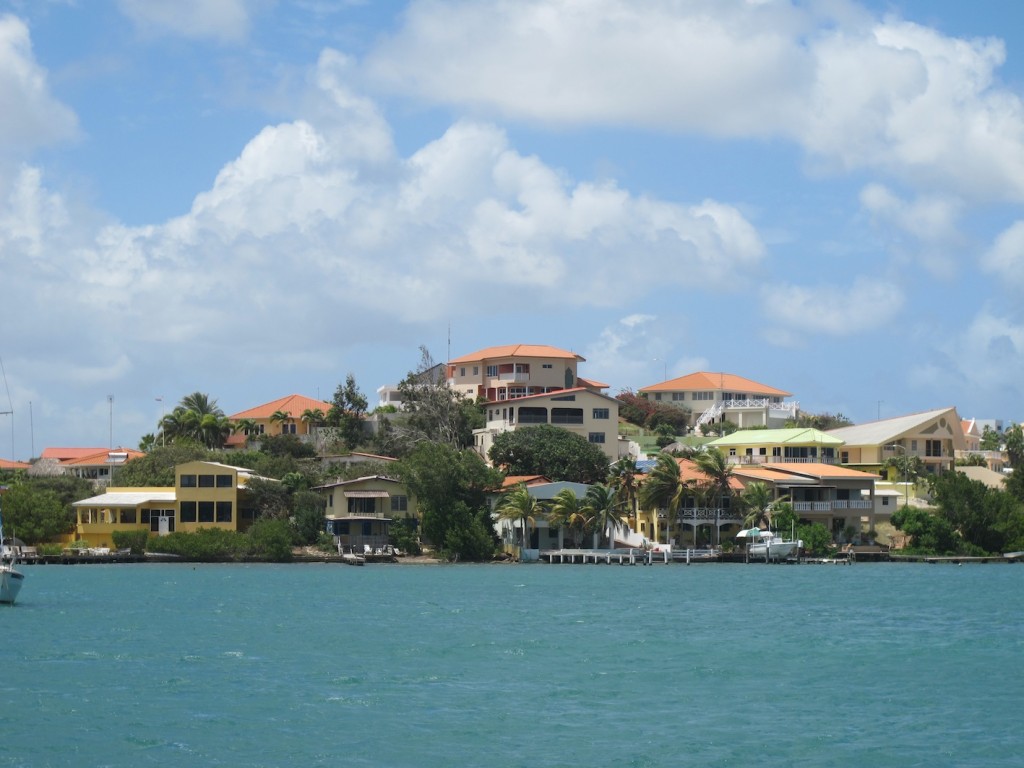 Oh, and it was windy. Mega mega windy. We had a couple of goes of getting the anchor down until we were happy we wouldn’t swing into any one else, and then settled in for our first blowy night in Curacao, hoping our trusty Rocna anchor would hold us in the gusts.

the crowded anchorage in Spanish Waters

Thankfully it did, and the next morning we tackled the process of clearing in – it seems to be getting more challenging the farther west we go. Yachts have to check in at Willemstad, but there is nowhere to anchor in the harbour – instead most people get the bus from Spanish Waters. So off Team Toucan went, armed with passports and paperwork to find the Customs office, the Immigration office and the Port Authority office, in that order. 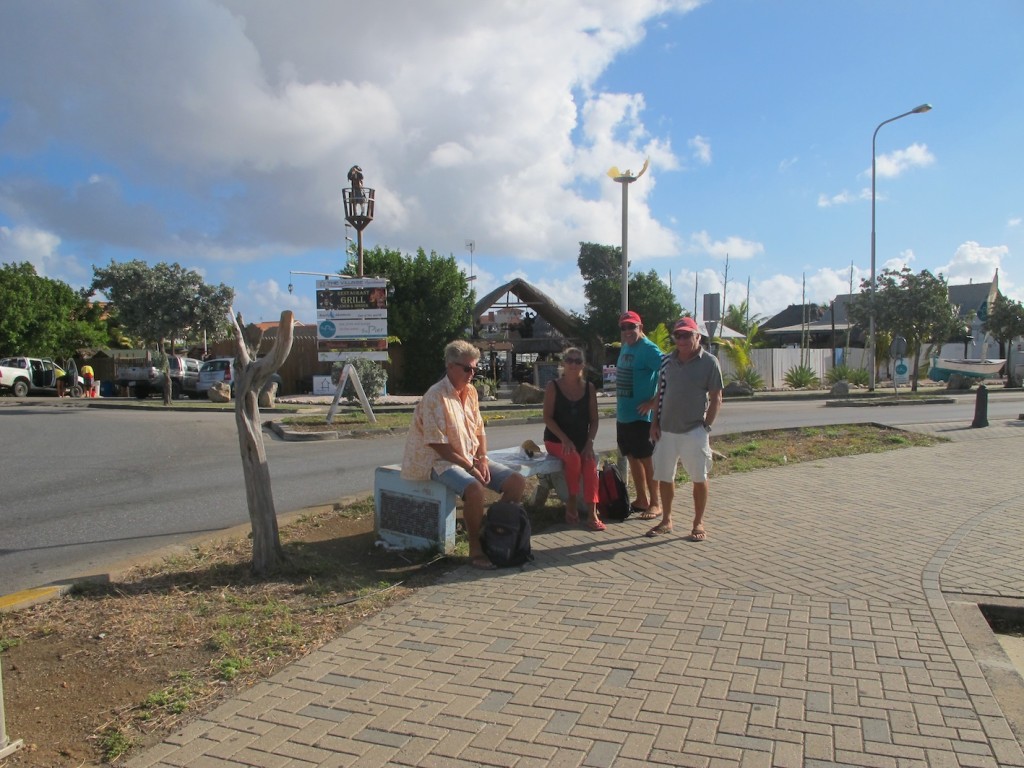 Waiting for the bus into Willemstad

Customs was relatively easy, right near Queen Emma Bridge, and the officials were very friendly and welcoming. To get to Immigration, you have to walk across the bridge, turn right and make your way to the commercial dock area under the huge span bridge. Luckily our customs officer had given us the rather cryptic description “find the security hut and that will be your key to finding everything else”. She was right, and the security guard pointed us in the right direction otherwise I think we would still be wandering the docklands of Curacao!

Immigration is somewhere down this way…

It was quite a long walk… 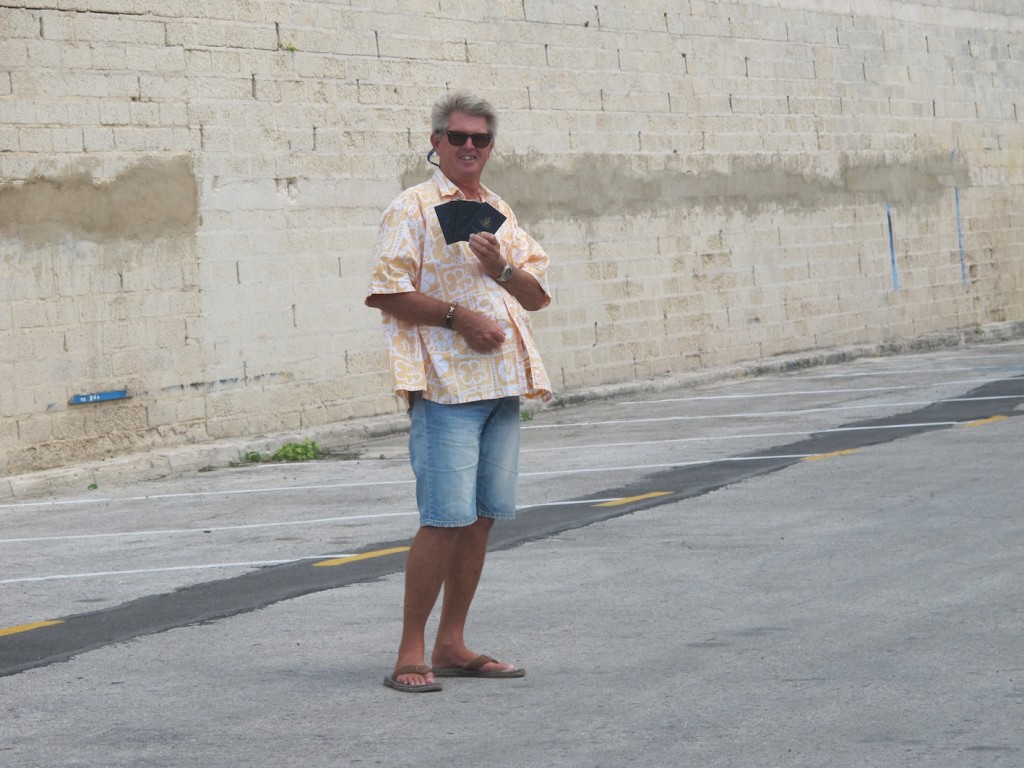 Have passports, will travel, if only we can find Immigration 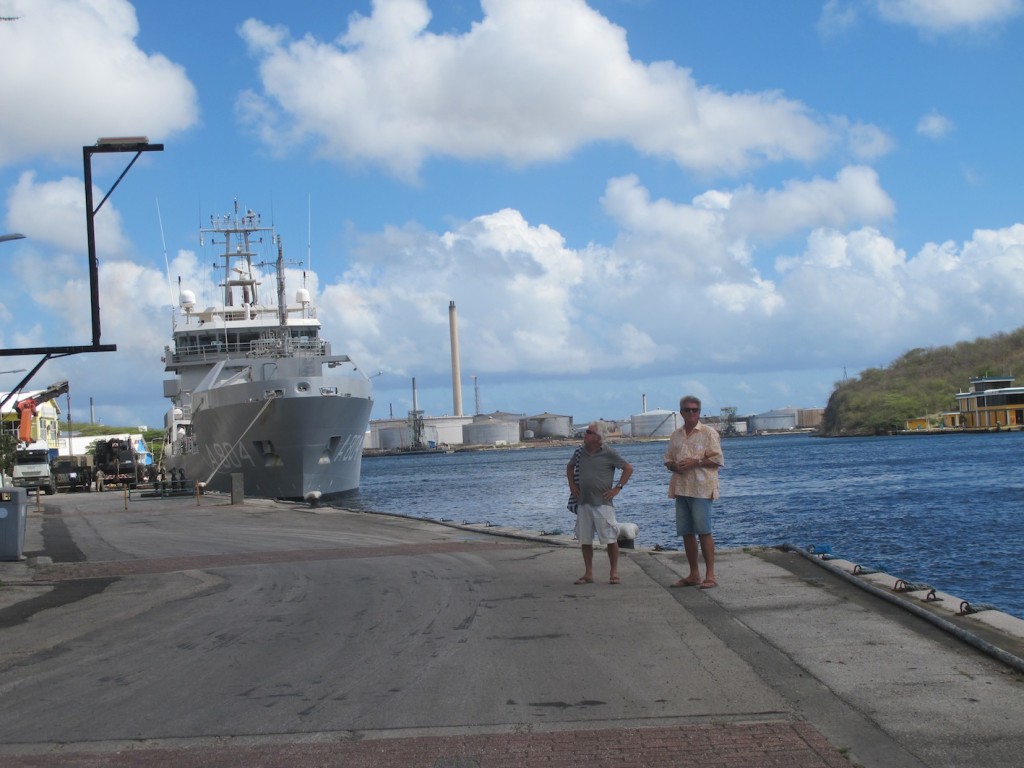 Are we there yet?

but finally there was the green Immigration office, and the Port Authority next door where we had to obtain an anchoring permit. Everyone we dealt with was very pleasant, but talk about a laborious process!!

Coffee was desperately needed after that, but with two cruise ships in town it seemed we were out of luck – no-one was serving coffee because it took too long to make! Oh well, better have a beer then! 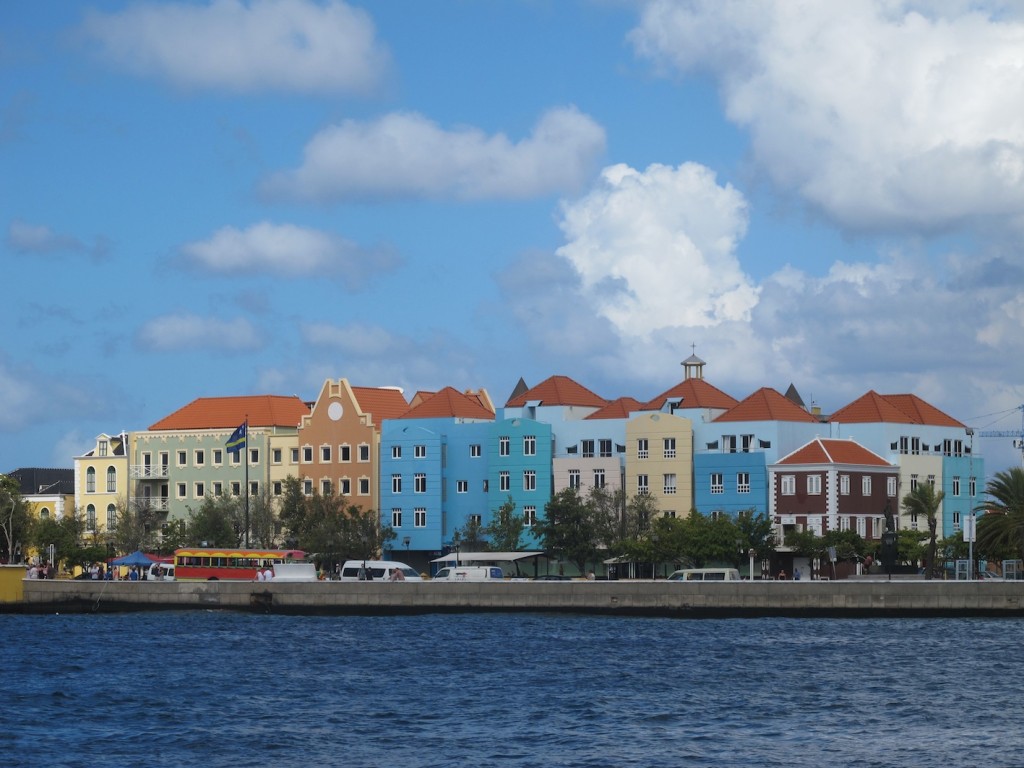 The pretty pastel buildings on the waterfront

After refreshing ourselves, Bruce and I did a tour of the slave museum, Kura Hulanda, which is one of the most comprehensive collections of African history, artifacts and memorabilia in the Caribbean. 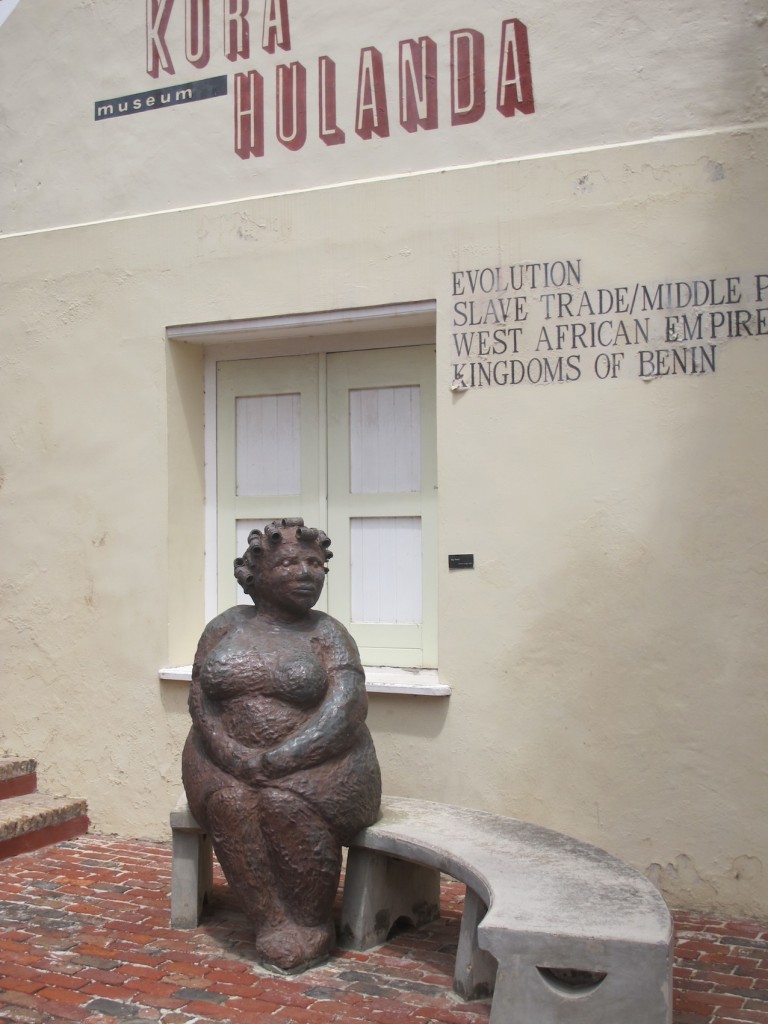 The museum is the vision of Jacob Gelt Dekker who privately funded it to the tune of $6 million. It chronicles the origin of man in Africa and a history of the African people in addition to the focus on the Caribbean slave trade. Despite the harrowing subject matter, it’s a deeply moving and beautifully presented exhibition set in the grounds of the original slave yards and merchant homes in Willemstad, with wonderful sculptures and landscaping around the grounds. 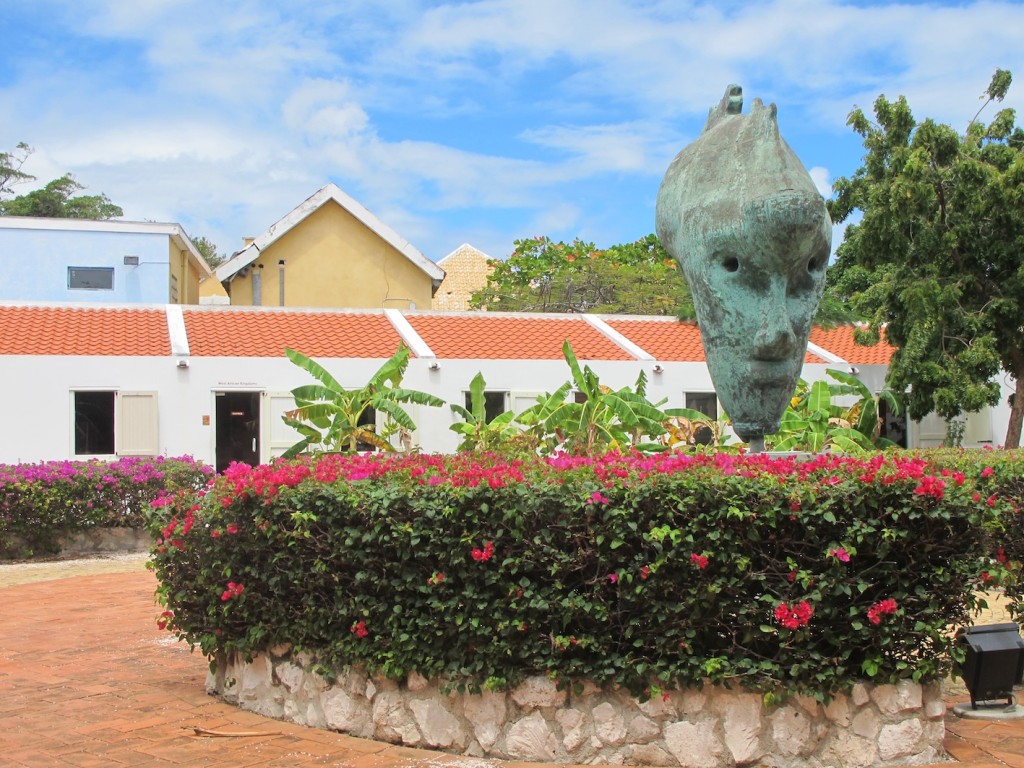 The original slave yards and huts 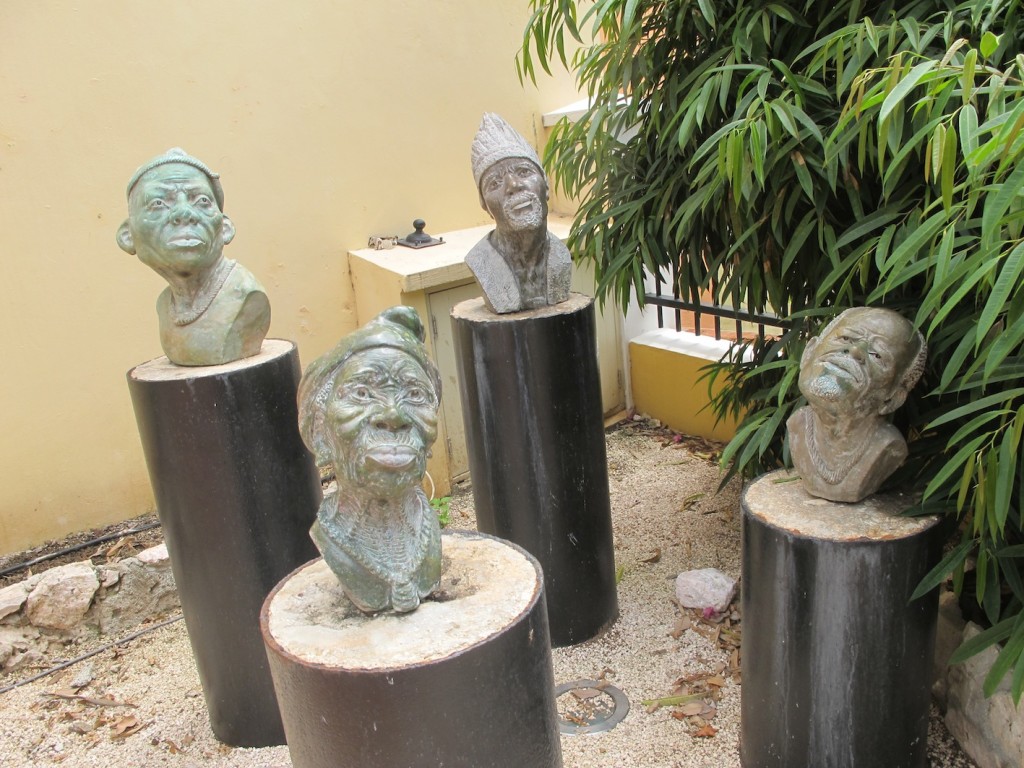 The whipping posts in the yards 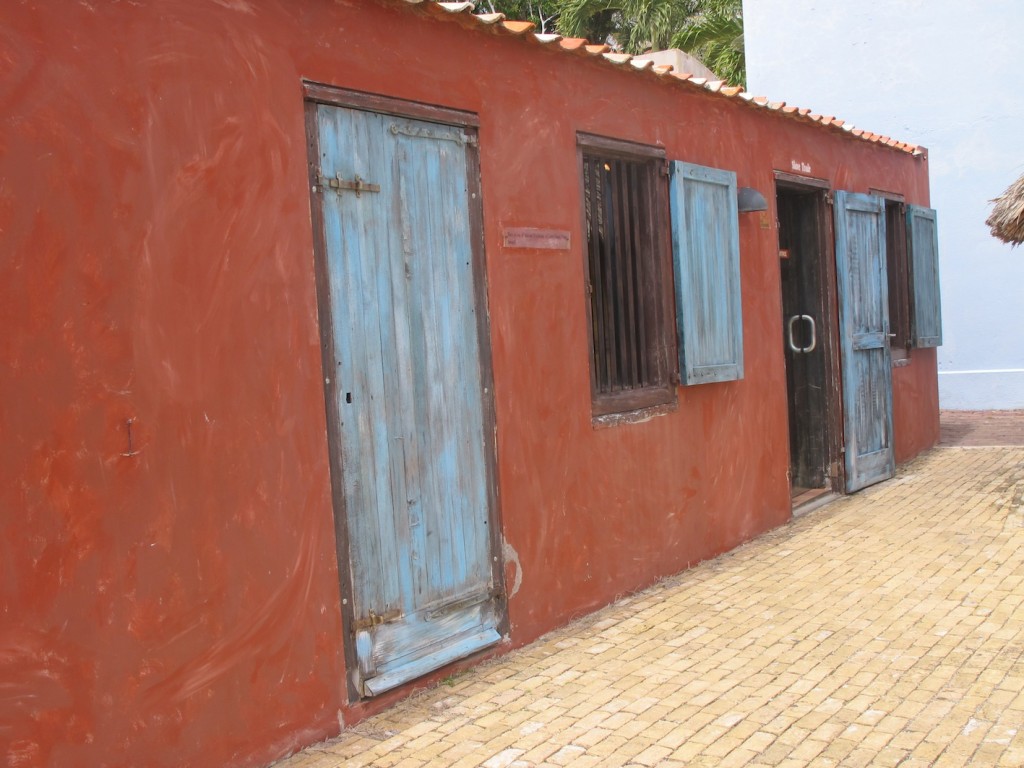 The original slave huts, now part of the museum

It could have been an extremely depressing depiction of man’s inhumanity to man, but the lasting impression for me was the strength of spirit of the original slaves and their will for survival against all odds. 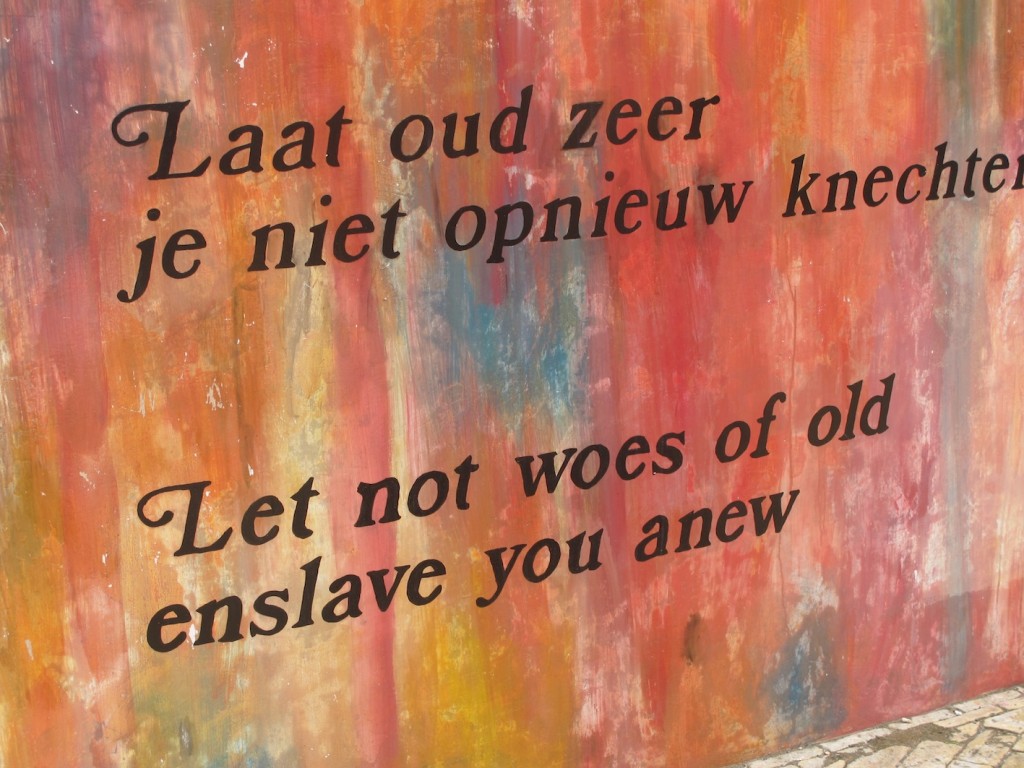 After a full day of exploring Willemstad we returned to Spanish Waters where we found a beer or two and (finally!) the infamous Captain Jack Sparrow propping up the bar at The Pirates Nest. 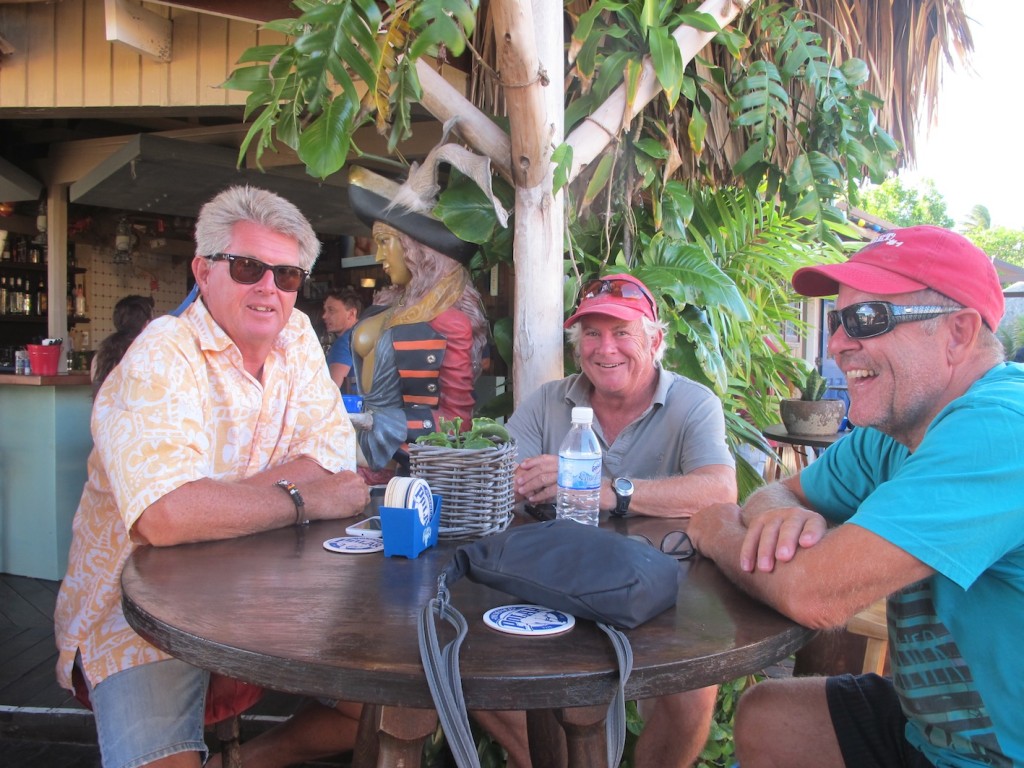 The lads waiting for a beer at Pirate’s Nest 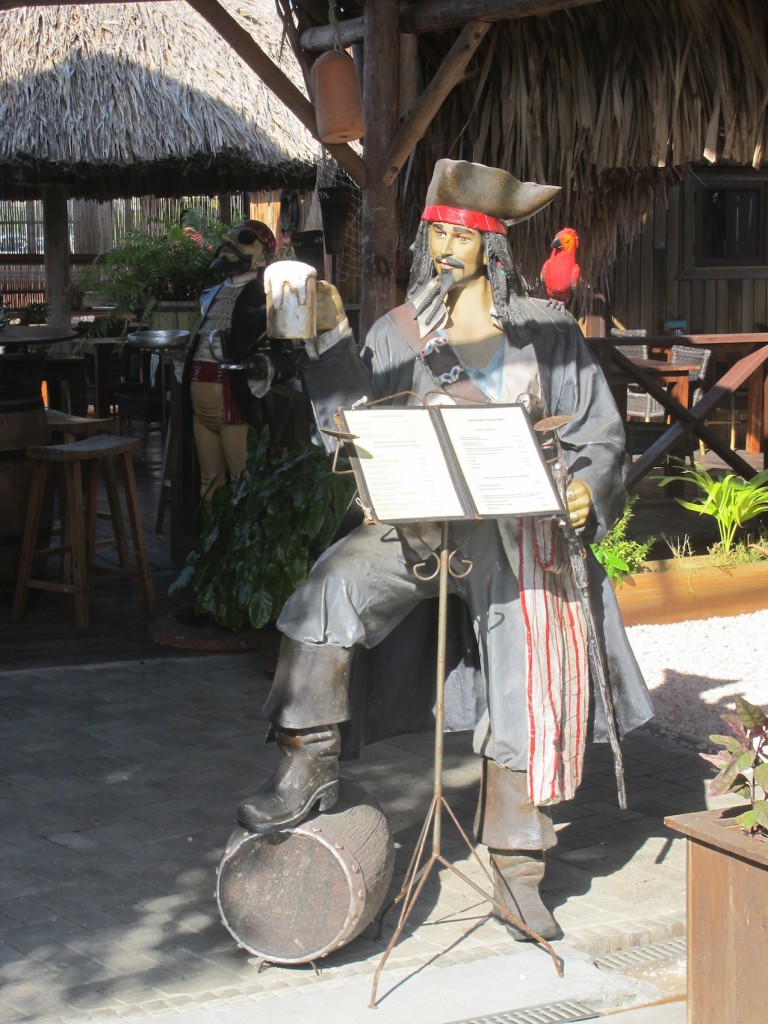 On Tuesday we decided we’d had enough of being blown to smithereens in Spanish Waters. The cruiser’s net on the VHF radio suggested that no boats would be coming or going in such strong conditions. They didn’t count on the mad Aussies, who decided to head up the coast and into Willemstad harbour, where we’d booked a slip at Curacao Marine for the night so we could be onsite and ready to be hauled out the next morning. It was definitely windy out there, – with no sails up we were still doing 7-8 kts with large following seas. Thankfully it was only a short hop up the coast. We radioed ahead to request a bridge opening and only waited a few minutes before the huge contraption began to swing open. We were definitely the centre of attention from all the cruise passengers lining the dock! 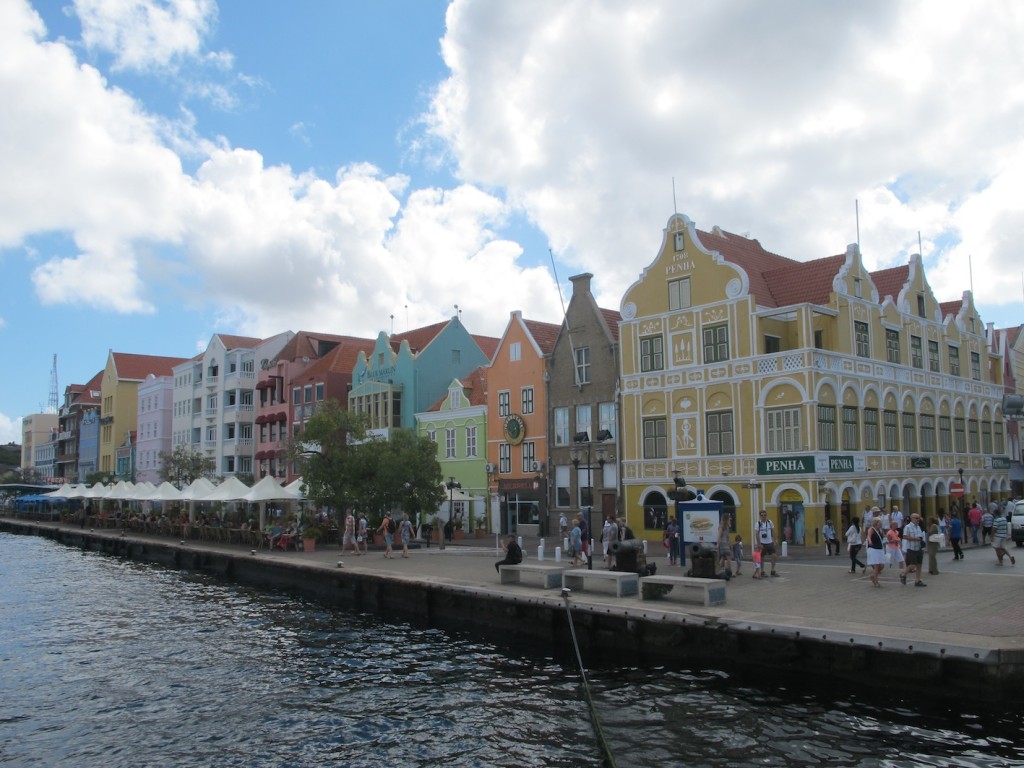 passing by the waterfront, Willemstad 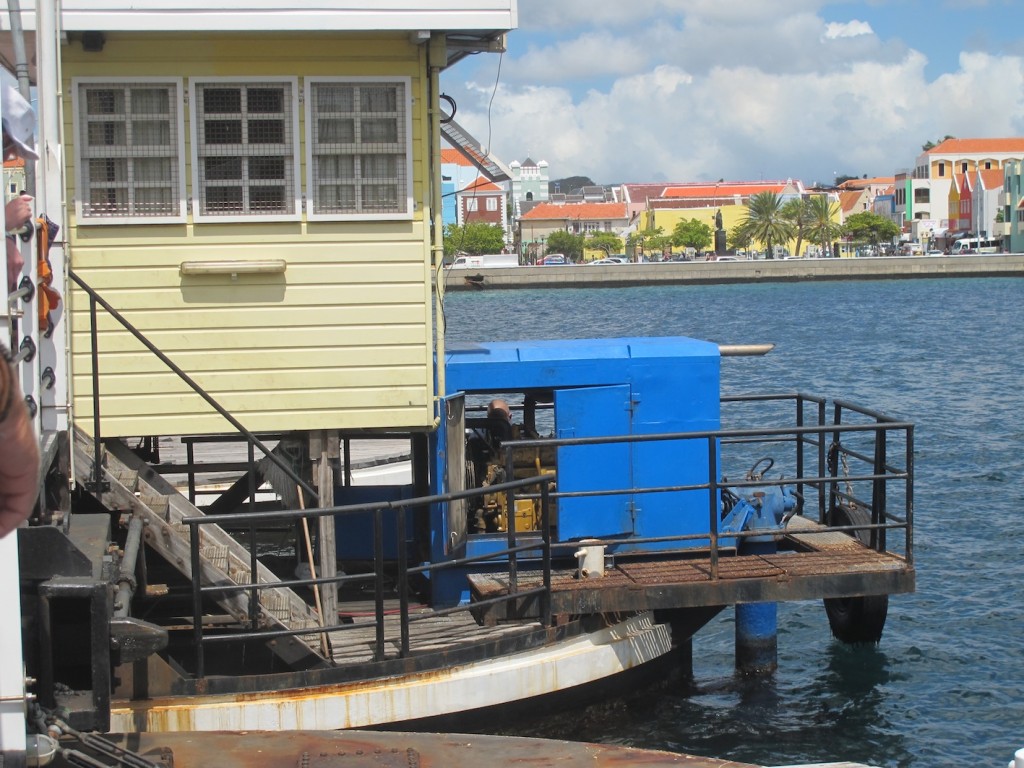 the diesel engine on the swinging bridge 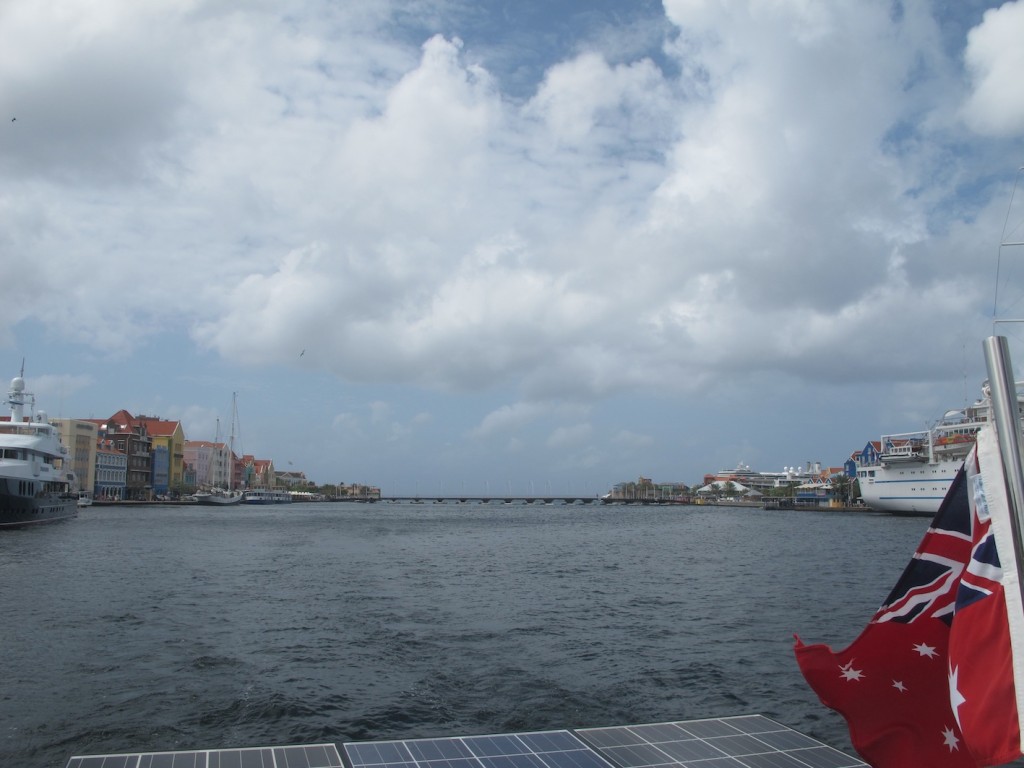 Getting into our slip at Curacao Marine also proved to be a bit challenging with a 30 kt crosswind blowing us off, but with a little help from some of the other cruisers on the dock we eventually managed to get safely tied up, and breathed a sigh of relief. It wasn’t the most pleasant view from the front porch but at least we could step of the boat without having to endure a long, wet, dinghy ride as we did in Spanish Waters.

the view from the front porch, Curacao Marine

We were due to be hauled out the next morning so we could replace the rudder bearings on both hulls. Our time slot slipped back from 8.30 to 9.30 to 12.30, and then finally 1.30 pm they were ready to haul us out. That only left us 3 ½ hours to get both rudders pulled and the bearings replaced. Despite the fact that the lovely lady at the Fountaine-Pajot factory in France had told us it would be a very simple job, we knew better …everything we’ve tried to replace on this boat so far has been seized solid or corroded.

The haul-out process itself was impeccable – they have a state-of-the-art hydraulic trailer that can accommodate any size of boat. They were even careful enough to wrap the pads with gladwrap to prevent them leaving black marks on the hull. 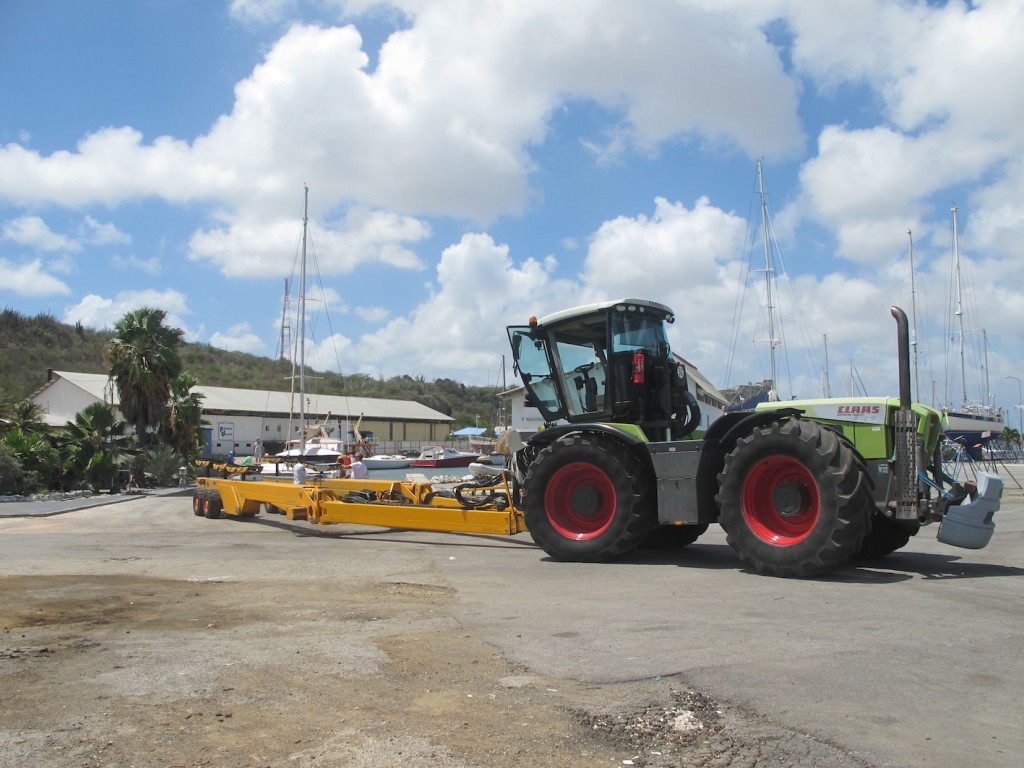 The tractor and hydraulic trailer used to pull us out 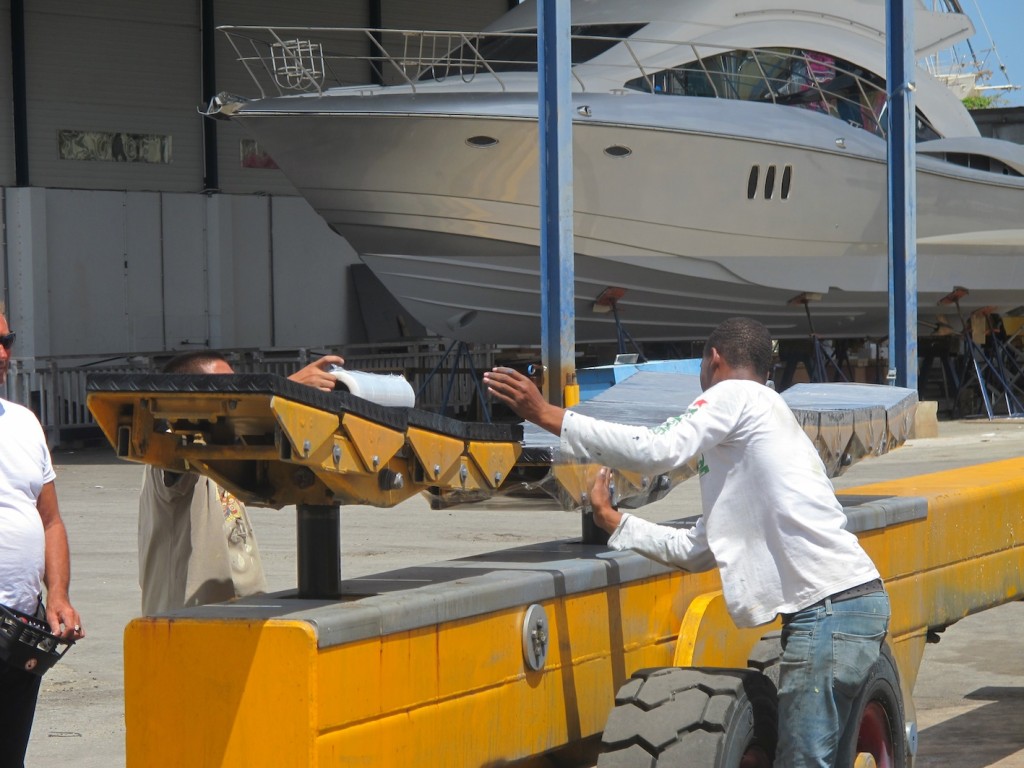 wrapping the pads with gladwrqp

Ever so slowly and carefully they positioned the trailer under the bridgedeck and magically Toucan emerged from the water. 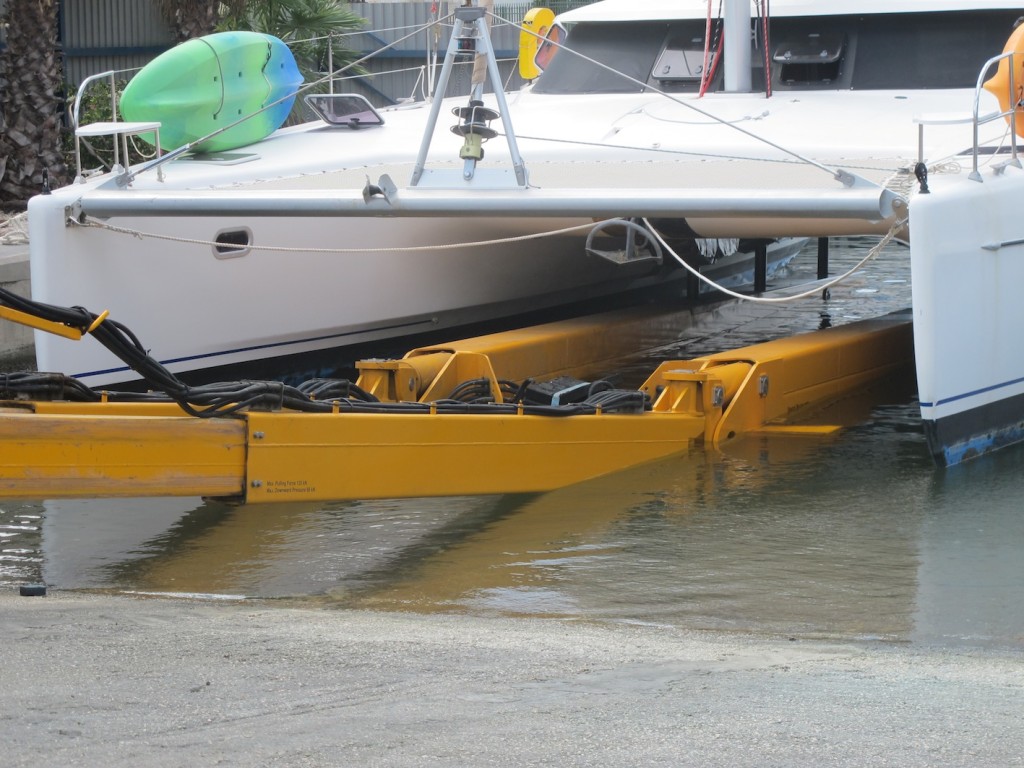 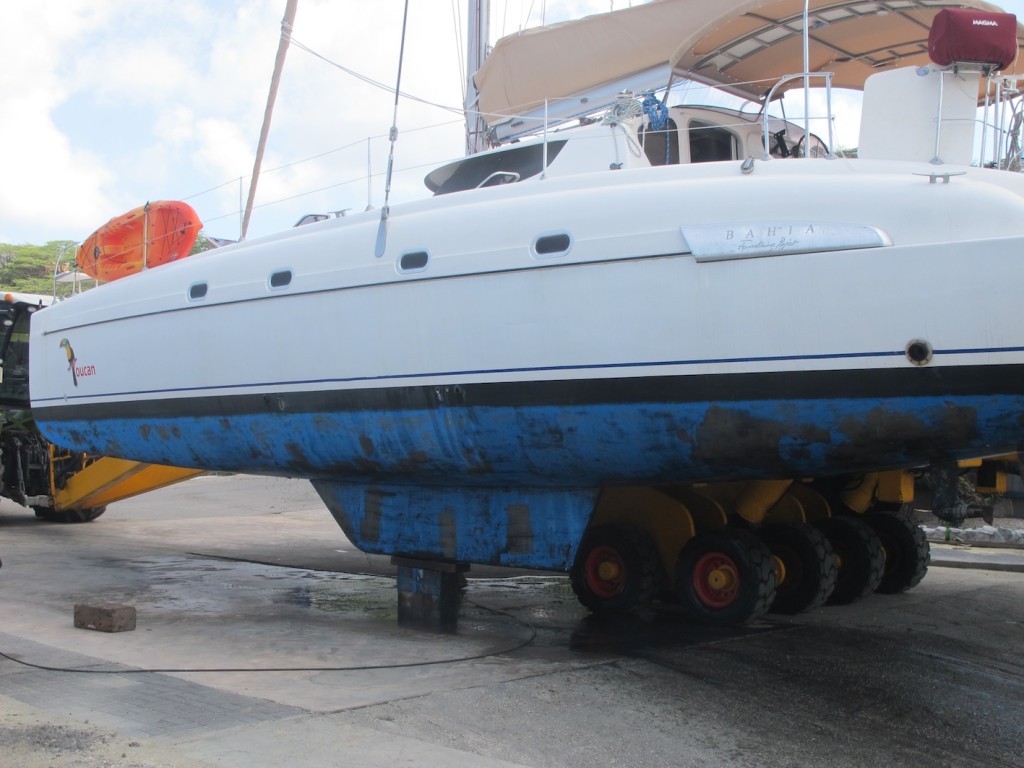 Sadly, the anti-foul paint job we organized to be done in Baltimore has been a massive failure – there’s very little of the (new) black paint to be seen, after only 9 months. We’ve complained to Marinemax who did the work, but now that we’ve paid the money it appears we have little comeback, except to mention what a terrible job they did in the hope that others don’t use them.

So, the easy-peasy job of dropping the rudders and replacing the bearings turned out to be just as we expected – a pig of a job! Ok, dropping the rudder was easy, getting the top bearing out was OK, but the (old) bottom bearing was wedged in so tight it wasn’t going to budge with any normal sort of coaxing. Eventually the guys took to it with a hacksaw blade and removed it in pieces.

Geoff and Rob easing the rudder out

Not such an easy job after all

Then it was time to put the new bearings in – again, top one no problem, bottom one was an extra tight fit entailing much swearing and brute force. We’d checked it fitted over the rudder stock before we put it in place, but then when it came time to put the rudder stock back in we came to a full stop. It was too tight a fit! Brute force wouldn’t do it, using leverage with blocks of wood and planks underneath it wouldn’t do it, pleading ever so nicely didn’t do it, so in the end the trailer driver (looking forward to knocking off for the day) suggested that we think outside the square and lower the boat ONTO the rudder. Ever, ever so slowly of course! He had this neat remote control device that could inch the boat down onto the rudder, while Bruce called for adjustments from above – “hold” , “aft a bit”, “hold” – “forward and port a bit” and so on. It took a while but it worked and by 5.30pm we had one rudder back on with new bearings. We would’ve liked to replace both while we had the time, but, well, we didn’t have the time, so at least we have replacement bearings for the port rudder when we need them.

Our trailer driver using the remote control to ever so carefully lower the boat onto the rudder!

After that we had a couple of days to explore the north side of the island with some pretty beaches and quirky bars, and do some provisioning for the next hop to Aruba. 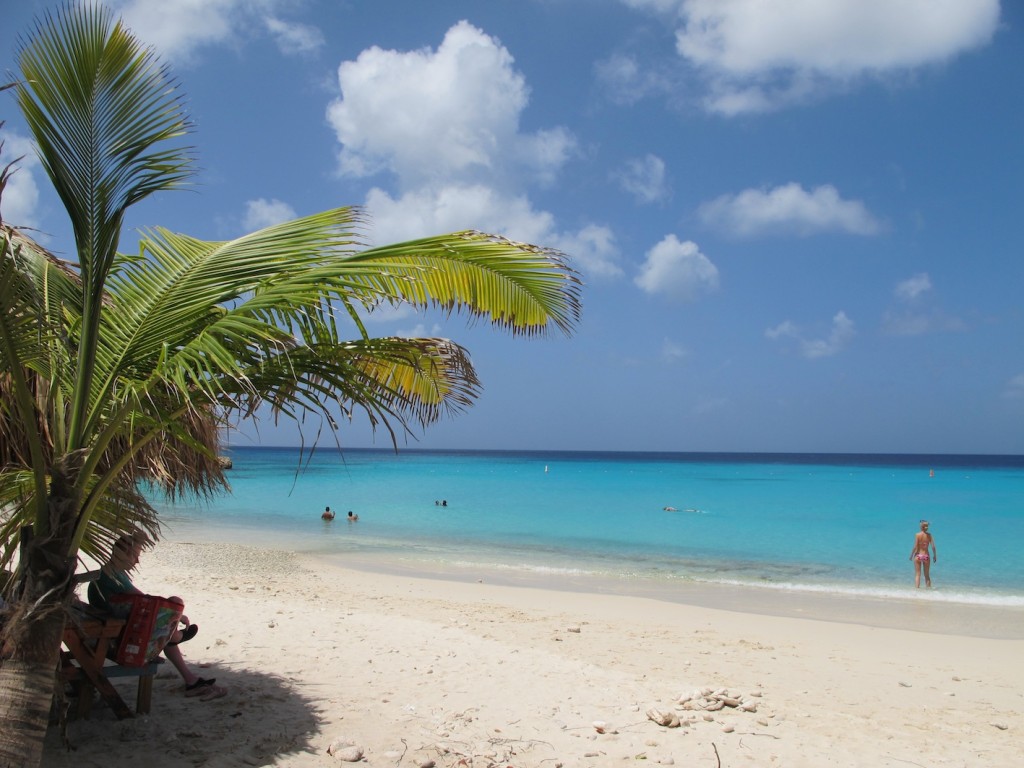 The quirky cafe up north 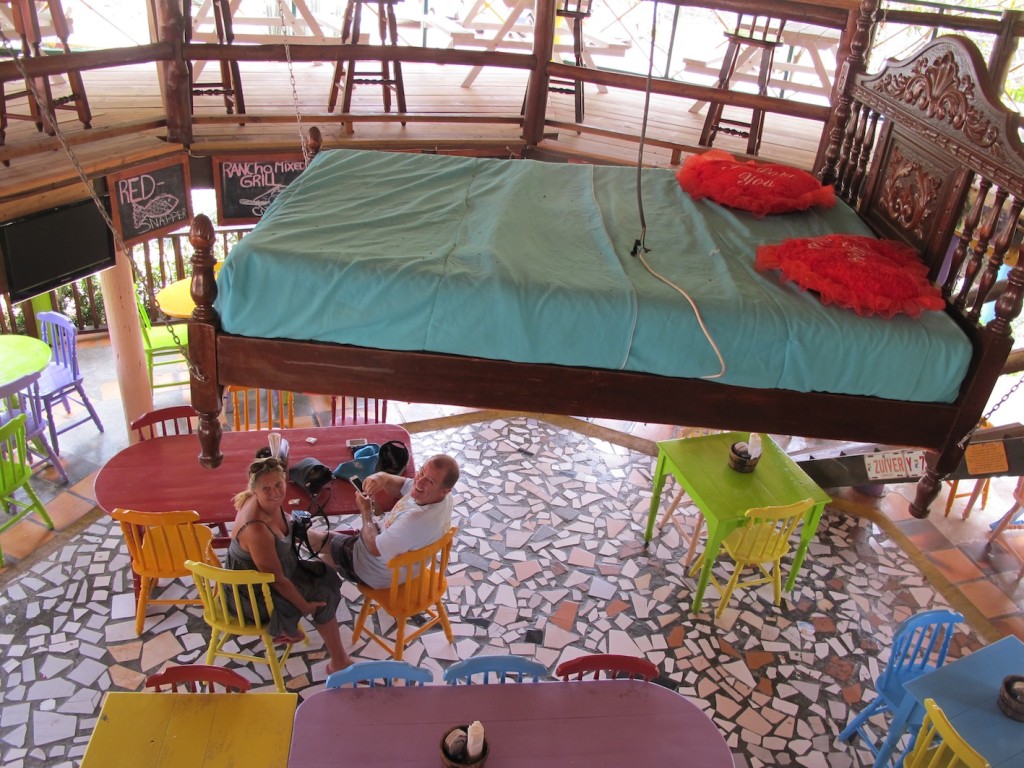 yep, it was quirky alright!

The beautiful north coast of Curacao

Sadly, with all our delays, Penny and Rob had run out of time to continue any further with us and so we said a fond farewell to them at Curacao so they could continue their European adventures. Thank you for all your contributions to Toucan and for sharing our adventures with us. Eeek, the Toucan family is shrinking!

Goodbye to Rob & Penny, bon vogage for your next adventures in Europe

We consoled ourselves with a couple of beers at the conveniently located ‘cruiser’s bar’ at the marina – a self-service honesty system, complete with TV, hammock, and comfy lounges. Not a bad set-up!

Tomorrow we have a very early-ish start (our WA family will be proud of us!) at 0430 hrs in order to get to Aruba in daylight hours. Not particularly looking forward to that one, but sometimes it’s the only sensible option in order to arrive with some daylight. This cruising life is not all beer and skittles you know!

6 Responses to The Bridge – Curacao