Who’s The Boss? – Passage from NZ to Fiji 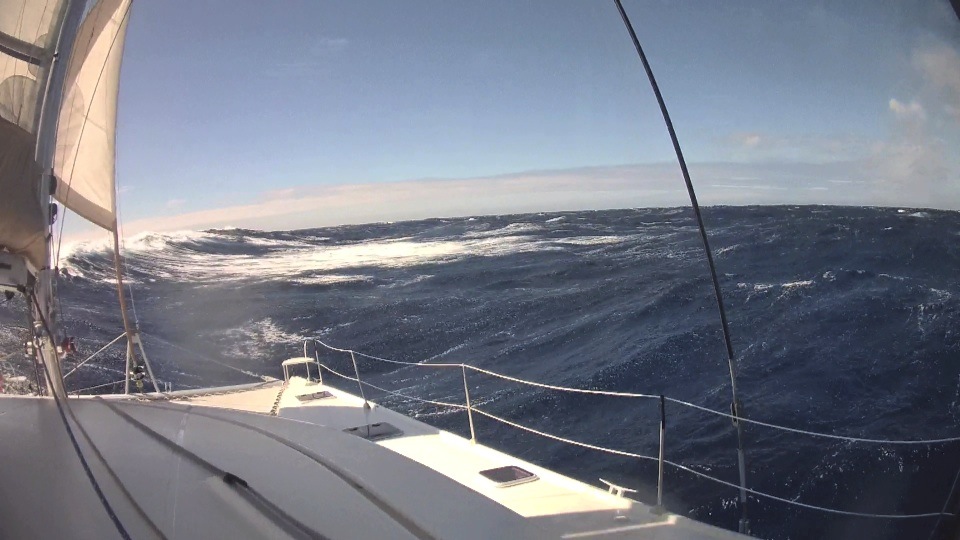 Being in a small boat in the middle of the ocean can be a stark reminder of who’s the boss out here. And it’s definitely Mother Nature, no question of that. Sailors do their best to prepare themselves and their boats, and make sure of having a good handle on the weather forecasts, but at the end of the day it’s Mother Nature who calls the shots and all we can do is respond as best we can.
This passage, more than any other we’ve done, has reminded us of this fact. We left the Bay of Islands in light winds and a large rolling swell from the North-East. The sun was shining and even the cold air and the fact that we were motor-sailing couldn’t dampen our joy at being back at sea again. We settled into our watch routines (3 hours on, 6 hours off between the 3 of us) and tucked into our pre-prepared passage meals. We knew that the winds would be building, and we were expecting strong winds of 25-30kts for 24 hours or so, with seas up to 3 metres. What we didn’t know was that a low-pressure system had formed over Tonga, essentially compressing the winds on the edge of the high system we were riding. Normally the winds associated with the high would move through relatively quickly, but now they were being blocked by the low to the north, and becoming stronger. By Sunday evening we were down to 2 reefs in the main and a partially furled jib, by 4am on Monday we were getting sustained winds in the 30s, so Bruce and Sherm were woken up to put the third reef in and reduce the jib to a handkerchief size. From then on, it was just a question of hunkering down and enduring the next two and a half days as the seas built to 4 metres and the winds continued in the 28-30kt range.

For those who don’t sail, or haven’t sailed a catamaran, let me try to paint the picture for you.imagine you’re in a car with no suspension on the worst dirt road imaginable. Now imagine that with sickening regularity you’re falling into the huge potholes that litter the road, which slam you out of your seat. Oh, and there are teams of people lining the road with fire hoses that are randomly aimed at you. And of course, the road itself is moving and pitching and throwing you first one way then the next. A roller coaster ride has nothing on this!!

Thankfully, Bruce has rigged up a repeater autopilot unit inside so at least we can now be warm and dry, and monitor the instruments from the saloon. To date, our list of breakages and gear failure has been thankfully minor one stanchion base sheared off that the kayak was attached to, thanks to a large breaking wave over the bow. Bruce and I did a commando-crawl rescue mission to retrieve the kayak, which is now ensconced in the cockpit as it’s too rough to try and re-tie it somewhere else. And during one of the pothole incidents, the kettle flew off the stove and the handle broke (luckily it wasn’t full of boiling water). The chart plotter has given up the ghost (we only used it for recording our log as we use the ipads for navigation), and the new wind gauge has gone crazy, doing loop-the-loops and telling us lies about our wind speed, which in turn sends the autopilot into standby mode every so often.
Sadly, all of this is put into perspective as a minor inconvenience compared to the tragedy that has unfolded to the west of us. The details we’ve been getting are still sketchy, but it appears a 20m yacht was dismasted in the worst of the weather, with one crew member deceased and another missing after being washed overboard. The remaining three crew have been rescued by a freighter and the abandoned yacht is now adrift, with yachts on passage being advised of its position to avoid collision. Our hearts go out to the families and the crew of the stricken yacht, and all of us out here on the water are deeply saddened and shocked. It’s a dreadful and sobering reminder of how quickly things can change and reinforces our respect for Mother Nature.
With the wind and seas now abating slightly, we’re having a more comfortable ride and with luck should be at Minerva Reef tomorrow lunchtime. We’re looking forward to a couple of days rest there, and the chance to experience being anchored in a reef lagoon in the middle of the ocean. No photos I’m afraid as this is a remote posting, but photos will follow once we have internet in Fiji.

6 Responses to Who’s The Boss? – Passage from NZ to Fiji