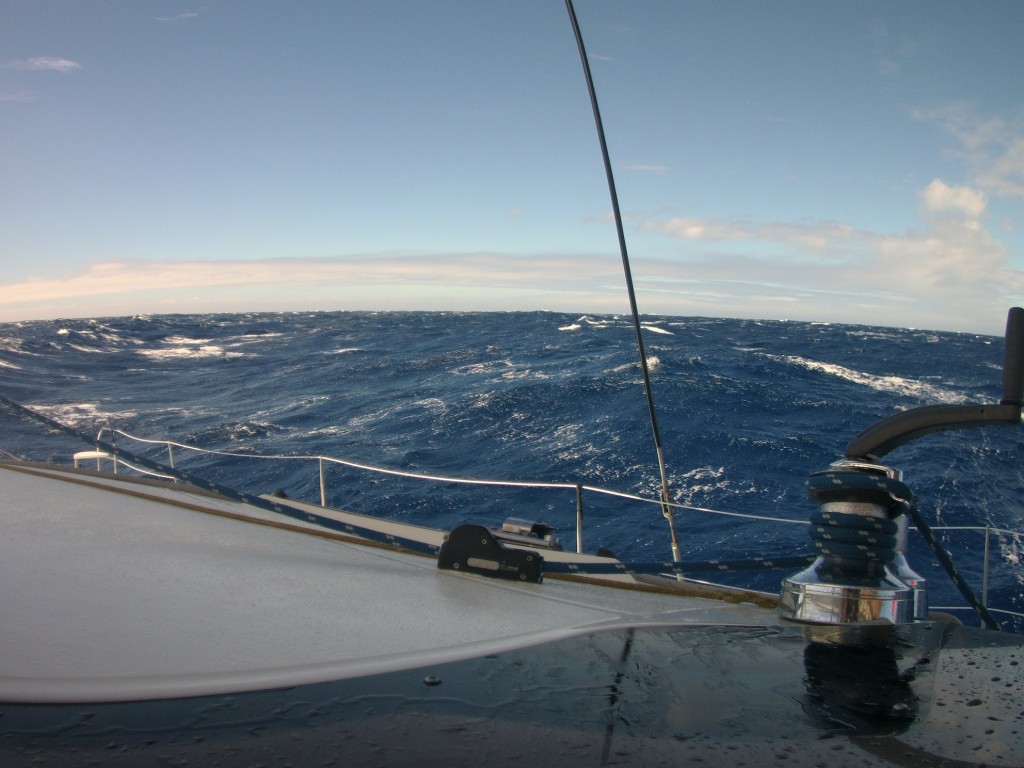 On passage NZ to Fiji

They say timing is everything, and this time we just couldn’t get it right. The strong winds that we’d had for the last three days suddenly stopped when we were 35nm away from Minerva Reef. On went the motor and we looked forward to an easy entrance into the reef later in the day. But Huey, the wind god, had other ideas.

Three hours later the wind came back with a vengeance, topping out at 30 kts. The sea hadn’t had a chance to subside, and was now being whipped into a frenzy, with the tops being blown off the waves and the occasional 4m wave crashing over the cabin top. Thank goodness we hadn’t shaken any reefs out of the main! As we approached Minerva it was obvious we didn’t have a hope in hell of getting through the reef pass, so sadly (very sadly) we altered course for Fiji, giving up our dreams of a quiet night or two at anchor and some nice snorkeling. I’d even got some NZ lamb chops defrosting to put on the BBQ. Well, obviously THAT wasn’t going to happen!

Five hours past Minerva and, you guessed it, the wind dropped again. Huey was teasing us. From then on we didn’t see any more than 5-10 kts wind, and had to put the motor on for assistance. The weather was very changeable – beautifully sunny one minute then the rain clouds would roll in and we’d get a deluge.

Bruce & Sherm enjoying a rare sundowner moment in the cockpit. Probably the one and only on the trip.

We saw plenty of rainbows and had a spectacular thunderstorm at 2am in the morning which wasn’t pleasant but at least the rain washed all the salt off the boat. 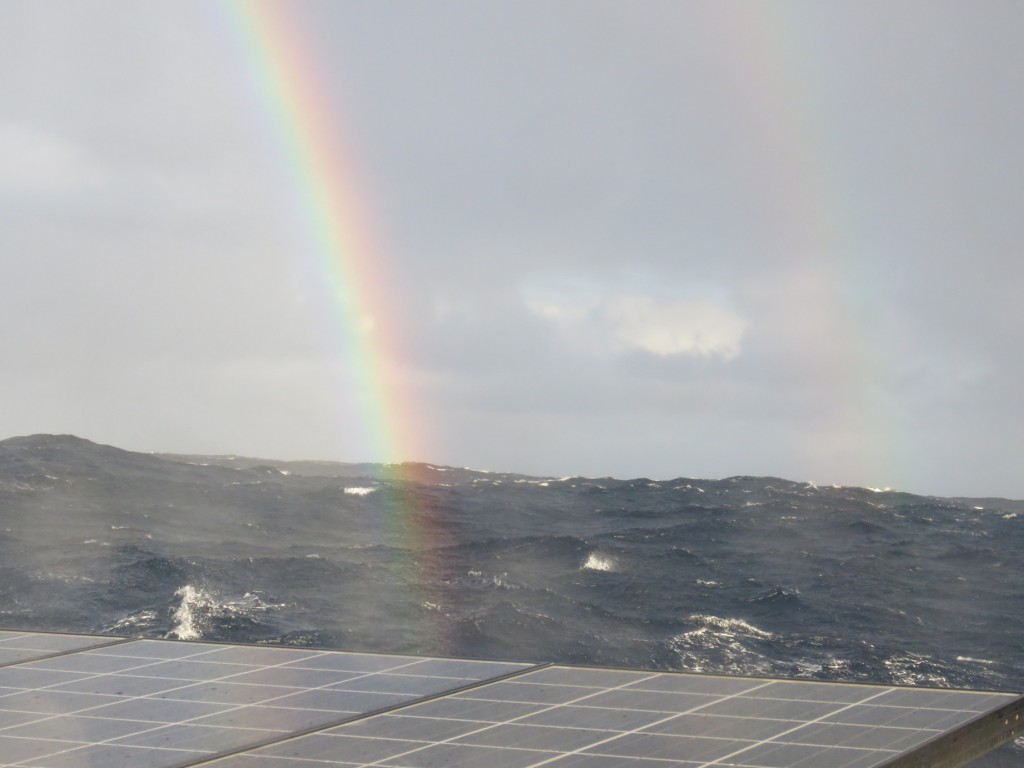 Looks like we’re at the end of the rainbow!

The best moment of the trip? Sitting in the cockpit just after dawn on a sunny morning, nursing my cup of tea. All of a sudden there’s a huge exhalation nearby, and a humpback whale surfaces less than 100 metres from the boat, curious to have a look at this strange beast alongside him in the ocean. Magic! We also managed to catch one tuna on one of the calmer days, so we now have a well-stocked freezer and enjoyed some sashimi and tuna steaks that night. 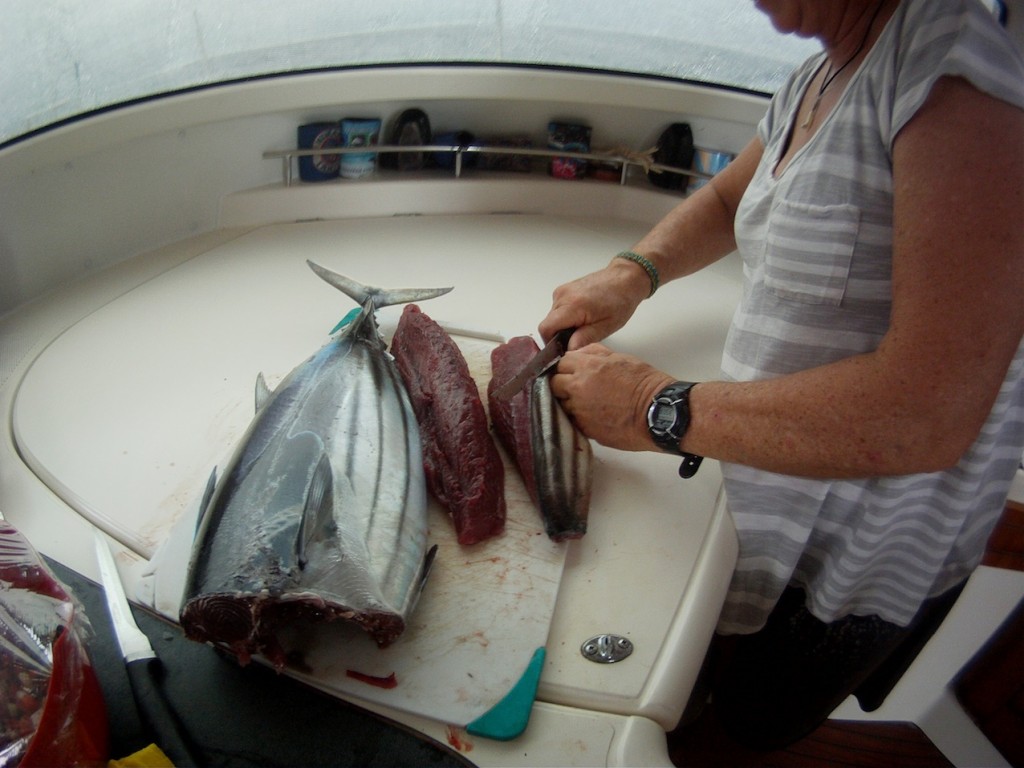 Di filleting the tuna after Bruce did the dispatching. It’s a team effort on Toucan!

As we neared the southern islands of Fiji, timing became an issue again. If we kept going we’d arrive on Sunday, which attracts significant overtime fees for clearing in. We were nearing Totoya Island and thought we might be able to creep in on the western side and drop the hook to buy a few hours of time. But no, by the time we got there the light was fading fast and it was too hazardous to attempt a reef entry. So on we went, trying to slow the boat down as much as possible. Of course, Huey started messing with us again and the wind increased just when we didn’t want it to. In the end we arrived off Savusavu at midnight. We didn’t fancy having to stand off for several hours waiting for daylight, so we cautiously made our way in to the anchorage and dropped the hook just before 1am on Monday morning. A total of 8 days and 15 hours since we left Opua. I can tell you it’s a great feeling finally to have made it to Fiji, and to have that challenging passage behind us. And to be back in T-shirts and shorts!!

6 Responses to Bad Timing – Passage from Opua to Fiji, Pt 2