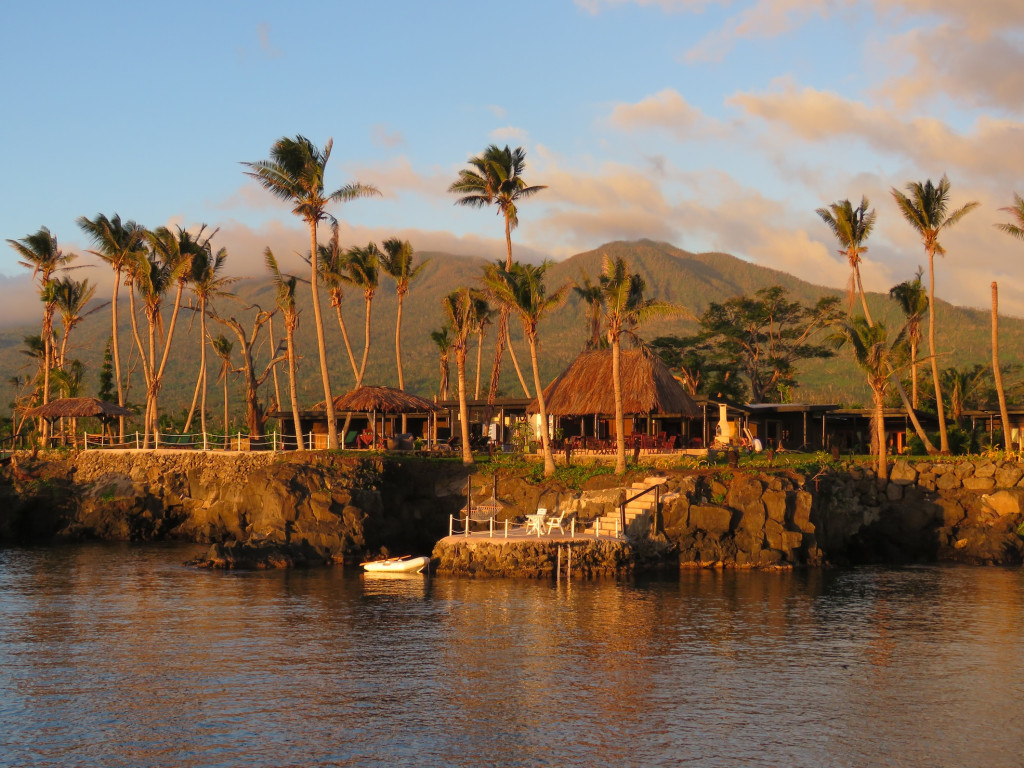 Moving east or south-east in Fiji is tricky because those south-east trades blow constantly at this time of year. So when we saw a wind shift to the north-east we thought we’d better take it, despite the fact that it came with a trough bringing rain and crappy weather. (Still better than motoring, according to the skipper). For once I wasn’t arguing – Savusavu is a nice place to hang out but it’s easy to get lulled into a kind of ‘cruisers comfortably numb’ state. I get itchy foot syndrome quicker than Bruce so I was more than happy to up sticks this time. And there was the small matter of a birthday dinner to look forward to!

Our destination was Paradise Resort, on the south-west corner of Taveuni Island, approximately 40nm away. But our first stop was the huge distance of 3nm down the bay to the Cousteau Resort, where we anchored out for the night. The resort was badly damaged by cyclone Winston, and was still closed for repairs. 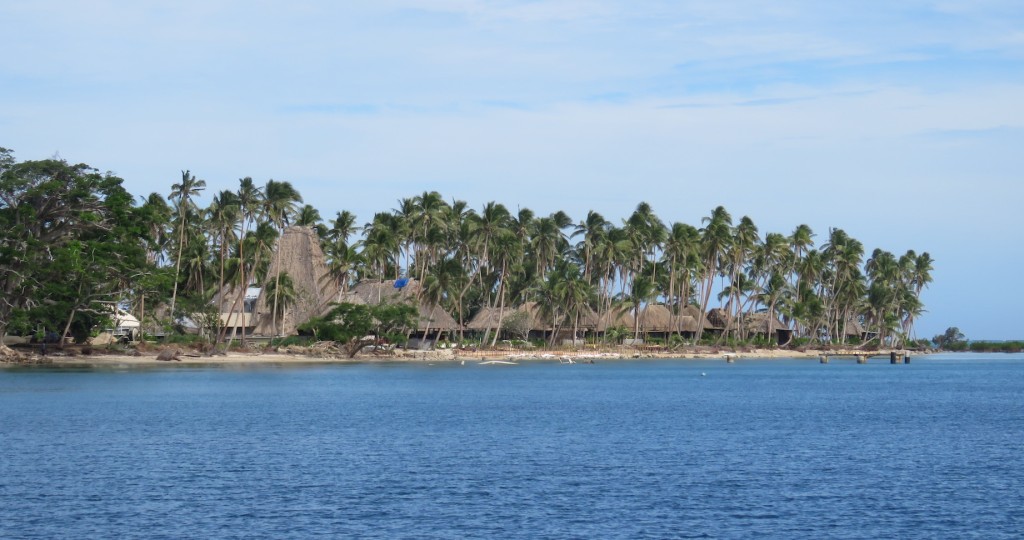 Cousteau Resort in the repair stage 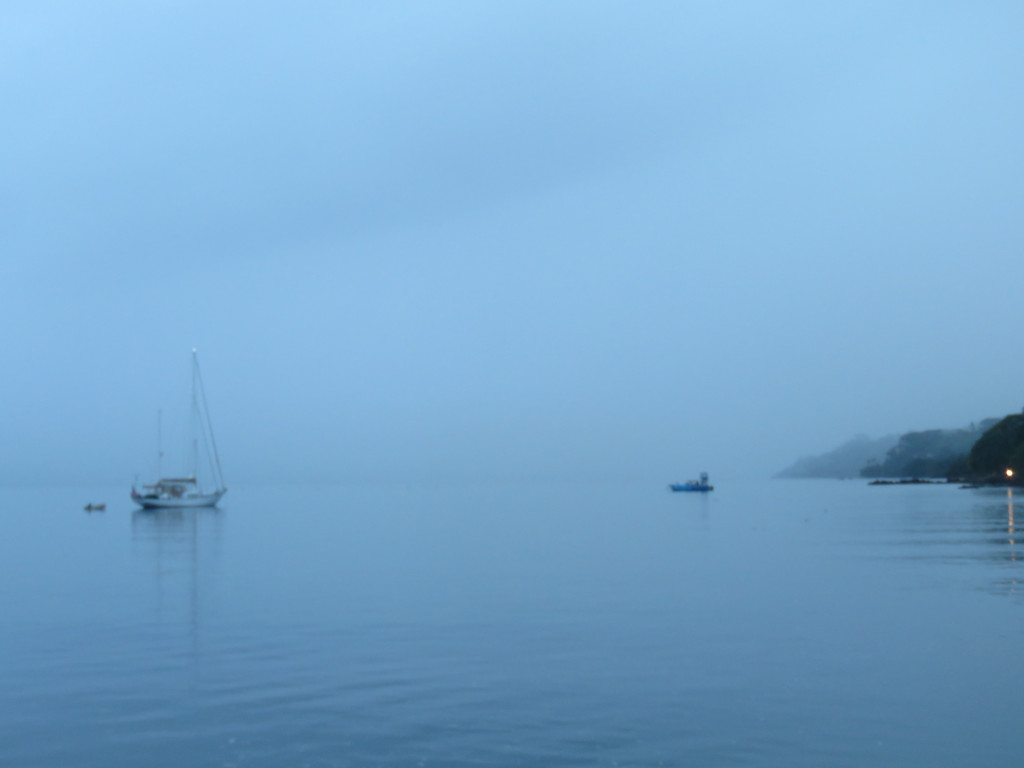 A foggy, drizzly morning at the Cousteau Resort anchorage

The next morning there was fog and not a breath of wind. So we motored out into Somosomo straight (complete with grumpy ‘not happy about motoring” skipper at the helm). Mercifully the wind filled in during the day and we ended up having a great sail. 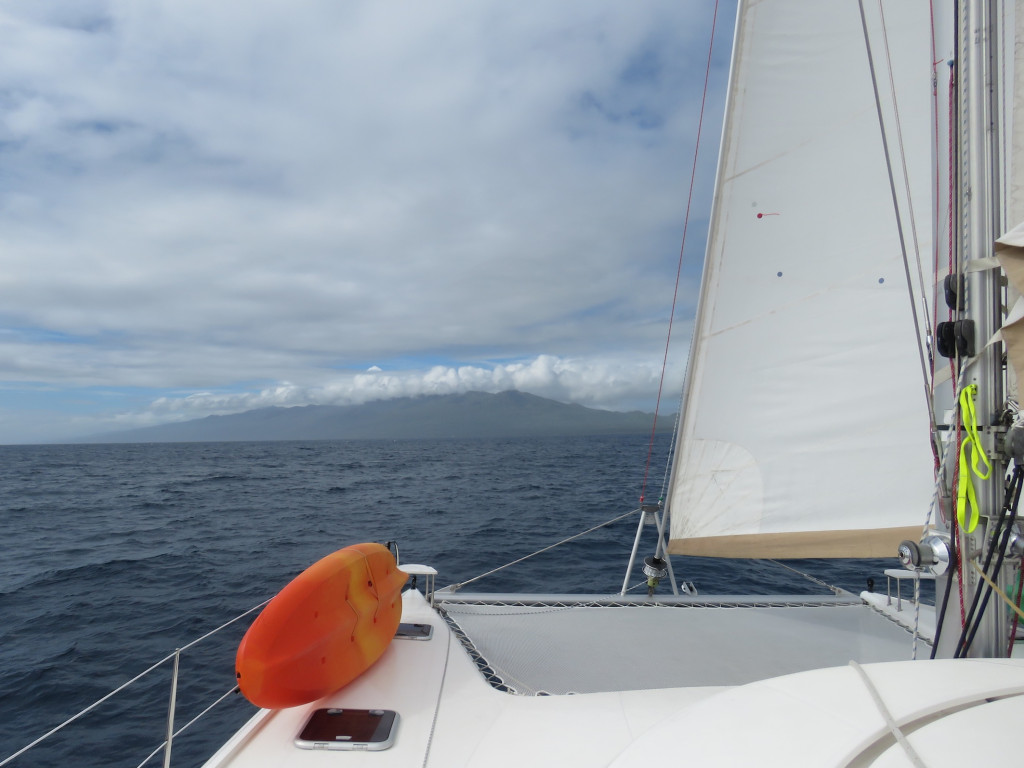 But by the time we got to the resort it was blowing 20 kts, with no protection from the seas or wind. Hmmm—don’t tell me this is paradise!! We were counting on the conditions to ease later in the day, so we took a punt and picked up one of their moorings and rocked and rolled while we waited with fingers crossed. 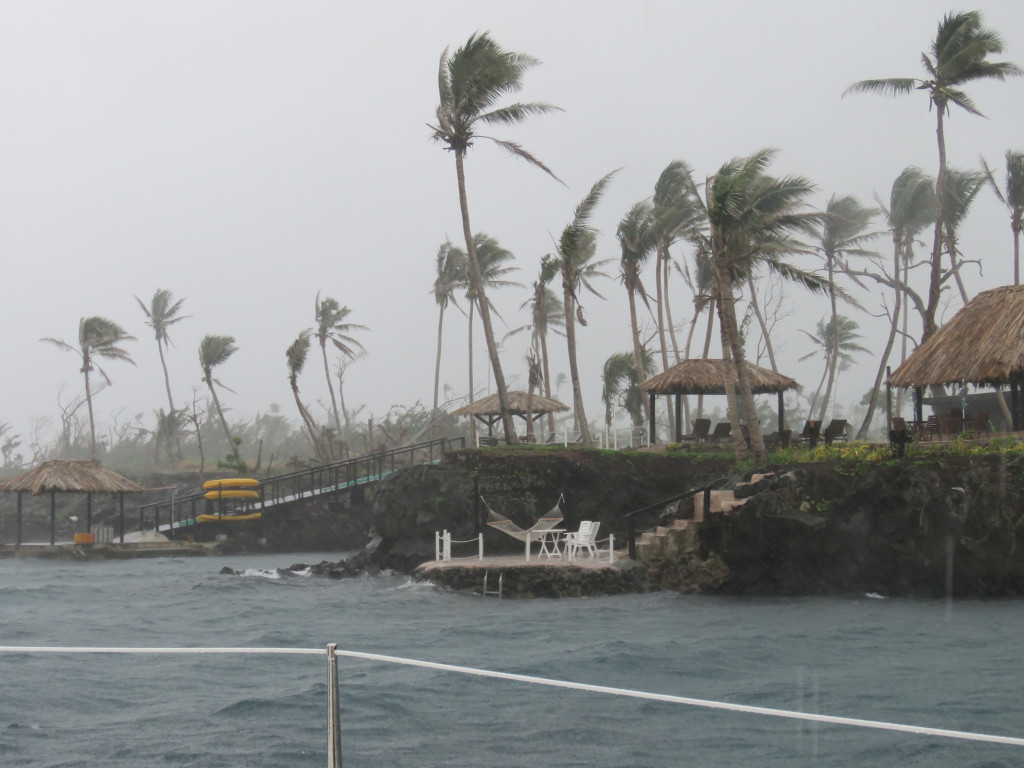 Paradise on a bad day!

And hey presto, in a few hours the wind had shifted round to the south, and the next morning it was like we were in a completely different place. Now that was a nice birthday present! 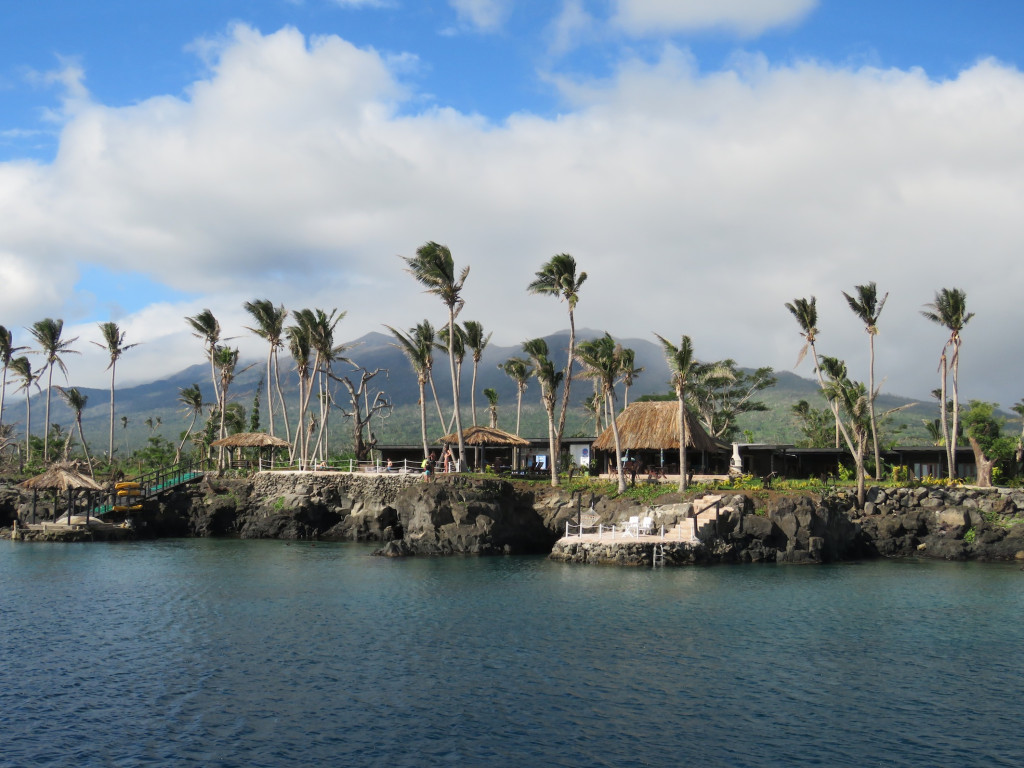 Alan and Terri, who own Paradise Resort, are very welcoming to yachties, allowing us to use their moorings free of charge (there are at least three available, approximate position 16 56.04S, 179 54E) plus the use of the resort facilities. Again, they suffered extensive damage from the cyclone and have only just re-opened. Most of the guest cottages have been re-built and the gardens are being replanted. The resort is low-key but the staff are a friendly bunch, so it’s a fun atmosphere and there’s a pool and spa if you so desire. I’m sure it’ll take a while to get back to its’ former glory, but it’s good to see that they had plenty of guests. 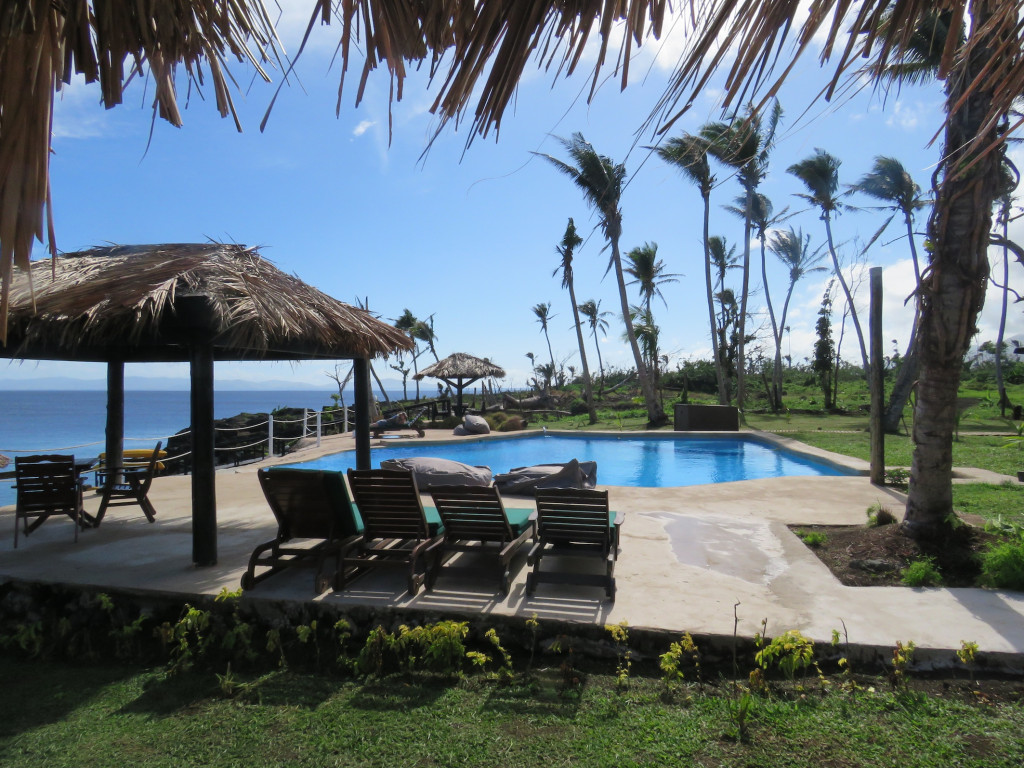 the pool at Paradise Resort

Sadly the reef will take longer to recover from its’ battering, so while there was still plenty of fish life, the coral has been reduced to rubble off the front of the resort. I didn’t care though – it was wonderful to get into warm water and have the first snorkel of the season!

plenty of fish of all shapes and sizes

In the evening Bruce treated me to cocktails and dinner at the resort. We were joined by Jack, a single-hander kiwi on “High C’s” who arrived about the same time as us, so we had a very pleasant evening together. (I have to say the food was a bit disappointing, but hey I didn’t have to cook so I can’t complain!) Jack is an accomplished guitarist and has offered to give Bruce some ukulele lessons -we now have 2 guitars and 2 ukuleles on board, but with no skill between us we’re in desperate need of tuition! 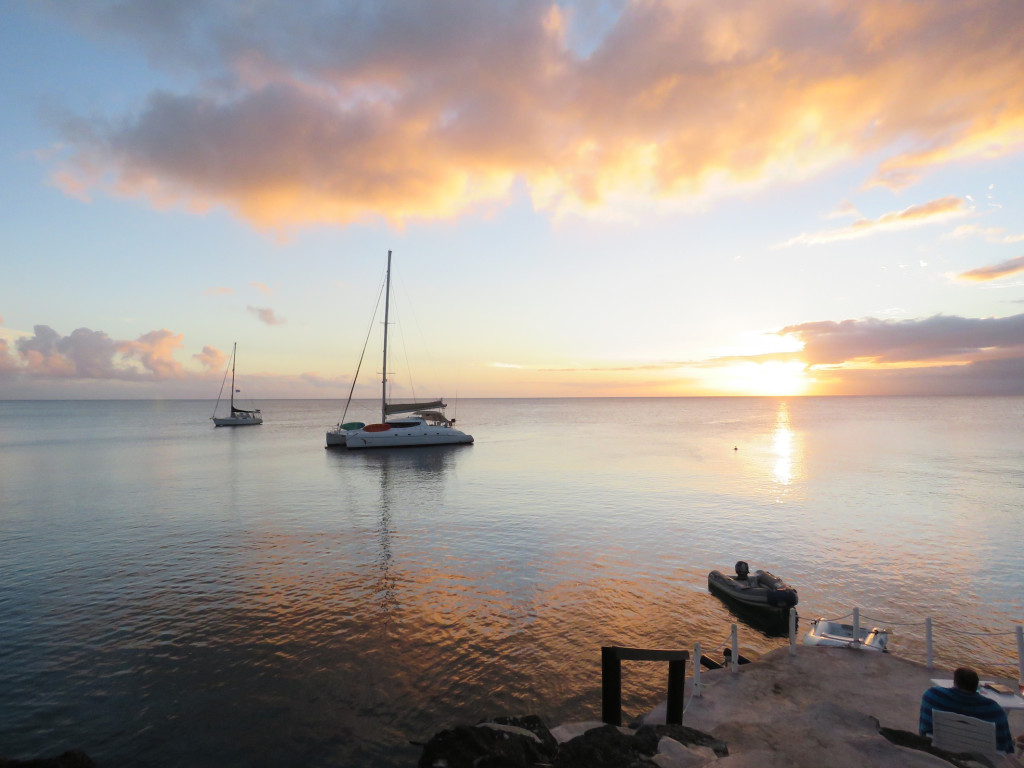 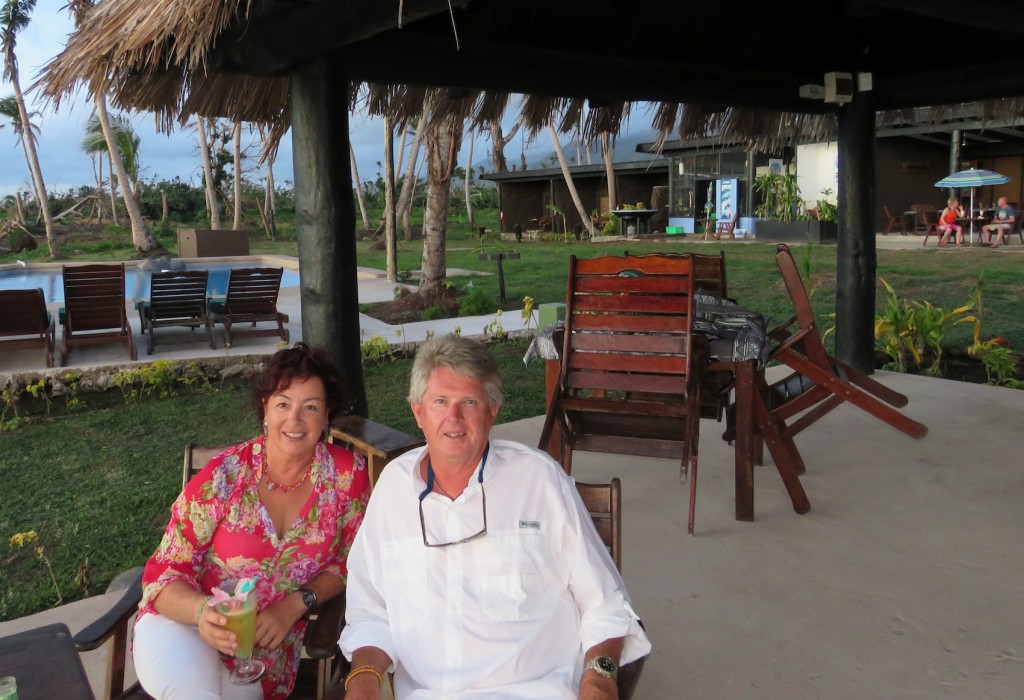 No birthday is complete without a Fou-Fou drink

We spent a few days here, doing a few more boat jobs (always, always there are boat jobs!), snorkeling and just chilling. Our other reason for coming to Taveuni was to deliver some of the aid supplies donated to the villages affected by the cyclone. We loaded up the dinghy with the 101 cans, rice and a bilge pump for the desalinator at the local village and handed them over to Alan to store until they could be distributed. 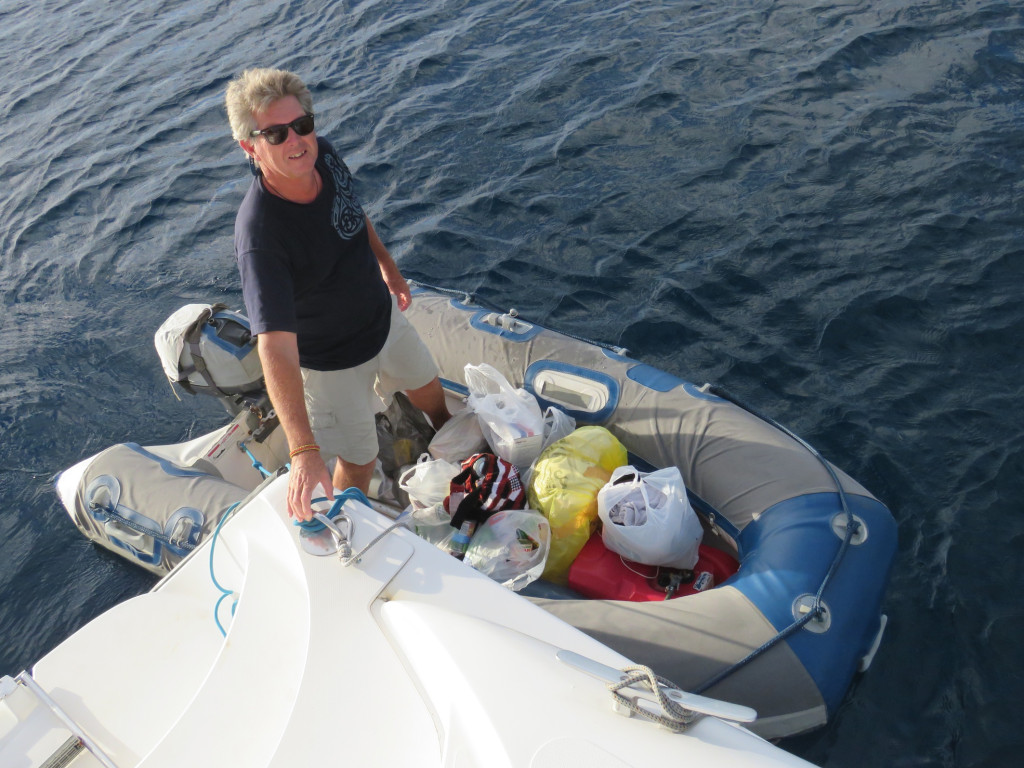 Deliveries from Sea Mercy for the village

On our last night we went back into the resort for their ‘Fijian’ night – music and dancing supplied by the staff, and a traditional “lovo” feast. Similar to the New Zealand “Hangi”, ”lovo” is a method of cooking food in an earthen pit, using coconut husks and hot stones, the whole lot covered with taro leaves. The chicken and pork are wrapped in banana leaves, topped with taro or sweet potato and cooked for several hours. 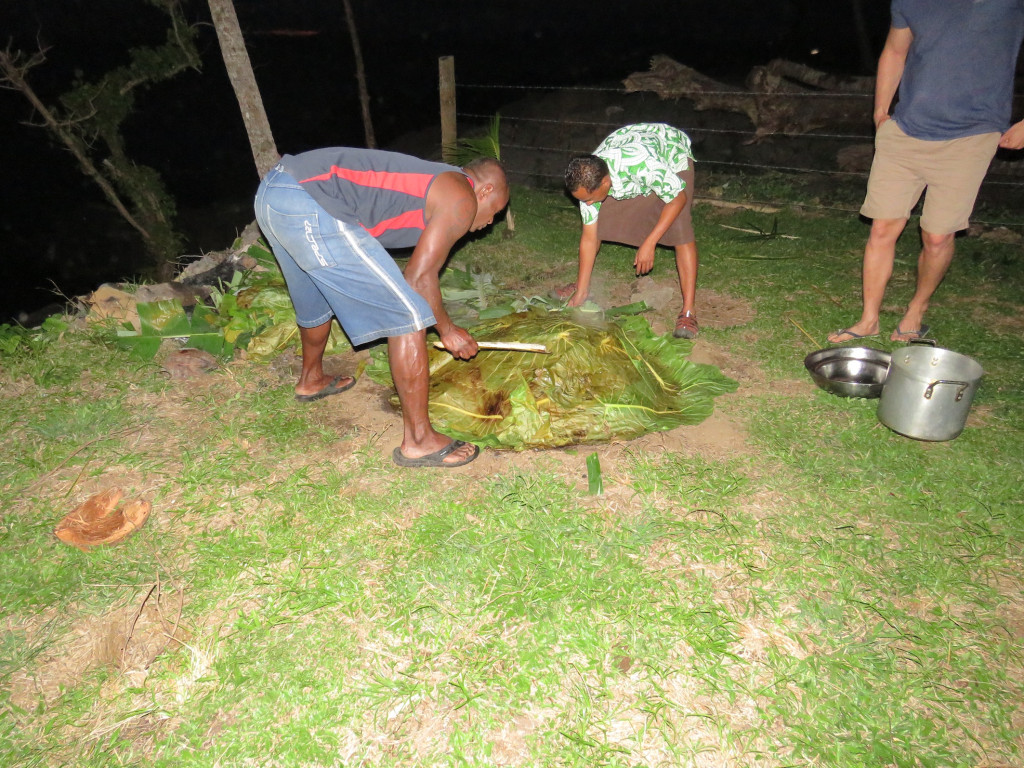 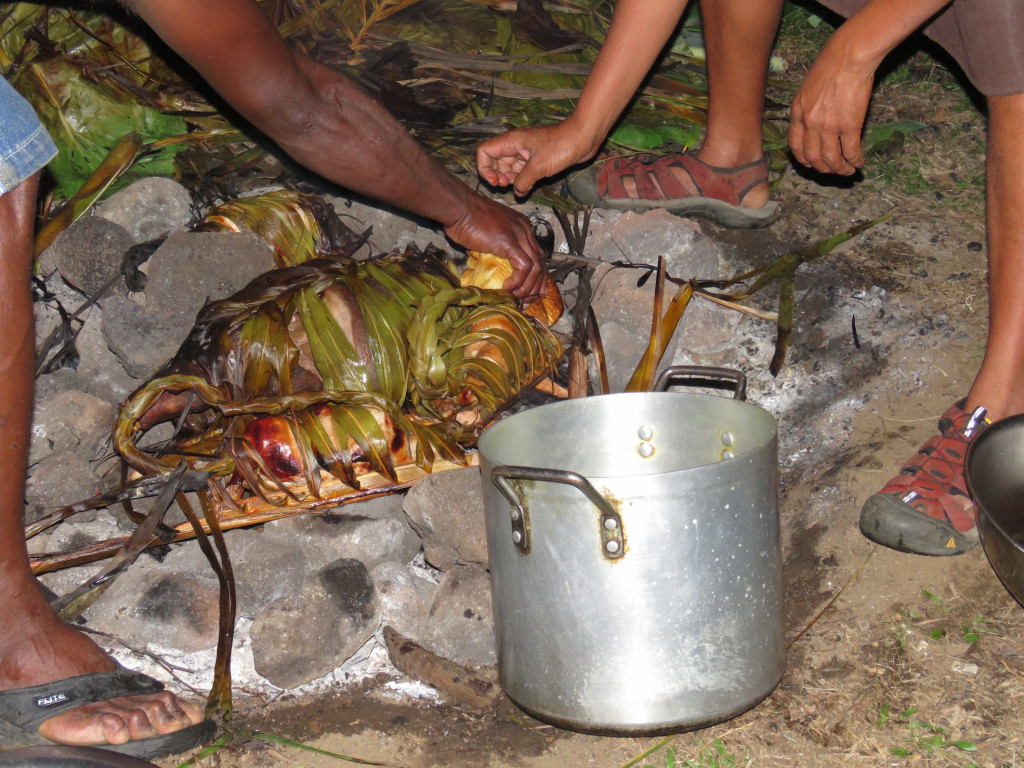 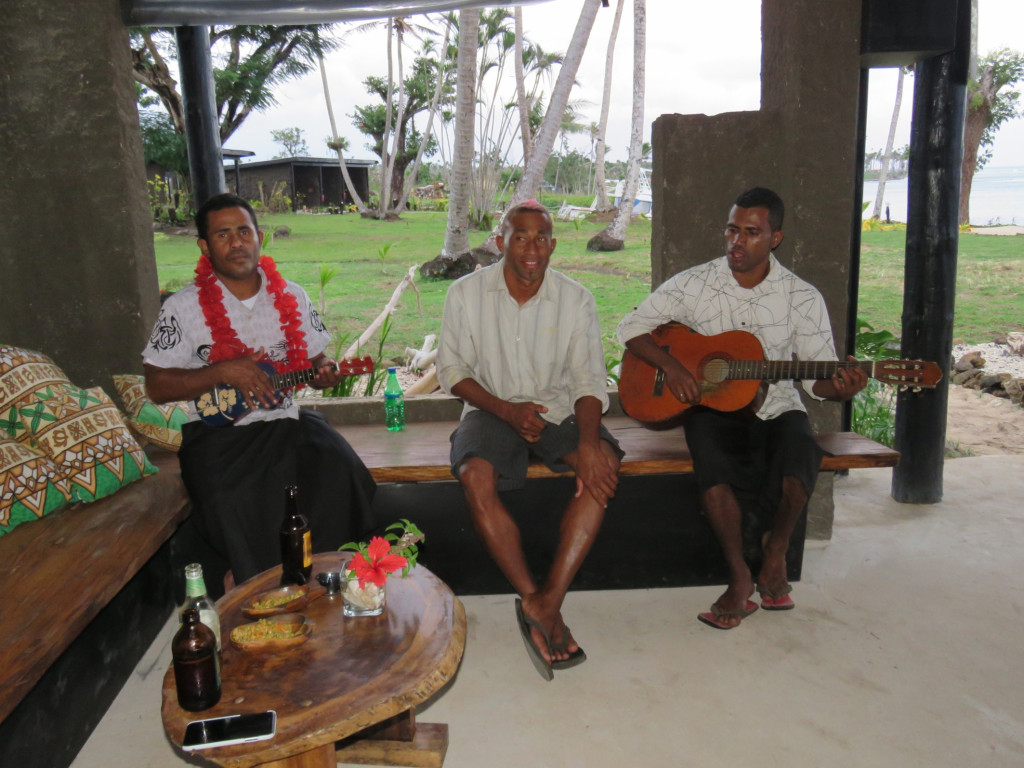 music provided by the staff 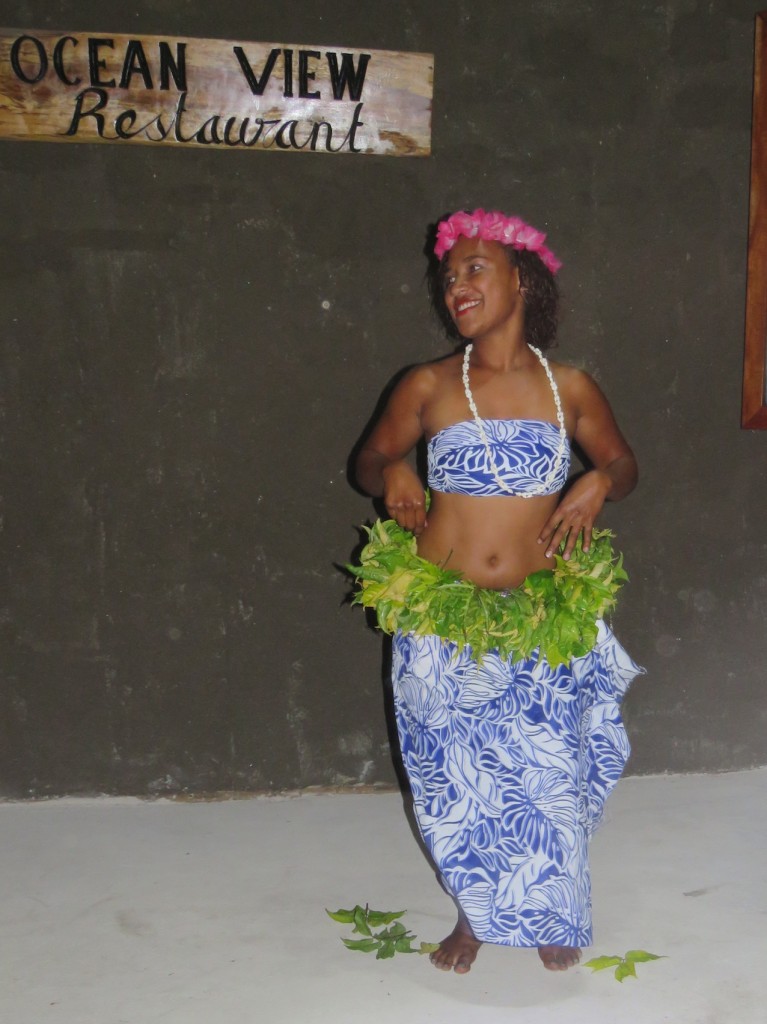 As well as dancing… 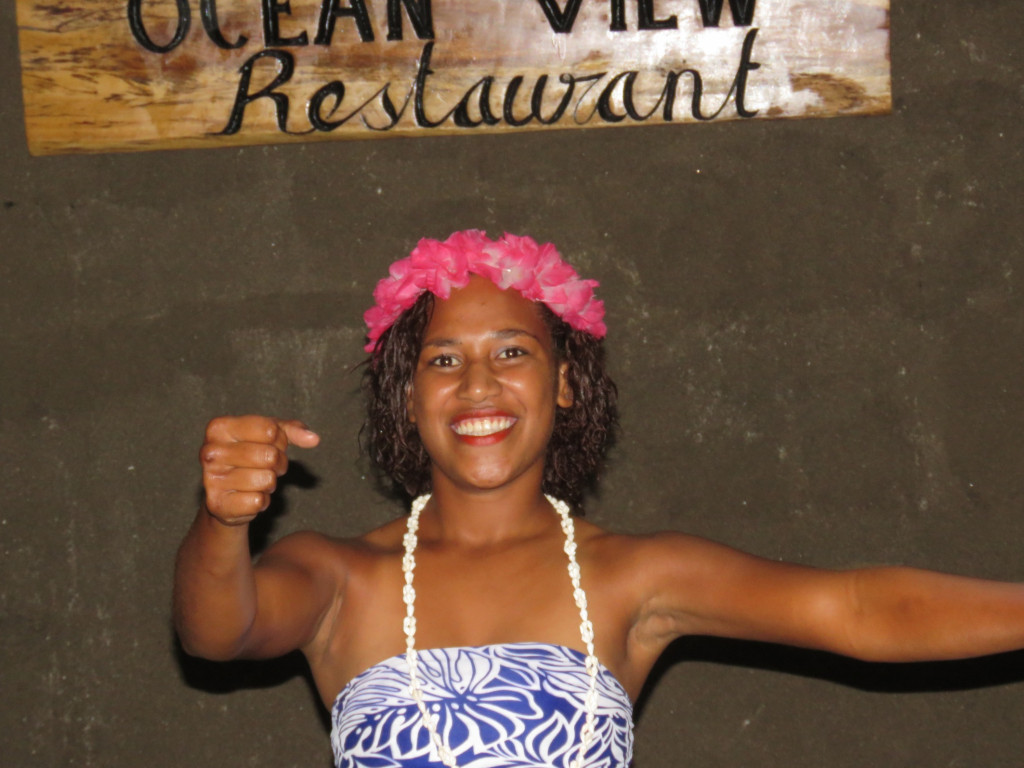 At the end of the evening it was time for the kava ceremony. We’ve had kava before in Vanuatu, so we knew what to expect it terms of the taste (imagine peppery, earthy dish-water and you’ve got it) but we learnt a bit more about the Fijian rituals (it seems to involve a lot of cupped hand clapping and no talking). It certainly wasn’t as strong as the Vanuatu kava, so all we got was a bit of tingling around the lips and a bad taste in the mouth. 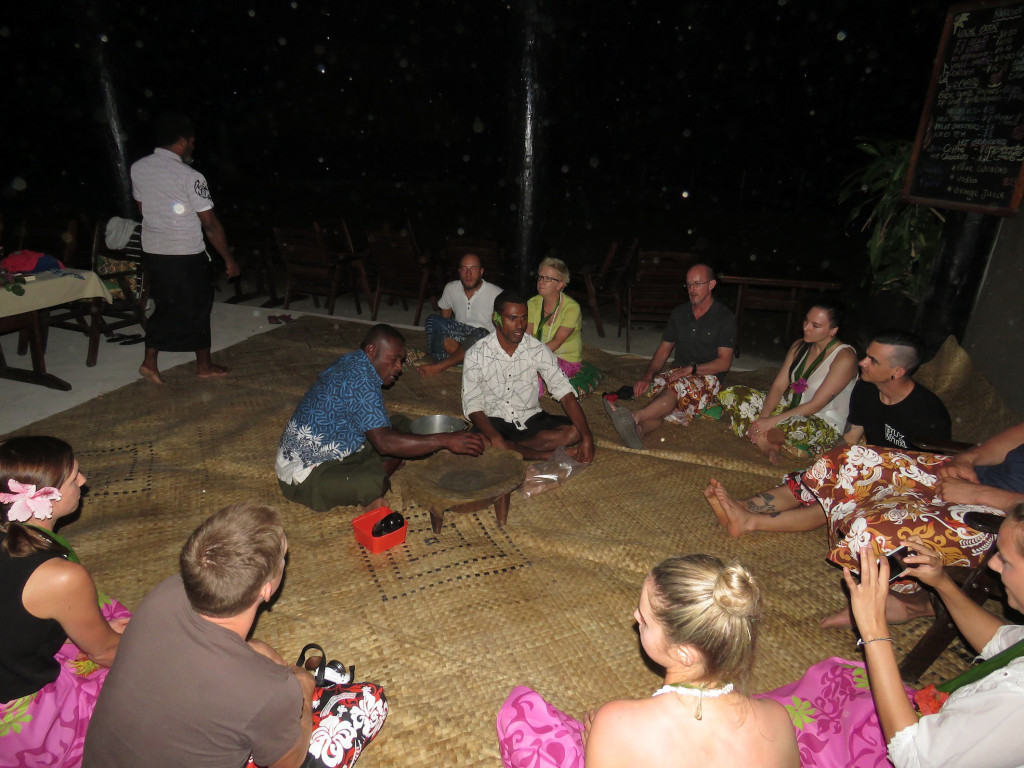 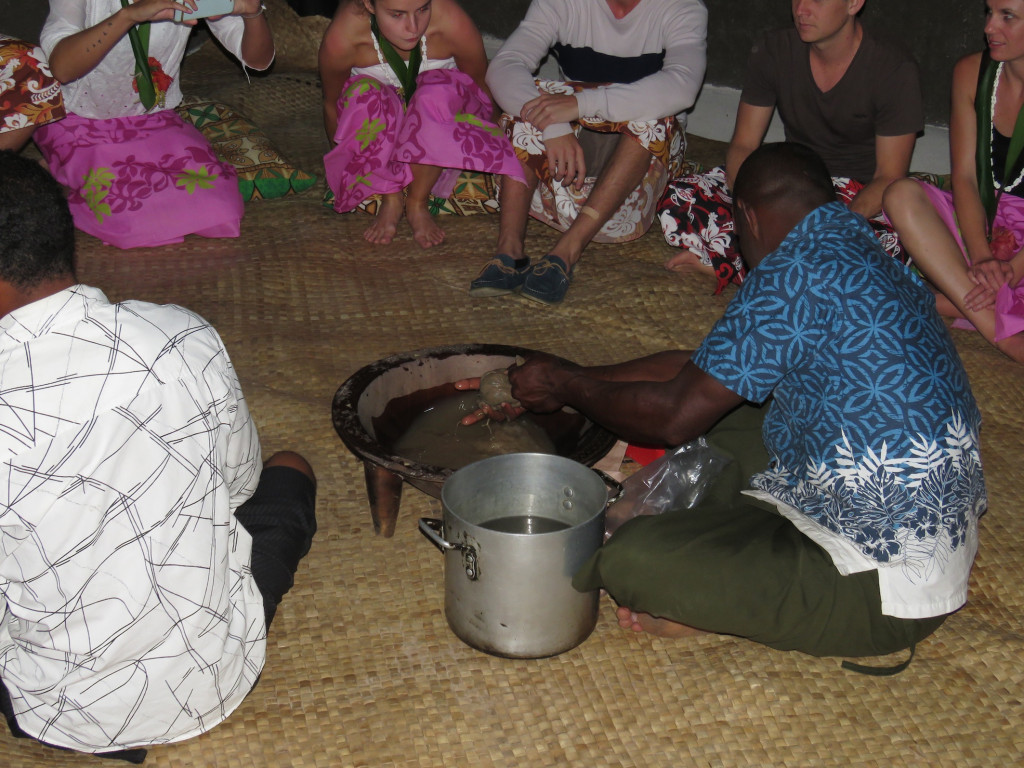 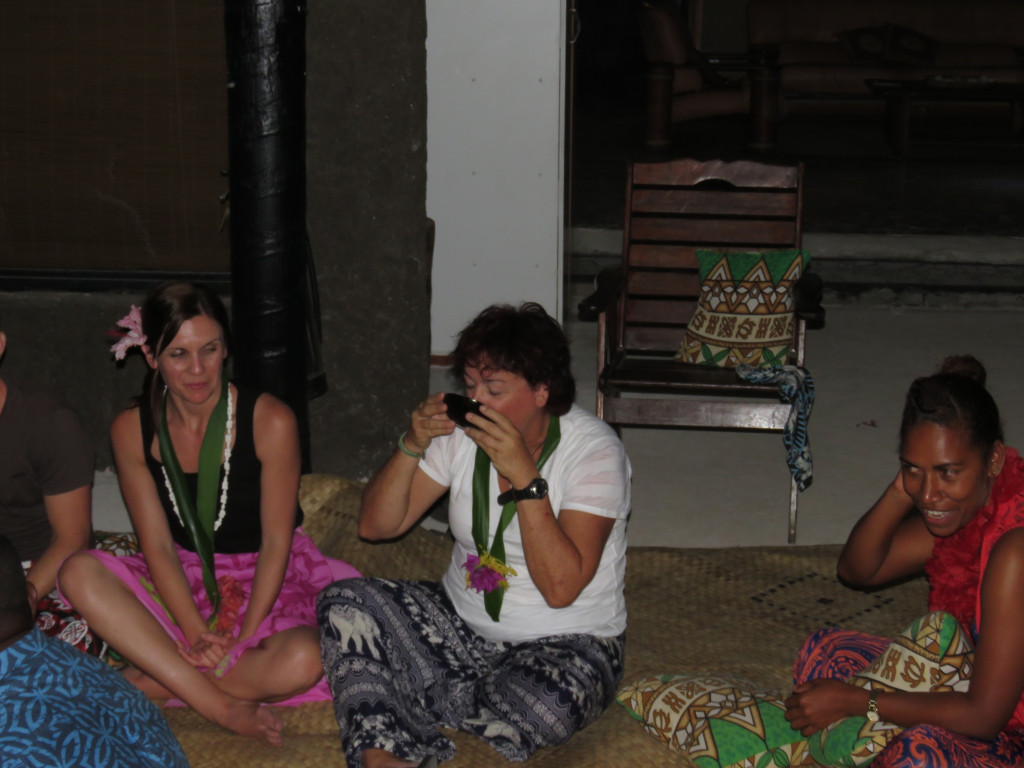 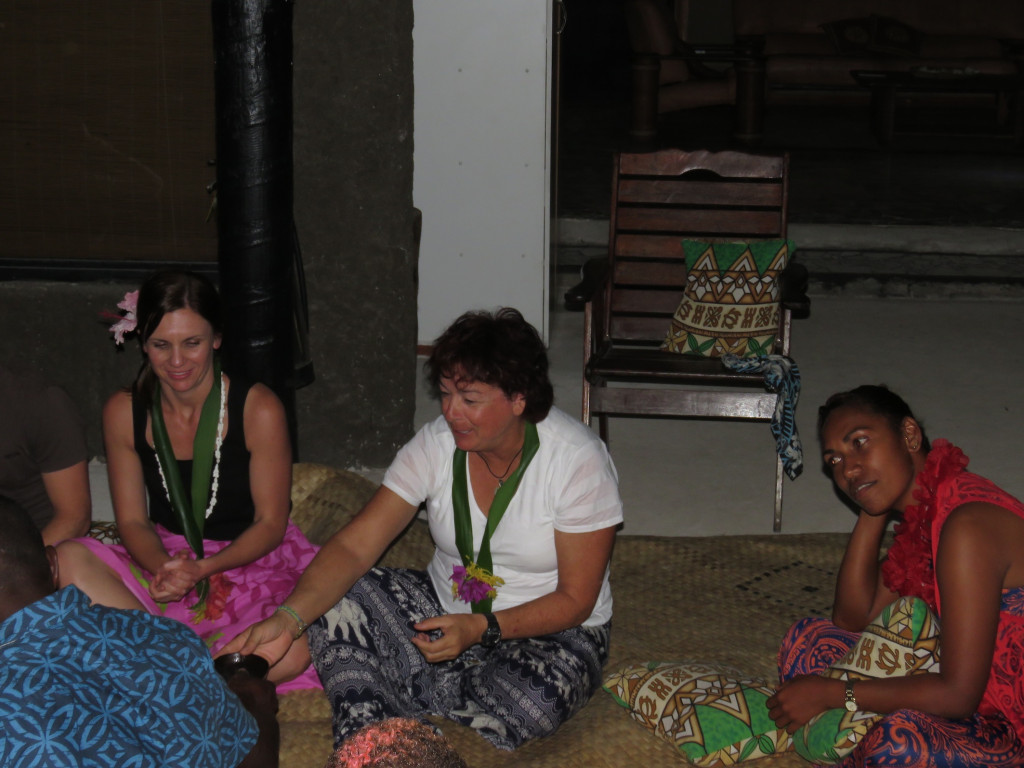 the face says it all…

I really can’t see the attraction, but with spirits at FJ$130 a bottle I guess it’s a cheap way to party. I think you’d need to consume an awful lot to get any effect though! For us, one half-shell was more than enough…..I think we’ll stick to our beer and wine, thanks.