The Others – Denarau, Fiji 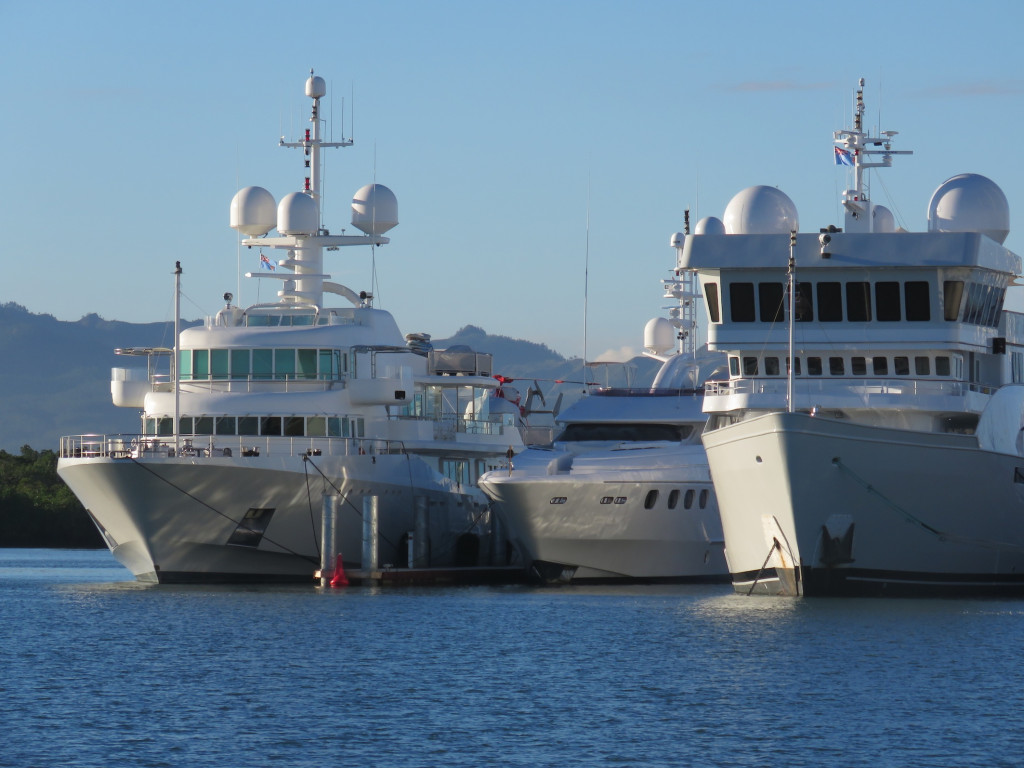 Big Boys in Denarau. It’s obviously all about the size of your balls…

Denarau is a world apart from the rest of Fiji – a gated community of big hotel complexes, big boats, and big business. It’s a giant beehive of tourism, with charter boats buzzing backwards and forwards ferrying guests from their swish hotels to the outer islands for a day of snorkeling and sunbathing. Every boat welcomes their guests aboard with traditional Fijian singing, accompanied by guitars and ukeleles, so the harbour resounds with the sound of music and the ubiquitous “BULA” shouted ever louder until the hosts are satisfied their guests are truly enthusiastic about their trip. It seems that not only does money talk here, it also sings and shouts. 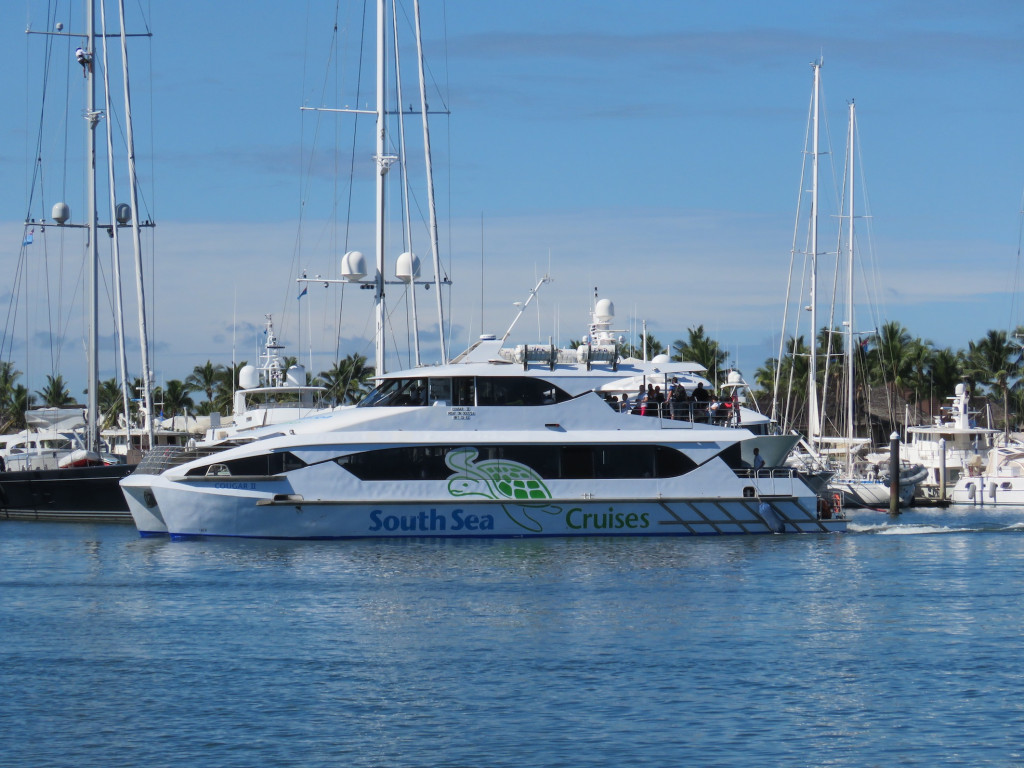 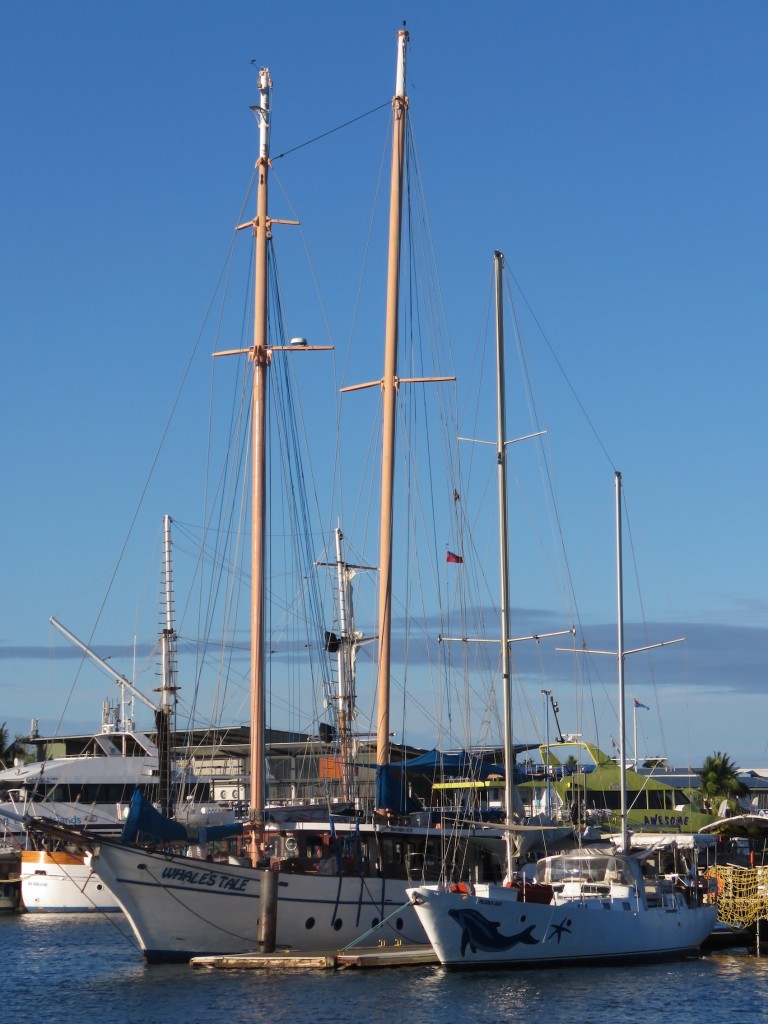 charter boats of all shapes and sizes 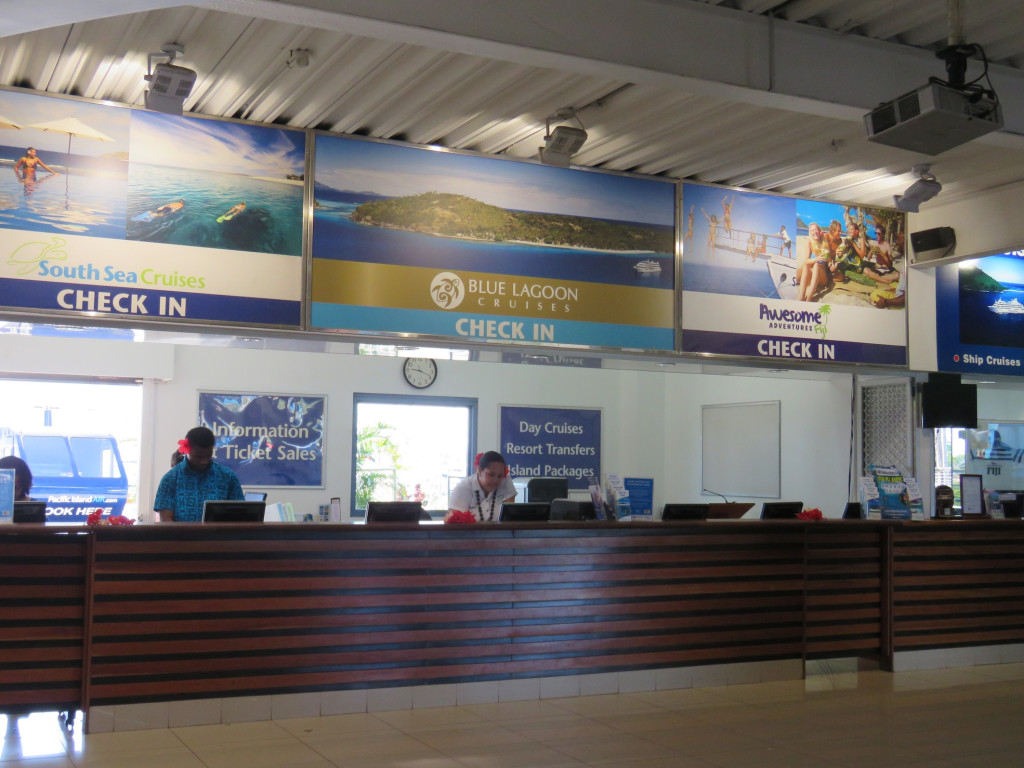 The booking terminal at Denarau 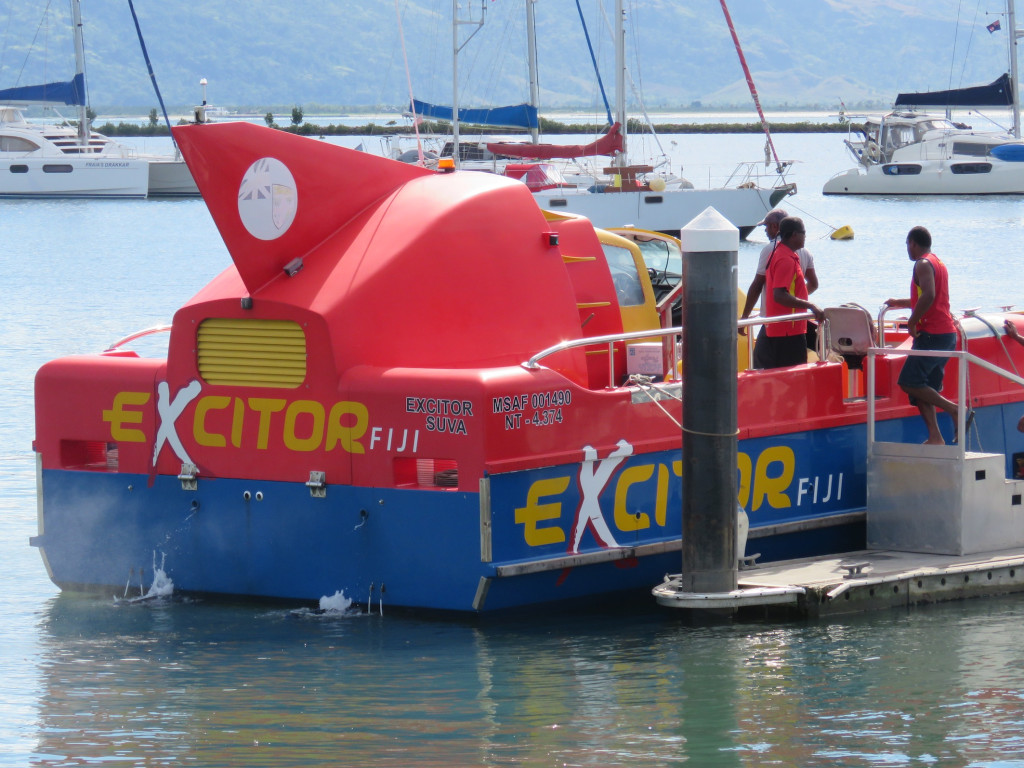 The fast jet boat takes punters out to Cloudbreak 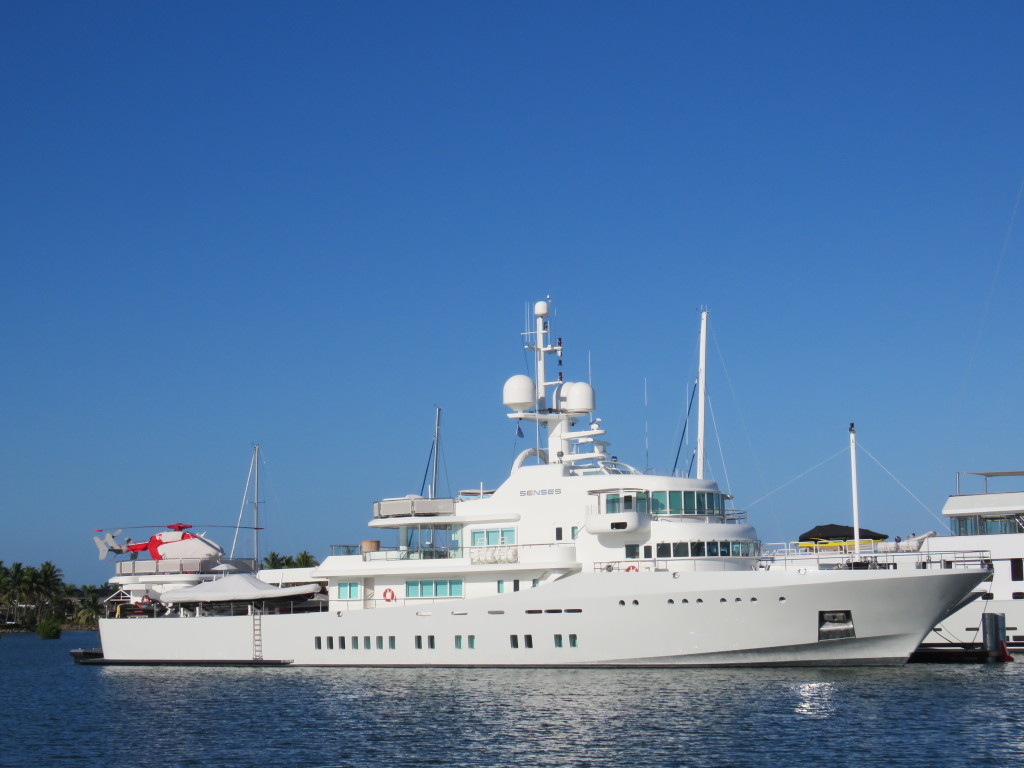 A helicopter on the back deck is de rigeur.. 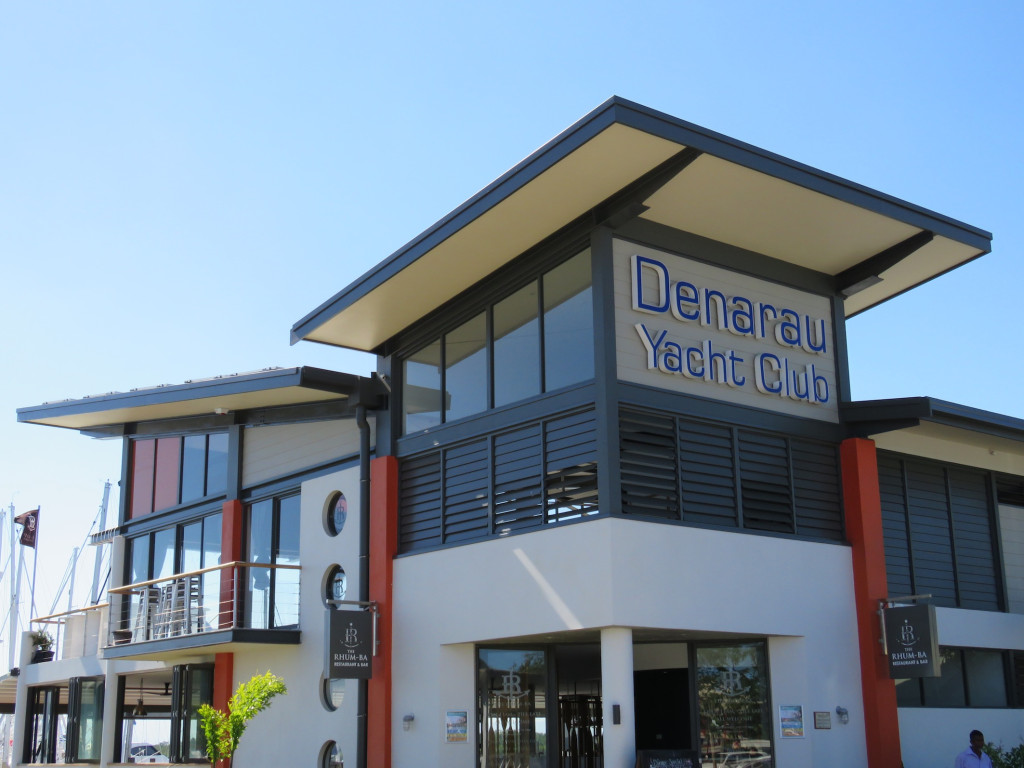 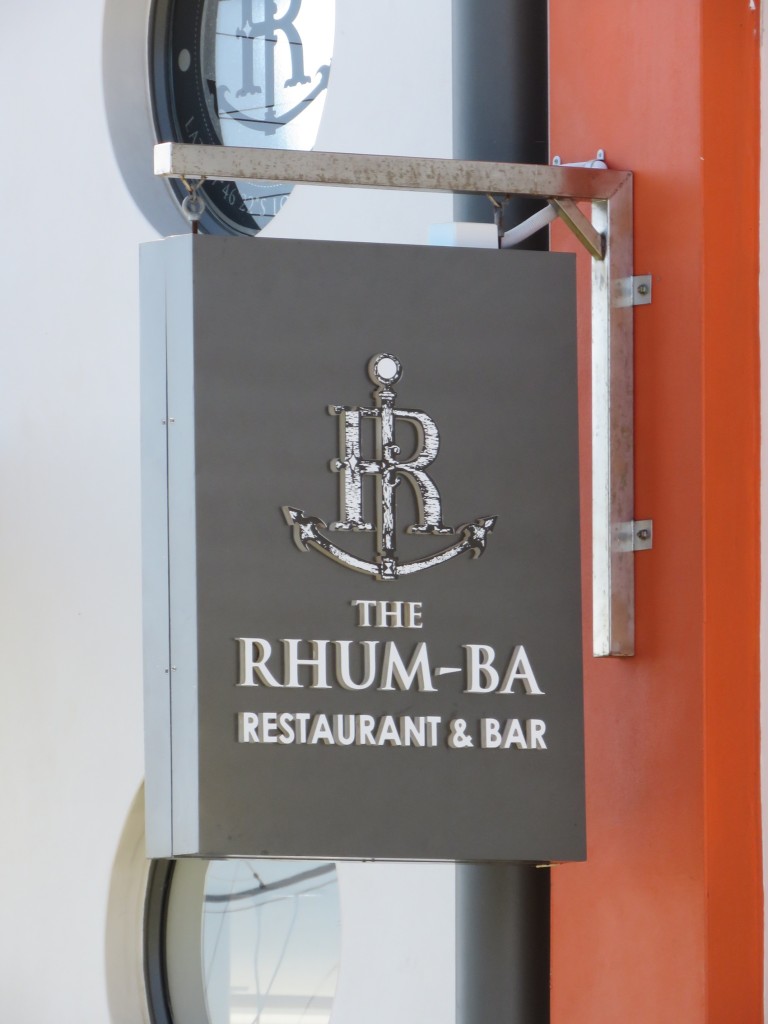 complete with rum bar, of course

In the inner harbour lies the marina with space for superyachts and smaller vessels, plus 14 moorings. The moorings were fully booked, so we anchored outside the harbour (17 45.449S; 177 23.221E) just to the east of the channel entrance along with several other boats including Escape Velocity who’d decided to postpone their passage to Vanuatu for a few days. The outer anchorage is pretty sheltered in the prevailing south-easterly winds, but the wake from the passing tourist boats made manhandling the recalcitrant freezer into the dinghy quite a feat. We dropped it off to Kooline, the local refrigerator experts to determine why the temperature wasn’t going below -5c. They said they’d need it for a couple of days but we now know this means a week in ‘Fiji time’, so with the forecast predicting big swells and stronger wind we headed north in company with EV to find shelter in Saweni Bay (anchorage at 17 38.679S; 177 23.524E). We weren’t the only ones with the same idea – over the next few days the bay filled up with cruising boats, waiting out the weather. It’s a lovely protected anchorage so it was an easy place to spend a few days. 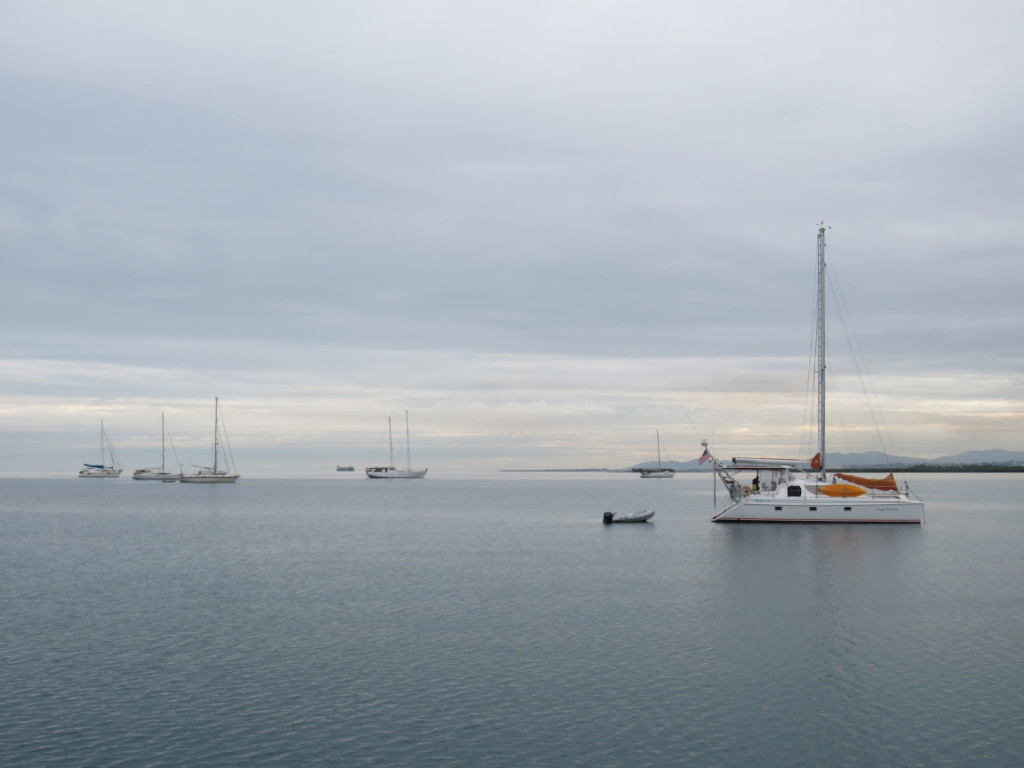 Escape Velocity and other neighbours in calm Saweni Bay 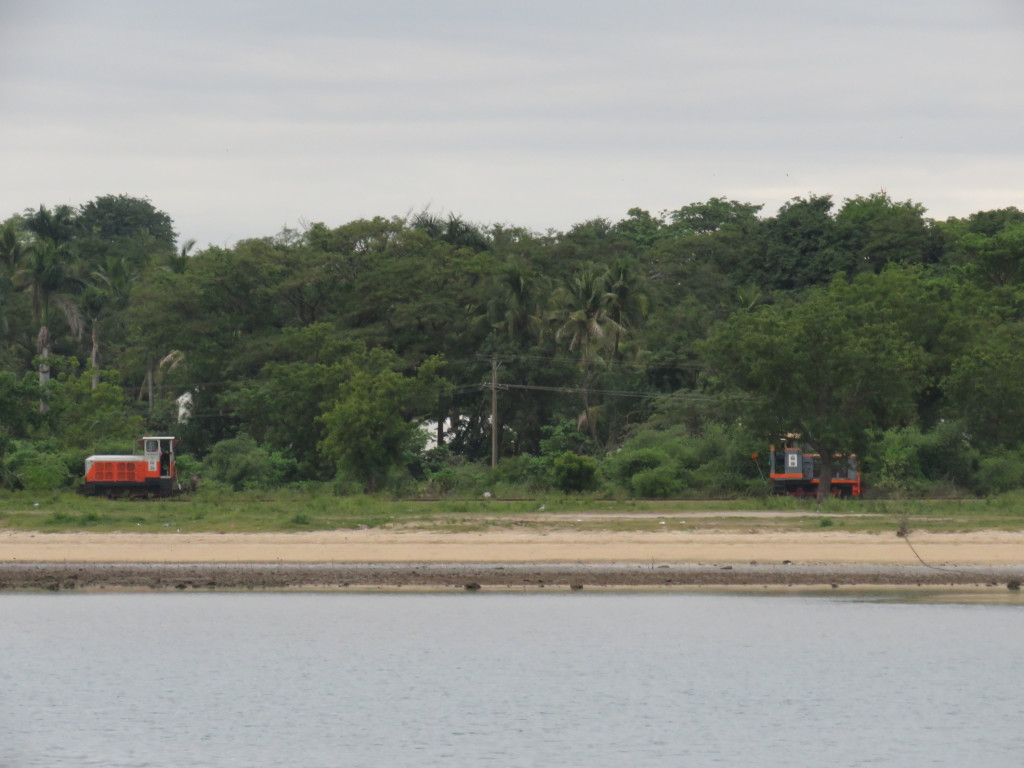 The cane train whistles woke us up most mornings

On Sunday we decided to walk to Vuda Point marina to once again enjoy their live music on the waterfront. It takes about an hour, following the cane train tracks. On the way who should we meet but the infamous Abdul, our taxi-driver, on his way to buy a cow! 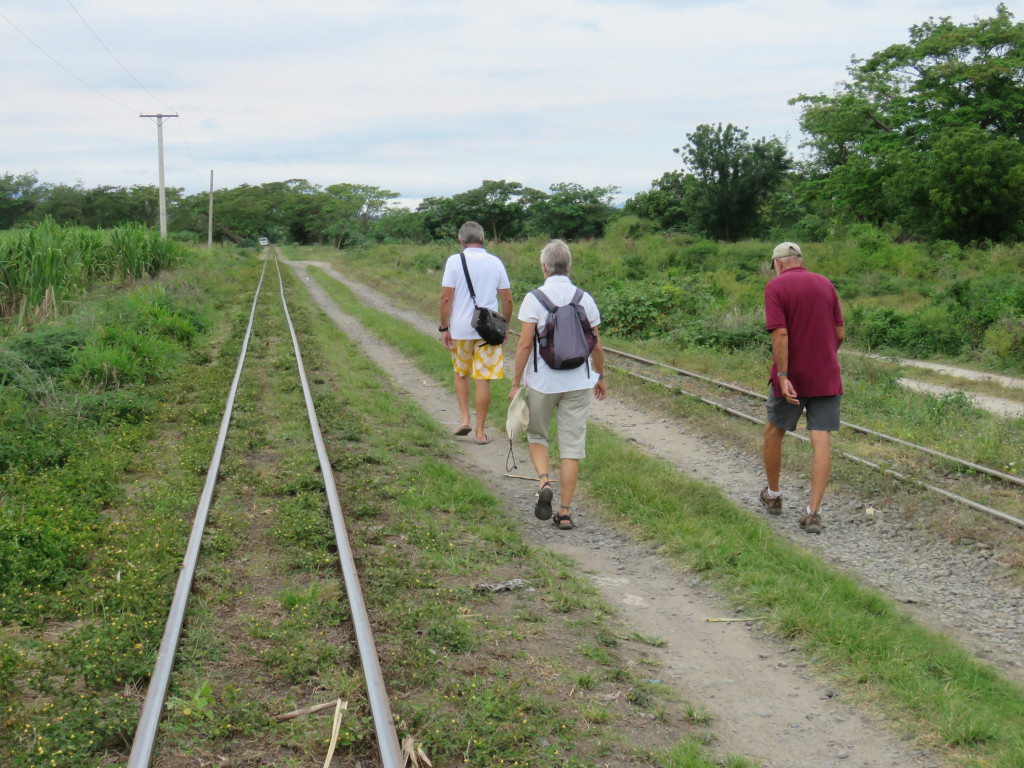 Walking the tracks with Marce and Jack 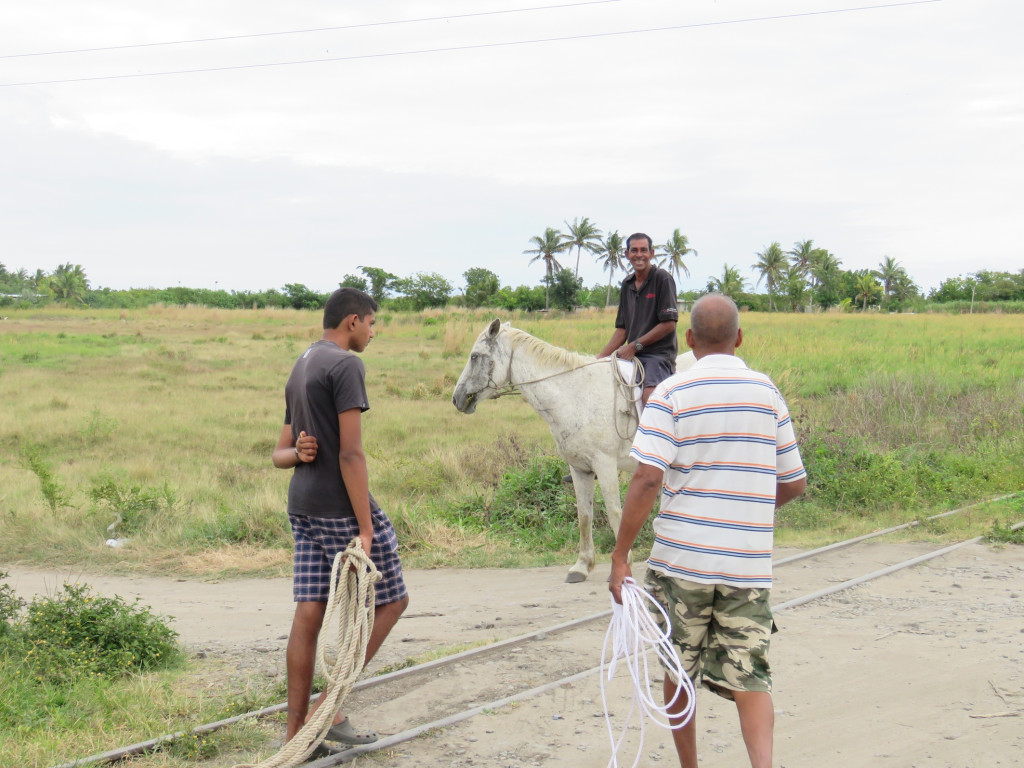 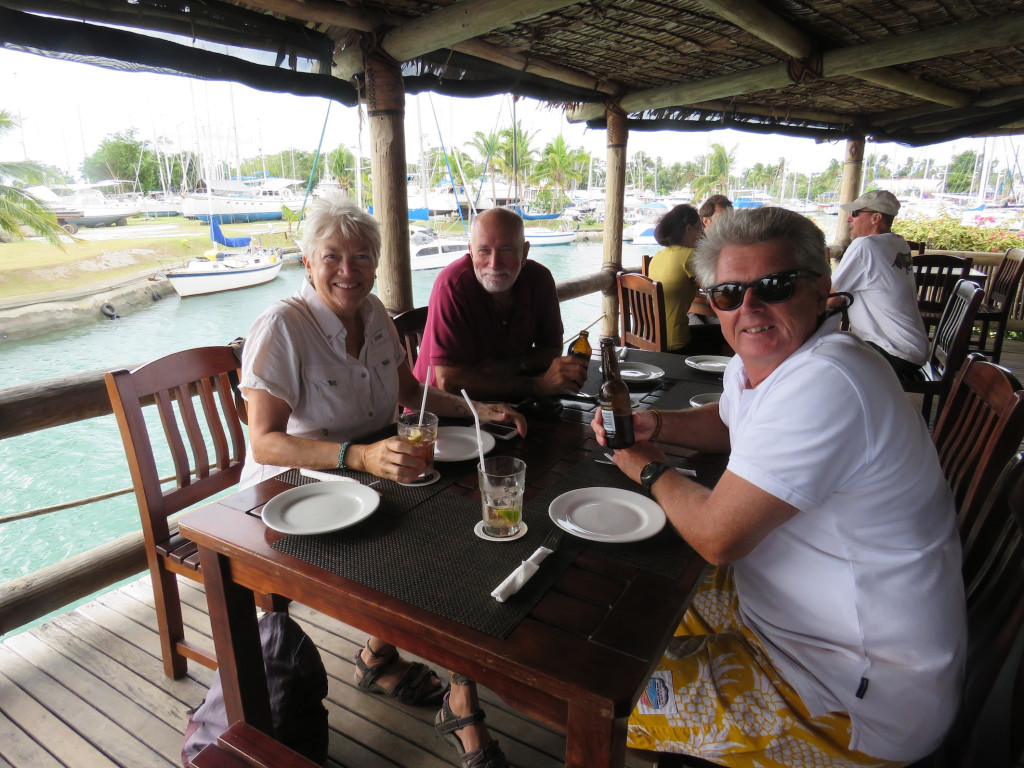 another Sunday, another parting glass with our good friends on Escape Velocity

Abdul insisted on driving us back from the marina later in the afternoon, warning us about local Fijians who would most likely waylay and rob us after dark. Was it true? Who knows? It’s clear that despite a more settled political environment there is still no love lost between the Indians and Fijians. I picked the short straw and got the front seat and it became abundantly clear that the communication problems with Abdul had not improved. He tried to explain to me why he was buying a cow, working on the principle that if he shouted at me I’d eventually understand him, while the other (very badly behaved) passengers in the back stifled their giggles and I tried to keep a straight face. Eventually (I think, and after researching with Mr Google) I gleaned that it was all to do with the Muslim festival of Eid Ul-Adha, where beasts are slaughtered so the meat can be distributed free to the poor, all part of the week-long Haj. What had me confused was that Abdul told me he speaks Hindi, so I assumed he was a Hindu. Fiji is a wonderfully complex, culturally diverse and interesting place!

Back in Denerau we managed to snaffle ourselves a mooring for a few nights, and collected our freezer, not much the wiser about what the problem was. They couldn’t find anything obviously faulty so they cleaned the condenser coils and handed it back, minus FJ$84. The power nazi, who’d been so happy for the last week without the freezer gobbling up all our amps, was now in a funk and threatening to throw it overboard. In a desperate attempt to avoid carnage at sea, I took Marce’s advice and put our fridge thermometer in the bottom of the freezer. Lo and behold, it read -12c even though the electronic readout said -1c, so it’s either a faulty sensor or internal thermometer. Either way, I’m now happy that our food will remain frozen and we won’t die of botulism. The power nazi is grumbling, of course, but I find earplugs are a wonderful invention….

We had provisioning and errands to do, so we took the yellow “dollar” bus into Nadi on several occasions. It’s a great service that runs frequently, mostly for the benefit of the local Fijians who work in Denarau. Bruce invented a couple of new yoga poses while contorting his long legs into the teeny tiny spaces between the seats. I guess there’s a reason it only costs a dollar! 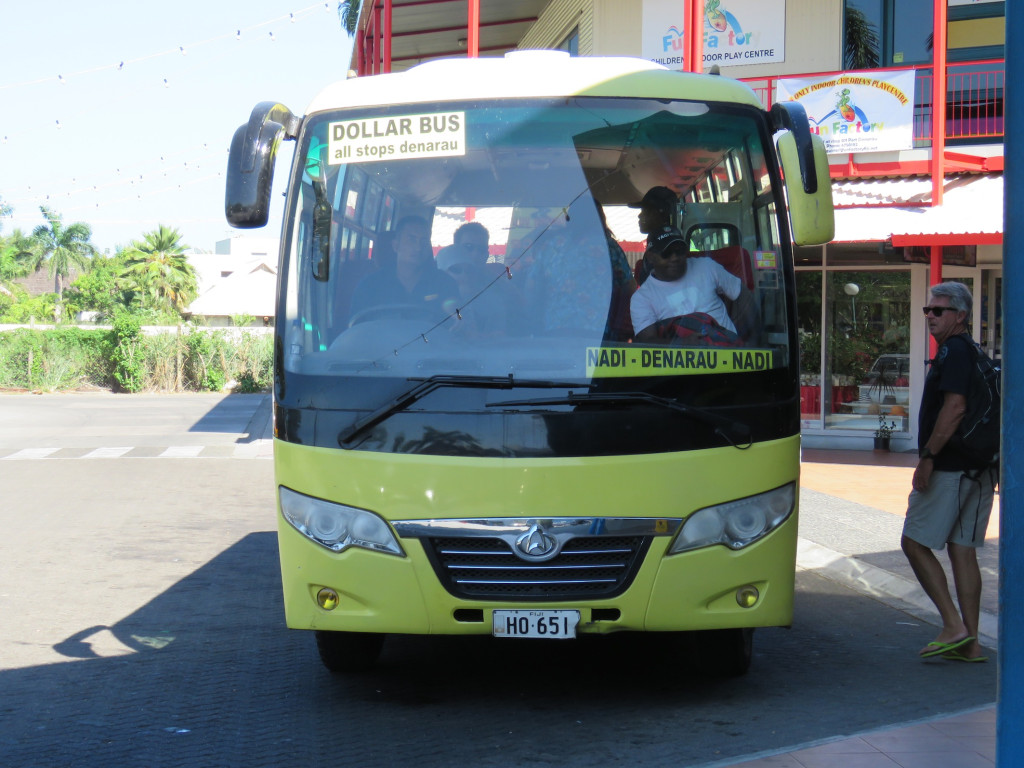 The dollar bus – can’t grumble about the price!

But the seat spacing is a challenge…

Nadi itself is a very Indian town complete with Indian temple, with the exception of the local fruit and vegetable market and the Fijian handicraft shop. Lily, from the handicraft shop was very helpful in showing us where the post office was, but was also keen to steer us away from the (to her mind) inferior Indian-owned shops selling Fijian handicrafts. The bias about ‘the others’ obviously goes both ways here. 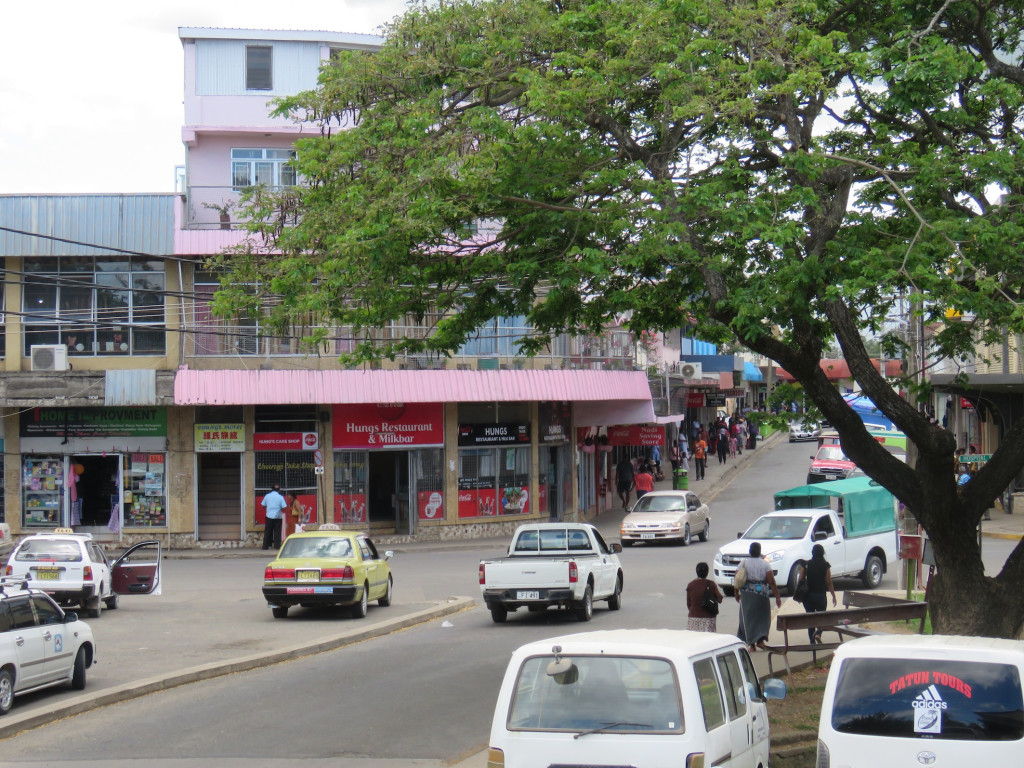 The hustle and bustle of downtown Nadi 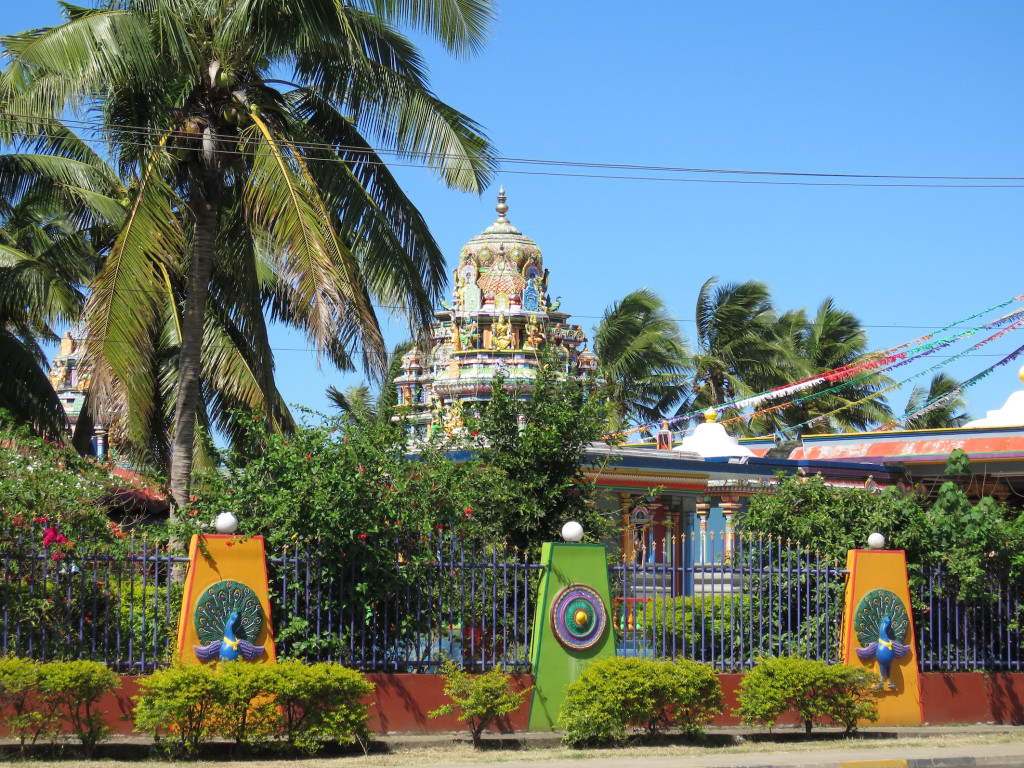 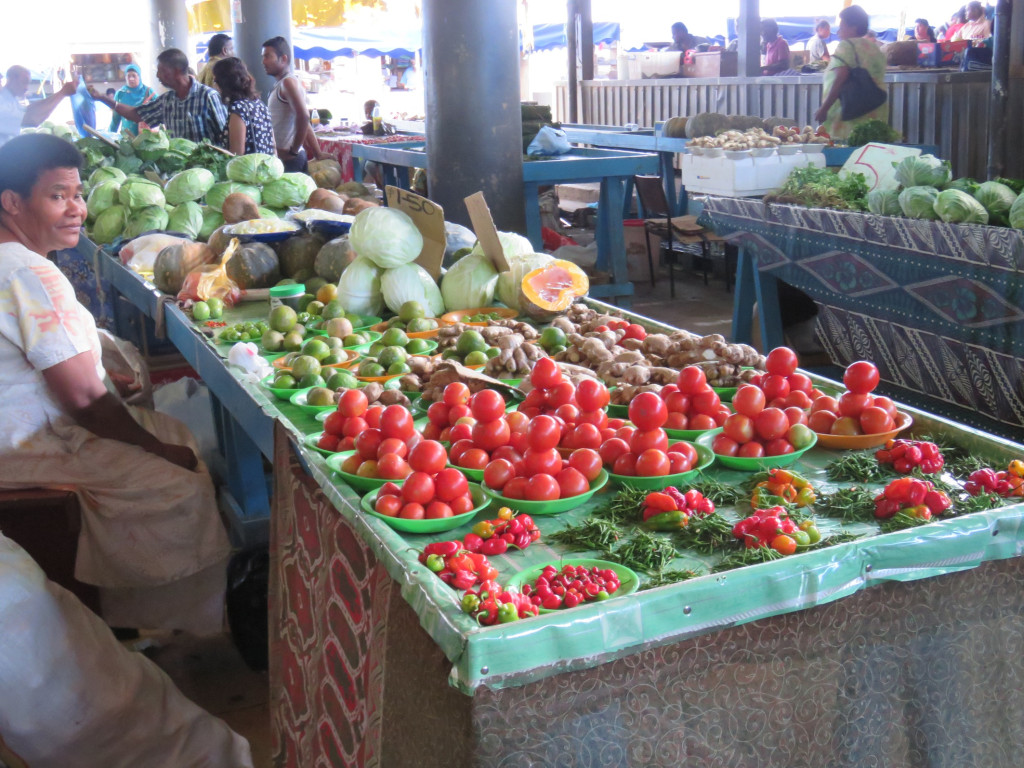 On the way back to Denarau our bus did a detour to the local villages on the outskirts of Denarau. Fijians are some of the happiest, most welcoming people we’ve met on our travels, but the disparity between their lifestyle and the mega-developments just a few kilometers away was frankly shocking. 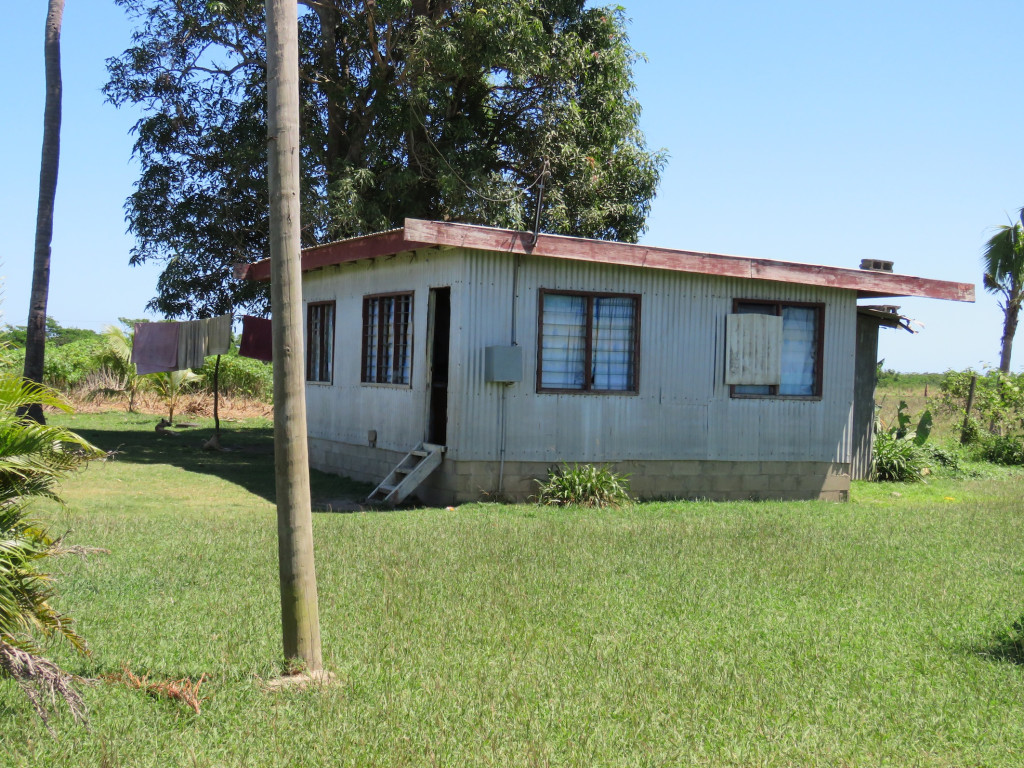 This was one of the better houses in the local village 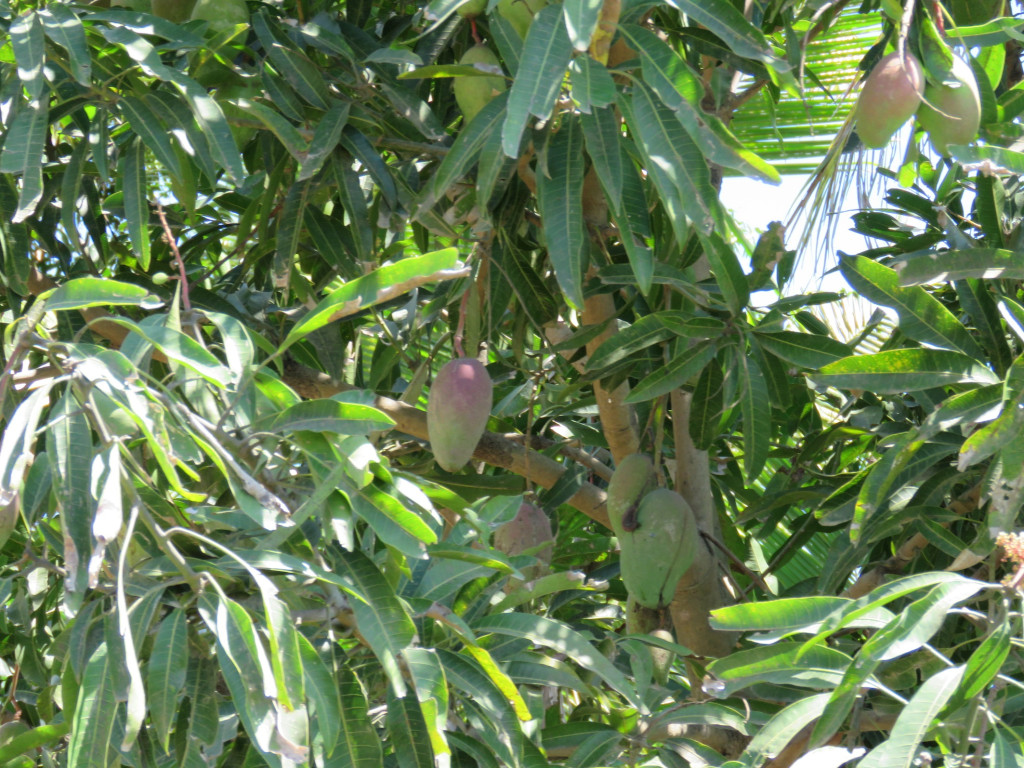 It started me wondering about a topic many of us cruisers wrestle with – is development and tourism in these Pacific nations a good thing overall for the country and the local population? True, tourism provides employment for many Fijians but is it improving the quality of life (whatever that is) for ordinary Fijians? Later I read that Prime Minister Bainimarama has just instigated legislation for free education for primary and secondary school children, so it seems that maybe, just maybe, some of those tourist dollars are being returned to the Fijian people. Let’s hope so. 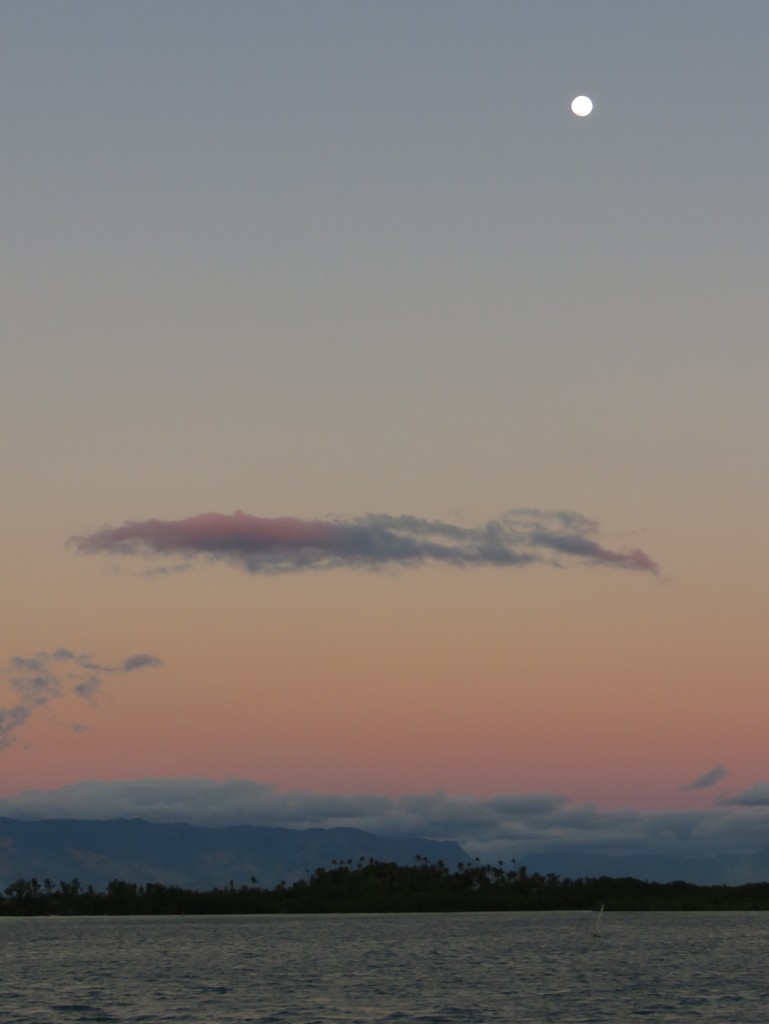 A tranquil end to a day in Denarau

4 Responses to The Others – Denarau, Fiji