It’s hard to imagine a more perfect setting for our first landfall in the Caribbean.

The Bitter End Yacht Club is situated on the eastern side of North Sound on Virgin Gorda, a large protected bay with many separate anchorages and communities. Bitter End facilities include restaurants, the Crawl pub, some small gift shops and store, plus a swimming pool, free for us Dawgs to use. Because it’s early in the season, the place is almost deserted so we’ve enjoyed luxuriating by the pool.

The club also offers free moorings to the Dawgs until mid-December, so it’s a pretty good deal given that most moorings are $30 per night here. After doing some cleaning up of the boat and farewelling our crew, we had a week to enjoy Rob and Alley’s company. 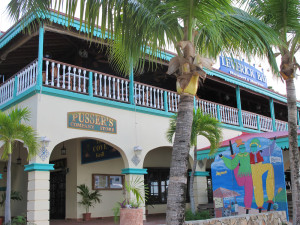 You can tell when it’s happy hour!

Another happy hour at the Crawl Pub

We visited the pretty little resort of Leverick Bay to use their laundromat, had happy hours at Saba Rock Bar and the pub, and then took off for a few days into Sir Francis Drake Channel to explore some other parts of the BVI’s.

The ‘Baths’ on the southwestern end of Virgin Gorda are a big tourist drawcard – a huge conglomeration of granite boulders creating some interesting caves. You’re not allowed to land your dinghy there, so we picked up a mooring a little north outside Spanish Town, and then got a taxi to the Baths. Interesting, but not spectacular and a bit too touristy for our liking.

But Rob and Alley enjoyed the snorkeling and the caves. From there we did a short one hour sail to Cooper Island, another idyllic spot where the snorkeling was much better, and the resort bar was very inviting. 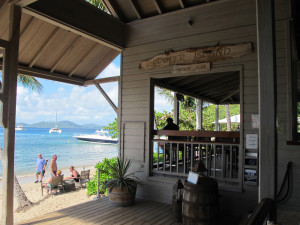 They also had a rum bar on site, which we had to visit of course! Every imaginable brand of rum on offer – the one we sampled, “Sebastian”, was like nectar. Sadly they couldn’t sell us a bottle and the only place to purchase it is at the cellar door in Tortola, so looks like we’re out of luck on that one..damn!

Oh my! so many rums to choose from…

But…we were consoled by another beautiful sunset. 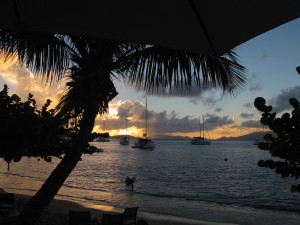 Thursday we reluctantly left Cooper Island and had another short sail over to Trellis Bay, Beef Island, right next to the airport.

The grocery store at Trellis Bay

Gli Gli, the largest Carib Indian dugout canoe in the Caribbean is housed at Trellis Bay

Trellis Bay is an interesting, arty little community. Aragorn’s gallery has some superb metalwork sculptures of marine life, just a little too big and too pricey for Toucan. We were hoping to take Rob and Alley for a farewell dinner (and early birthday celebration) to the Last Resort, a quaint little place on Bellamy Cay that apparently has its’ own resident donkey. Sadly they were closed for renovations, so we had to be content with De Loose Mongoose bar and restaurant on the beach – still pretty good though, as long as you remember to apply copious amounts of Bushman’s to combat the fiercesome mozzies.

Friday morning was a tough one – having to farewell Rob and Alley as they made their way back to Sydney via Puerto Rico, Miami, and LA. At least getting them to the airport was easy – just a dinghy ride into the beach and then a two minute walk to the terminal! A few tears were shed as we said our goodbyes, it’s always so hard knowing it’ll be a while before we can see them again. But so wonderful to have been able to share this first part of our adventure with them. A bit subdued and sad, we made our way back to the boat and then motored around to Lee Bay on Great Camanoe Island. It was a quiet little anchorage shared with only one other boat, but not particularly pretty and the water was quite murky, so we stayed on board and had a quiet afternoon. There are many more parts of the BVI’s that we won’t have time to explore unfortunately – there’s so much to see that many cruisers spend the whole season here! Tomorrow we’ll head back to the Bitter End for a few days, before finding a weather window that will allow us to get south to St Martin where we hope to be able to pick up some of our much-needed boat parts.