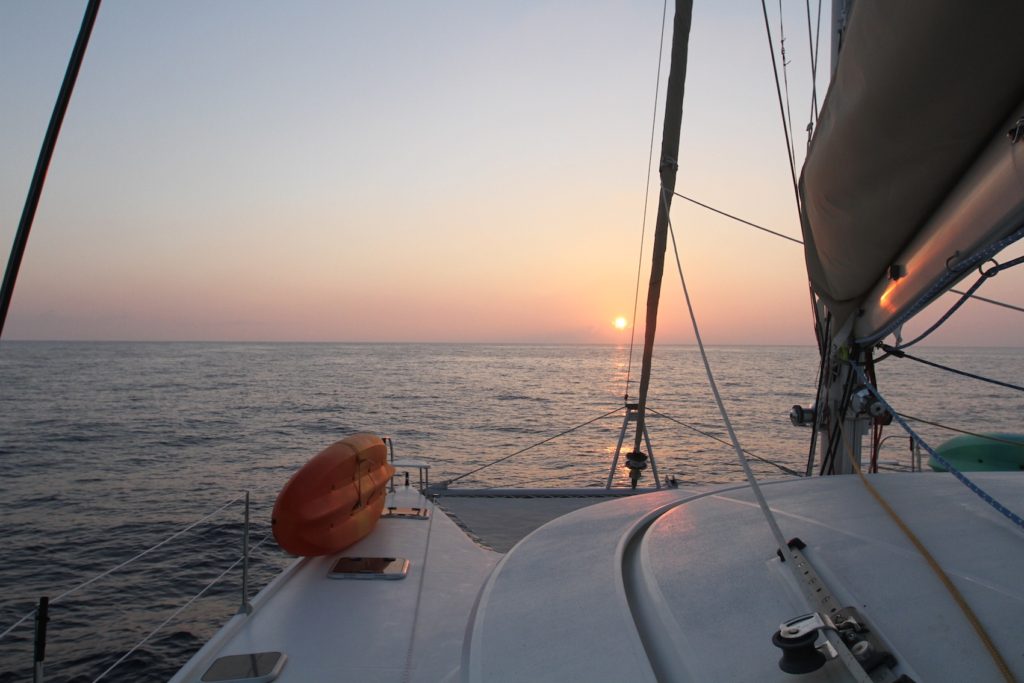 What a mixed bag of sailing conditions we’ve had on this last leg home, which is probably apt given the mixed emotions we’re feeling. On the one hand we’re so looking forward to seeing our family and friends again, but on the other hand the thought of having to adjust to the ‘rat race’ fills us with dread, and there’s also a deep sense of loss at having to forego our freedom and travels and part ways with our cruising companions. So this is our challenge, to reconcile all these conflicting emotions and embrace the changes to come, all the while safely sailing the mighty Toucan to her new home port in Pittwater.

We left Huon Reef on 14th November, aiming to get south as quickly as possible to avoid the tropical low forming to our north. On the way out of the reef we snagged ourselves a decent size tuna, the first fish we’ve successfully caught in ages. So after all the cleaning and filleting was done we had several freezer meals ready to go, and enjoyed some fresh sashimi for lunch. Yum! Sadly, the wind wasn’t co-operating at all with our plan, and we achieved the dubious honour of recording our slowest 24 hour run since we started this adventure – 104NM. Normally we can achieve a daily average of 160-170NM so this was pretty woeful. Partly it’s due to a problem we have with our starboard saildrive – even though we changed the lip seal in Fiji, it’s still leaking oil so we’re trying to minimize the amount of time we use the engine and when we do, we can’t run it over 1800rpm.

Despite the light wind, we enjoyed a fabulous sunset on our first evening and that night we got to experience the most glorious full moon – the November “supermoon” bathing us in its silvery glow as we glided through the water. There really is nothing quite so beautiful as being at sea on a night like this, and we relished every moment of it with a little bit of a lump in our throats, knowing it would be a while before we get to experience another special night like this. 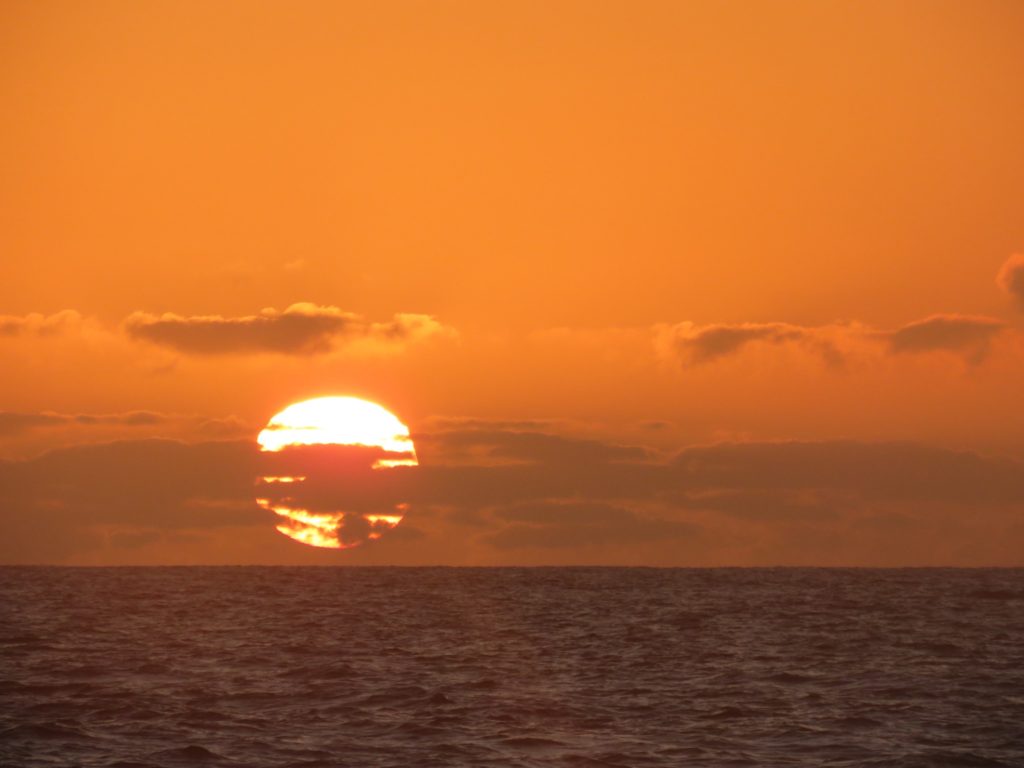 Sunsets at sea are always stunning

The following day the wind increased enough for us to turn the motors off and SAIL – hurrah! We had a great day of beam-reaching, our favourite point of sail but it wasn’t to last – on our second night at sea the trough passed over us, bringing lots of rain squalls but the wind was now on the nose and light. 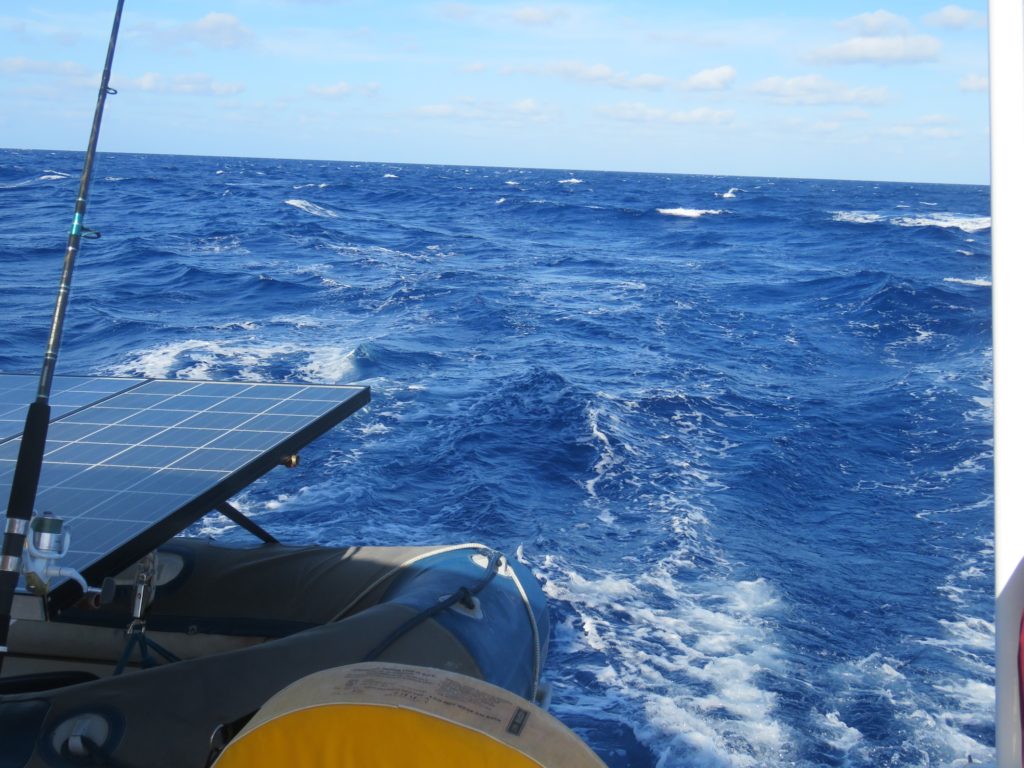 fast beam reaching, such a joy! 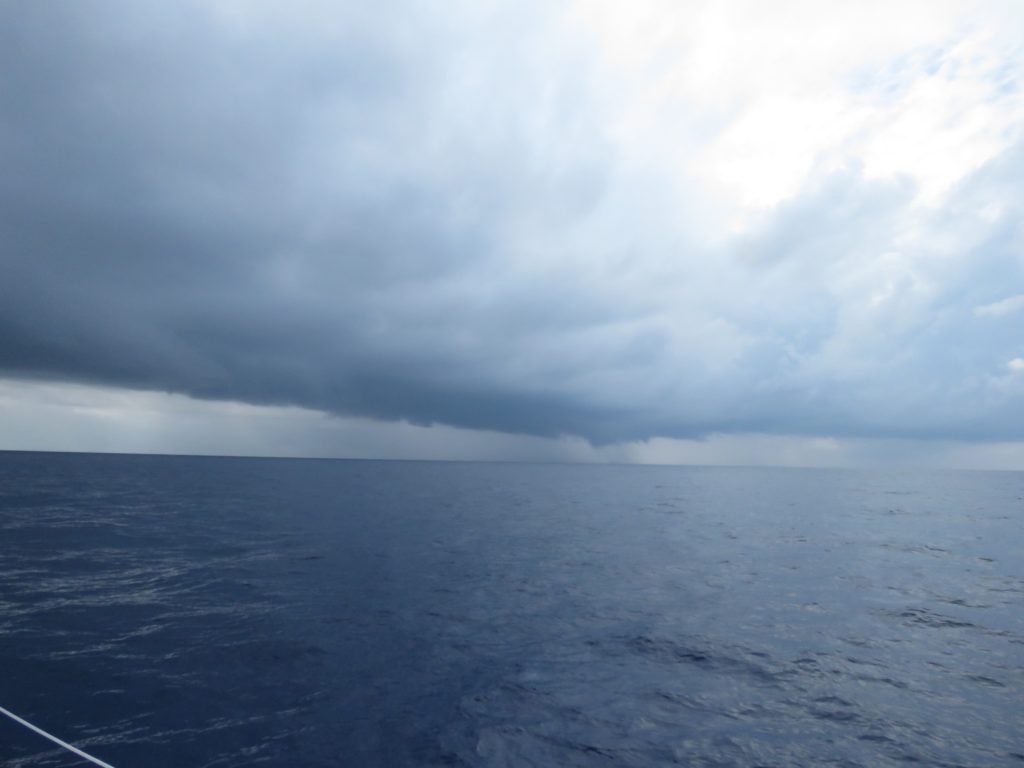 Uh oh, here comes the trough, and the rain

Day three saw an increase in wind from the SE, so with a reef in the main and jib we were rocketing along at 8-9 kts. Unfortunately the swell was coming out of the SW, exactly where we were headed, making for an uncomfortable hobby-horse motion. The wind continued to build and we tucked in a second reef – we were now getting gusts to 35kts and confused seas. Every now and again a wave would slam us from an unexpected direction, breaking over the top of the cabin. Given the deteriorating weather, we abandoned our plans to stop at Chesterfield Reef, or Cato Reef. The aim was to get south as quickly as we could. But it was proving tricky – the wind continued to clock into the south and we were now beating into it, not something cats tend to do well. Having said that, we’ve been pleasantly surprised at how well Toucan can sail to windward, providing we have 20kts or more of wind. But it’s not comfortable and by day 4 we were both starting to feel quite fatigued by the relentless crashing and banging.

If you’ve ever wondered how easy it would be to sneak into Australian waters undetected, let me assure you the ‘eyes in the sky’ are watching. Almost as soon as we entered Australian territorial waters (200NM offshore) we were buzzed by the Australian Border Force plane, wanting to know who we were, where we were headed, where we’d been. All very politely of course. I was sleeping off-watch at the time, but Bruce had a good chat to them and explained that we were now pretty tired in the difficult conditions and asked if we would be permitted to make a safety stop at Fraser Island prior to continuing on down the coast to clear in at Newcastle. The officer said it would be fine, provided we didn’t go ashore or have anyone board our boat. So with a sense of relief we made our way towards Breaksea Spit, to the north of Fraser Island and then worked our way down to the nearest safe anchorage. What a relief to be stationery! We collapsed into bed and it was only the next morning when I fired up the SSB to get our emails that we discovered an email from Bundaberg Customs telling us that under no circumstances were we allowed to stop, that we risked prosecution if we did stop, and that we needed to check in at Bundaberg or keep going. So we sent them a polite email back explaining the conflicting advice we’d been given and letting them know that we were on our way to Newcastle. Sheesh – welcome home!

It took another three days of working our way down the coast with the wind up our bum, dodging the constant stream of commercial shipping before we finally picked up the quarantine ball in Newcastle Harbour on 22nd November, 8.5 days and 1290NM since Huon Reef. It’s all a bit of blur now, those last days down the coast, but I do remember feeling distinctly puzzled to see the sun setting on our starboard side – for the last two years as we’ve travelled west across the Pacific, the sunsets have always been in front of us! Strange what we get accustomed to. 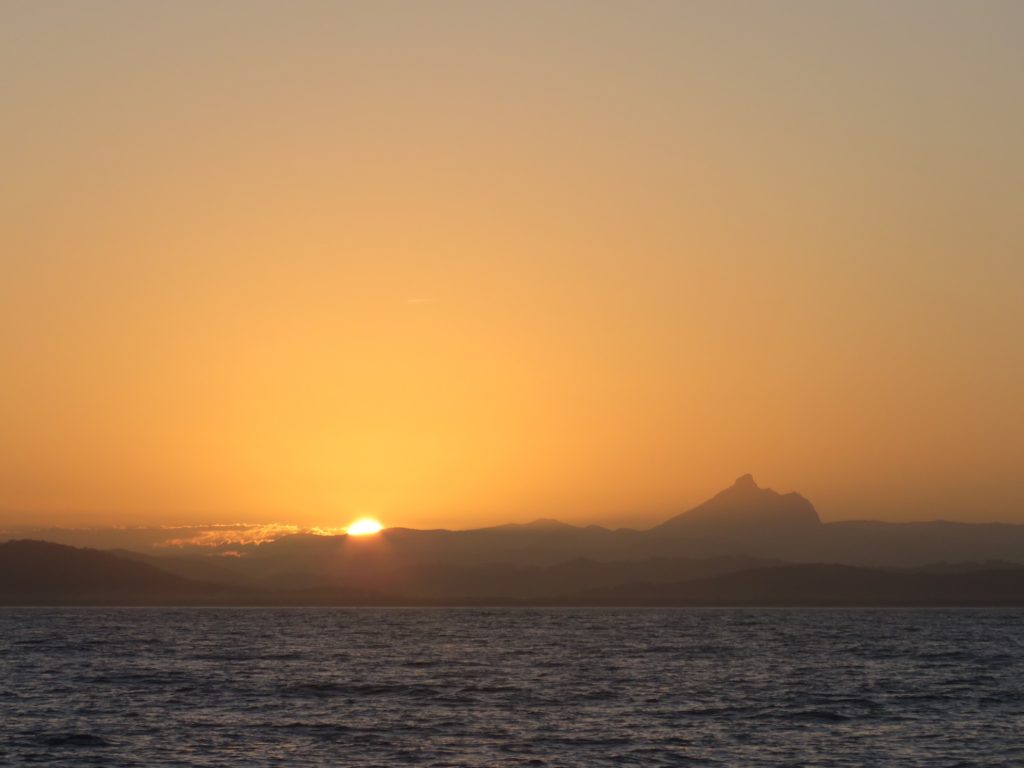 A strange experience, seeing the sun setting to starboard, off the Queesnsland coast 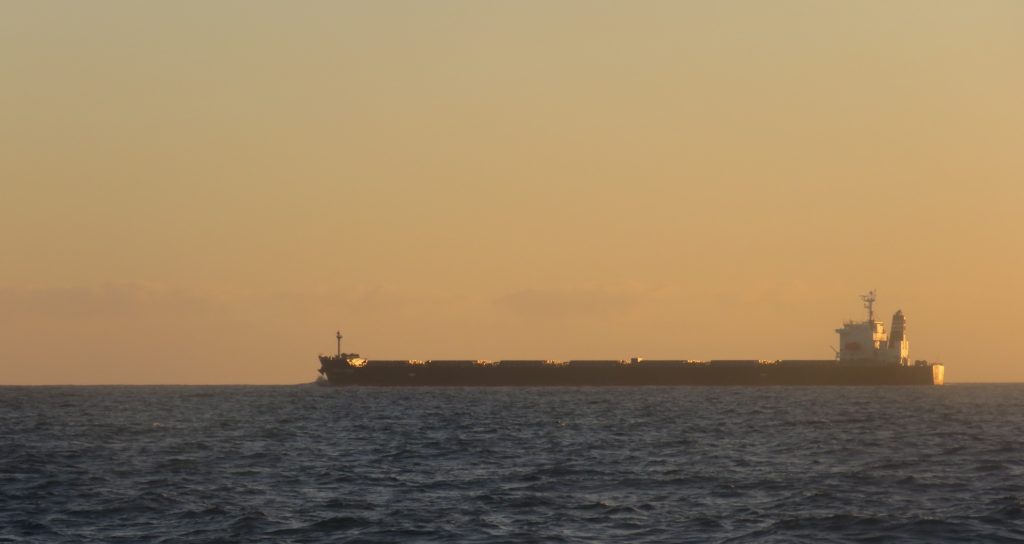 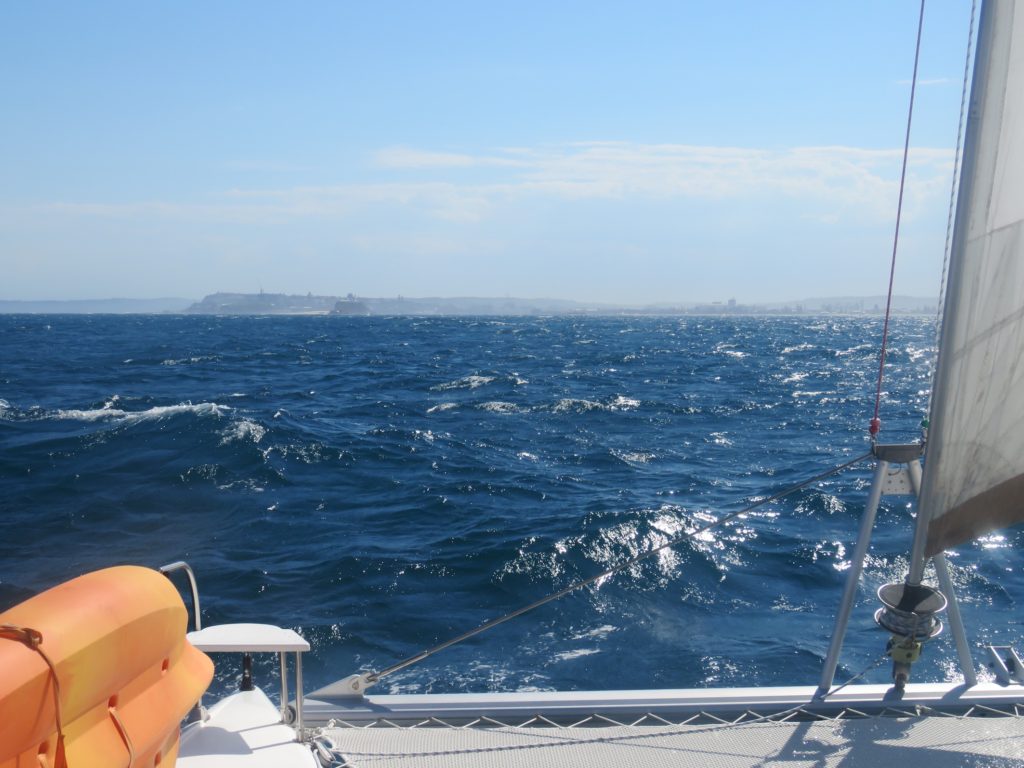 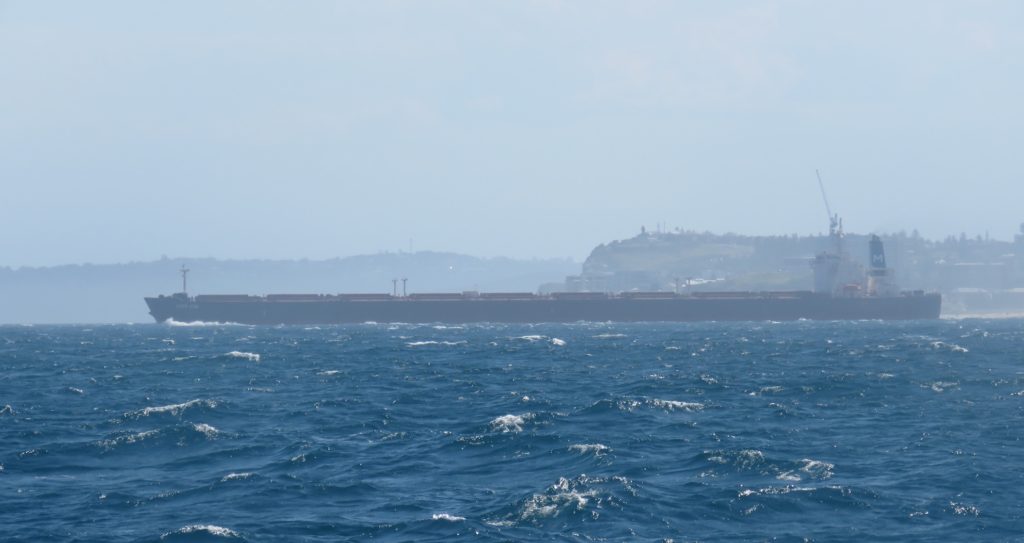 Just have to avoid this big boy coming out of the harbour!

So here we are, back home in the Great Southern Land after two and a half years and 19,000NM across half the world. What an adventure we’ve had! Hopefully the clearing-in process will be straightforward and we’ll be allowed to make our way down to our home port in Pittwater to finalise the importation process and see our family and friends – can’t wait! 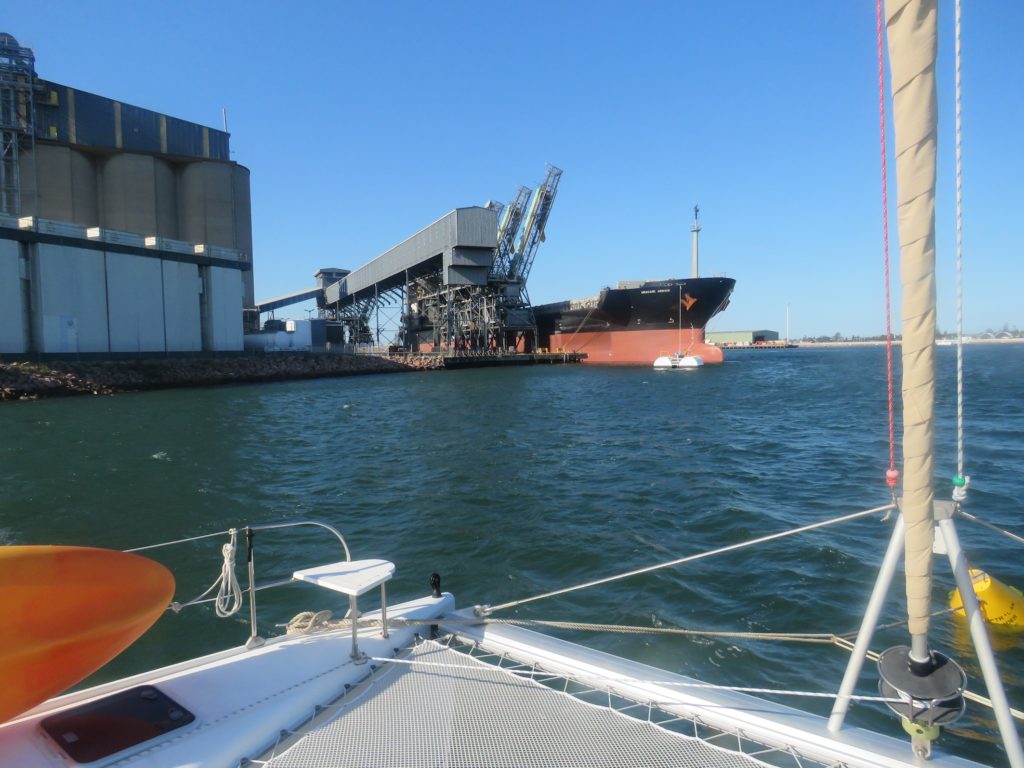 Tied up to the quarantine ball, Newcastle Harbour