It was a bitter-sweet experience arriving in Hiva Oa – sweet because we could officially check in and reprovision, bitter because it was here we had to say our goodbyes to The Butler- aka The Pirate, aka Sherm, aka Geoff Sherman our good buddy and shipmate since early January when he and Mia joined us in St Vincent. As the longest standing member of Team Toucan (what stamina!), we thought it only fitting to put up a little pictorial tribute of his adventures with us…

Arrival in Fatu Hiva after 300NM across the puddle 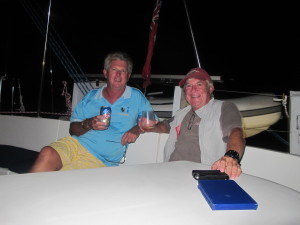 Crossing the equator – the pollywogs have become shellbacks

The pirate and his pony

steering Toucan through the Panama Canal 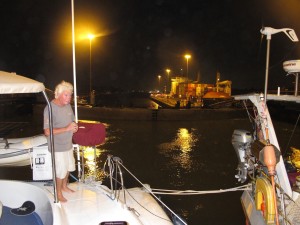 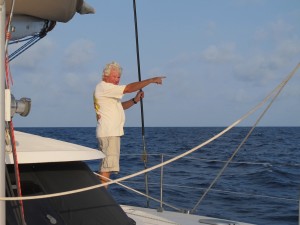 Land Ho! On passage to the San Blas islands 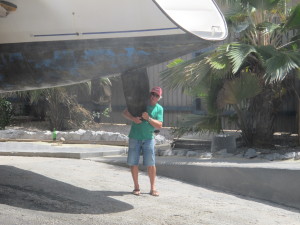 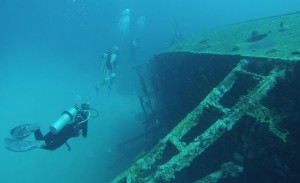 Geoff & Di on the wreck of the Hilma Hooker, Bonaire

Why ‘The Butler” you ask? It’s an anecdote from Geoff’s racing days – not only is he a great sailor, but he was a dab hand as a providore and cook on many an offshore race, including the Sydney-Hobart. We weren’t there to witness it, but apparently a particular crew member made one too many requests of Geoff, and the retort was “ I’m not your F#*##ing Butler”. And of course the name has stuck ever since…! Ah, we’ll miss you Me Hearty, it’s been wonderful to have your help and assistance and thank you for sharing this part of the journey with us. 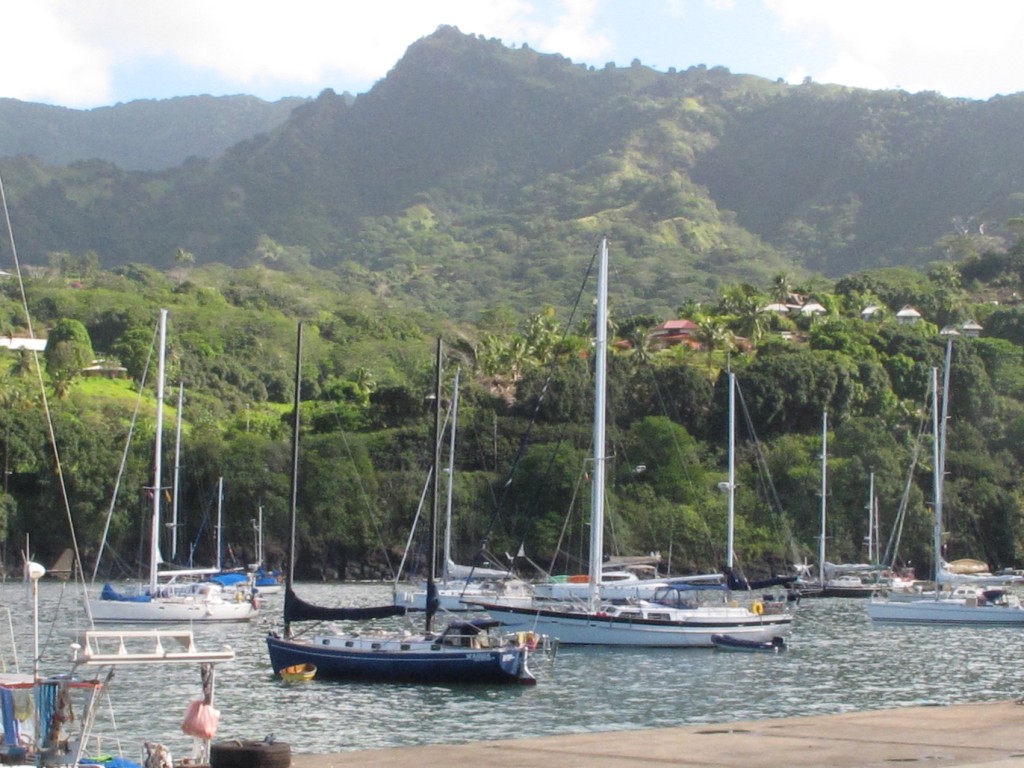 the crowded anchorage in Atuana, Hiva Oa. Toucan is there at the back somewhere

Hiva Oa is not an easy anchorage – there’s very limited room behind the breakwater so you have to use a stern anchor, and the dinghy dock is a nightmare, a concrete platform designed to reduce dinghies to a pulp in the swell if you don’t use a stern anchor there as well. We tried it once, and then decided it was easier to share one dinghy with Rehua and pull it up on the slipway round the corner. But at least the checking in with the Gendarmerie was pleasant (and free!). 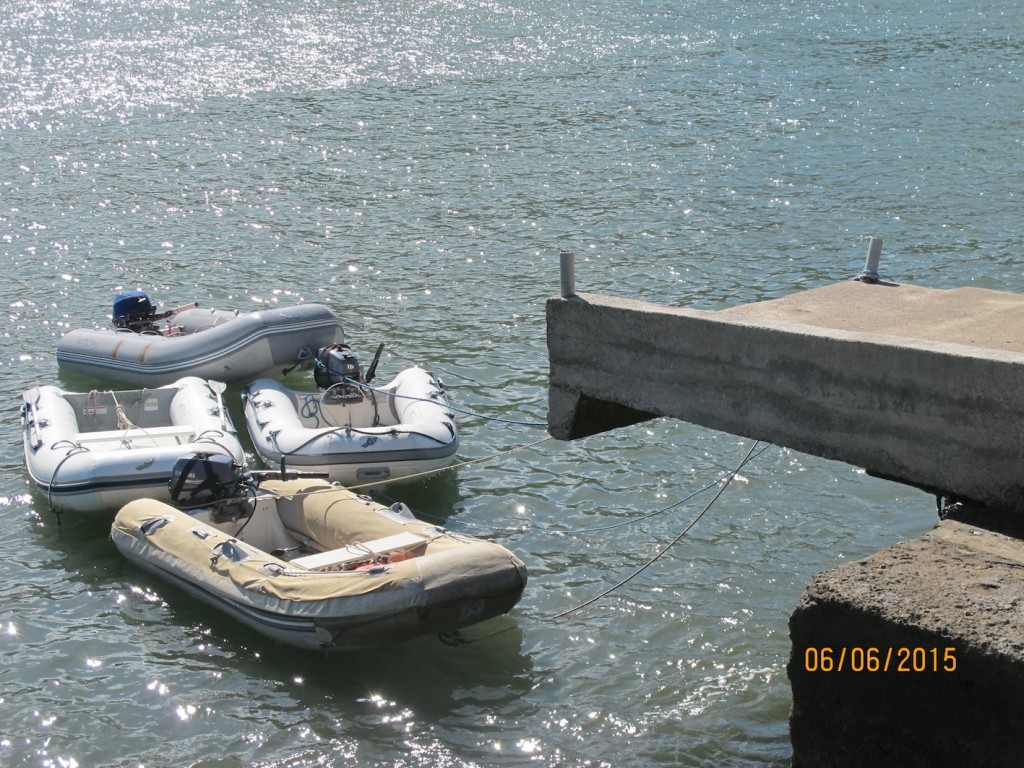 The anchorage is quite a way from the township, so you either walk or hopefully get a lift – most locals are happy to pick you up if they have room.

We did all the usual chores here – laundry, provisioning (but no propane fills as there’s a strike on in Papeete and all the islands are waiting for propane and gasoline). The cost of food and alcohol here left us gob-smacked, it’s by far the most expensive place we’ve visited, but what a delight to find baguettes and French cheeses!

We also did a tour of the island with Geoff and our buddy boat Rehua. Our transport left a lot to be desired, with very little in the way of suspension to cushion the bumpy ride over the rough roads, but we got some fabulous views and visited the remarkable archaeological site at Lipona. 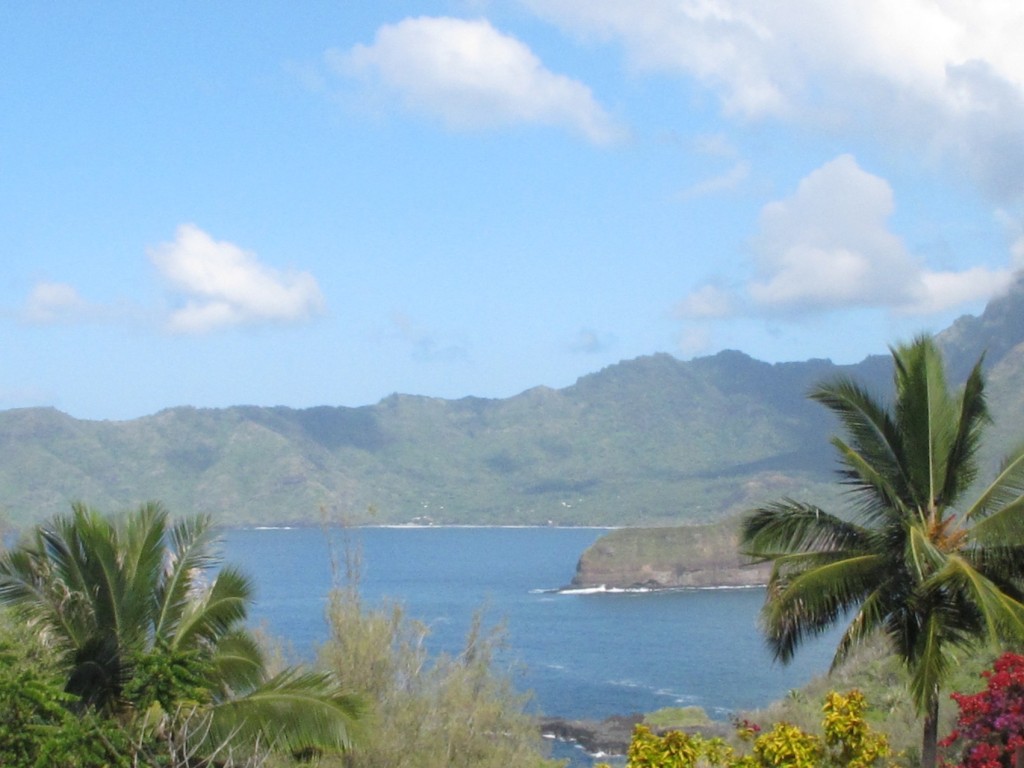 The view over Atuona Bay 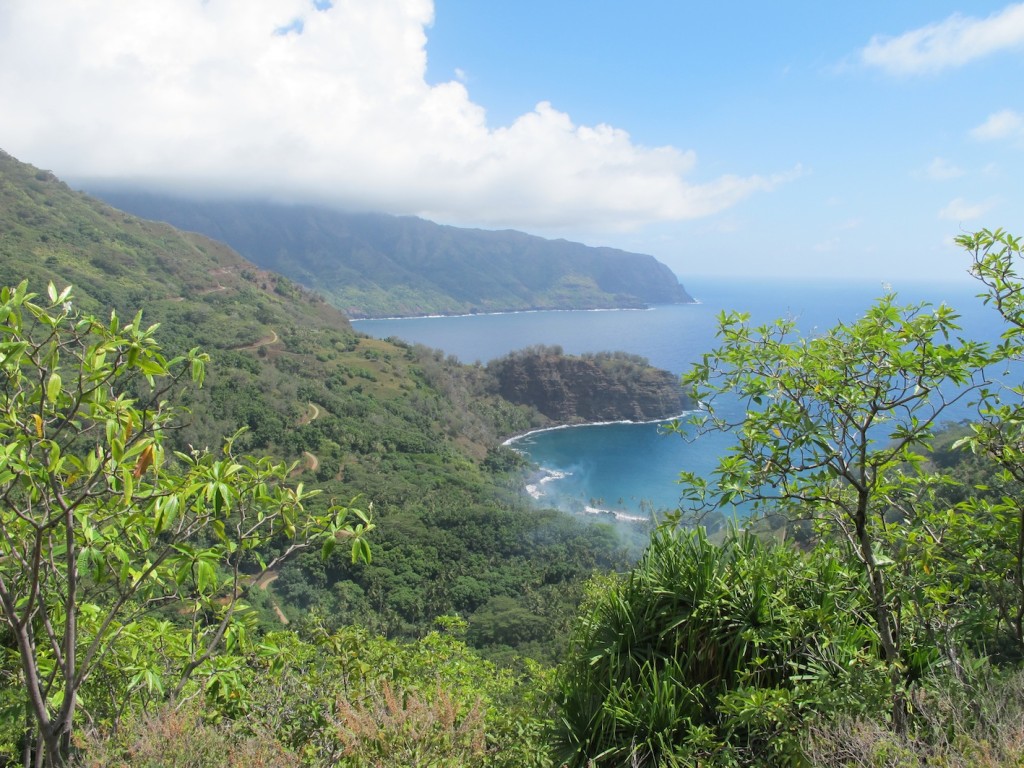 the north side of Hiva Oa 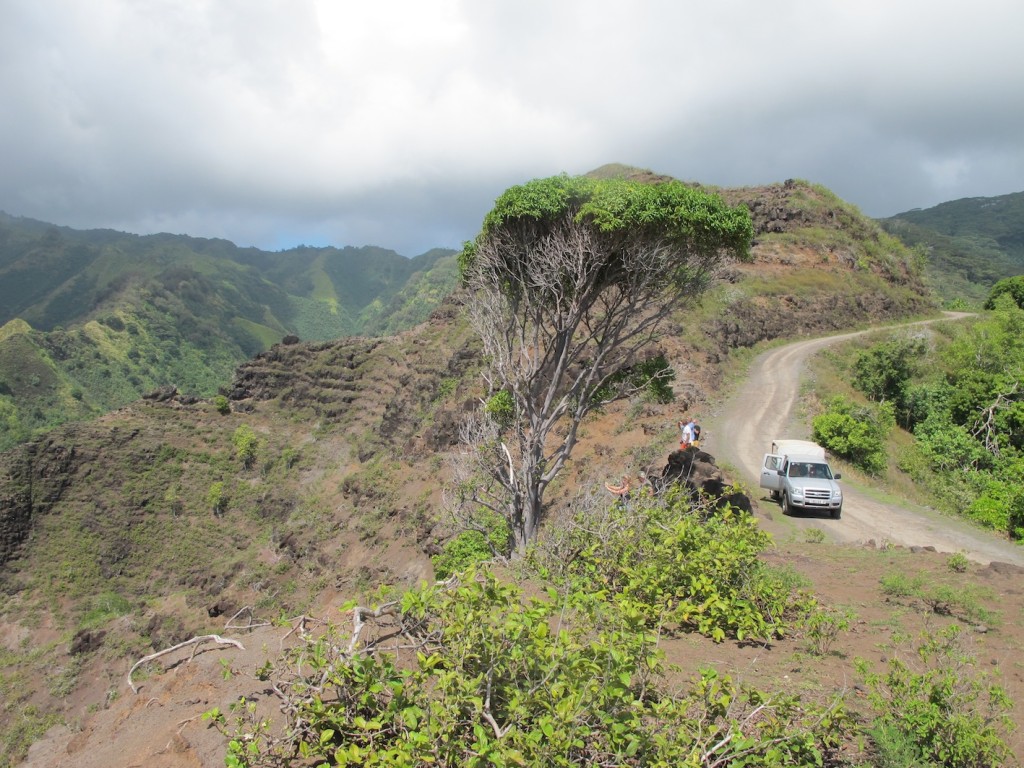 It was a rough ride! 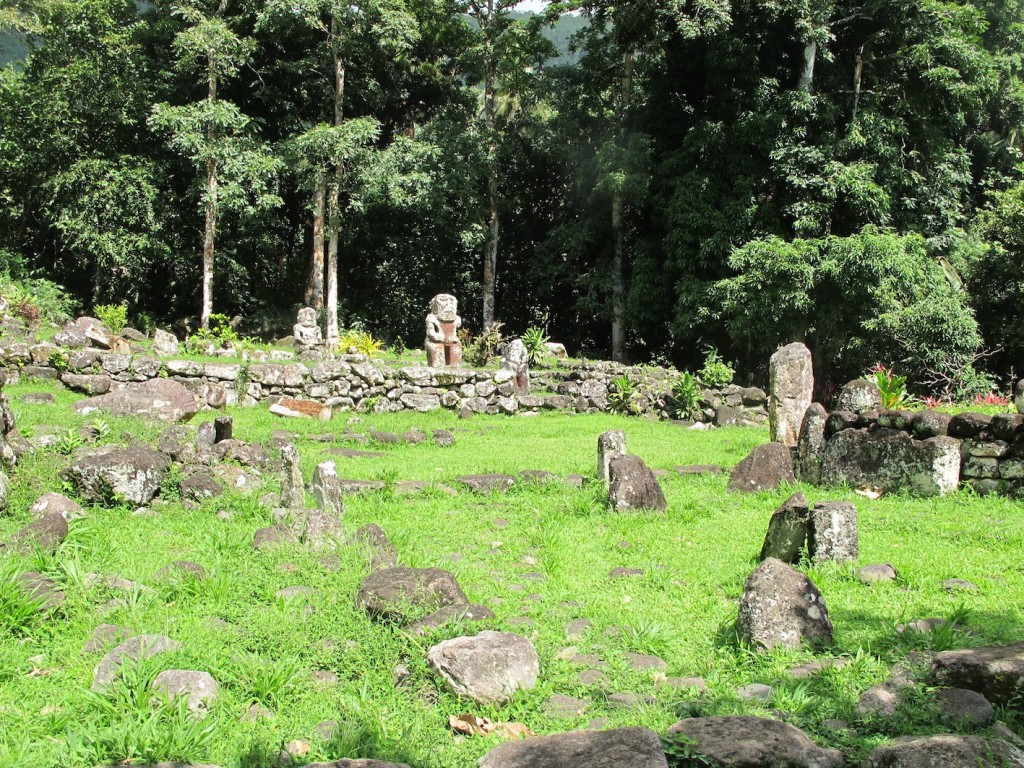 The original inhabitants of these islands are believed to have come from Samoa and Hawaii in the first century AD. Me’ae are the traditional Polynesian sacred sites for religious ceremonies, containing the remains of chiefs or priests and decorated with Tiki (wood or stone images representing powerful protective ancestral figures). They were also the sites for human sacrifices and rites of passage such as tattooing. 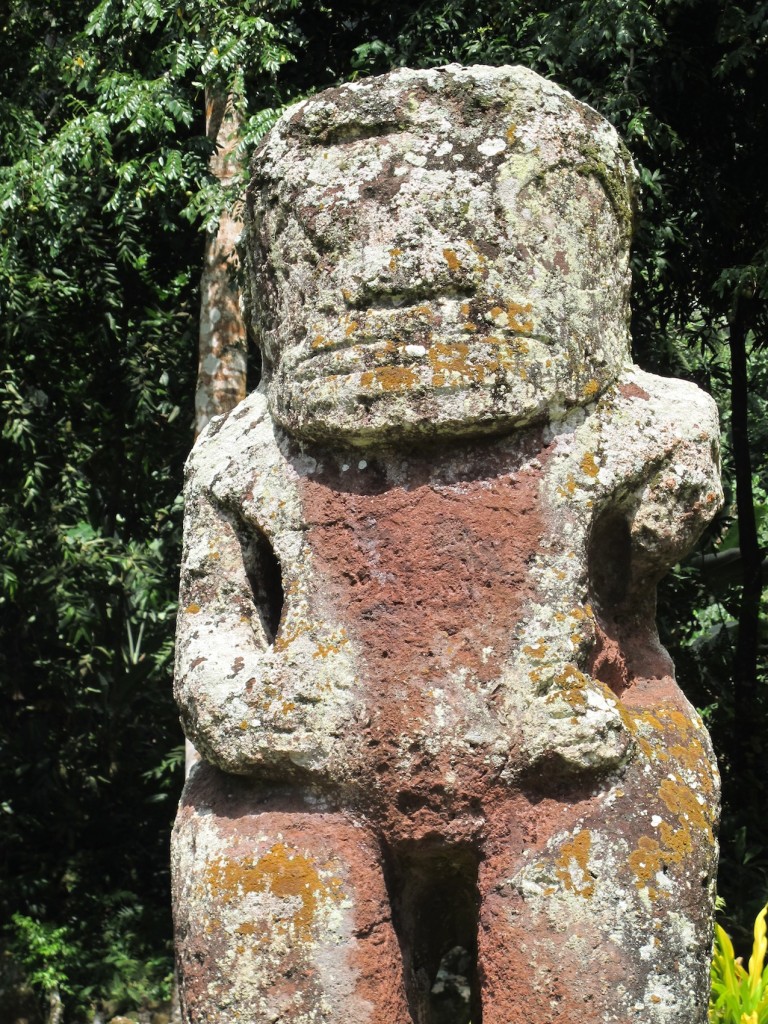 Tiki of the ancestral chief, Liponi 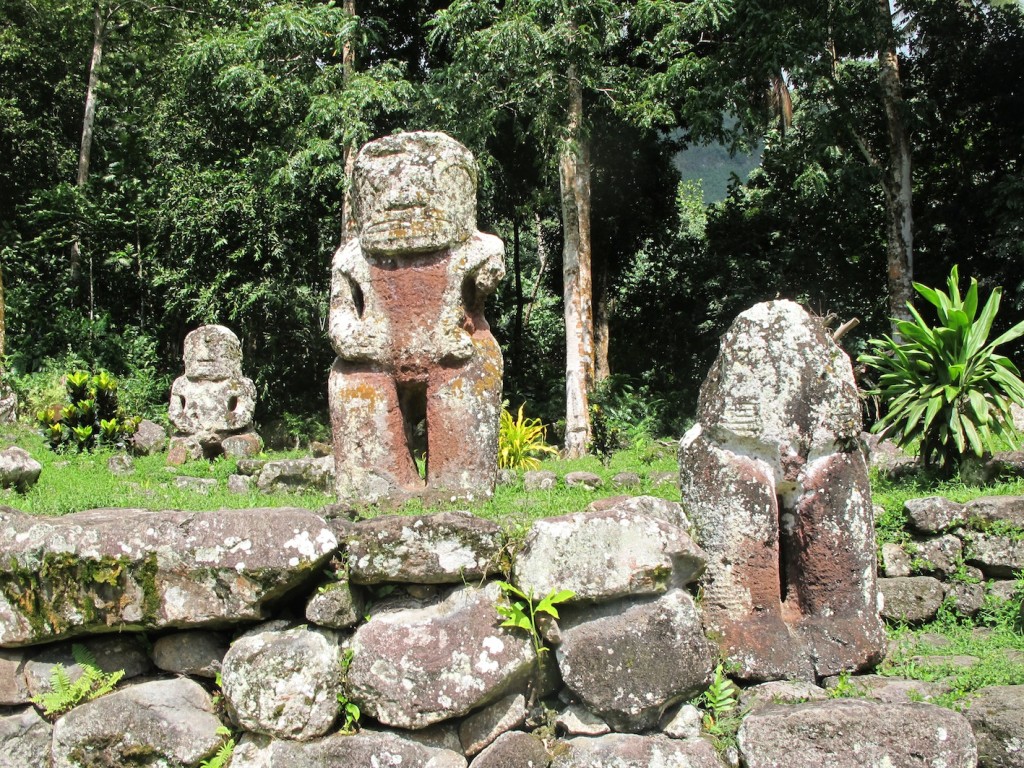 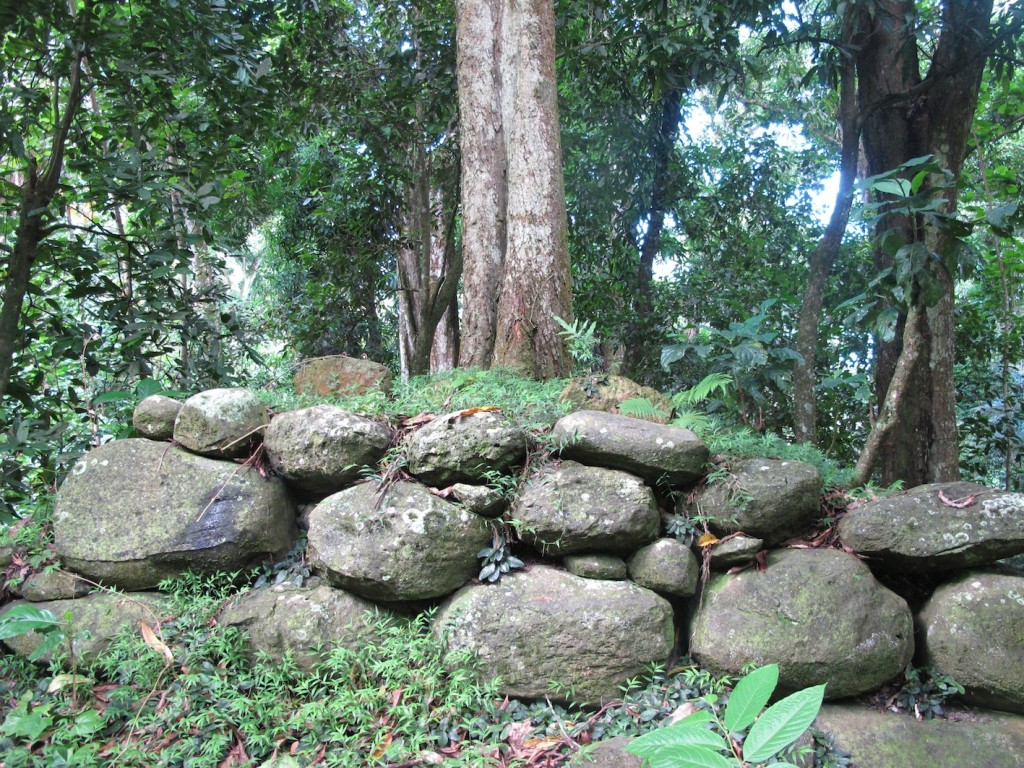 These stone platforms were used for laying out the dead, who were often embalmed with coconut oil. 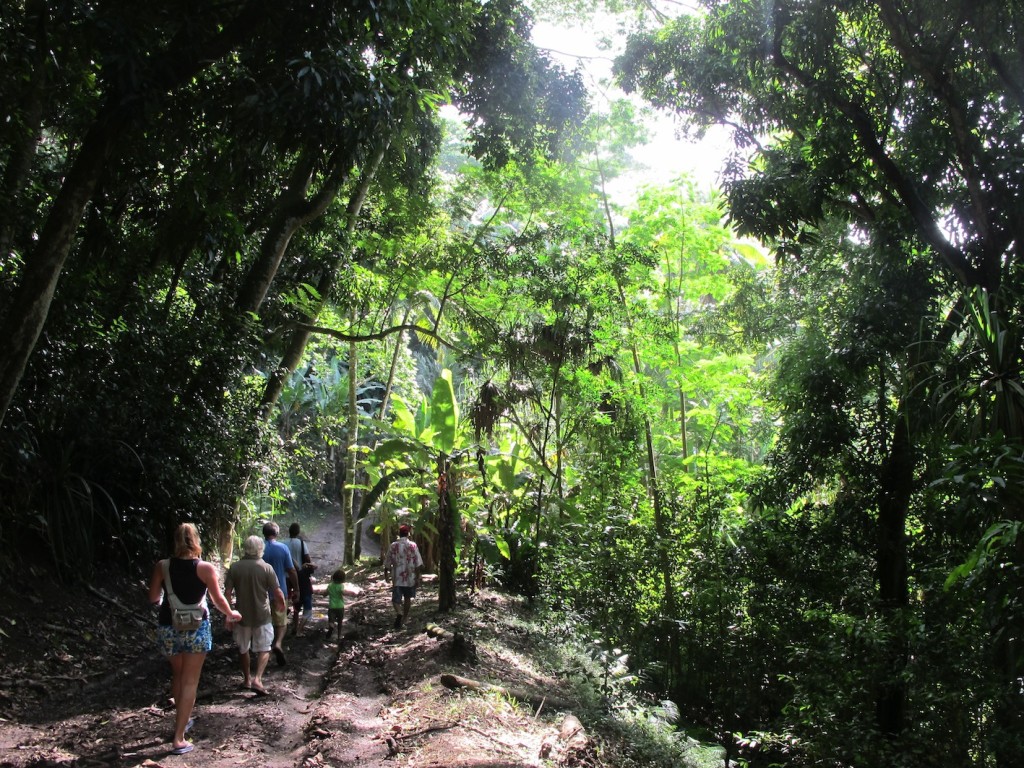 On the way to find the Tiki 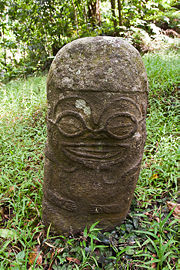 The ‘Smiling Tiki’ is supposedly the patron saint of fishermen. 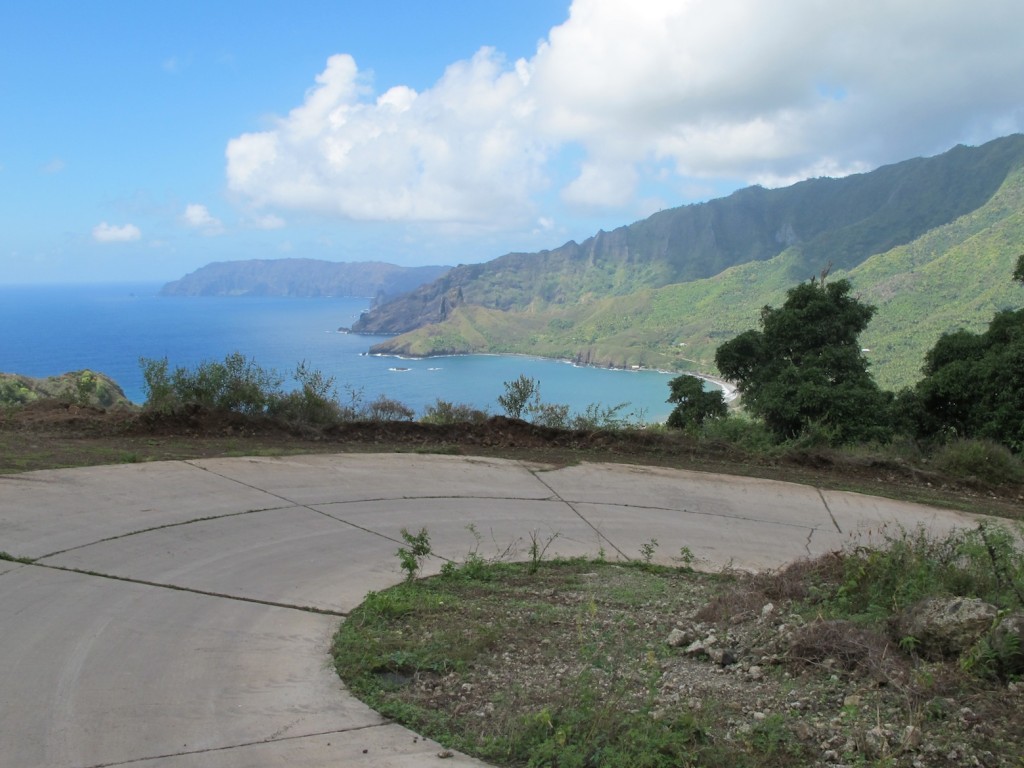 the hairpin bends were a bit hair-raising

Atuona is also the burial place of Jacques Brel, the famous Belgian crooner and Paul Gauguin, the post-impressionist artist famous for his paintings of voluptuous Polynesian women. It’s not a bad final resting spot. 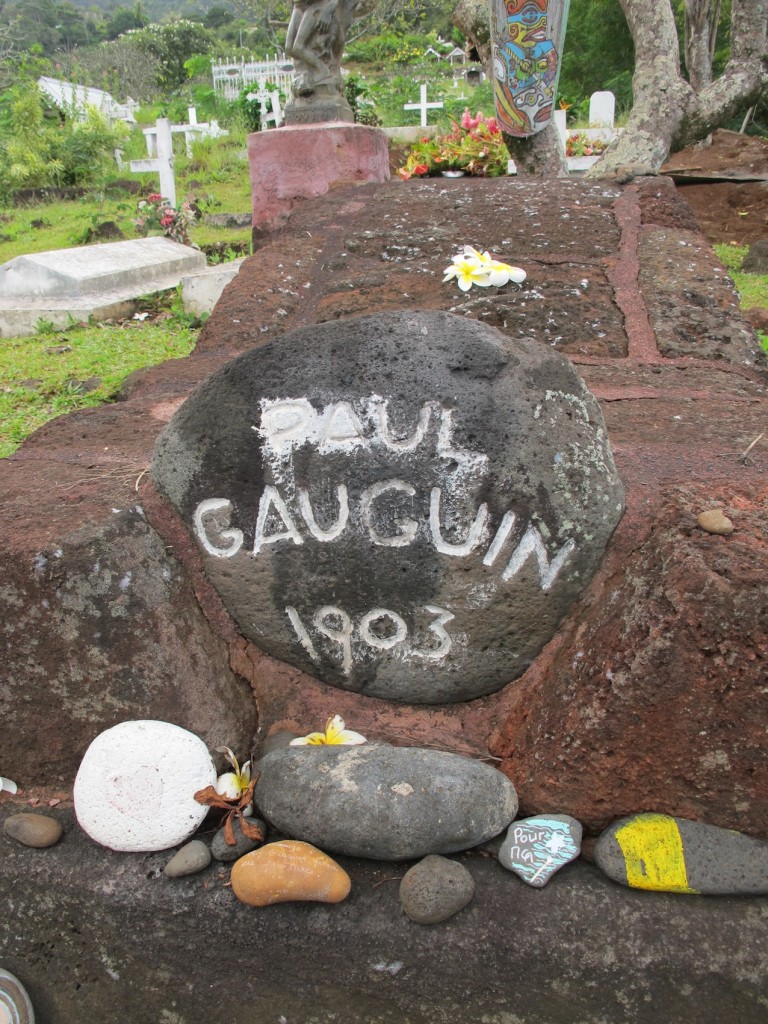 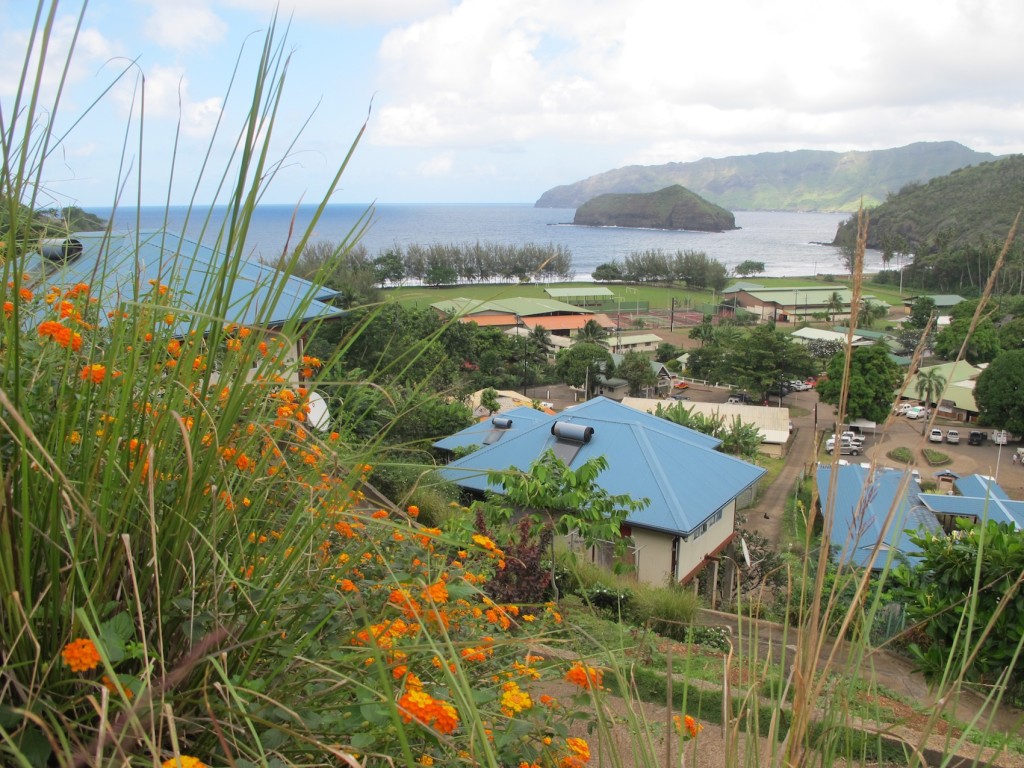 the view from the cemetery overlooking Atuona

We’d heard you could get a very nice meal at the Pearl Lodge up on the hillside, so we went on Sunday evening. The views and the pool were beautiful (and much enjoyed by the kids from Rehua) but the meal was very disappointing. It seems Sunday night is the regular chef’’s night off, same old story, we should have been here yesterday! 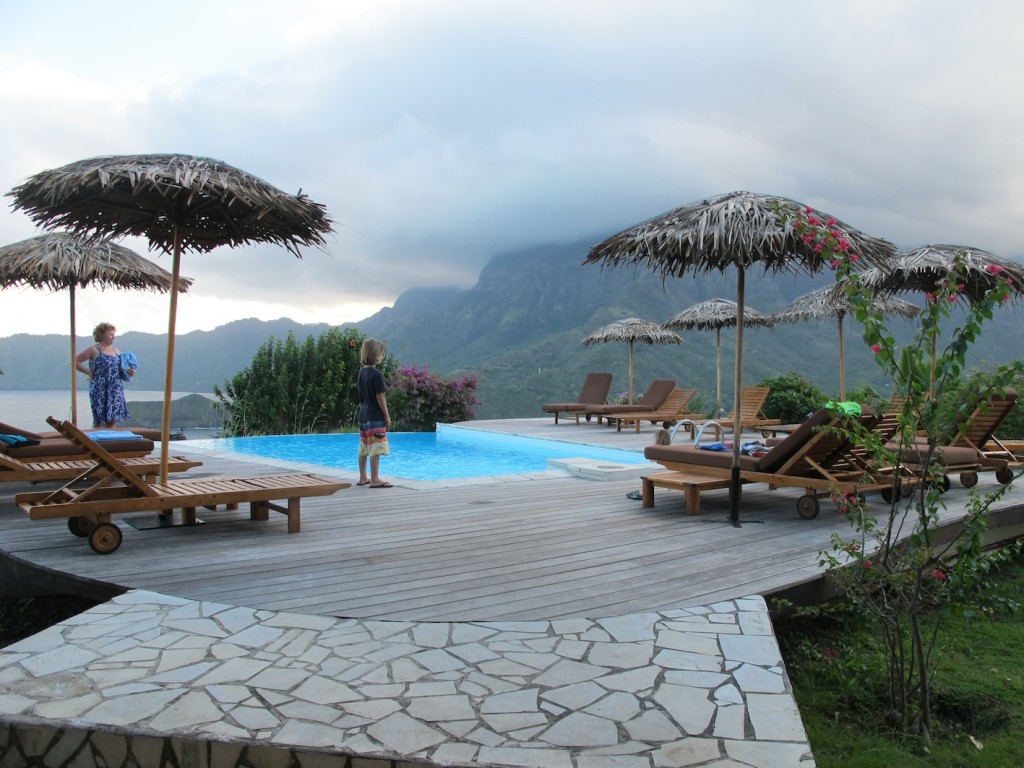 Great setting, shame about the food!

We’d had enough of anxiously watching boats swinging too close to us at night, so we decided to head round to Hanamenu, an anchorage on the northwest coast of Hiva Oa that we thought would be more protected from the swell and gusty squalls. We had a very pleasant leisurely sail up the west coast under just the jib, snacking on french bread and cheese for lunch, but as we approached the northwest corner it all changed. The wind picked up and came hard on the nose, there was current against the wind making for unpleasant lumpy seas, and the rain came down in sheets. We bashed our way into the anchorage under motor and looked dismally at our new temporary home – black sand beach, lots of swell, and sheer rocks on either side. Not quite what we’d been hoping for! 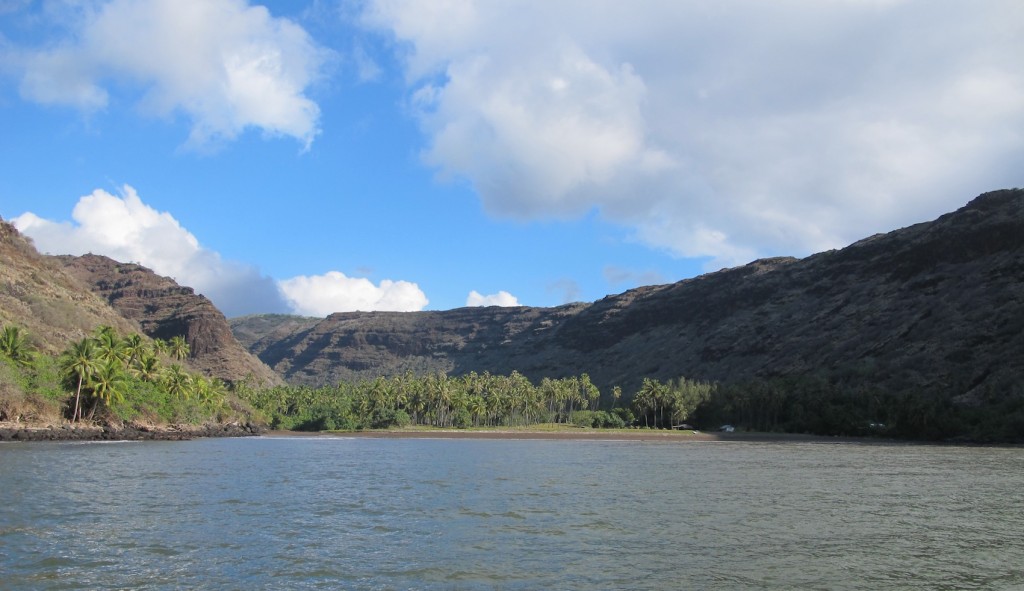 Hanamenu Bay during a lull in the squalls 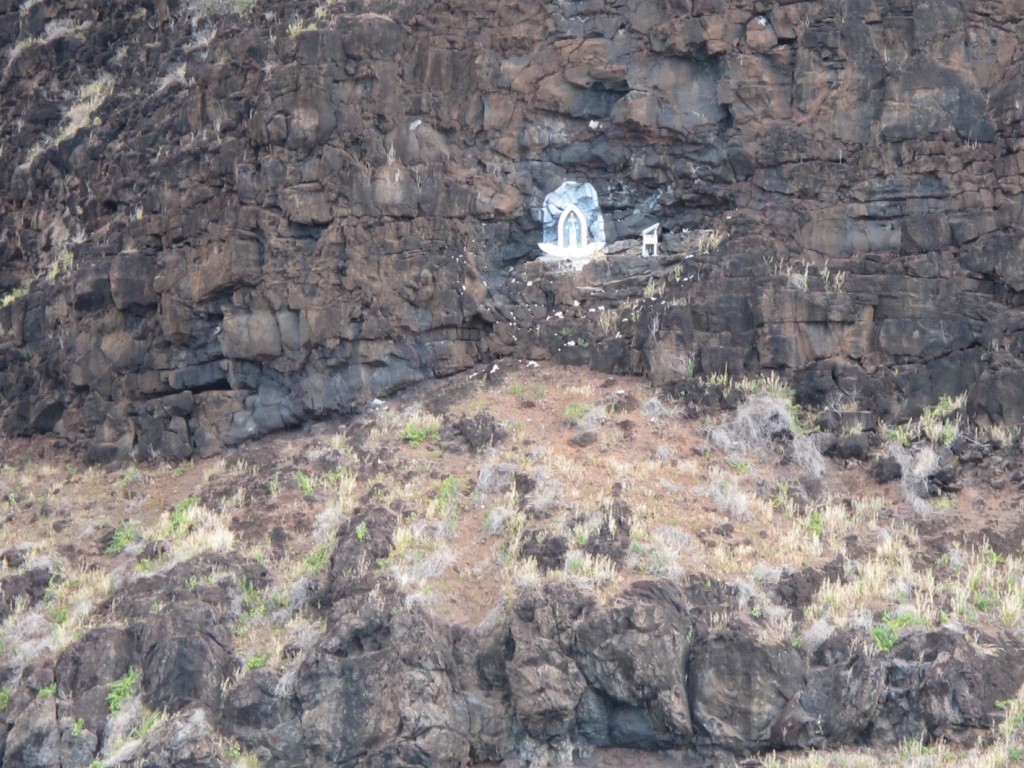 The bay must have a reputation with the locals – there’s a shrine built into the rock face, lit at night by solar power

The swell was too big to consider going ashore to find the waterfall, so we contented ourselves with a quiet afternoon on the boat. Sadly the next day was no better – Rehua joined us in the afternoon having had a similar experience rounding the north-west corner. So we decided to have an early night and high-tail it out of there at dawn to make the 76NM passage to Nuku Hiva.