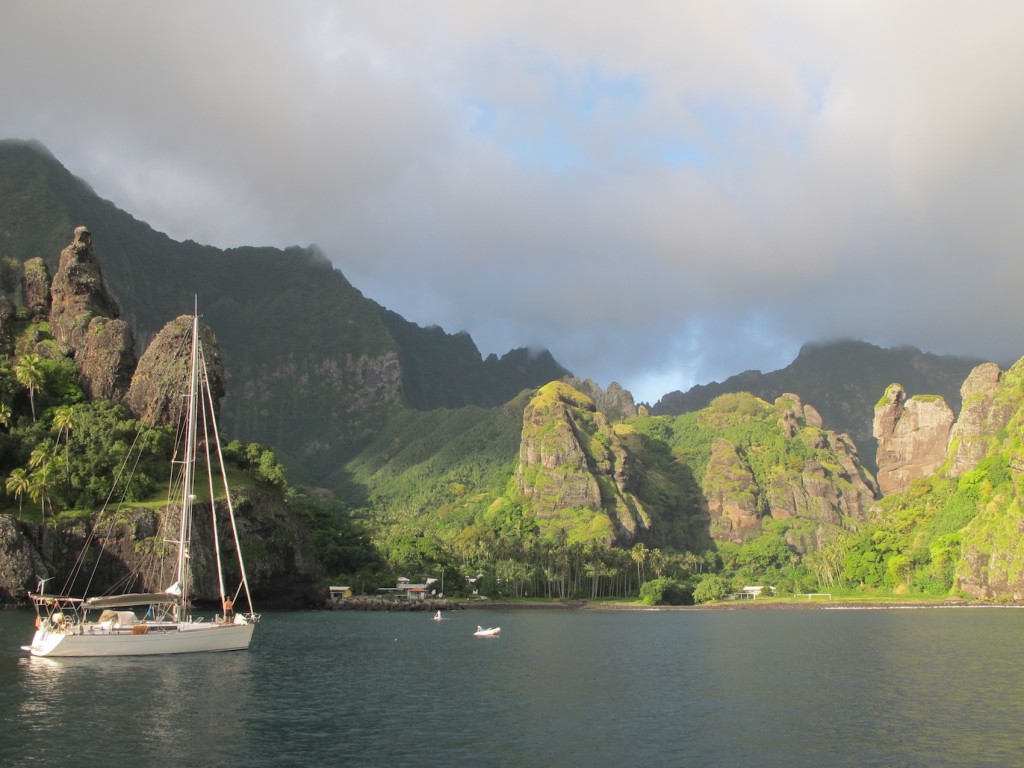 Jacques Brel and Crosby, Stills, Nash & Young sang about them, Herman Melville wrote about them, Paul Gaugin painted them, and here we are – in the stunning Marquesas, one of the most remote group of islands in the world and thousands of miles from the any continent. 15 volcanic islands rising majestically out of the sea, of which 6 are inhabited with a total population of just over 9000.

Our first landfall was Fatu Hiva – it’s not an official port of entry but as the most windward island of the group it’s the most obvious stopping point for yachts, and many cruisers like us run the risk of falling foul of the authorities, because frankly it’s too spectacular to miss. 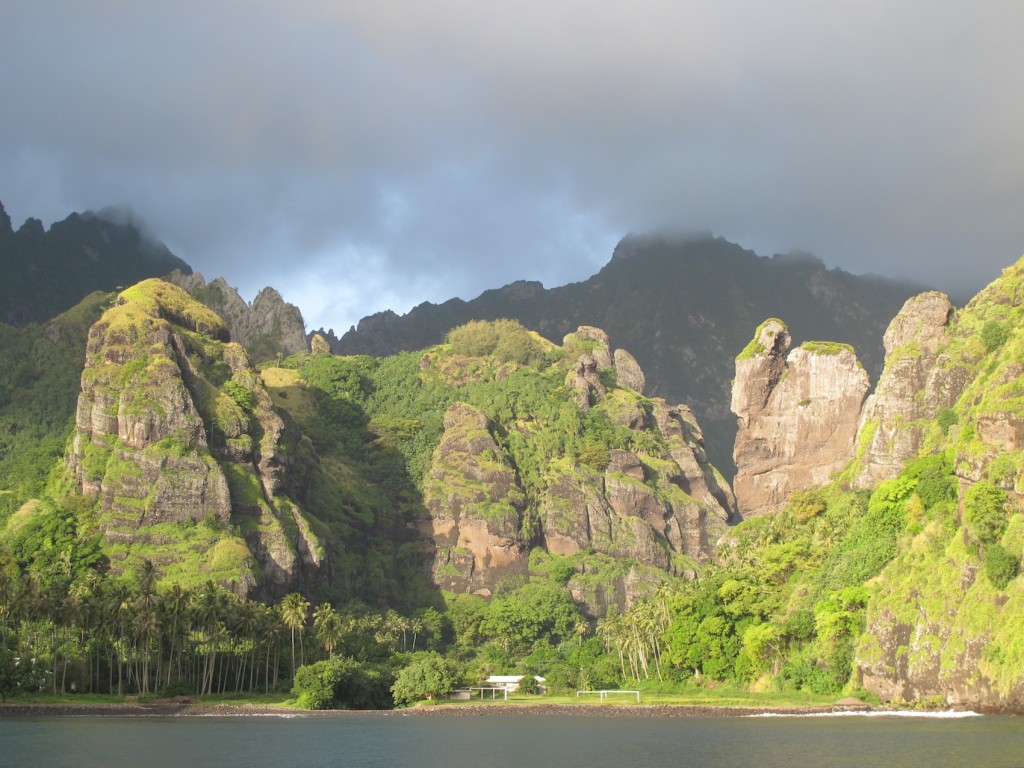 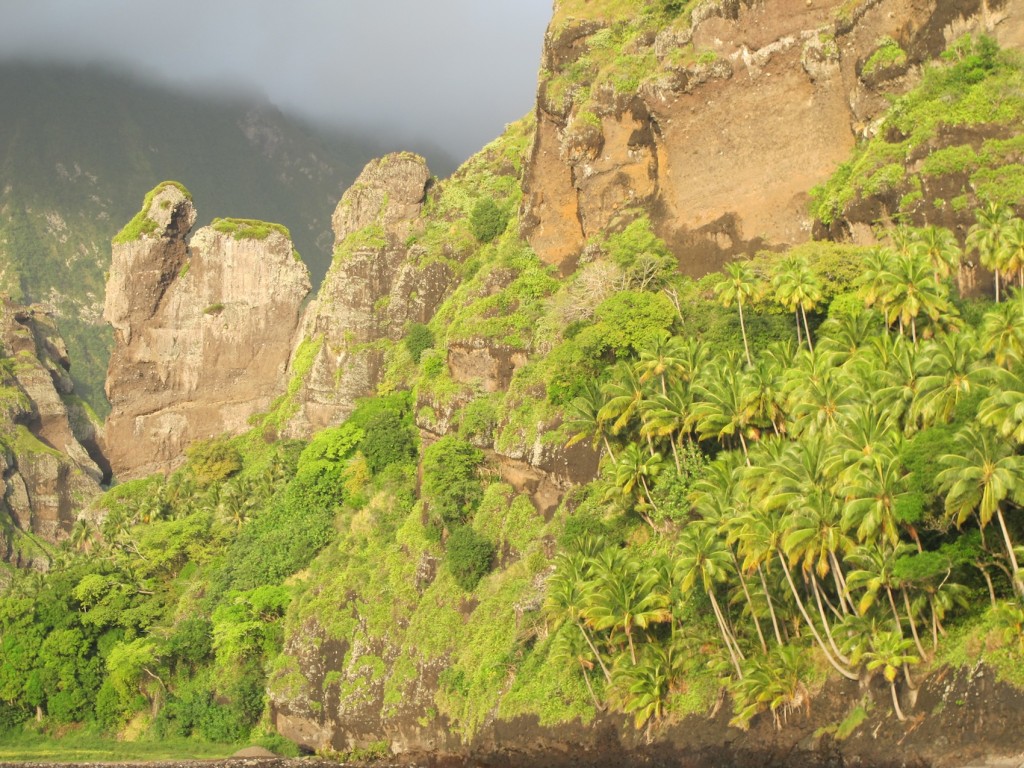 Can you see the face? Ebenezer Scrooge? Paul Keating?! 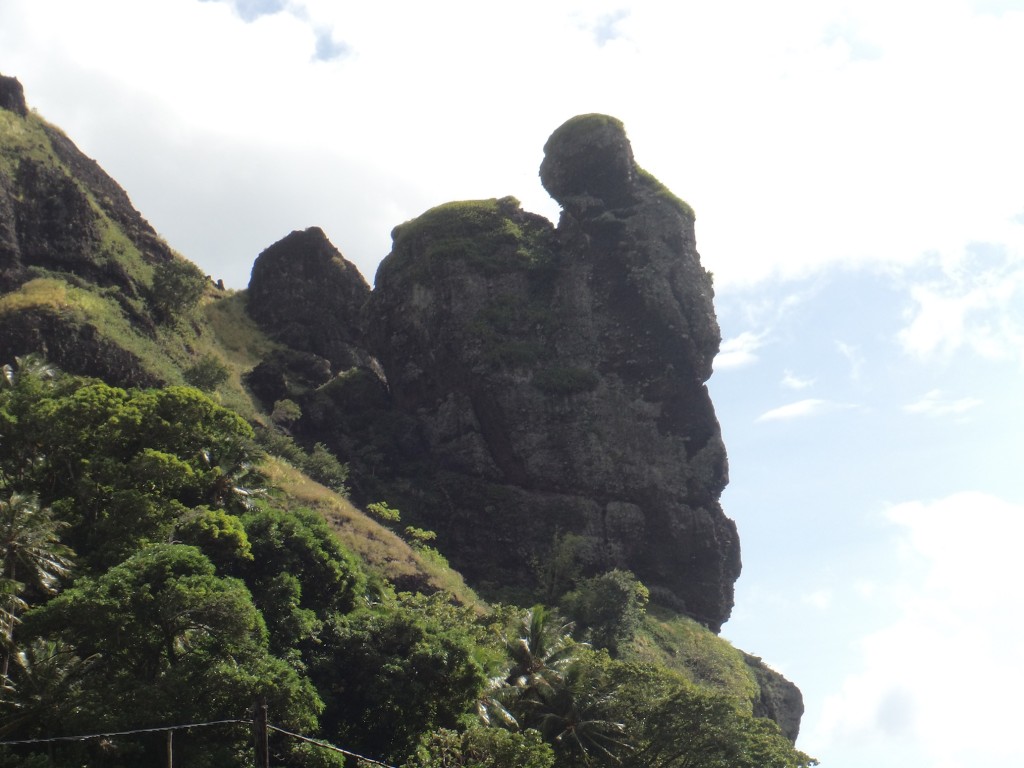 and here’s King Kong clinging to the rock 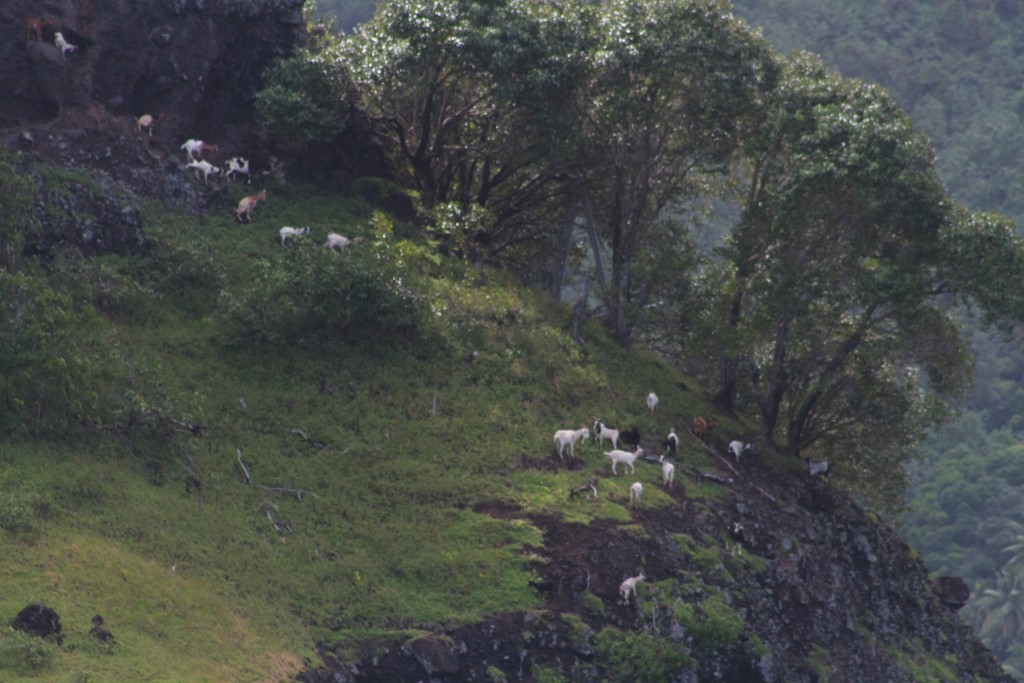 It seems that not all the mountain goats are sure-footed…

The bay suffers quite a bit of swell, and the occasional katabatic winds coming off the mountains cause strong gusts in the anchorage, but our anchor held well and it was a small price to pay for such an extraordinary setting. 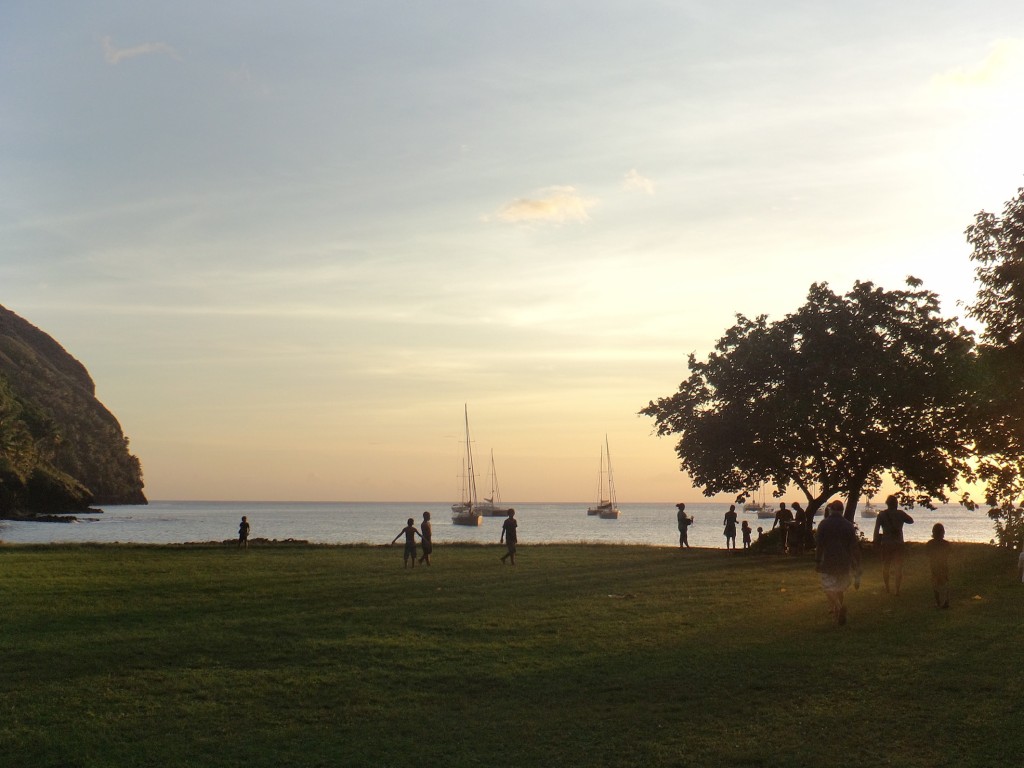 The anchorage at sunset

After a wonderful uninterrupted night’s sleep we went ashore to explore. The township is small with very few facilities except a primary school, church and single grocery store, but everywhere is very neat and tidy. 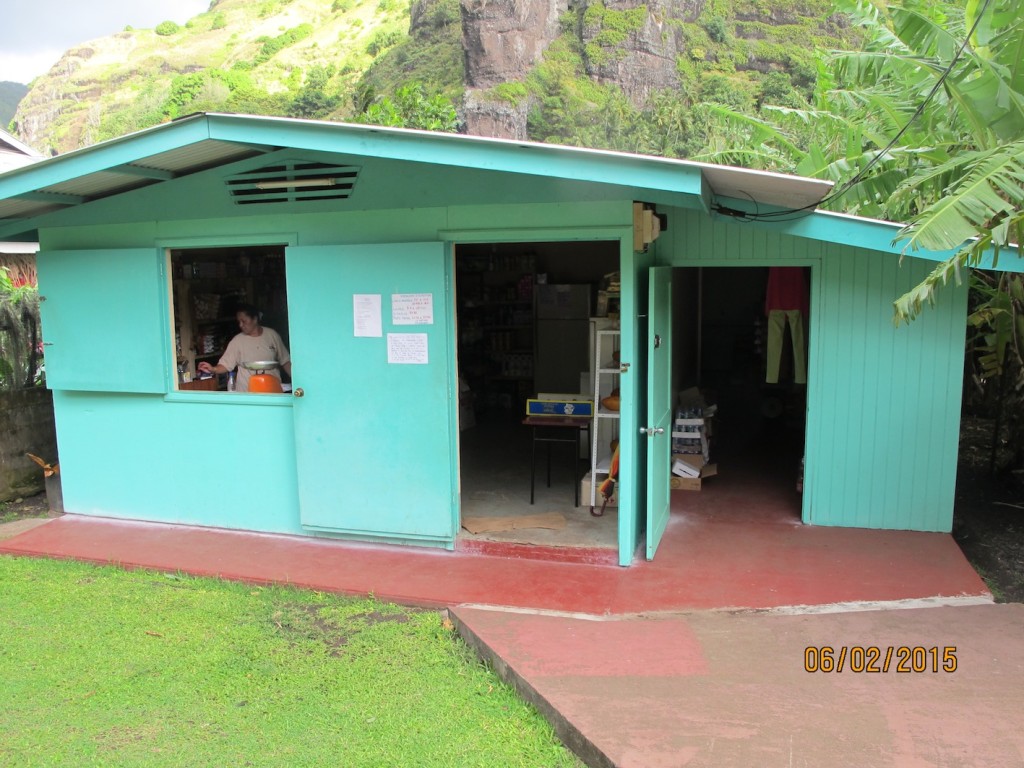 The one and only shop on Fatu Hiva

There’s no airport, so the only form of transport is via boat. (We later learned that at the age of 10 the local children have to go to boarding school on one of the other major islands, Hiva Oa, only returning home during the school holidays). There is a supply ship that supposedly comes every 3 weeks but it’s often delayed so anything other than local produce is scarce. 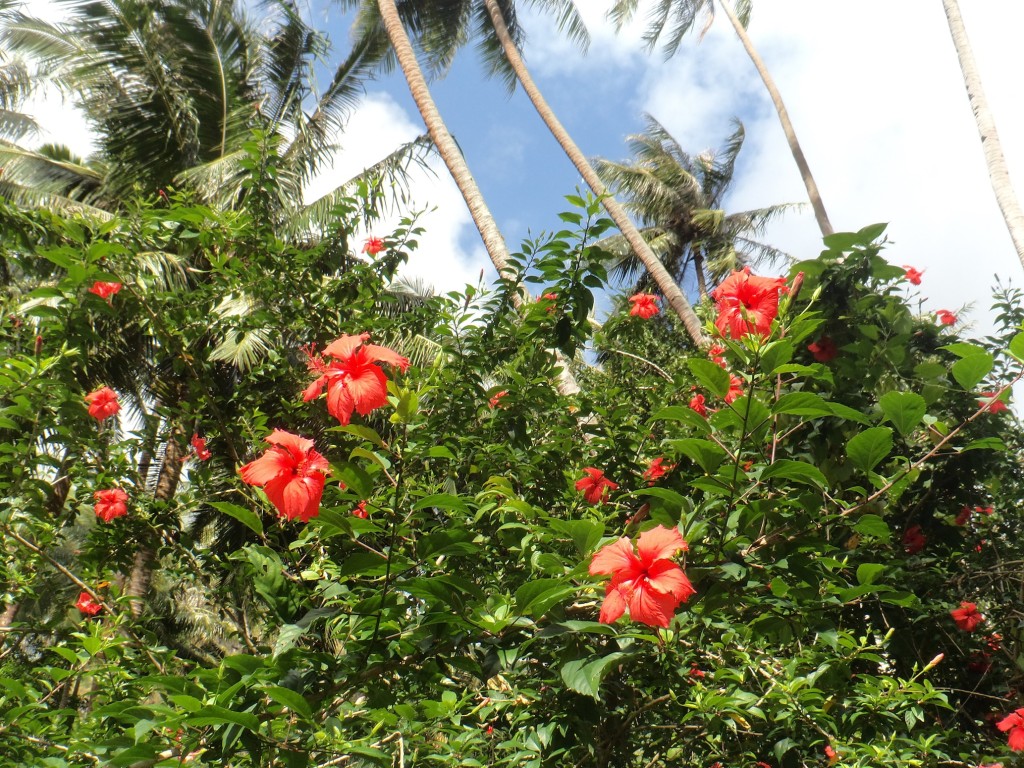 The roads are lined with tropical flowers and fruit trees – lemons, oranges, mangoes, grapefruit (‘pamplemousse’) the size of footballs. But every tree belongs to someone, so we asked at the shop where we could purchase some fruit and vegetables and the reply came “just walk up the street and ask anyone you see’. We passed a house with a huge pamplemousse tree groaning with fruit, and asked the elderly lady if she was prepared to sell us some. The only problem is that there’s no bank or ATM on the island and we had no local currency (French Polynesian francs). So we did what everyone does and came to a trade agreement – acceptable trade items include perfume, rope, wine or fishing gear. She was very happy to accept one bottle of wine for several large pamplemousse, bananas, passionfruit and fresh basil. We did the same at the grocery store, in exchange for some potatoes, tomatoes, papaya and breadfruit! We also got invited in to a local carver’s home to view his wood and stone Tiki carvings – they were beautiful but far too expense (and large) for us, so we politely declined. 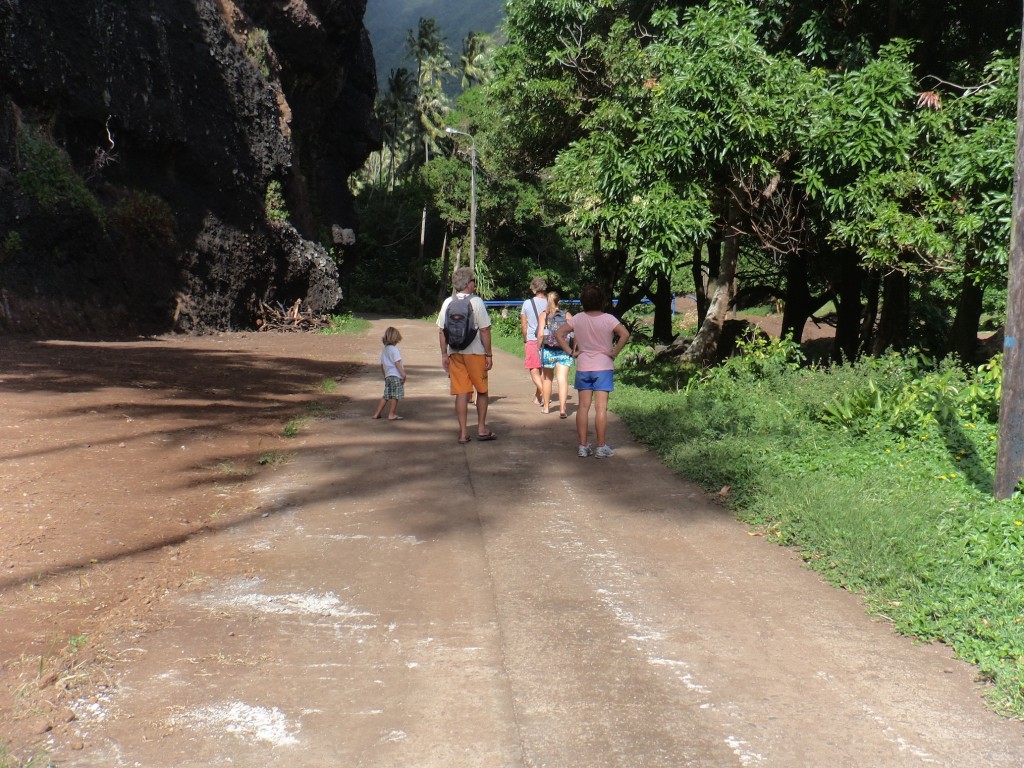 On Sunday we hiked up to the waterfall with Seathan, Audrie, Tyree and Aeneas from Rehua. It was a fantastic walk of about 1 ½ hrs, through the village and then off the beaten track following the stone cairns to mark the way, up through the wooded forests until finally we were at the base of the falls, where we enjoyed a refreshing swim in the freshwater pool. Heaven! 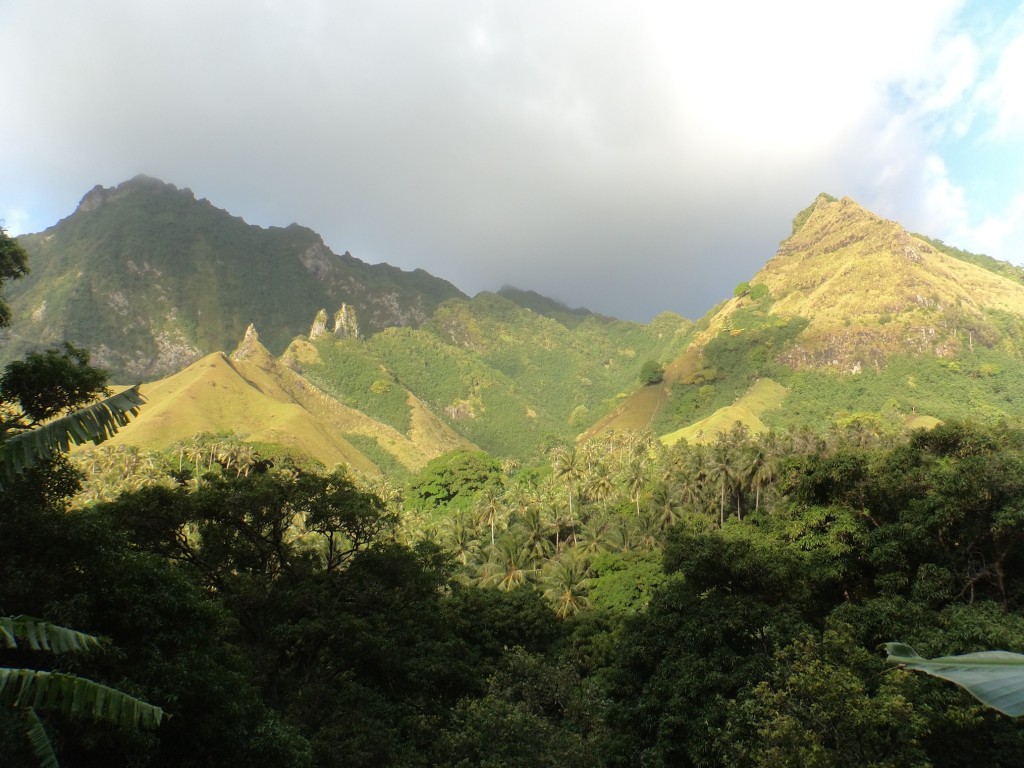 The views on the way to the waterfall were spectacular 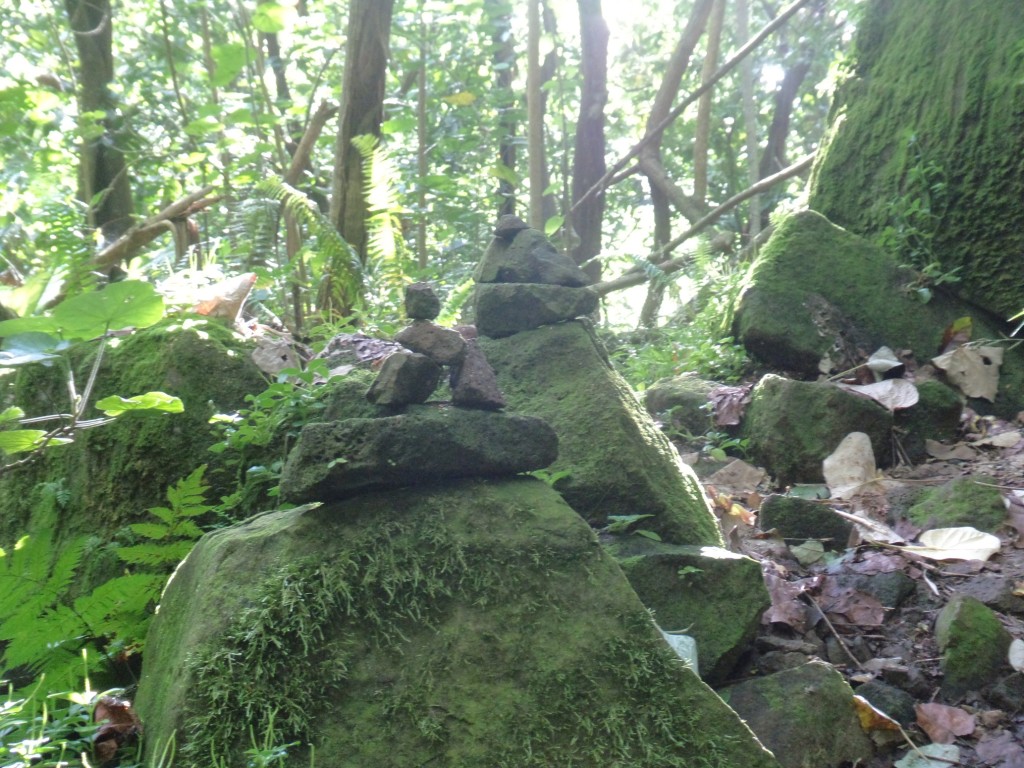 The stone cairns marking the path to the waterfall 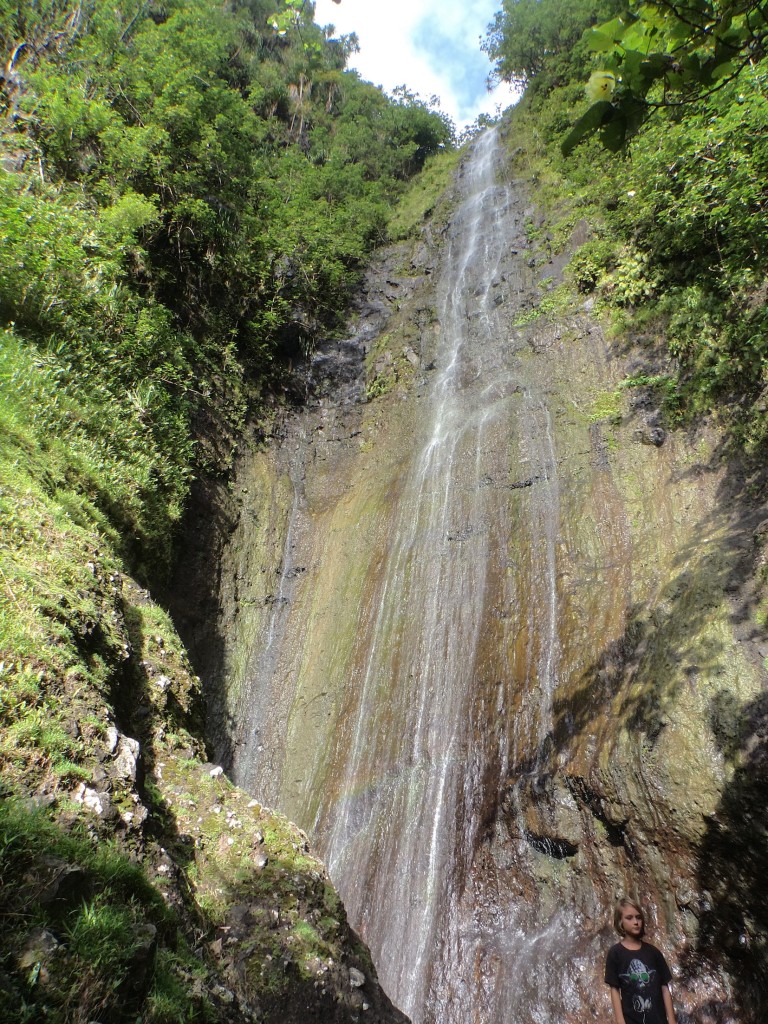 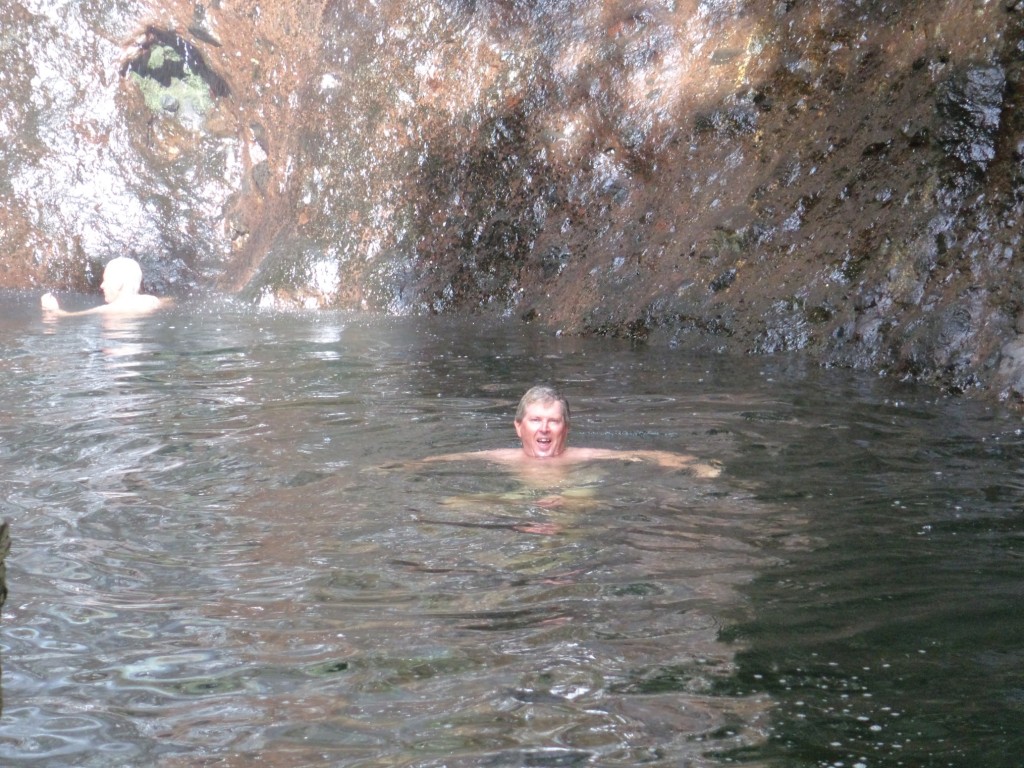 the boys enjoying a dip in the freshwater pool 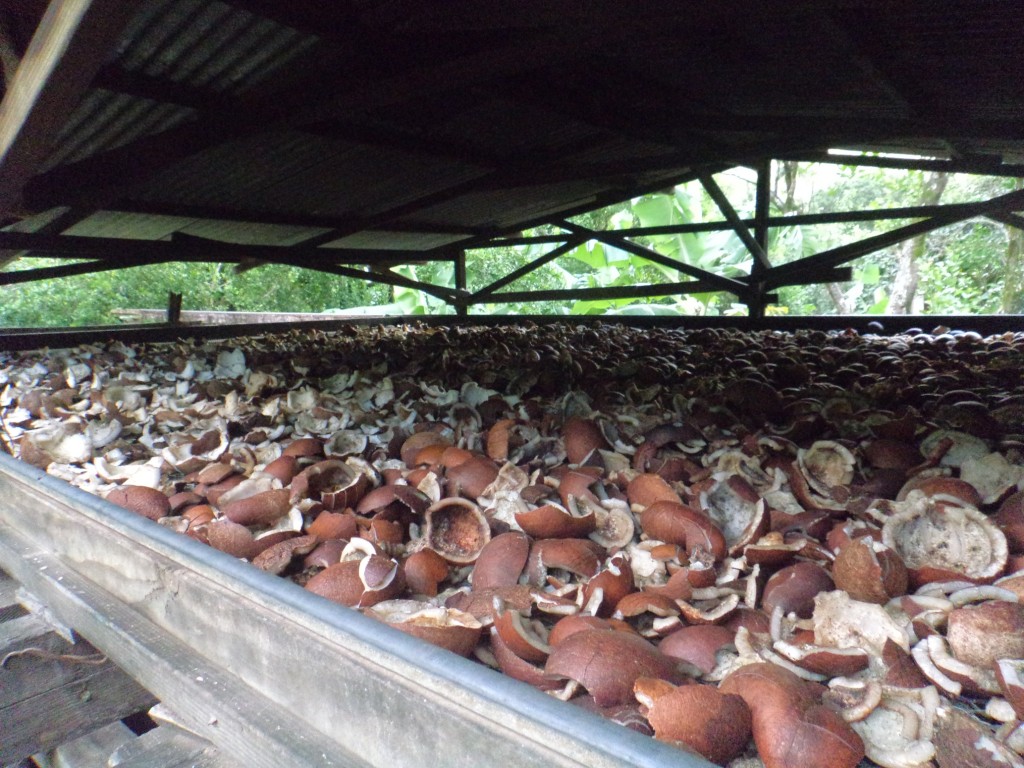 On the way back we passed the copra drying on racks, one of the main sources of income on the islands 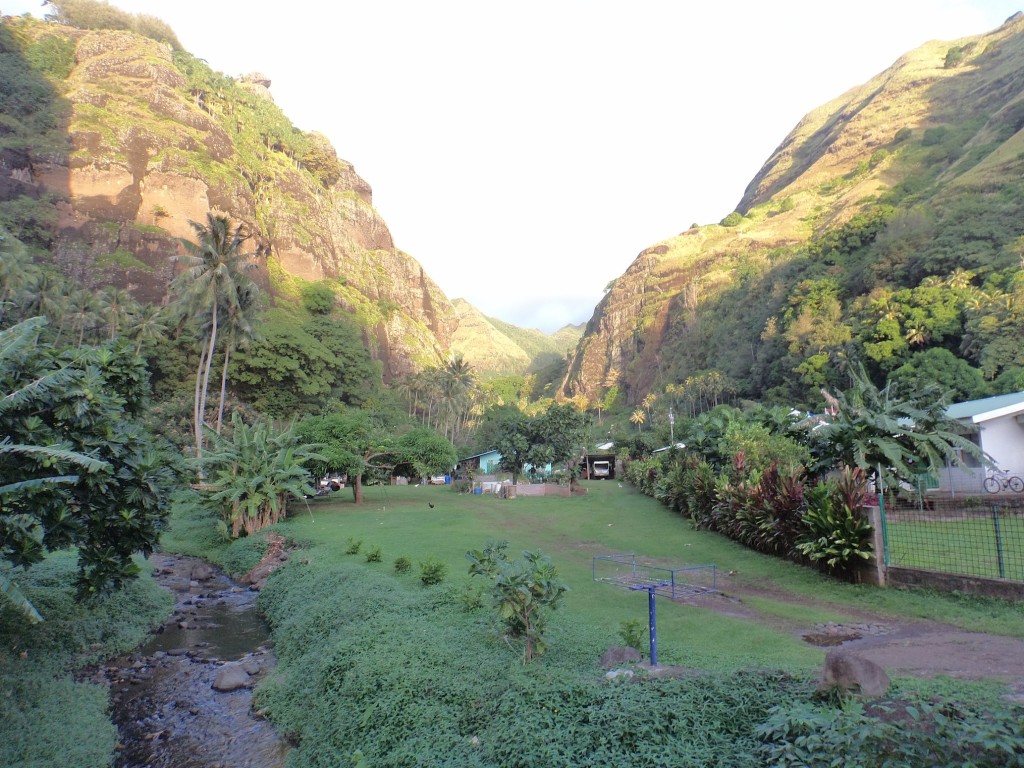 Houses in the valley, Fatu Hiva

We didn’t want to push our luck by staying too long at Fatu Hiva, so after a couple of days of R & R we sailed to the next island, Tahuata, where our friends on Bladerunner and Tinkerbelle were waiting for us in Hana Moe Noa Bay. One of the downsides of such spectacular mountainous islands is that they also attract a lot of rainfall – we had a very wet arrival into the bay with visibility down to a few hundred metres as the squalls came through. But after drying off, we had a great reunion with our friends and caught up on all the sailing stories. 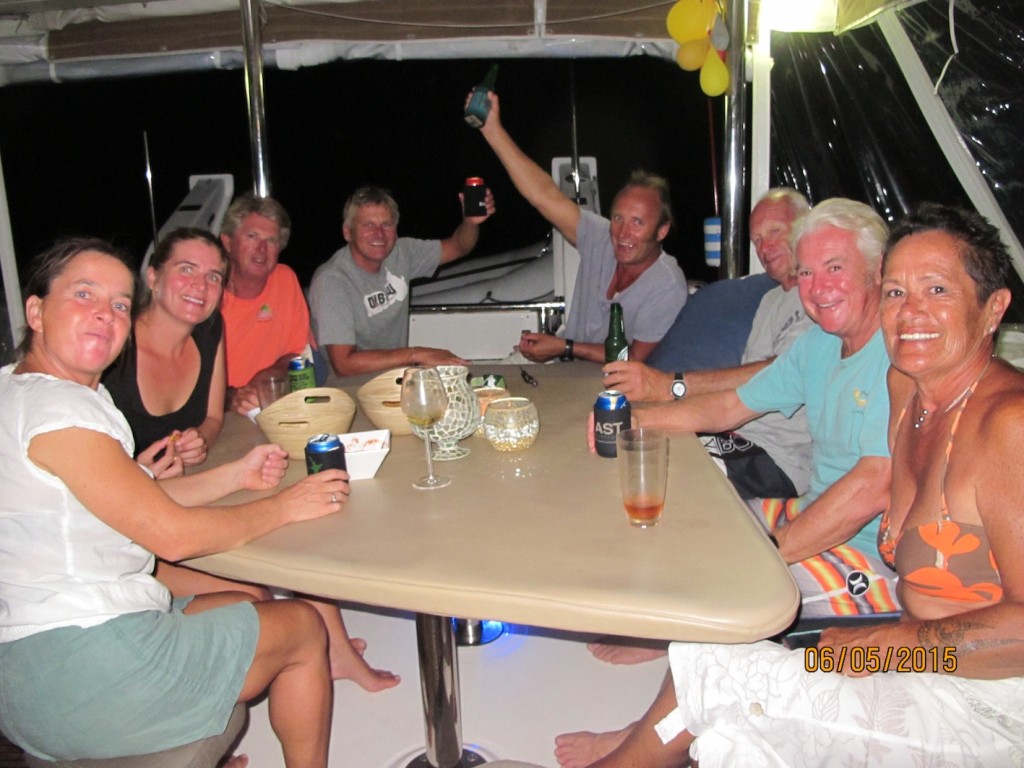 the crews of Toucan, Rehua, Bladerunner and Tinkerbelle enjoying a catch-up at Hana Moe Noa Bay

Hana Moe Noa Bay is beautiful, with a white sandy beach and clear water (rare in these parts) and very little swell. It’s probably one of the most popular bays in the Marquesas and there were many boats there, several of whom we recognised from our travels through Panama and the Pacific. It was also a great place to clean the bottom of the boat – we couldn’t believe how much green slime we’d accumulated, even on the topsides and back steps despite the fact that we’d been moving at more than 6 knots for most of the passage.

We would have loved to stay longer in this beautiful spot, but we were rapidly running out of supplies and felt we couldn’t delay checking in for much longer. We said our goodbyes to Bladerunner and Tinkerbelle, who were heading off to the Tuomotos and Tahiti, and pulled up the anchor to make the short sail to the relative ‘big smoke’ of the next island, Hiva Oa.