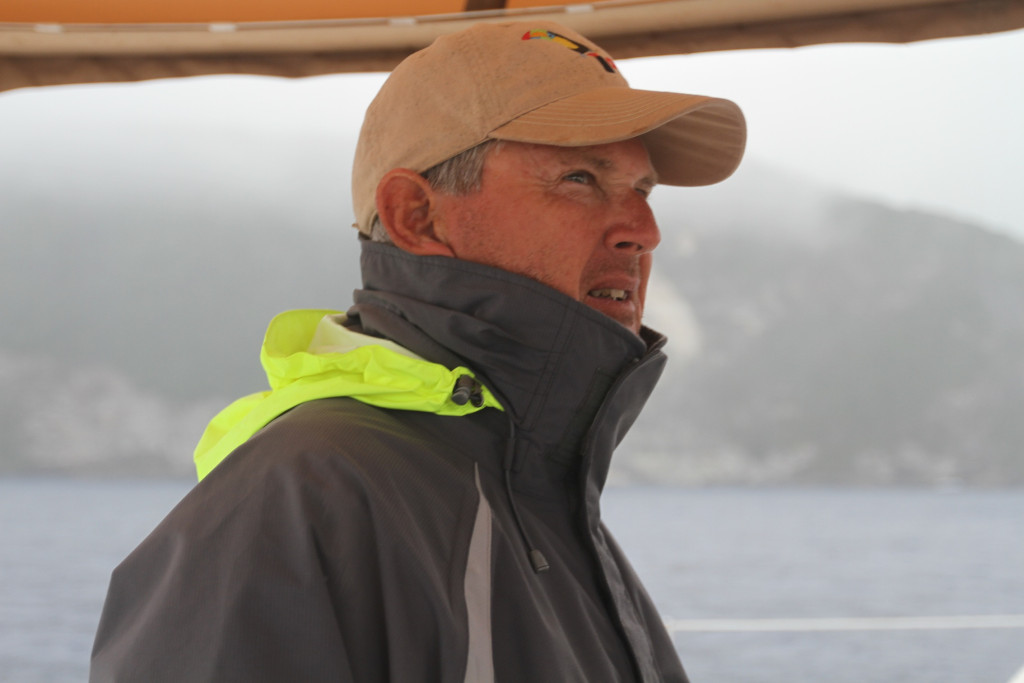 Our arrival in Tonga, more like the UK than the tropics!

What’s this? Rain and wind in the tropical paradise of the Kingdom of Tonga? Not exactly what we were expecting, but I guess we’ve been very spoilt with the weather so far, so we can’t complain. Most of the week we’ve been hunkered down on a mooring in the main anchorage, with occasional forays into Neiafu (the main town of the Vava’u group of islands) when the rain lets up. Much as we’d like to get out and explore the islands, it’s given us a bit more insight into the Tongan way of life…

Our first contact with a new country is by necessity the customs and immigration officials, and we’ve come to the conclusion that you can tell a lot about the place from that first interaction. Tonga is no exception. We tied up at the main wharf and tried to call customs on VHF ch26, but it seems that even though this is the official working channel for the port, it’s taken over by the Cruiser’s Net every morning from 8.30-9.00. OK, we’ll wait until they’ve finished chatting…finally we got a break and called customs. No response. OK we’ll make a cup of tea and continue waiting. We’d heard about “Fakatonga” – the Tongan way, unhurried – so we were not too surprised. Eventually the customs officer arrived, followed by the health officer and the quarantine officer, all dressed in their traditional Tupenos (cloth-wrapped skirts). There was a short delay when the health officer dropped his thong (flip-flop, in case our American cousins are alarmed!) in the water alongside the wharf, requiring some rescue attempts with our boat hook before they finally clambered aboard to fill out the official forms. We plied them with coffee and biscuits and had a pleasant chat. The Quarantine officer asked about our fruit, veg and meat that we had on board. Uh-oh…I was worried he was going to confiscate it. I offered him another biscuit and waited for his response. There was quite a long pause and then he said “it’s OK, you can keep it, just don’t bring it ashore..”. Phew! The customs officer asked if we had a US$1 note he could have as a souvenir. We obliged (and later learnt that he asks all the boats the same thing!). The health officer asked to borrow a pen – later when I went back to his office to pay our dues he pulled out a pen from his breast pocket that looked remarkably similar to ours! But it was all good-humoured and painless and one of our more interesting check-ins.

Spying a Digicel shop near the wharf, I thought I’d duck in and organise some wifi (always a priority!). The young guy behind the counter obviously wasn’t keen on becoming Salesman of the Year – “No, we’ve run out of data cards. You’ll have to buy a Sim card and put credit on it, but the network doesn’t work well”. “Do you mean just at the moment or it doesn’t work well all the time?” He shrugged. “Is there any other way I can get wifi?”. Another shrug. Nonplussed, I left the shop, wondering if it was just me, or a communication problem. I resolved to try again later when I was less sleep-deprived. Welcome to Tonga!

The anchorage is full of moorings, most of which are occupied by the backlog of boats waiting for the weather to clear. But we found ourselves a spare mooring close to the Aquarium Café (free wifi!!) and settled in, thankful that it’d be a few more weeks before we’d have to face another long passage. 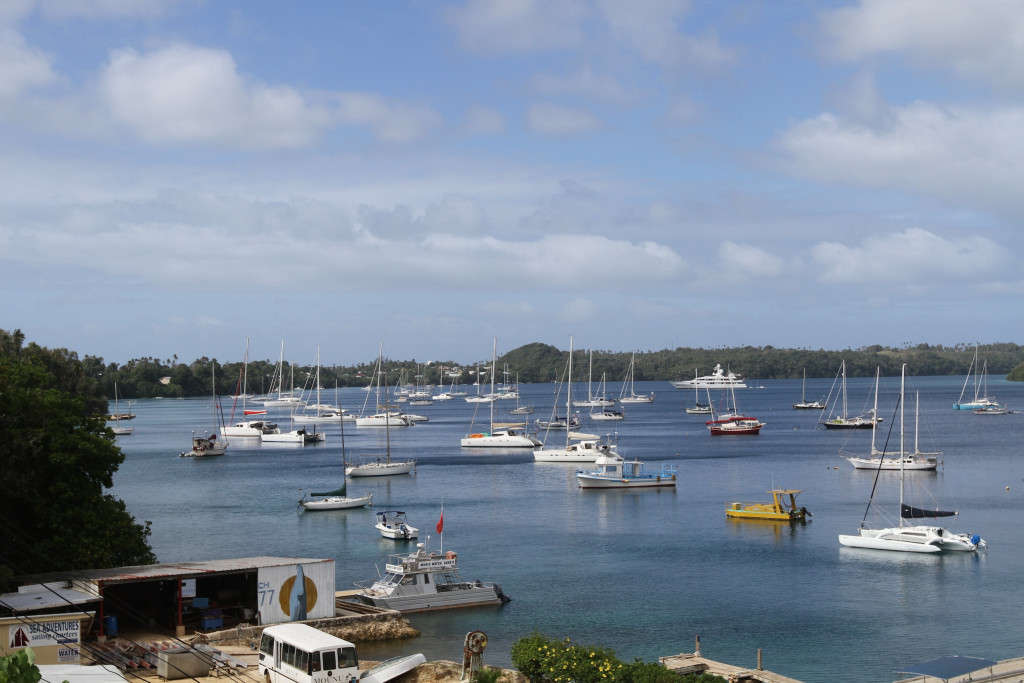 Toucan in Neiafu Harbour when the sun came out briefly

Neiafu is a small, one-street town with no major supermarket but lots of small grocery stores, surprisingly sparsely stocked. Hmm, provisioning here is going to be a challenge, I wish now I’d stocked up more in Niue. But there’s an excellent fresh fruit and vegetable market near the wharf and also a fish-market. Yachties are well catered-for at the Tropicana Café, where you can organise LPG fills, laundry, boat services etc and there’s a new boatyard in town with a haul-out facility. It seems many boats stay here for the cyclone season, either on one of cyclone-rated moorings or hauled out on land. 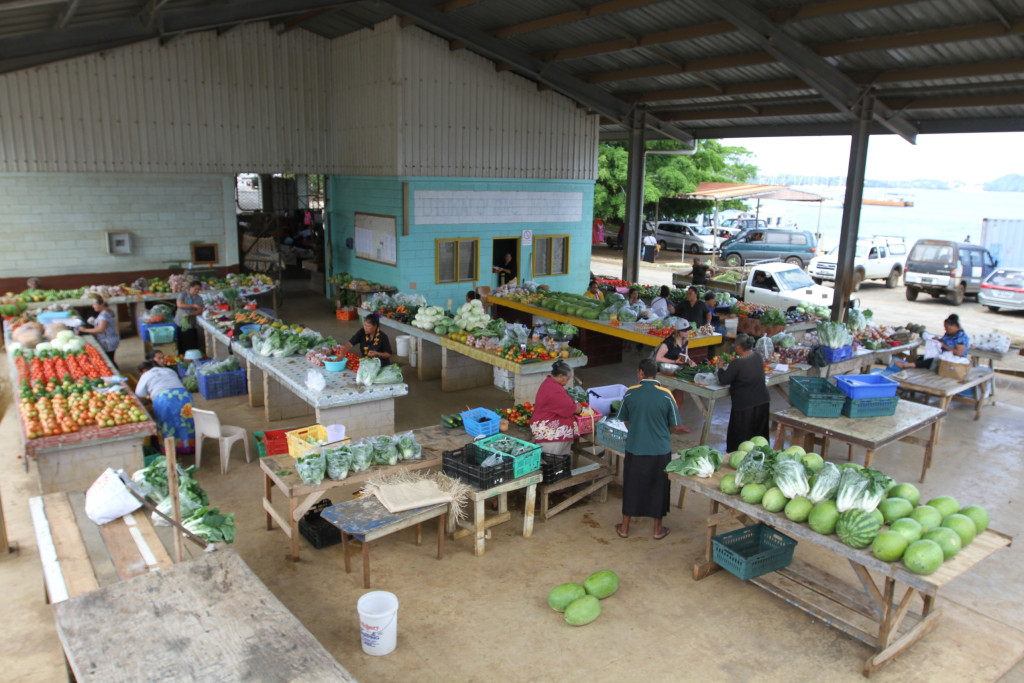 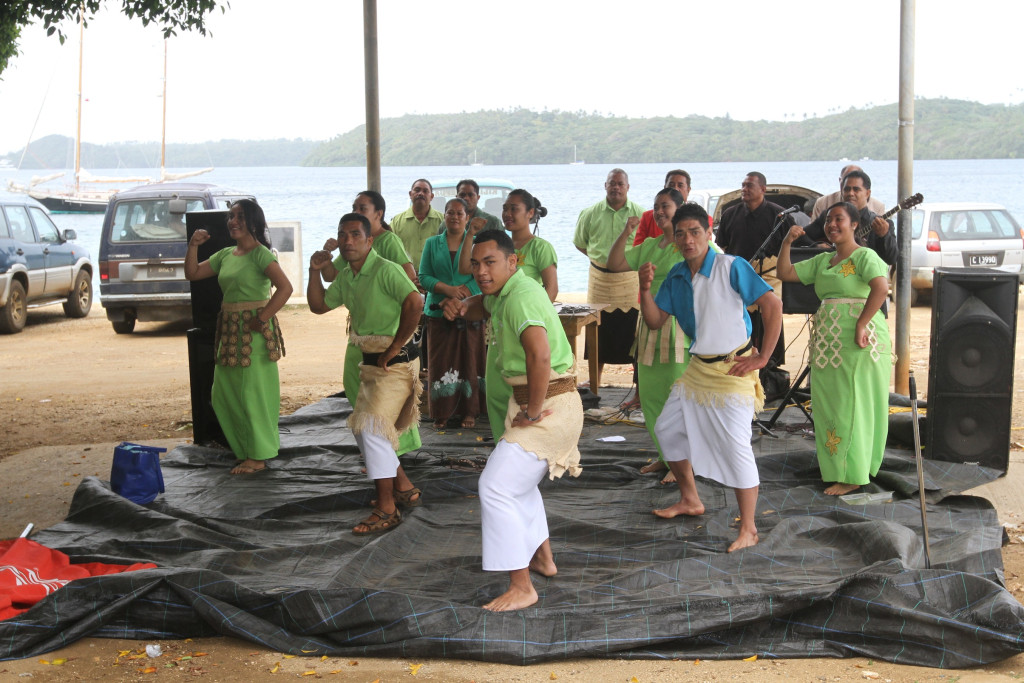 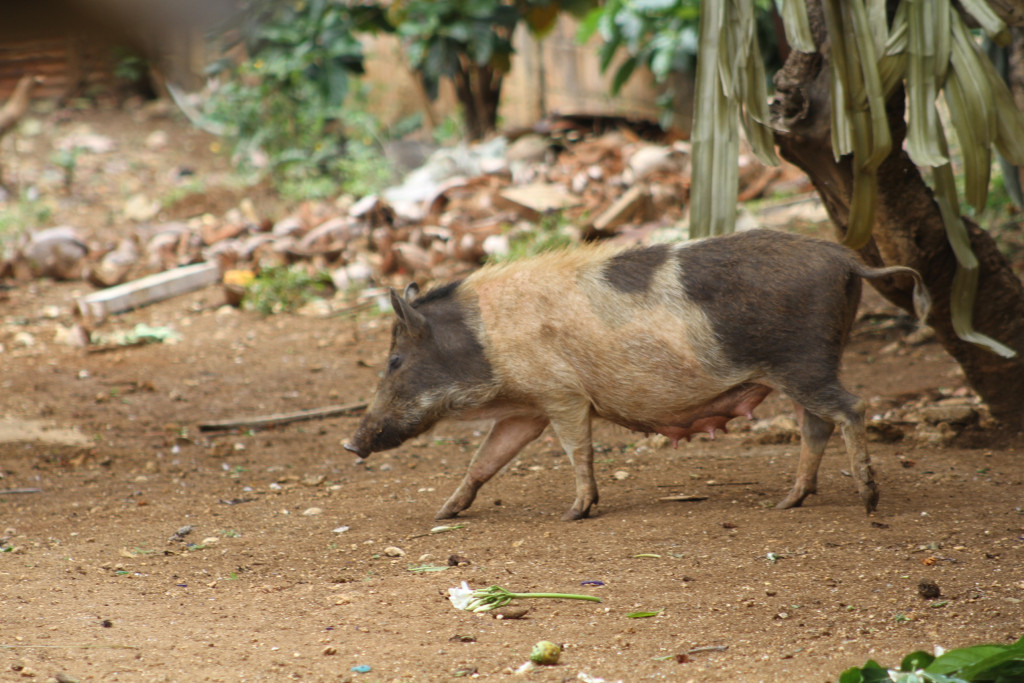 This little piggy went to market…. 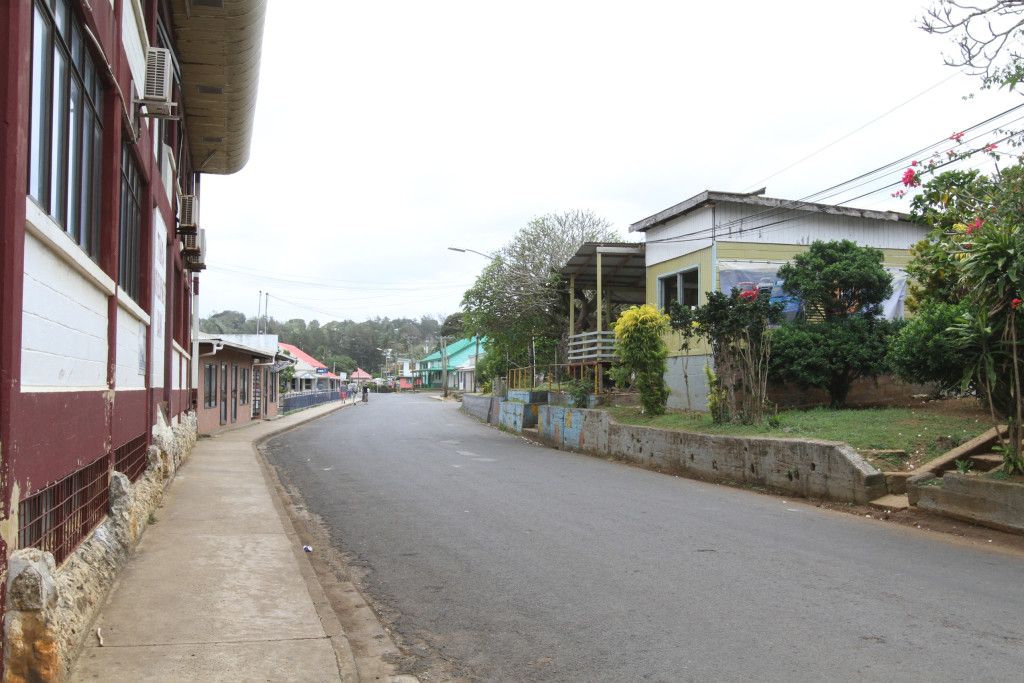 The deserted main street of Neiafu on Sunday morning

Tongans take their religion seriously, and nothing, but nothing, happens on Sundays except church and family gatherings. Curious to understand more about Tongan culture (and risking another lightening bolt from above) I took myself off to the Catholic cathedral on Sunday morning, which was packed to the rafters with local families in their Sunday best, singing their hearts out and accompanied by a brass band. Quite an experience! 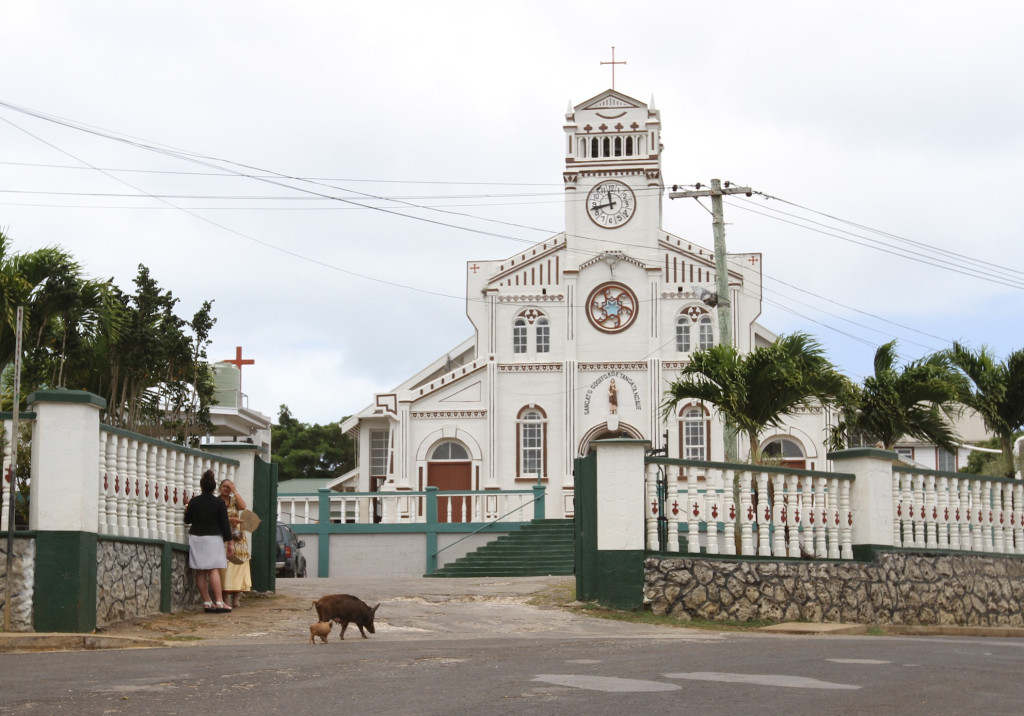 the Catholic cathedral in Neiafu, with visiting pigs 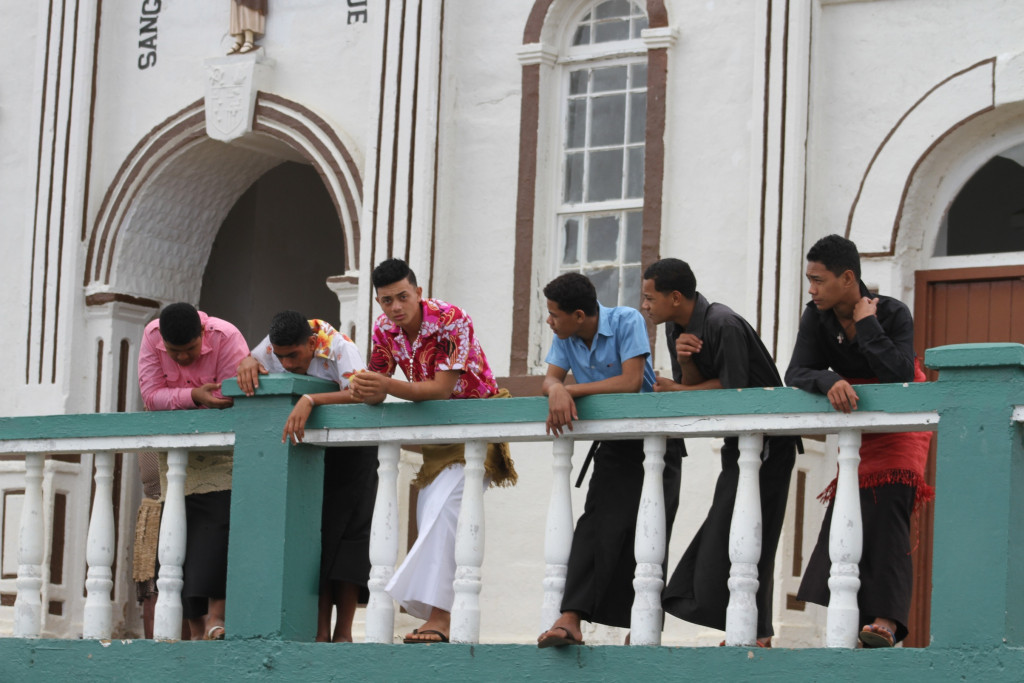 The local lads hanging out at church 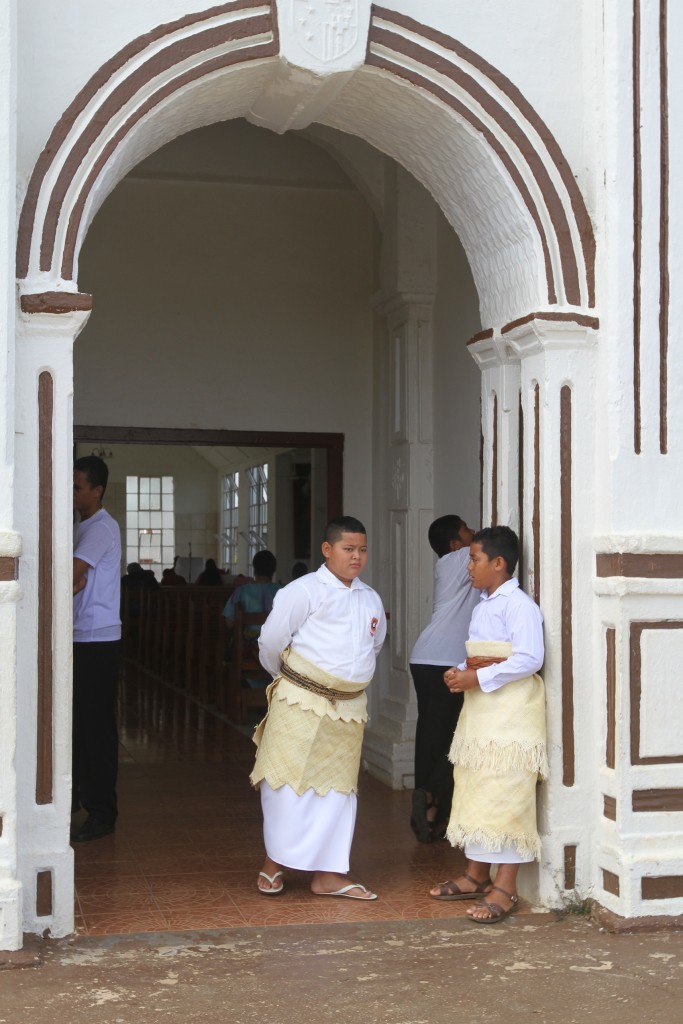 Tradional dress in Tonga is the Ta’ovala, the woven mat worn like a suit and tie is worn by westerners. 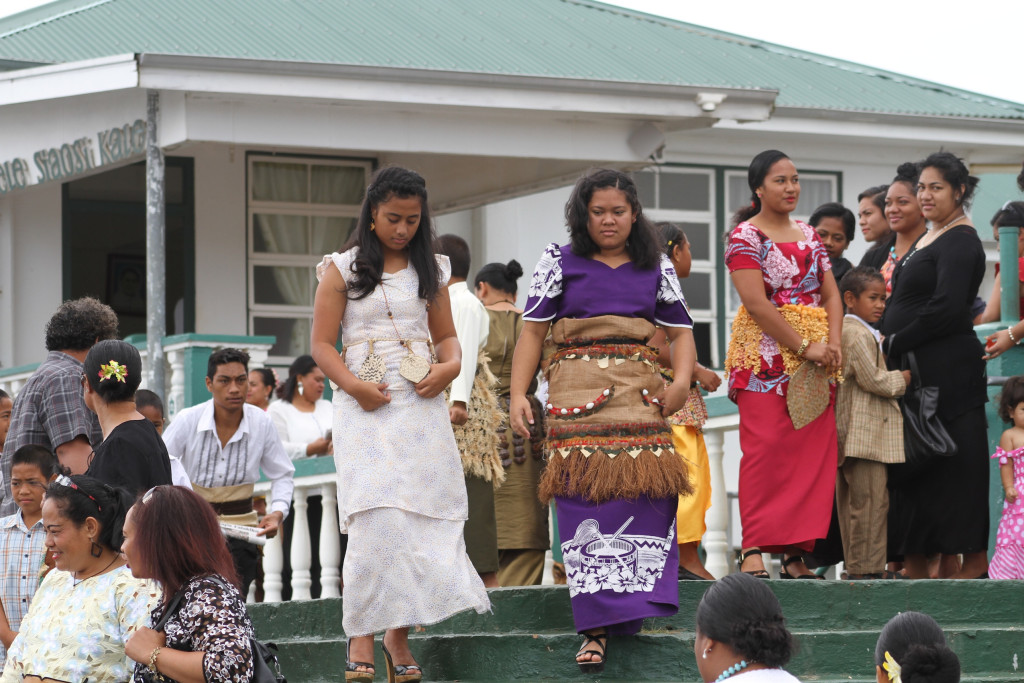 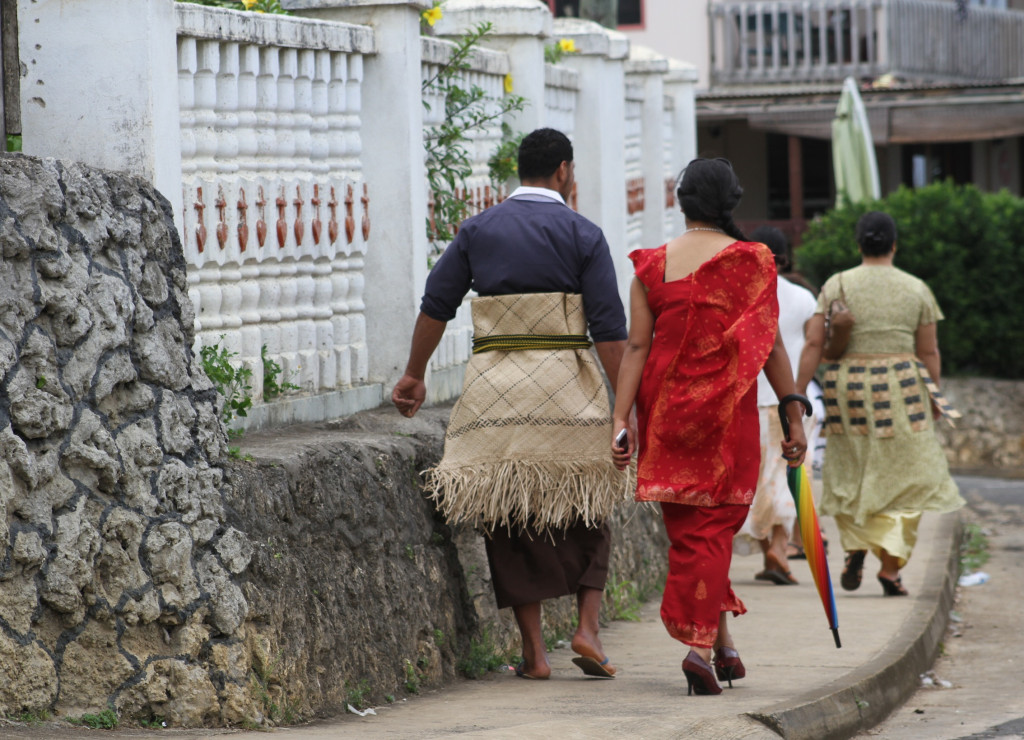 Heading home from church, either on foot… 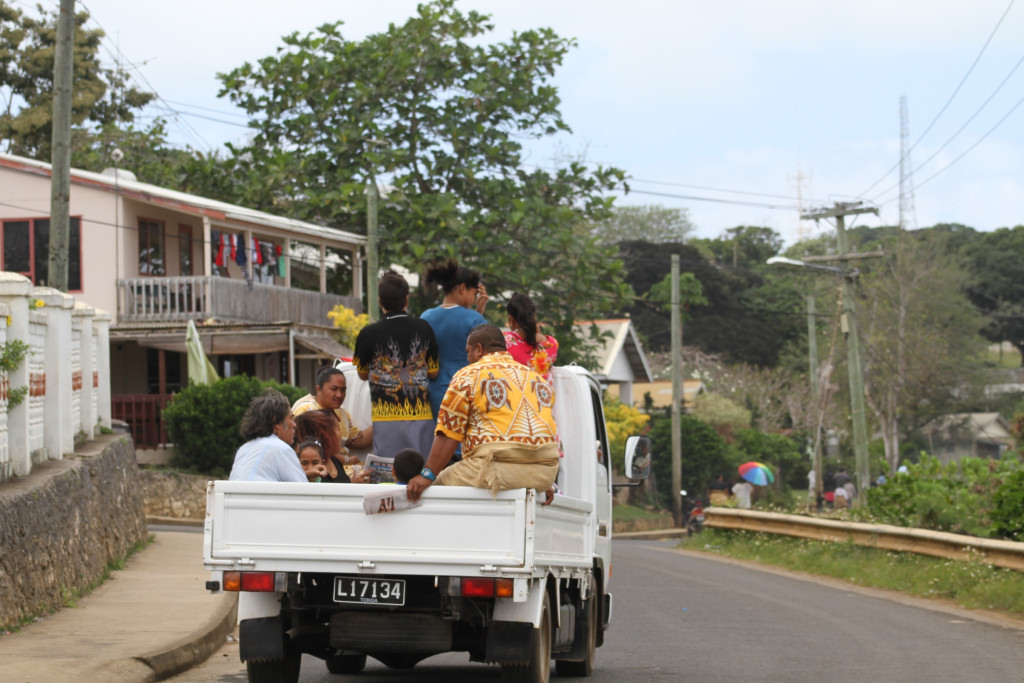 or in the ute…

And then of course there was the other religion to pay homage to – Rugby. We found the Seagull Bar on the foreshore, owned by Greg a fellow Aussie, and he assured us he would have the TV on for the World Cup quarter-final between Australia and Scotland. It was going to be some ungodly hour of the morning but with Toucan and Rehua representing both countries there was no question of us not turning up. 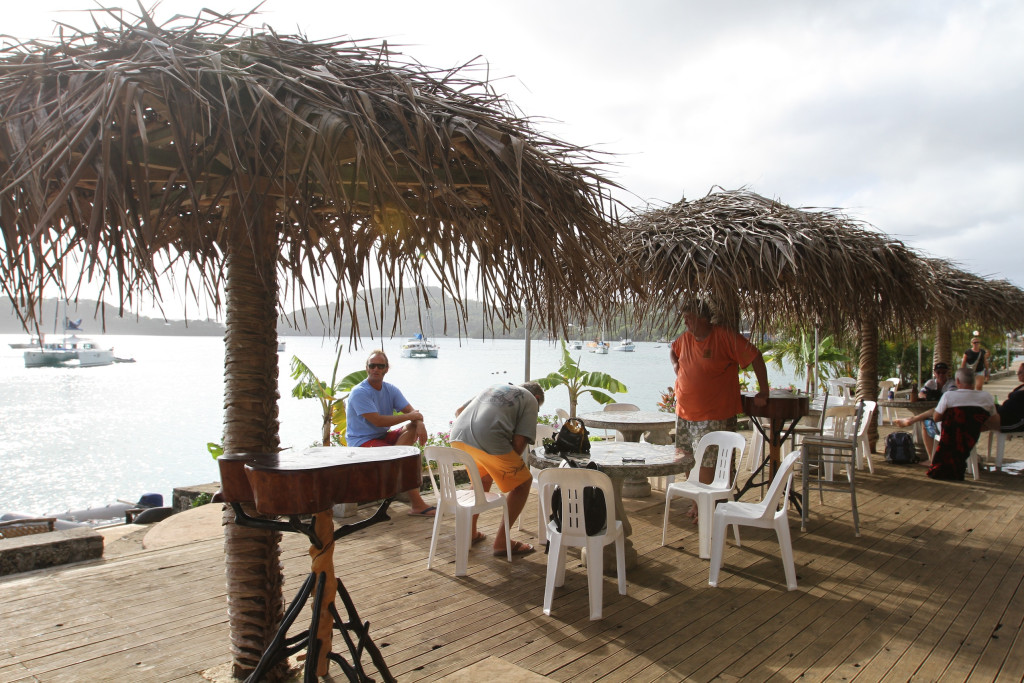 Checking out the Seagull bar before the big match 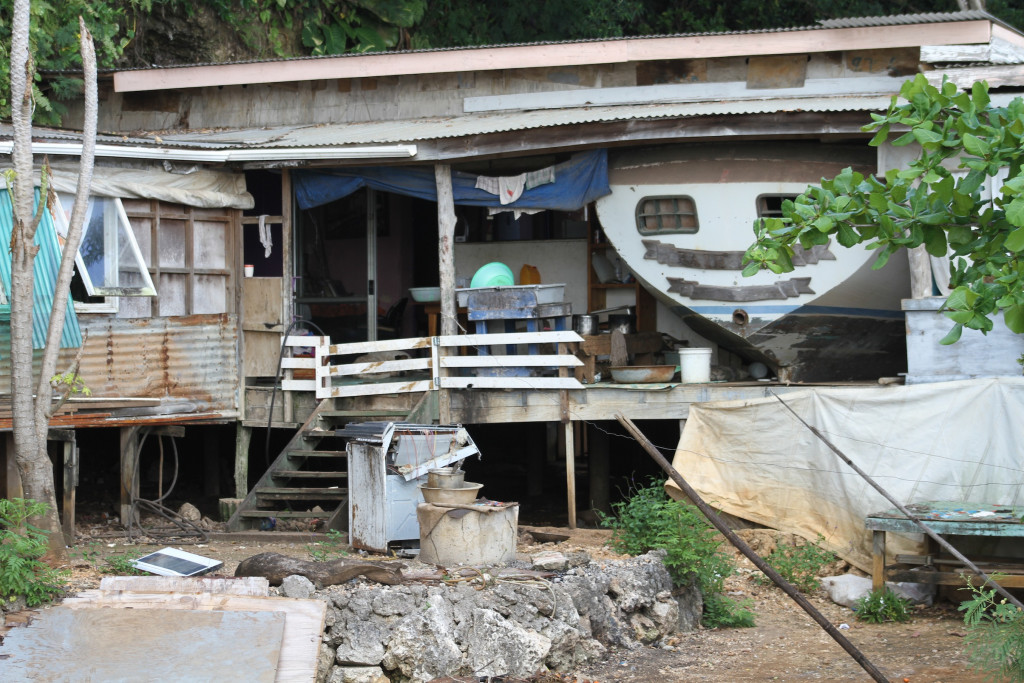 Next door, we discovered what happens when yachties move ashore…

Bleary-eyed we made an appearance at 4am, together with Seathan from Rehua. I’d like to say the Wallabies were the better team on the day, but we weren’t, and it was only due to some dubious refereeing decisions that we scraped our way into the semis. The challenge is to find a way to follow the next game against Argentine once we’ve left Neiafu. The skies have cleared, the sun has got his hat on, hip hip hooray, so we’re off to explore the islands and find some clear water for play!

2 Responses to The Kingdom – Tonga