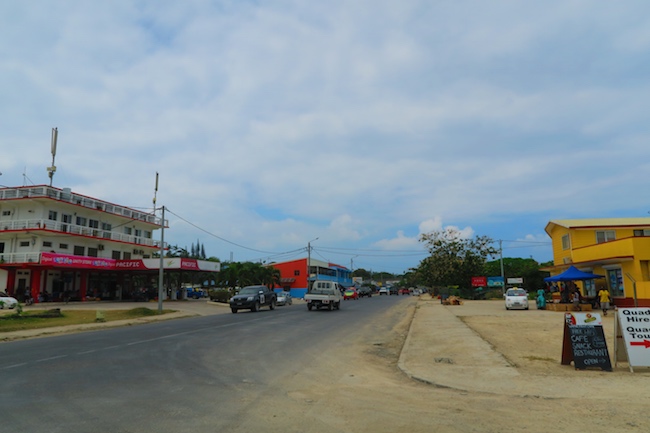 The wide main street of Luganville, constructed in WWII for all those US tanks.

Clearing in is always an interesting process when you’re on a yacht. It usually requires a large helping of patience, good humour, stamina, and orienteering ability, and Vanuatu didn’t let us down on any of these counts.

I awoke at dawn, worried that we’d be reprimanded by Aore Resort for dropping an anchor in front of their resort. Daylight revealed that yes, we were right in front of the resort and lo and behold there was a spare mooring not 100 metres from us that I’d obviously missed in the dark and my fatigue. Oops! 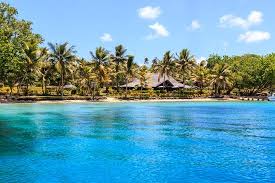 The pristine waterfront off Aore Resort

I woke my slumbering and somewhat reluctant skipper (we’d had only 3 hours of sleep since arriving), and, as surreptitiously as one can do with 40 metres of chain, we raised the anchor and motored back across the channel to the designated checking-in anchorage just to the west of the main wharf. It wasn’t an ideal spot on a lee shore, but it would do for a few hours while we cleared in.

We called up Customs on the radio and they told us to come in to the office. All very well, but where’s the office and where do we park the dinghy? The commercial wharf was a huge concrete structure with no visible sign of access. By now “Nimrod” had joined us in the anchorage and were similarly puzzled by the Customs officer’s directions. There was a small beach near the wharf so we decided to go in and leave the dinghies tied up there. As we did so, two biosecurity officers turned up and told us they needed to come out to the boats first to clear us for quarantine. OK no problem. We ferried them back to our boats and the process was easy and friendly – they let us keep our fresh food, just asked us not to bring it ashore which seemed a very reasonable request.   But we still faced the problem of finding somewhere to leave our dinghies while we visited customs and immigration. The biosecurity guys told us there was a small dinghy dock further west that we could tie up to, so we followed their instructions and found ourselves at a private dock belonging to a local bar/café. We asked the staff if it was OK to leave the dinghies there for a short time and they gave the go-ahead, so off we went in search of the immigration office.

‘Go to the blue building’ the biosecurity guys had said, waving vaguely towards town. It seems that blue is a favourite colour in Santo so after several false starts we finally found the right one. “Immigration?” “Yes”. Ah, thank goodness. “Oh, but you have to go next door to the port office first to pay your fees then come back here”. So off we trot next door to pay our fees, then back to immigration where they gave us the forms to fill out. In French. “You don’t have any English forms?” “No, sorry, we’ve run out”. Vanuatu was jointly run by the French and English until Independence in 1980, and both languages are still taught in schools here as well as the national language of Bislama. Luckily my schoolgirl French got me through the form-filling and then after parting with more money it was off to customs – all the way down the end of town at the commercial wharf. By now it was mid-morning and the tiredness and heat were starting to catch up with us – it was feeling like an ordeal of mammoth proportions. The commercial wharf is being re-developed with Chinese investment (aha, so that’s why the Chinese fishing fleet was in Vanuatu waters –we later learnt the locals are none to happy about that) so we picked our way through the construction site trying to find the customs office. Of course there were no helpful signs so eventually we asked the workmen to point us in the right direction. OK, so now customs is done & dusted, all we have to do is go to the biosecurity office to pay our fees. It’s just that the biosecurity office is even further out of town, up the hill. It’s all taking much longer than expected, so I volunteer to go into town to get some provisions while Bruce heads up the hill.

On the way back to town I meet David & George from “Nimrod” who tell me to check the dinghy as theirs had been moved and was in danger of being punctured by a metal stake.   I hightail it back to the dock, and discover that, yes, our dinghy has been moved too, over onto the treacherous rocks near the beach. There’s no easy way to get to it except by clambering down a pile of slippery rocks. Luckily two fine young local men offer to retrieve it for me and tell me it was probably on instructions from the restaurant owner’s wife. I guess we won’t be eating at their establishment any time soon. They find a spot to re-tie it for me but I’m loathe to leave it now. I go back to the restaurant, no sign of the owner’s wife, but I tell them the problem and that I’ll just be ½ hour while I go to the supermarket. Meanwhile Bruce has returned so he offers to stay on dinghy-watch while I do the shopping. 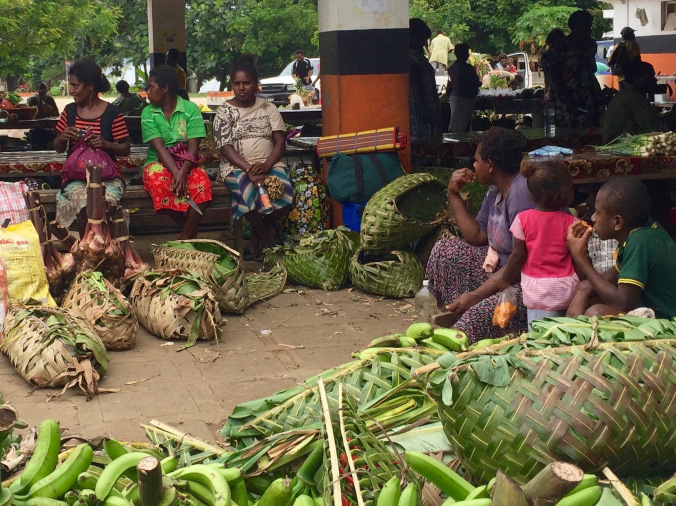 Luganville has changed substantially since the last time we were here almost twenty years ago. The island of Espiritu Santo was home to over 40,000 US troops in WWII (the main street is so wide because the US Commander of the day insisted it should be able to carry 4 tanks abreast). Twenty years ago there were a few small shops, a hotel and very little traffic. Today there’s a decent size supermarket, several telecommunication shops, ATM’s and clothing stores, and hundreds of tiny little taxis. It seems that everyone in Santo is a taxi driver so there’s never any problem getting a cab and the prices are very reasonable (usually). 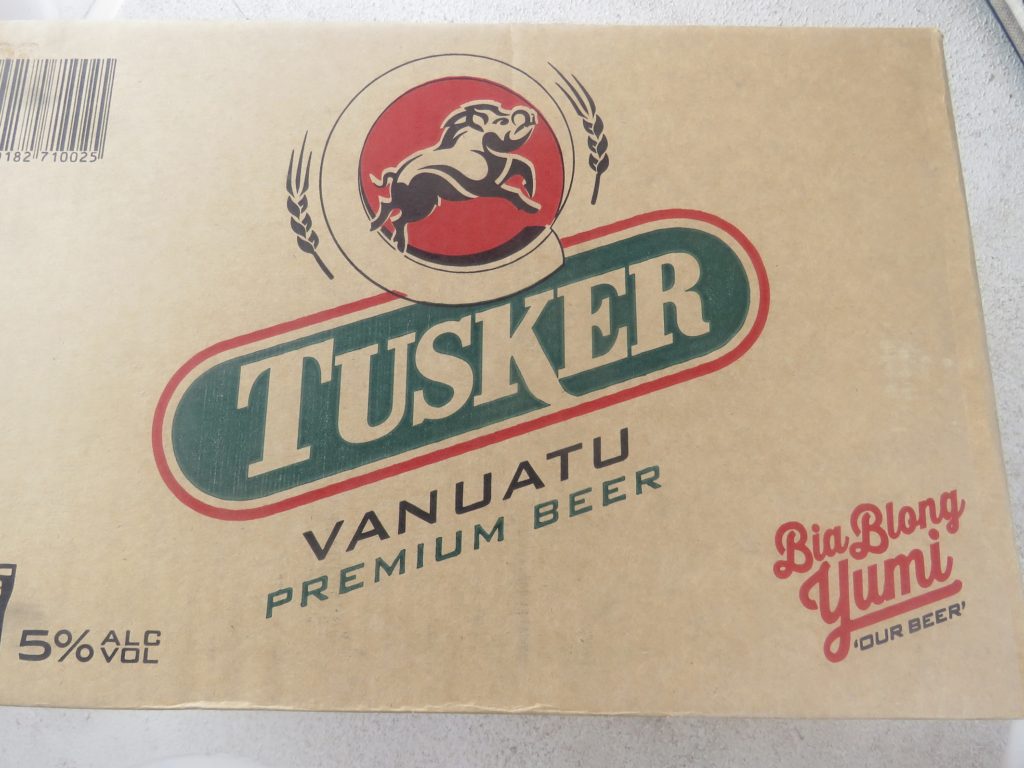 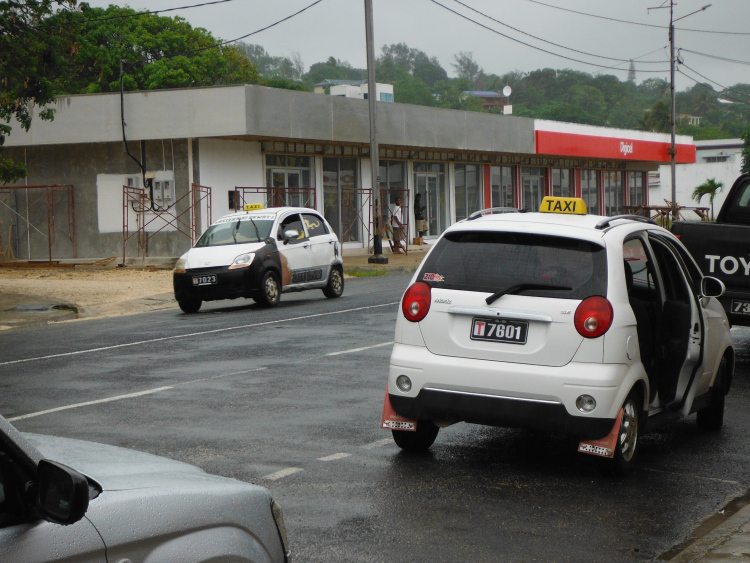 Hundreds of tiny taxis in Luganville (photo courtesy of 4onaboat)

I get a cab back to the dinghy with the provisions but in my befuddled, tired state I can’t work out the local exchange rate so I get charged triple what the normal cab fare would be. I think my mistake was telling him I’d just arrived on a yacht…oh well, c’est la vie! At least now we can get out of here and catch up with our friends on Rehua.

(postscript: for some reason I forgot to take my camera ashore in Luganville, so most of the photos in this blog are courtesy of other cruisers!)