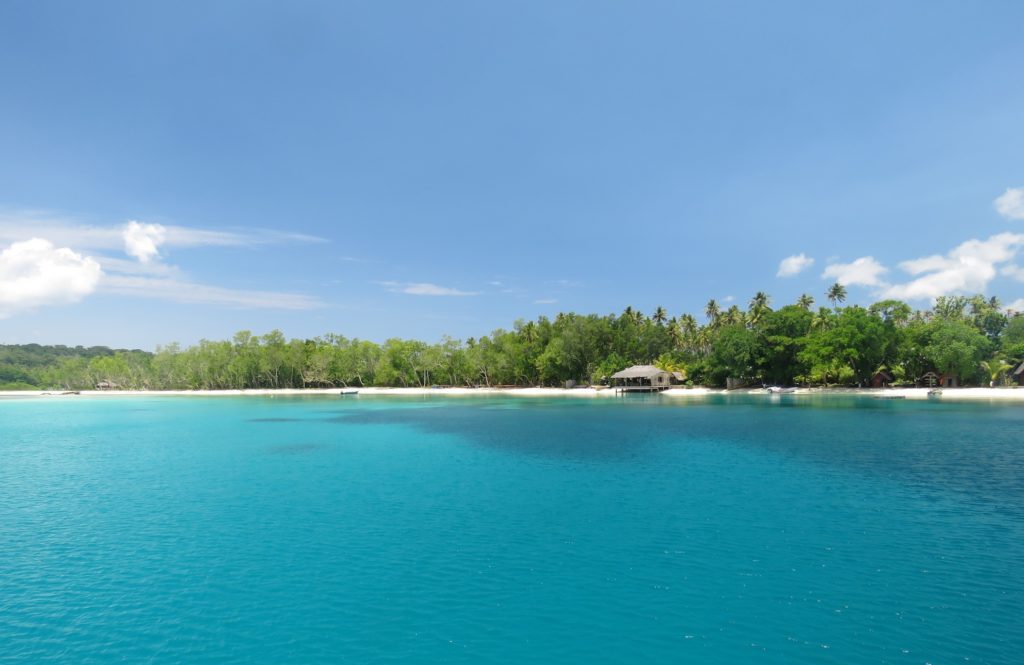 We were keen to get out of Luganville in order to catch up with our cruising buddies on ‘Rehua’ who we hadn’t seen for a couple of months. They were anchored off Ratua island, just a few miles away, and what a stunning location it is for a rendezvous.

We had another surprise in store as we got closer to the island, there in the anchorage were Kerry and Damian from “Sel Citron”, our neighbours from the hardstand in NZ, so it was an extra special reunion with cruising friends. 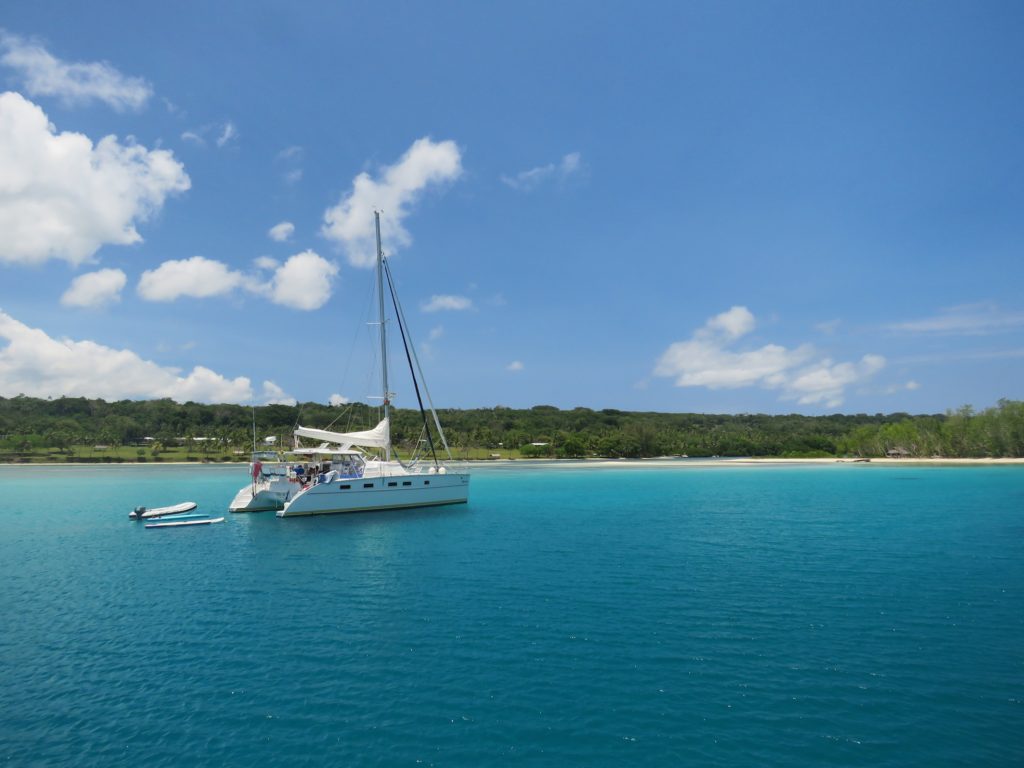 Nice to be anchored next to Rehua again! 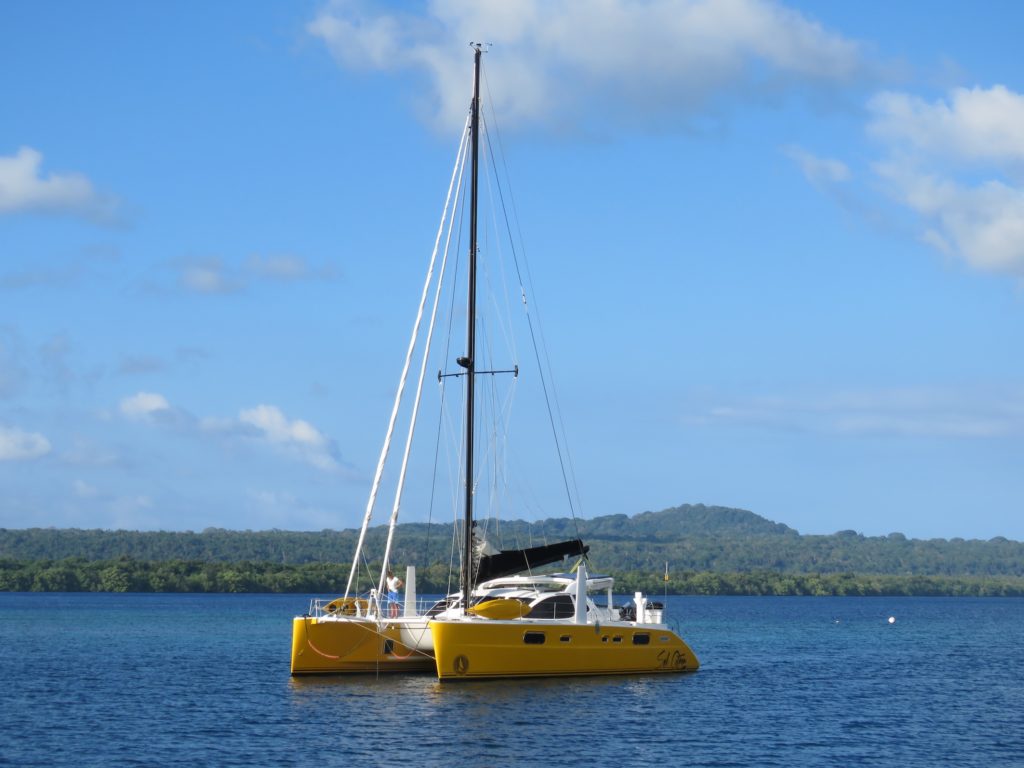 Ratua Private Island is fabulous – leased from the local communities by two former cruisers, they’ve created an eco-friendly and tasteful resort with Balinese-inspired buildings, and the most impressive part is that it’s a not-for-profit venture – all profits go to the local communities for educational, health and cultural projects. What a great idea! 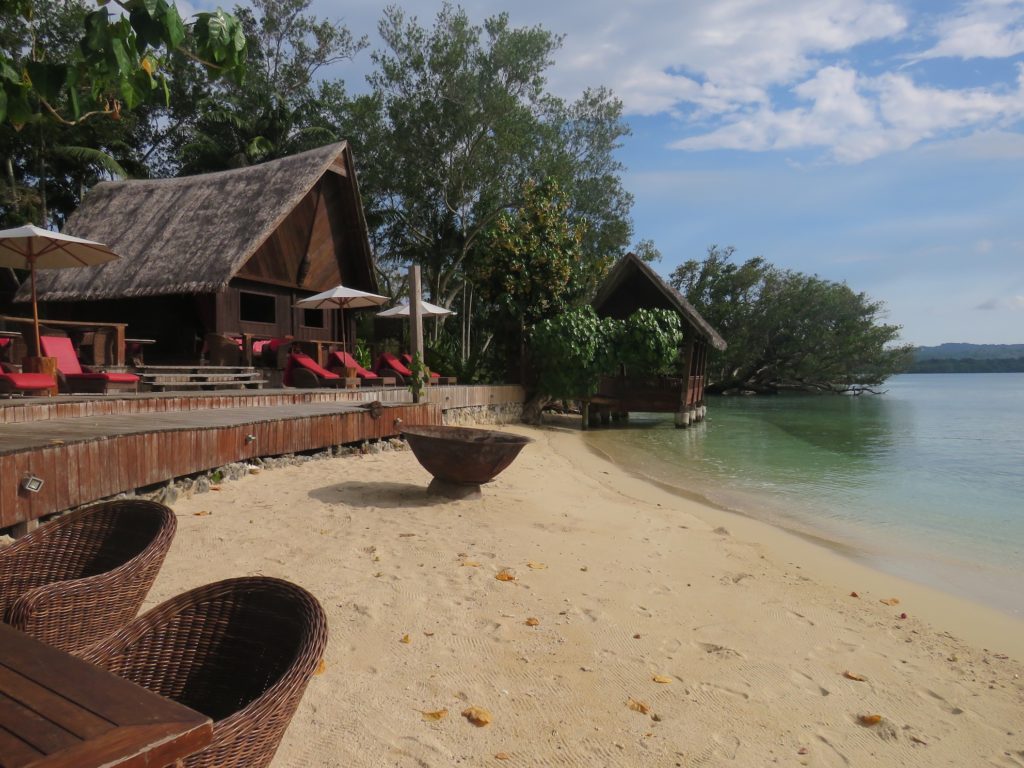 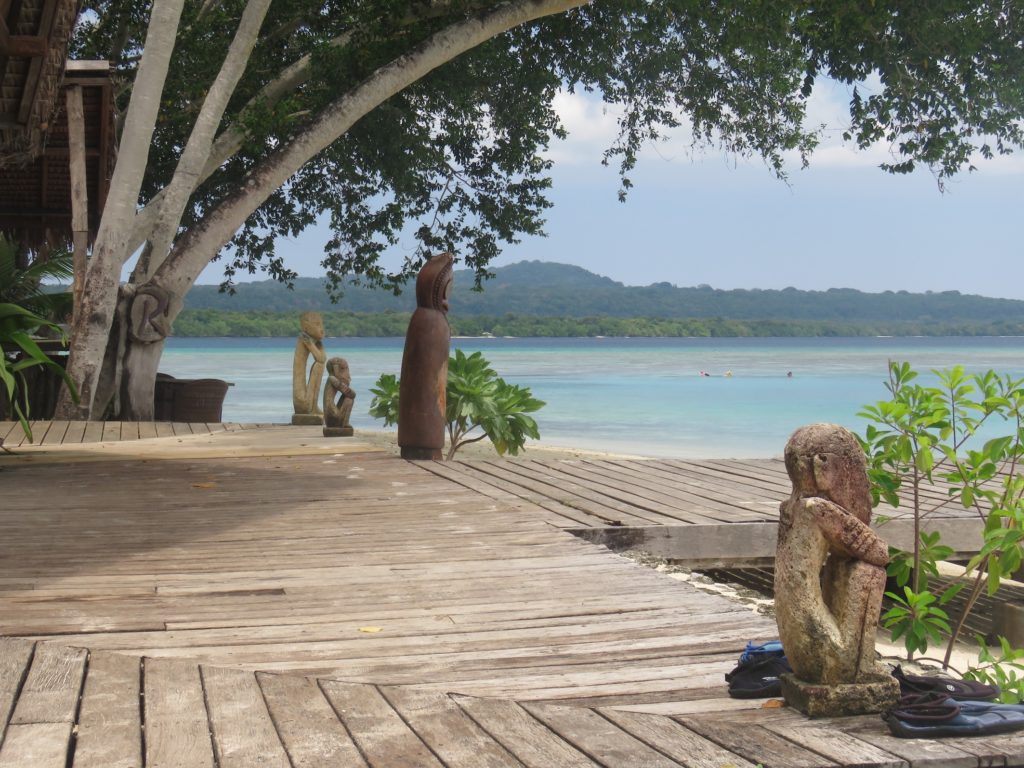 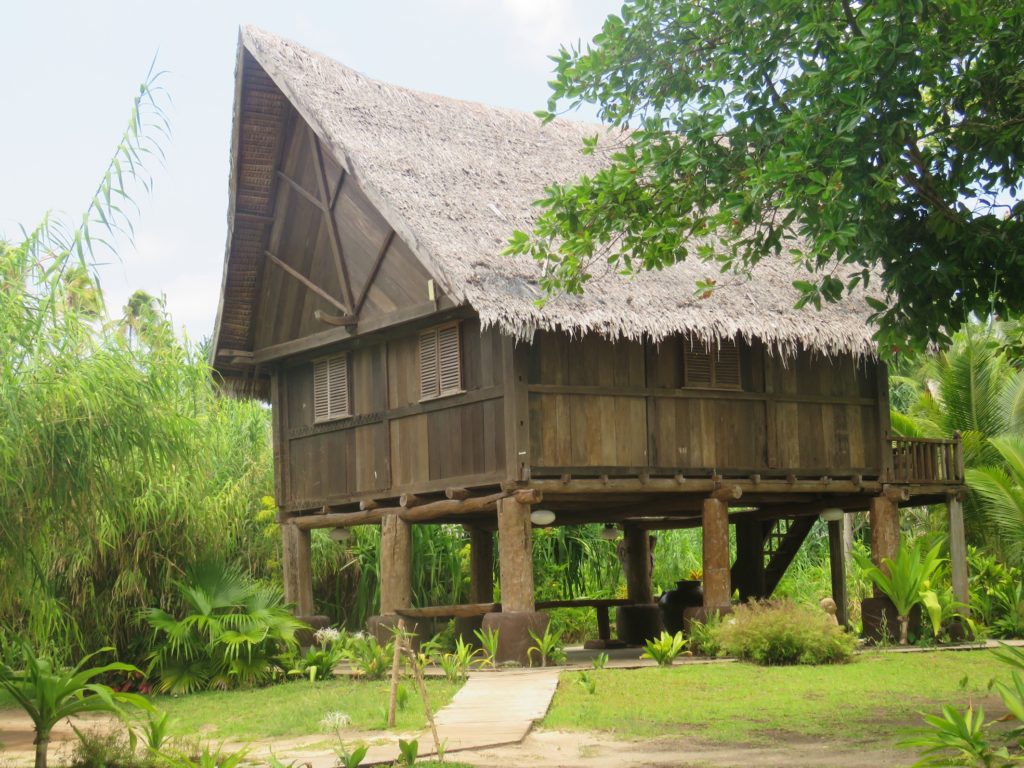 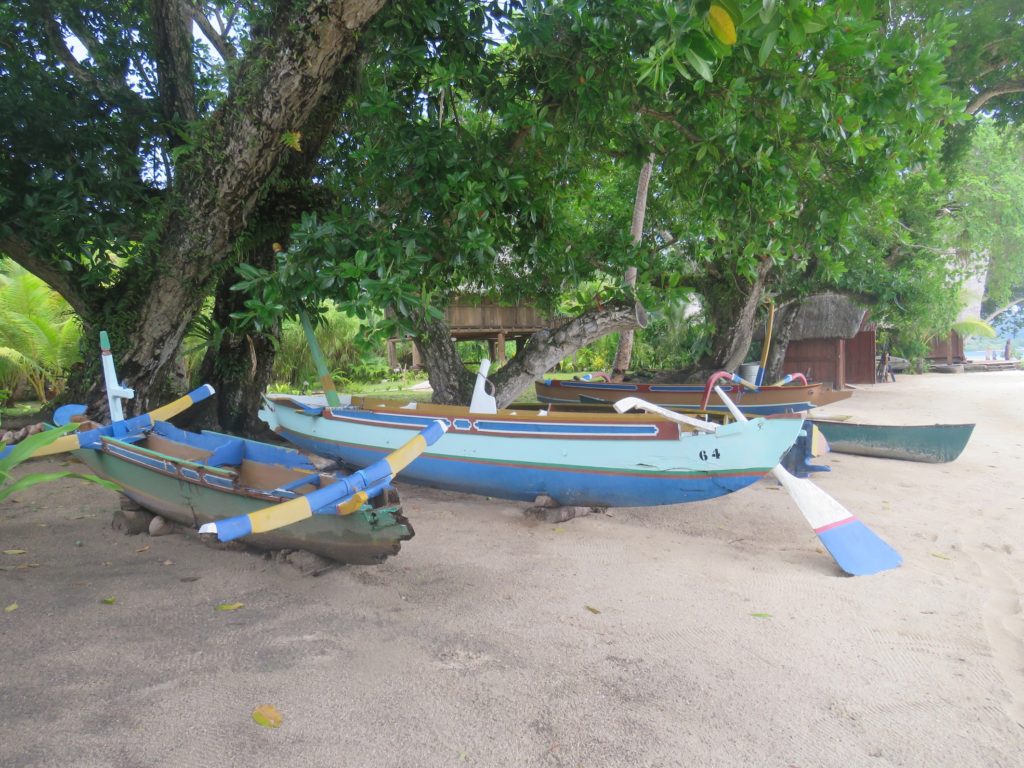 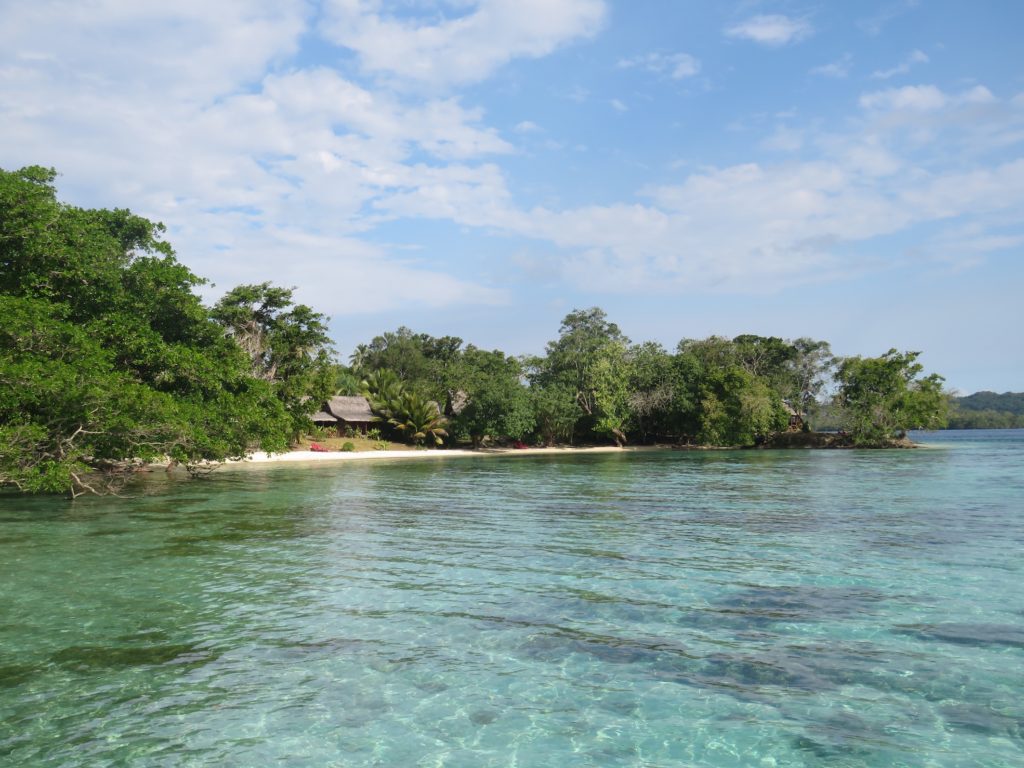 Each bure has it’s own secluded waterfront 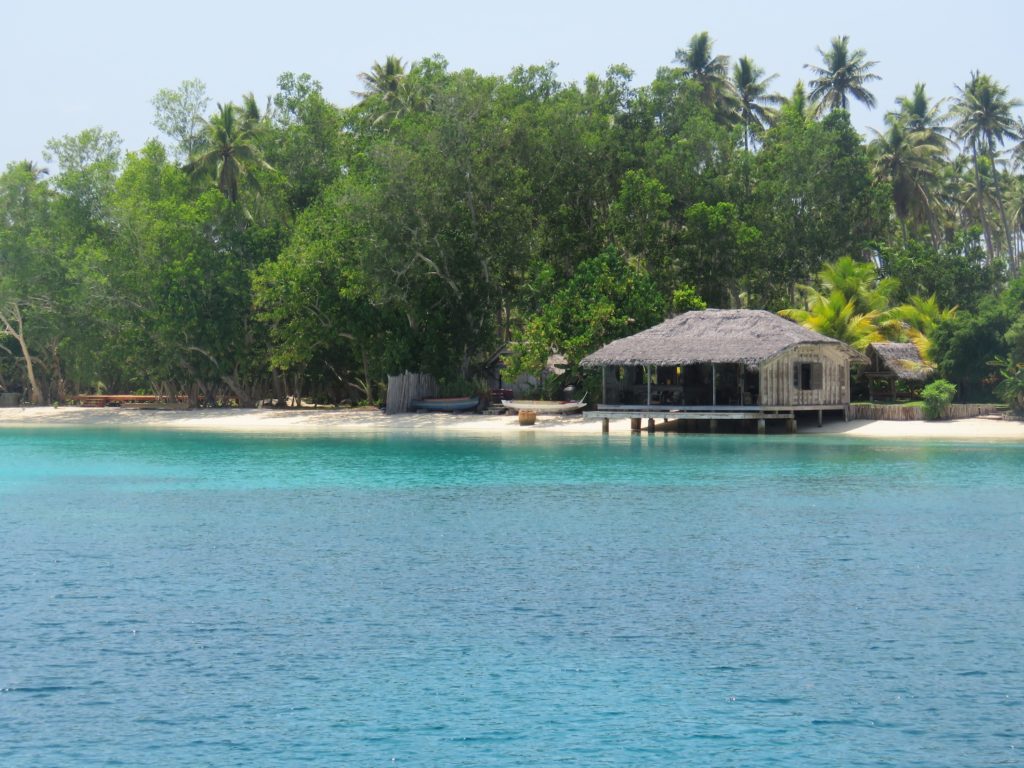 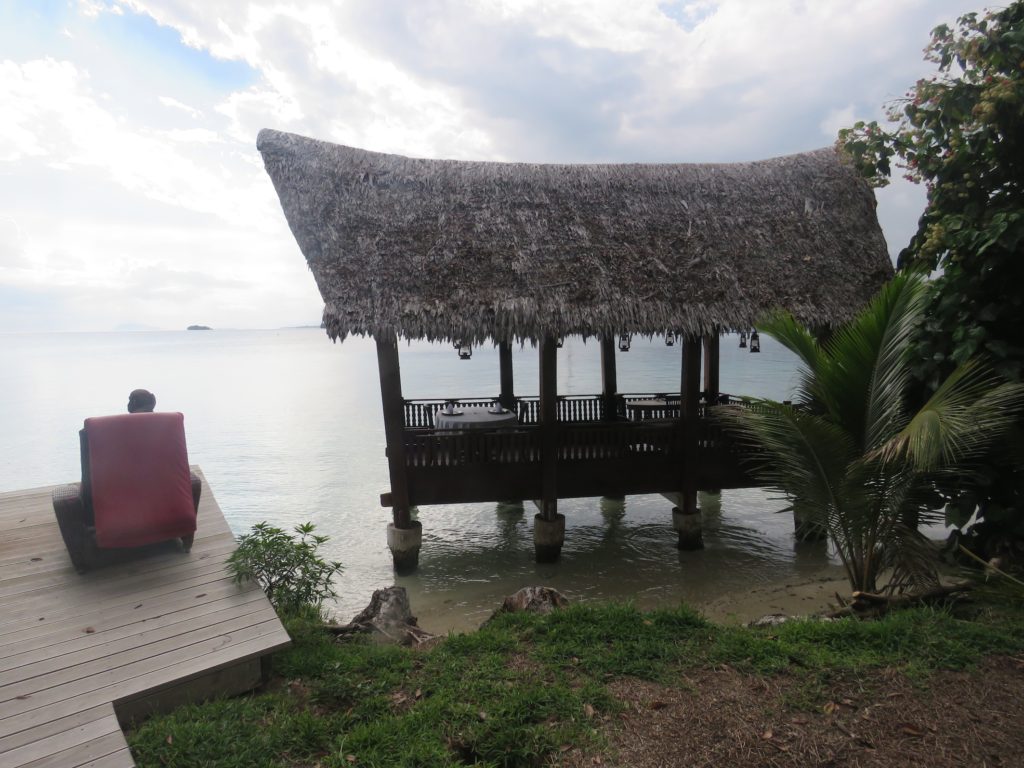 Romantic dining on the waterfront 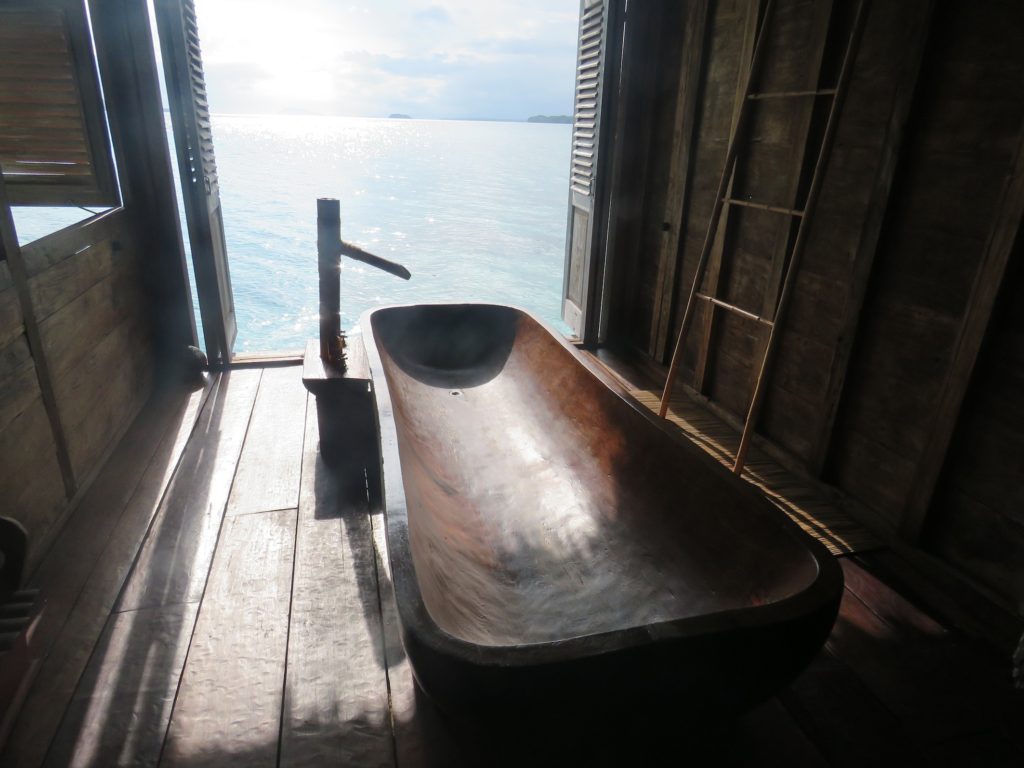 The resort provides two free moorings for visiting yachts or you can easily anchor in the sand in front of the resort – they’re very welcoming to yachties although the food and beverages are pretty pricey for those on a cruising budget. 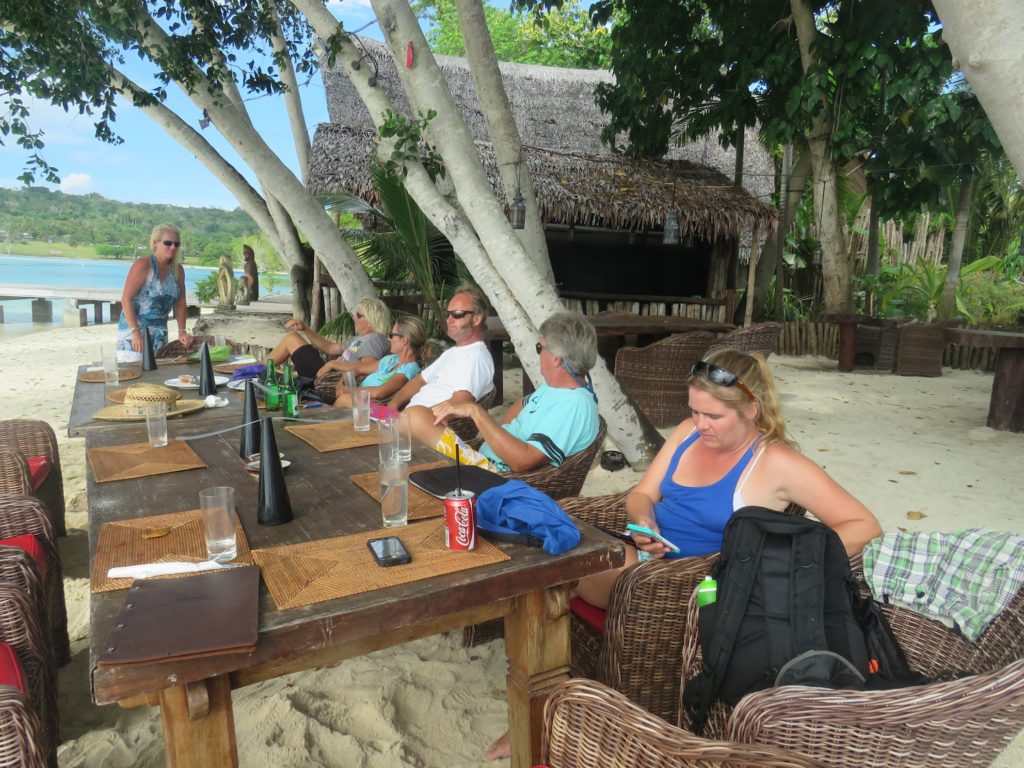 Enjoying a few coldies with our cruising mates

Everyday we snorkeled in the crystal clear water and had encounters with the many resident turtles.

an abundance of fish life and interesting snorkelling

We also walked around the island (it takes about an hour). There are hundreds of goats (and their kids), lots of horses, a grass air strip, and a vast swathes of coconut palms left over from its’ plantation days. It was a little disconcerting walking through the plantation, hearing the loud ‘thump’ as coconuts fell to the ground – getting hit by one of those could ruin your day. 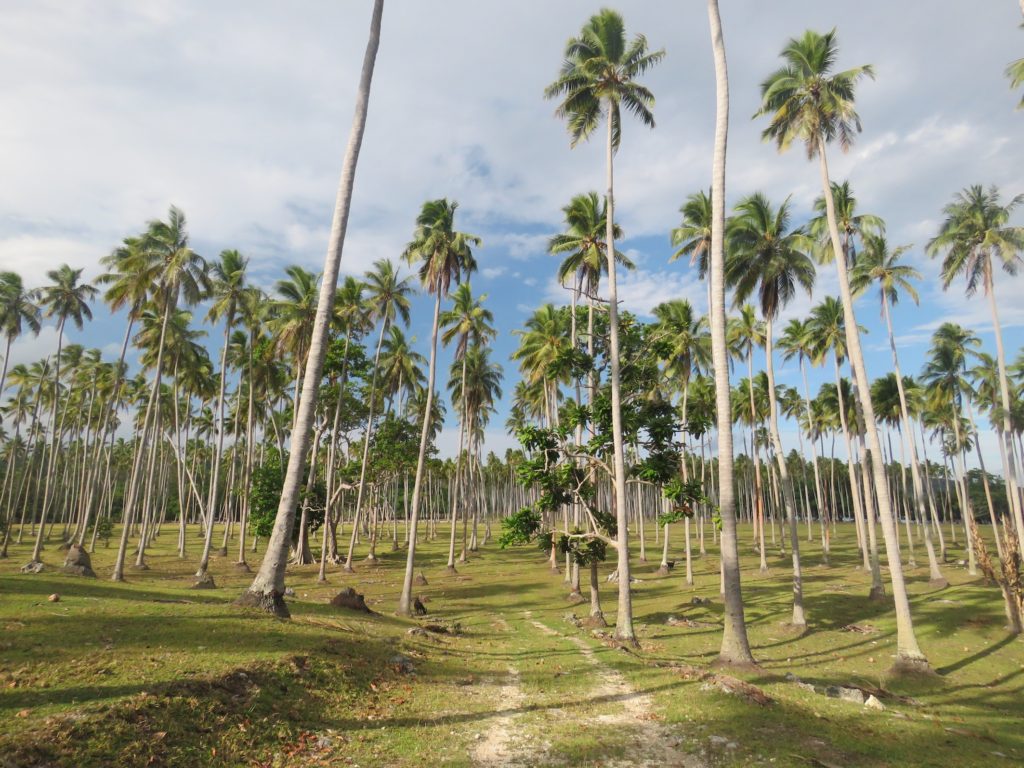 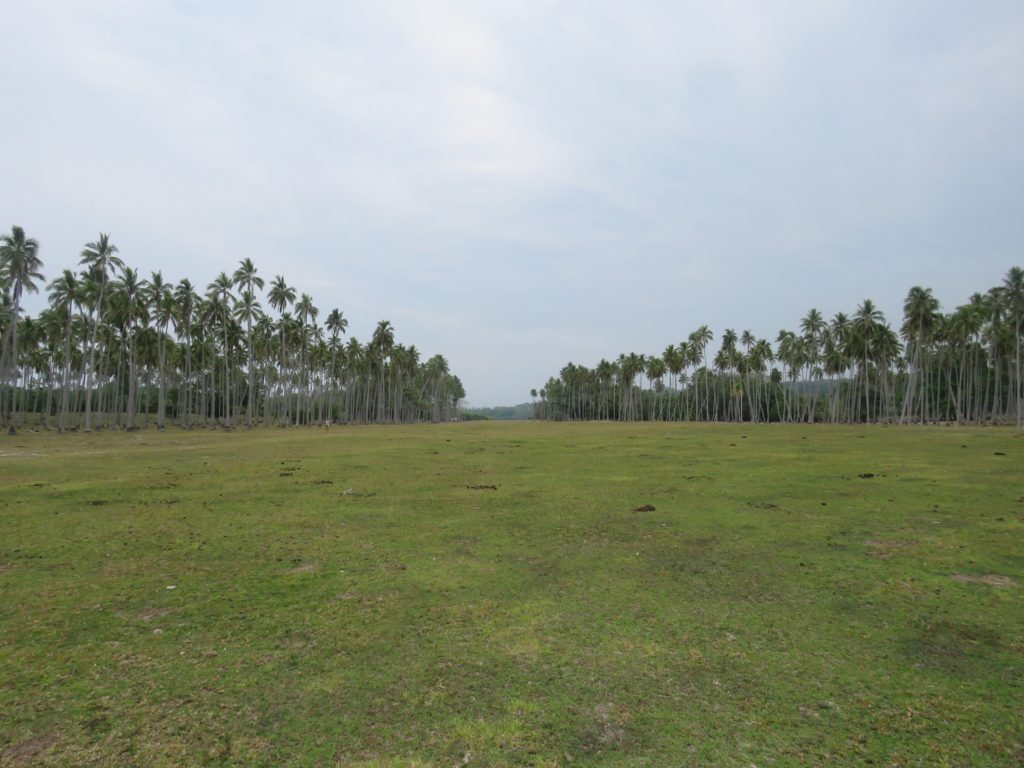 the airstrip on Ratua Island 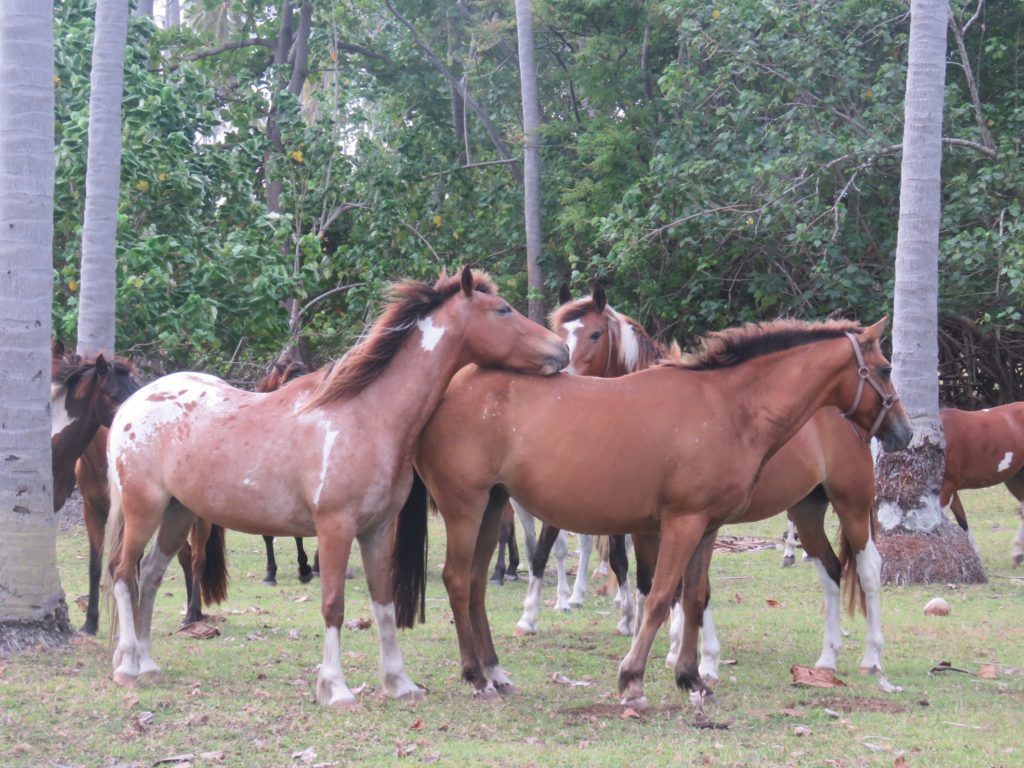 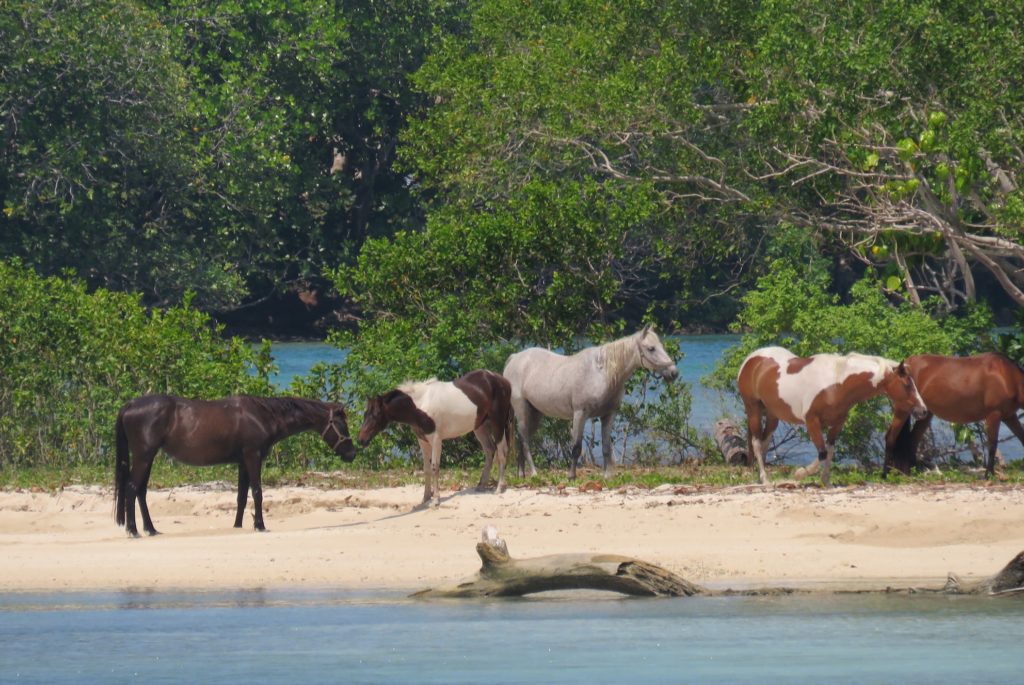 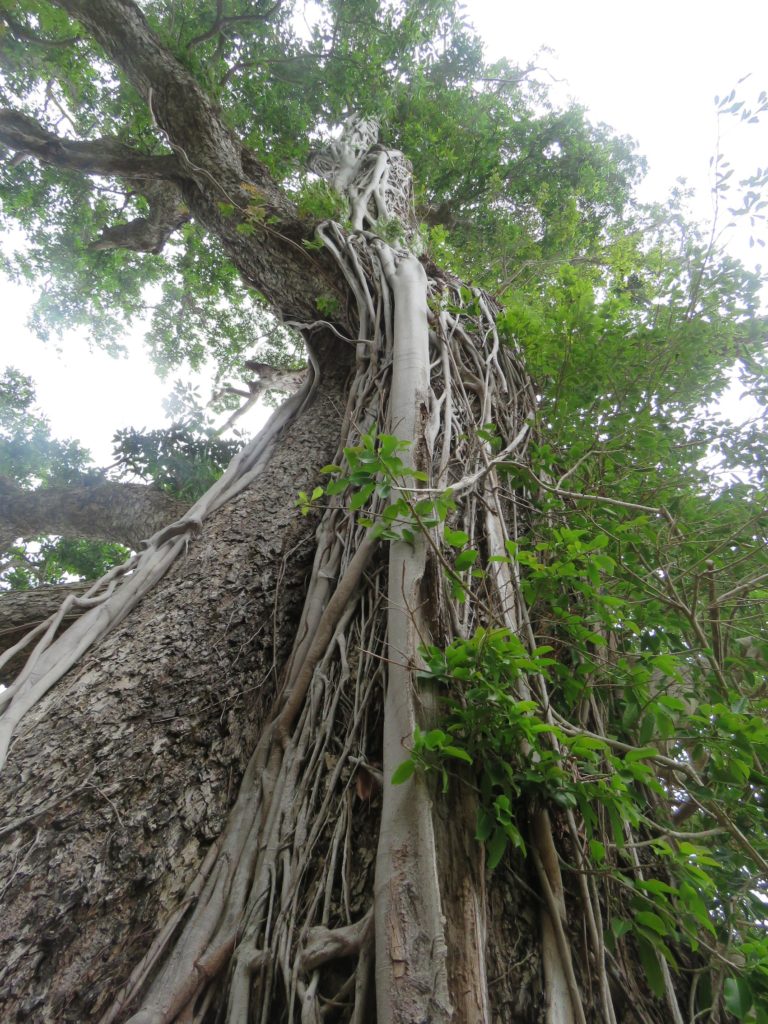 there are also majestic trees on the island 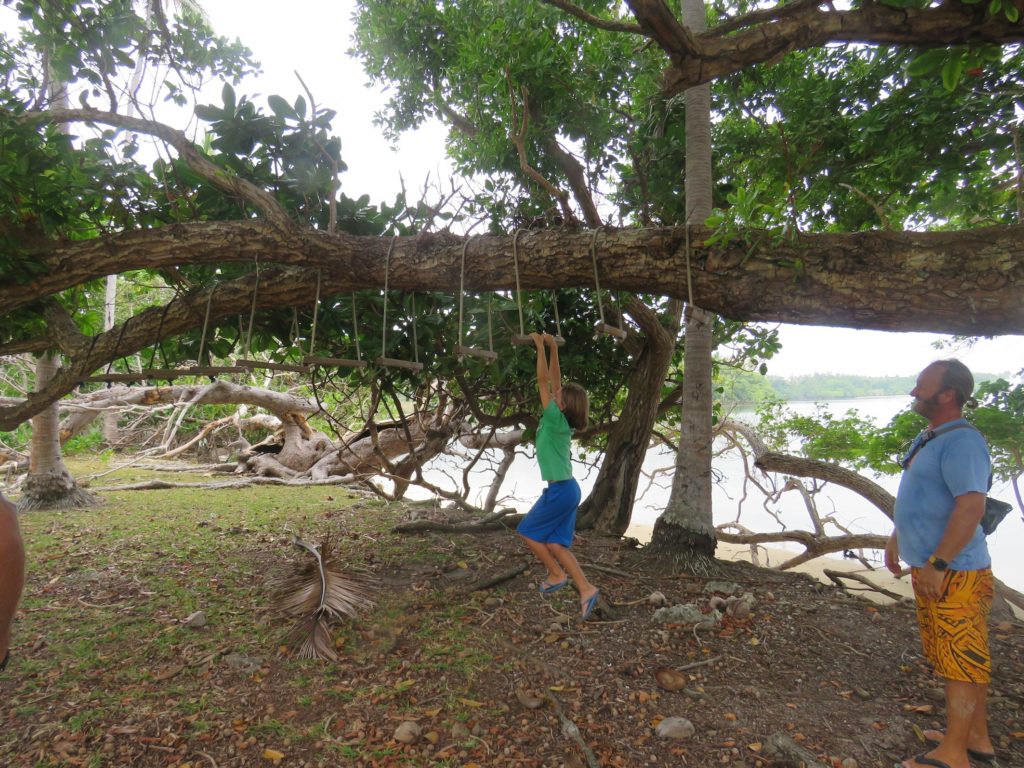 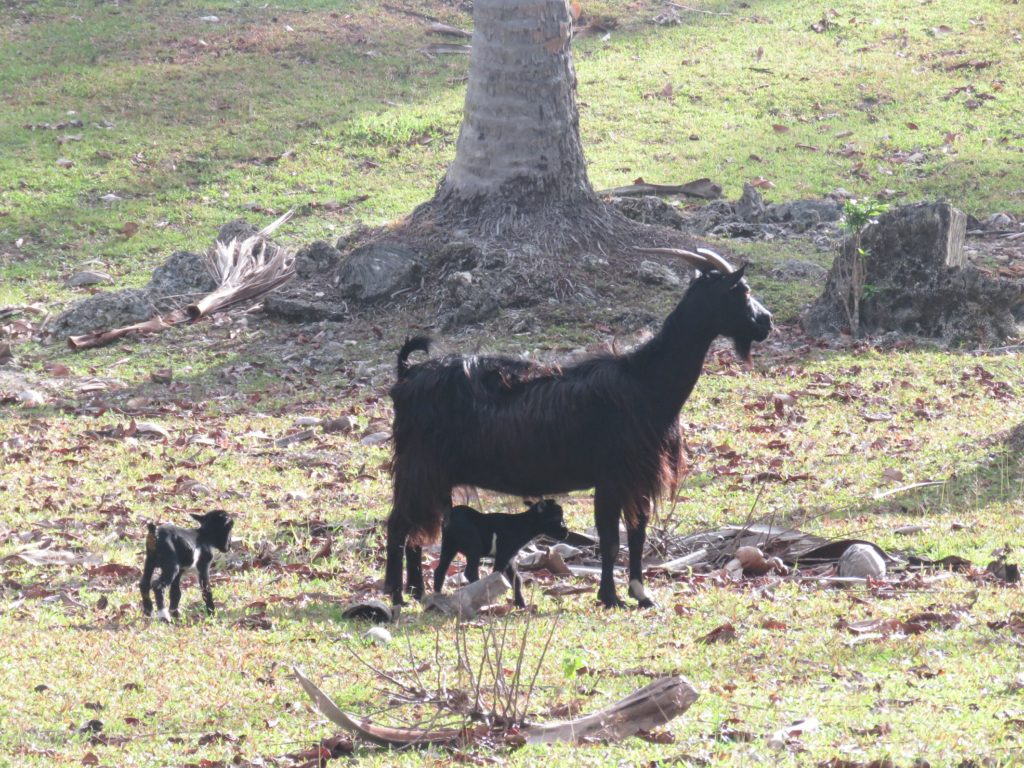 And lots and lots of goats… 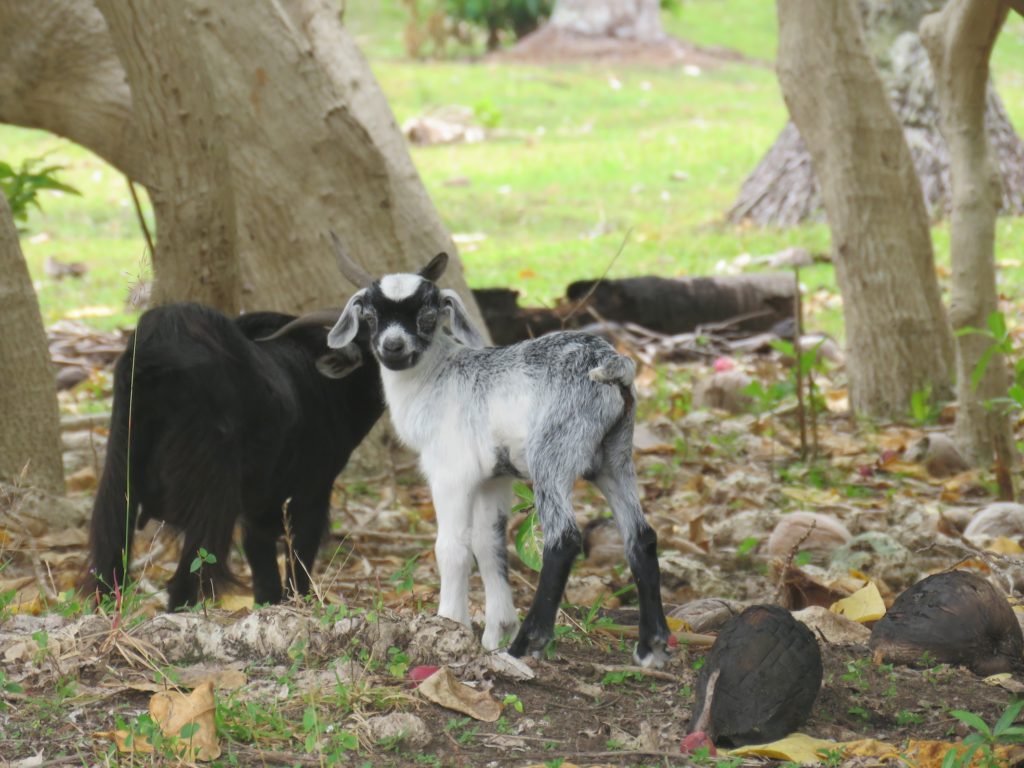 On one of our walks we found a newborn kid that seemed to have either been abandoned by its’ mother or separated from her – we spent a long time searching without luck, so Audrie carried him to a nearby group of mums and babies, hoping they would look after him. He wasn’t anywhere to be seen the next day so hopefully he was reunited with his mum. 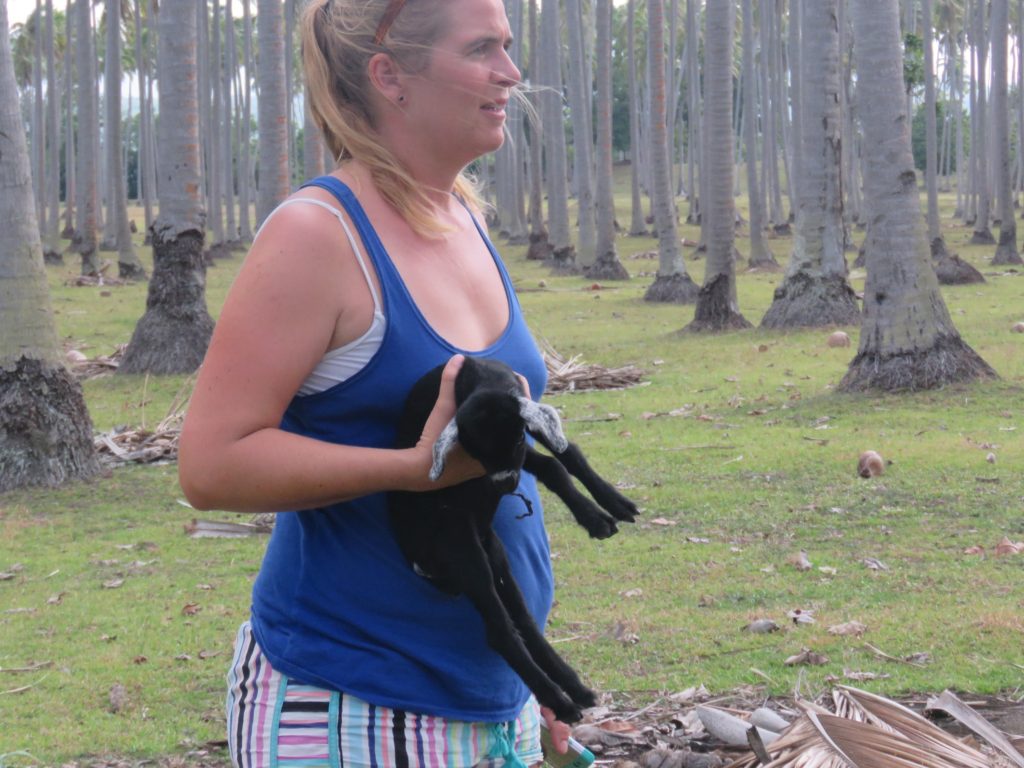 Audrie on a rescue mission for this little baby

A few other boats arrived in the anchorage, so one afternoon we did a cruisers’ tour of the local blue hole – a convoy of dinghies navigating our way up the narrow, shallow creek to find the fresh-water lagoon at the end of it. It was a lot of fun, and there’s nothing like a fresh water swim on a hot day to reinvigorate you. 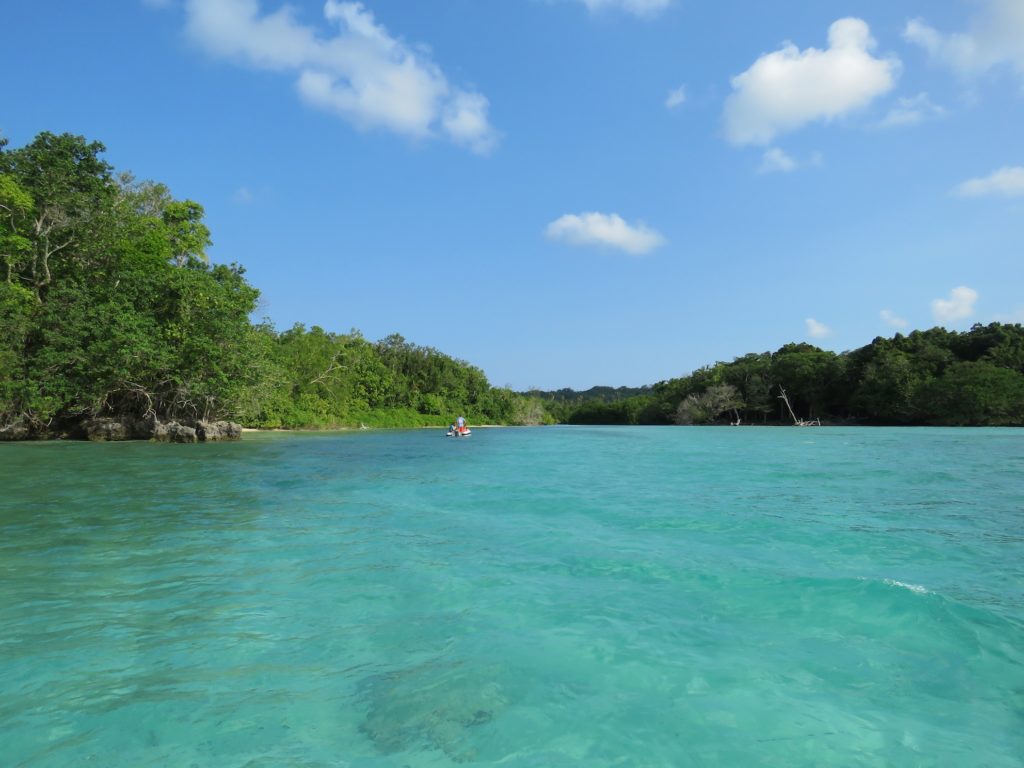 On the way to the blue hole 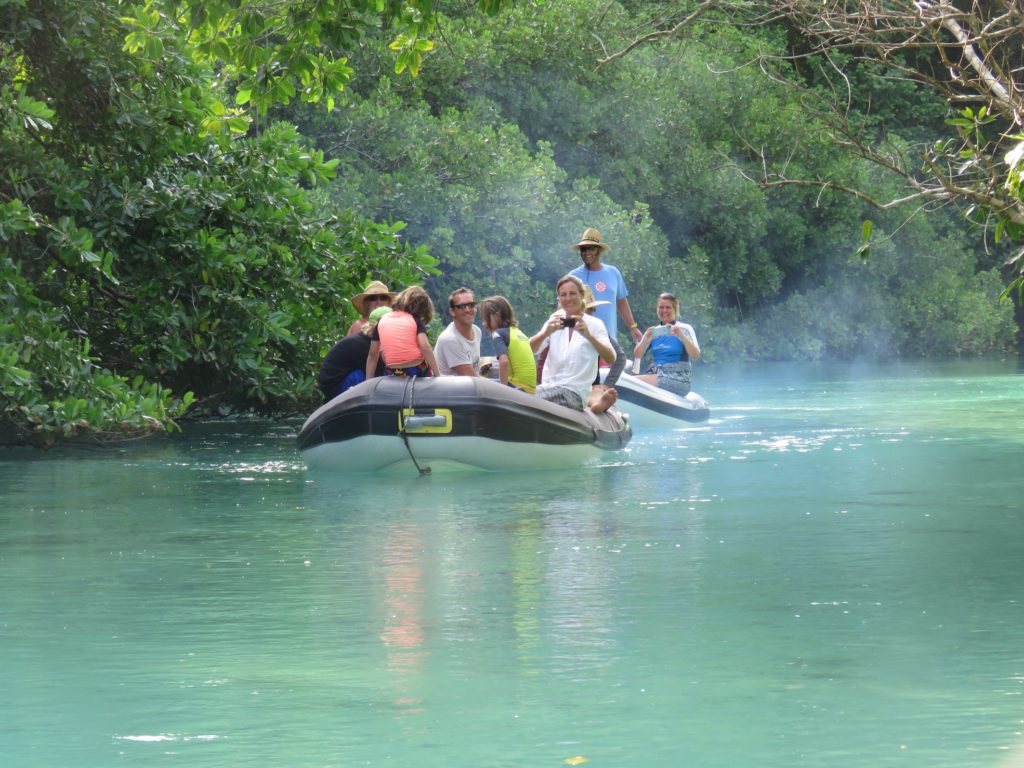 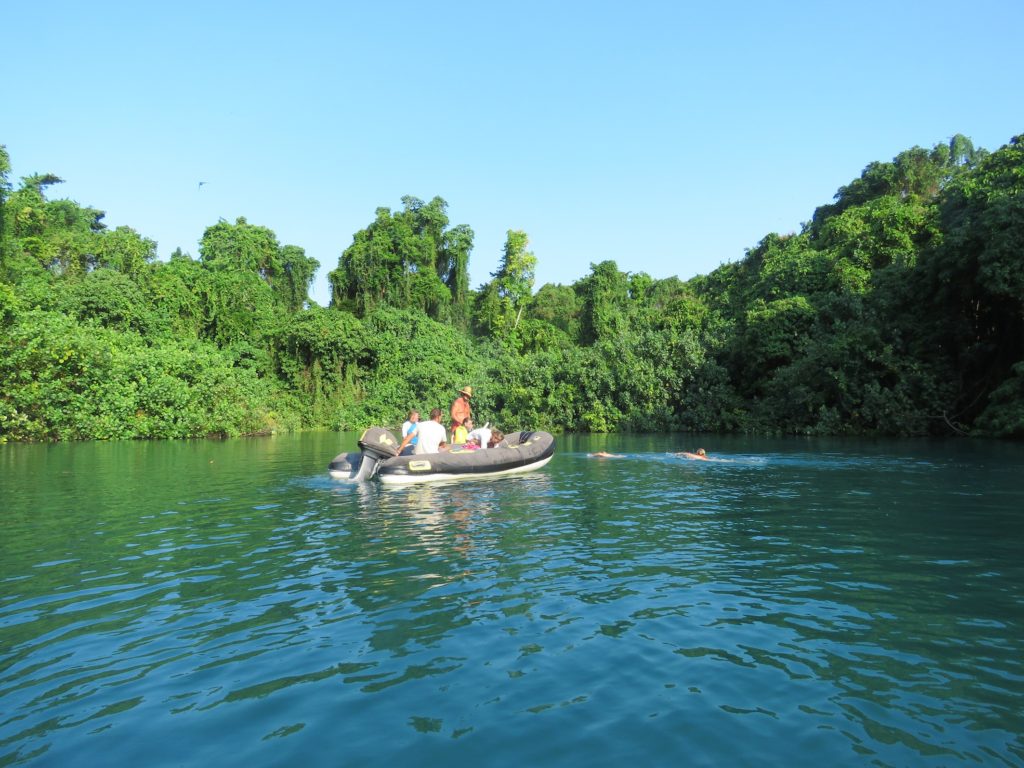 And there it was, the blue hole in the middle of the jungle

Ratua was such a special place that it would have been easy to stay for weeks, but with the cyclone season fast approaching it was time for us to go our separate ways – Rehua are going north into Micronesia, Sel Citron are heading back to New Zealand, and we’re heading home to Sydney via Huon and Chesterfield Reefs. We never know how long it will be before we see each other again, so the farewells are always hard – but as cruisers know it’s never goodbye, just ‘au revoir’. 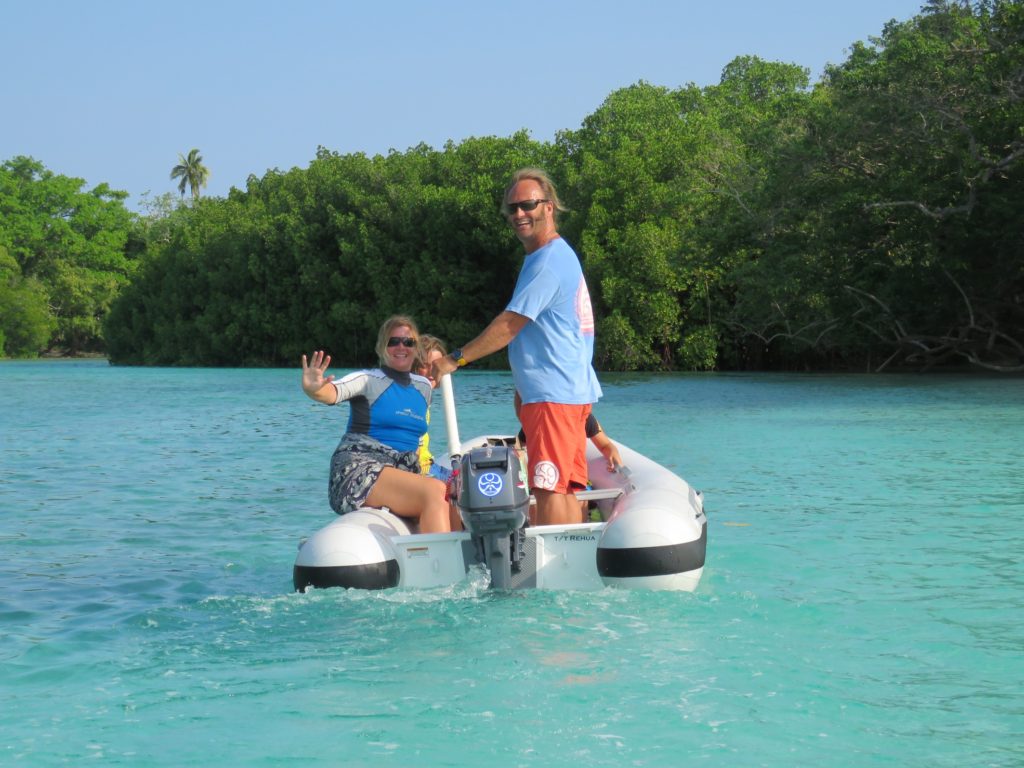 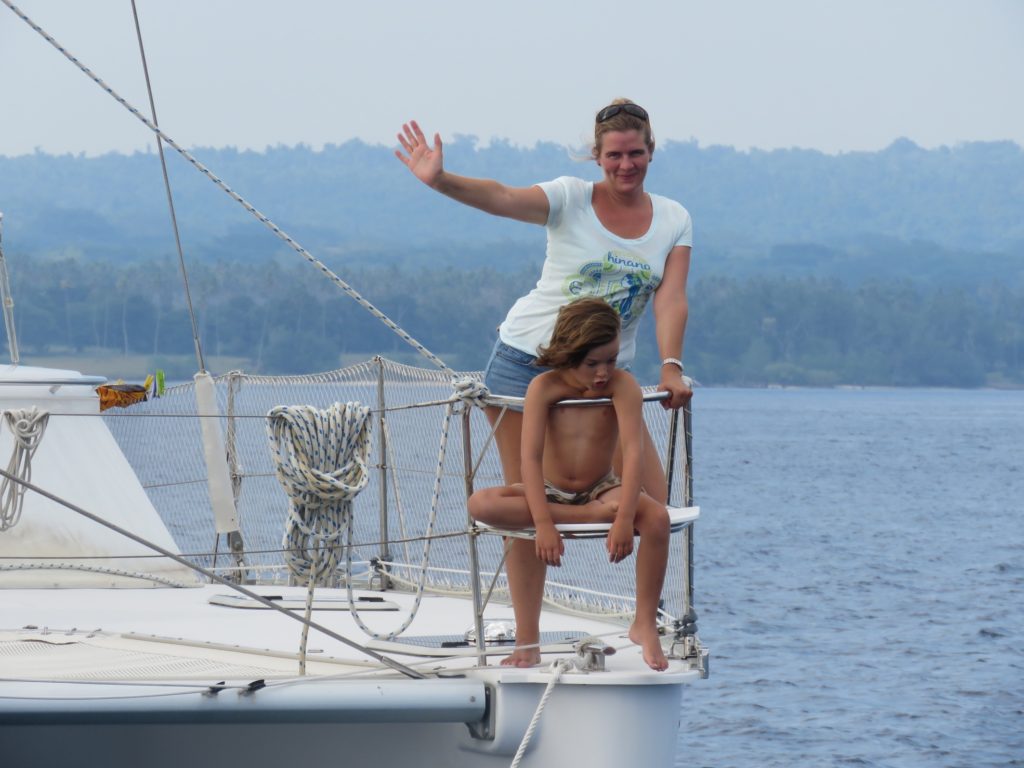 We’re going to miss Audrie, Seathan, Tyrii & Aeneas on Rehua – let’s hope it’s not too long before we see you again

Sadly our time in Vanuatu has been too short and there’s so much more of this beautiful country to explore. It will definitely be on the list to re-visit once we’re back out cruising again.