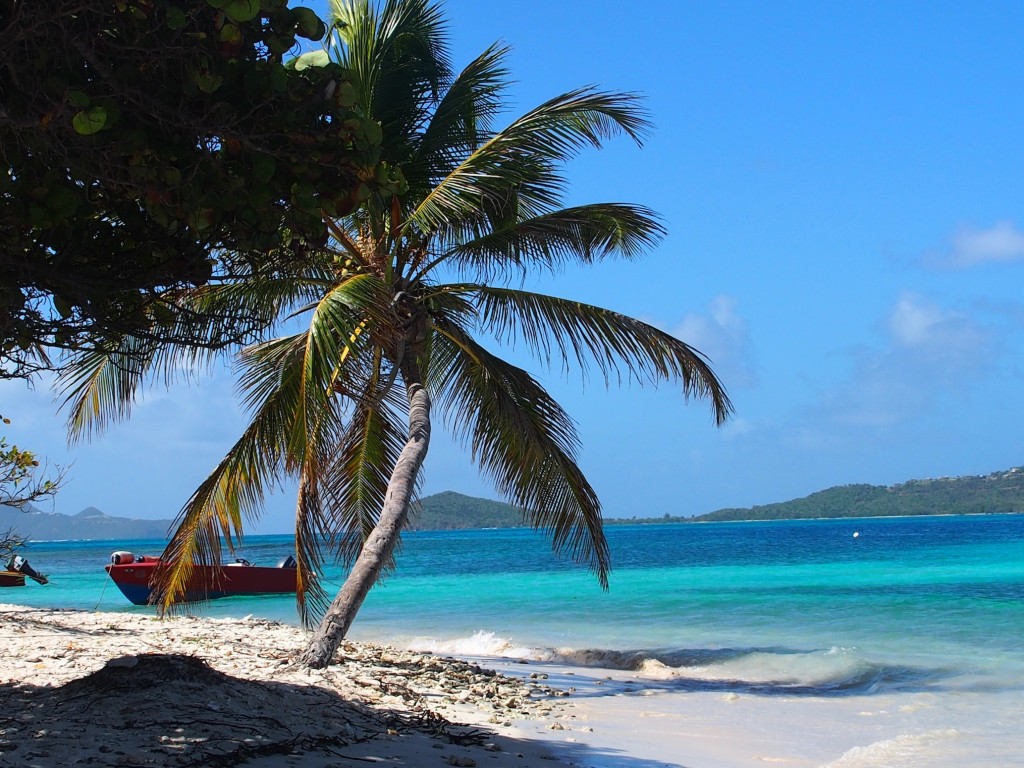 The Southern Grenadine Islands are clustered close together, and are the caribbean islands that dreams are made of – brilliant aquamarine water, white sandy beaches, vibrant green vegetation and about as picture perfect as you can get. But perfection has its’ price….. 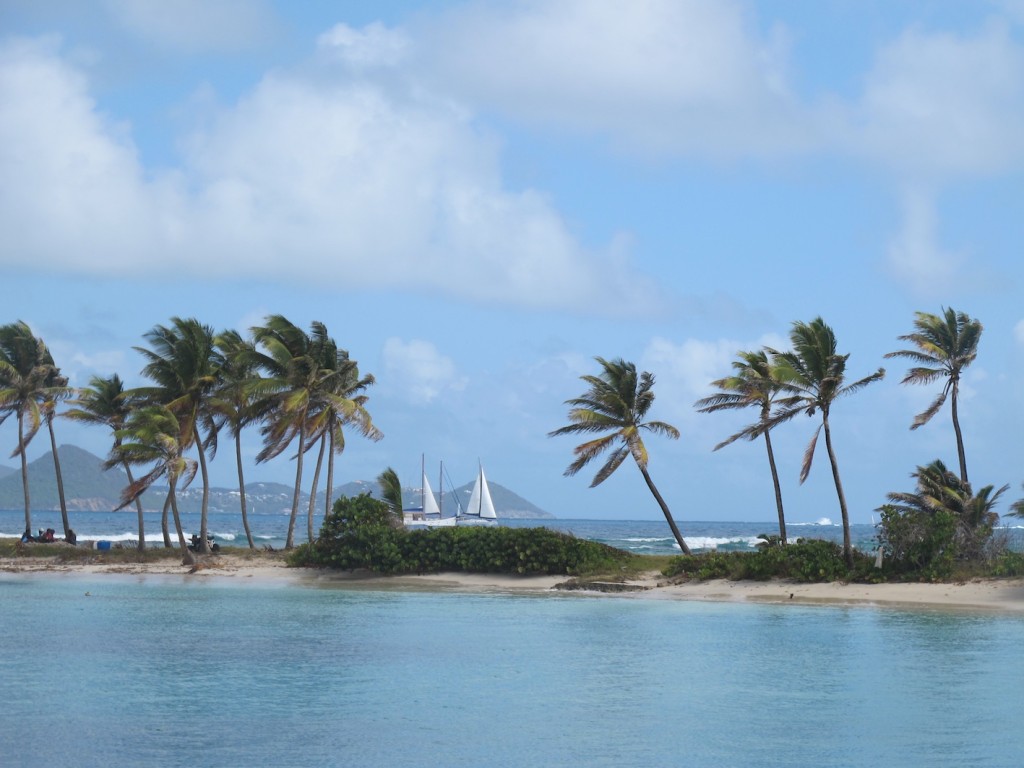 Our first stop was Salt Whistle Bay, Mayreau, a stunning little bay rimmed by white sand and palm trees, with one small resort at one end (again, seemingly deserted), and a beach bar at the other end with the delightful name of ‘Richard’s Last Bar Before The Jungle”. 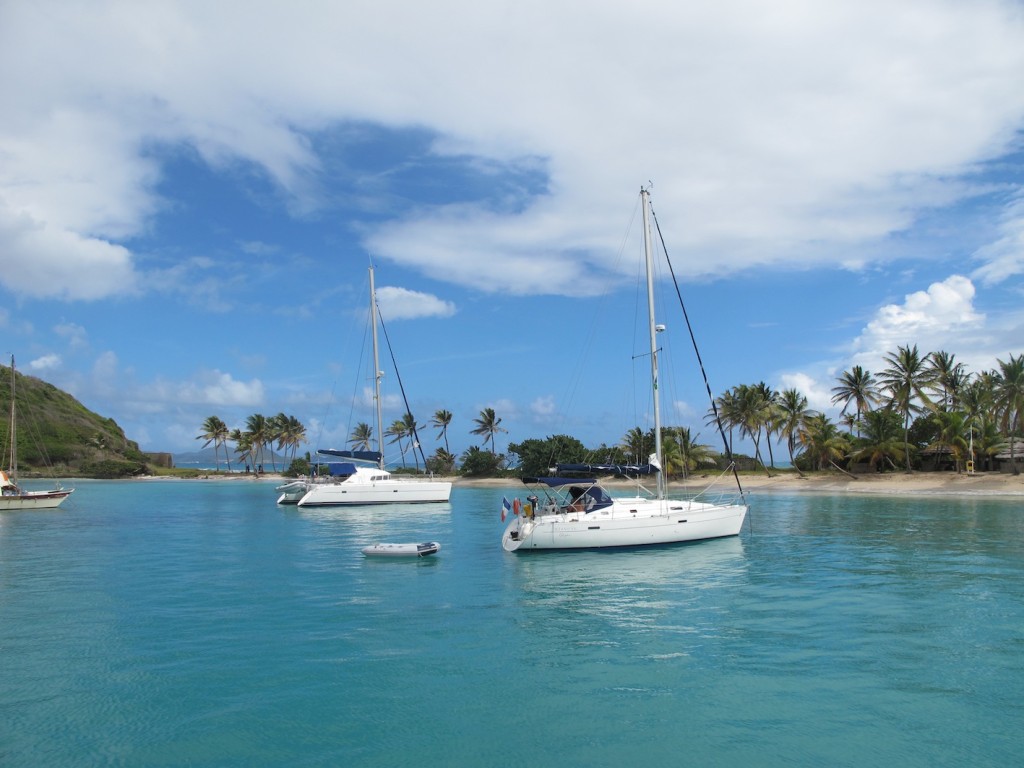 The anchorage in Salt Whistle Bay 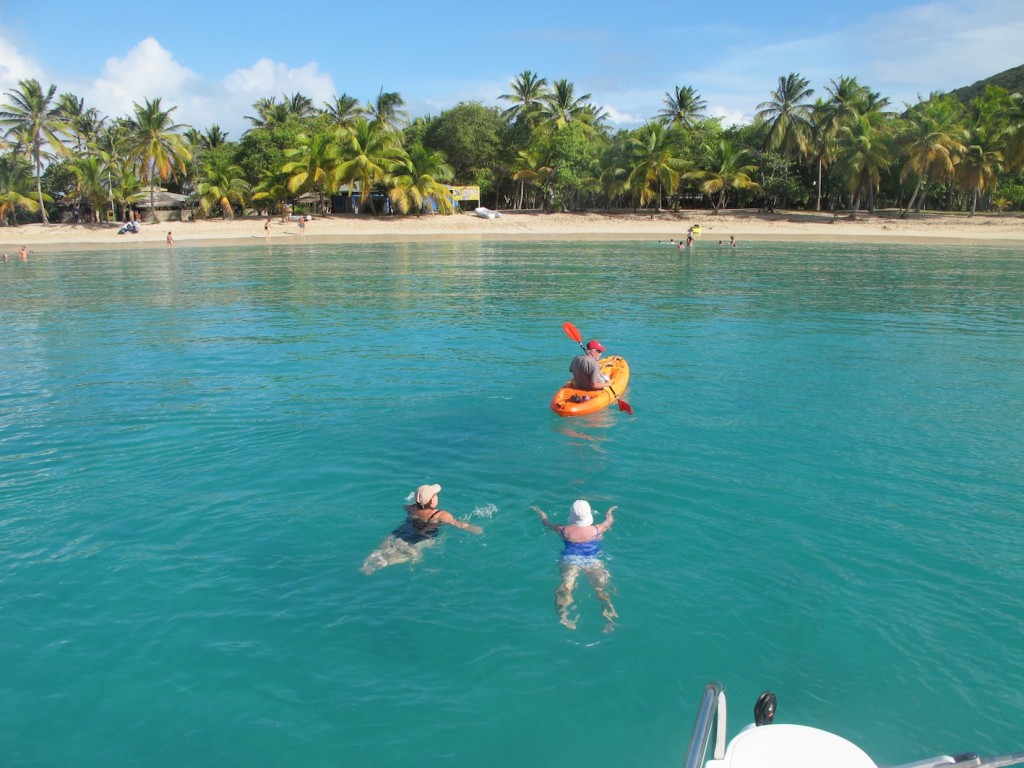 Sherm, Mia and Jackie going ashore – look at that water!

The downside of Salt Whistle Bay is that because it’s so pretty it’s also very popular. We arrived mid-morning when there were only a handful of boats but as the day progressed more and more yachts arrived, squeezing into impossibly small spots until the place resembled Sydney Harbour on New Year’s Eve. We’d decided to anchor rather than pick up a mooring as the cruising guide indicated the moorings weren’t reliable or legal. Of course, this didn’t stop the boat boys touting for business and putting boats on moorings that were clearly unsuitable. At first we watched in amusement as boats jostled for positions, and then in consternation when it became clear they were way too close for comfort. Bruce tried to argue the toss with a boat boy who was intent on putting a boat on a mooring right on our stern. The boat boy was keen to get his money, and as many of you know, diplomacy is not Bruce’s strong suit, so it was inevitable that an exchange of words followed, ending with a veiled threat from the boat boy that we should leave. In hindsight we should have done just that, but instead we spent an uncomfortable night with Bruce and Sherm doing deck patrol to ensure our dinghy wasn’t vandalised or our snubber lines cut. We breathed a sigh of relief in the morning when all was well, but it wasn’t until we’d left the anchorage that we discovered that Bruce’s wallet (which was sitting on the chart table) had been emptied of cash and the loose change we’d had in a bag next to it was also gone. We can only conclude that while Bruce or Sherm were up on the front deck or on toilet break someone who had been casing the boat stealthily (and brazenly) boarded us. As we mentioned in a previous post, we always lock the cockpit door at night, but because the boys were in and out patrolling on deck it was the one night the door was left open. It seems too much of a coincidence given the events earlier in the day, so we can only assume it was payback. Cleverly, our thief hadn’t taken the whole wallet which would have alerted us to the theft much sooner. It was only when Bruce tried to pay for something at our next destination that he discovered the loss. Thankfully it was only a few dollars but still an unpleasant and scary feeling to know that someone had been aboard without any of us knowing. I guess Bruce learnt the valuable lesson that it doesn’t pay to argue with the locals….. 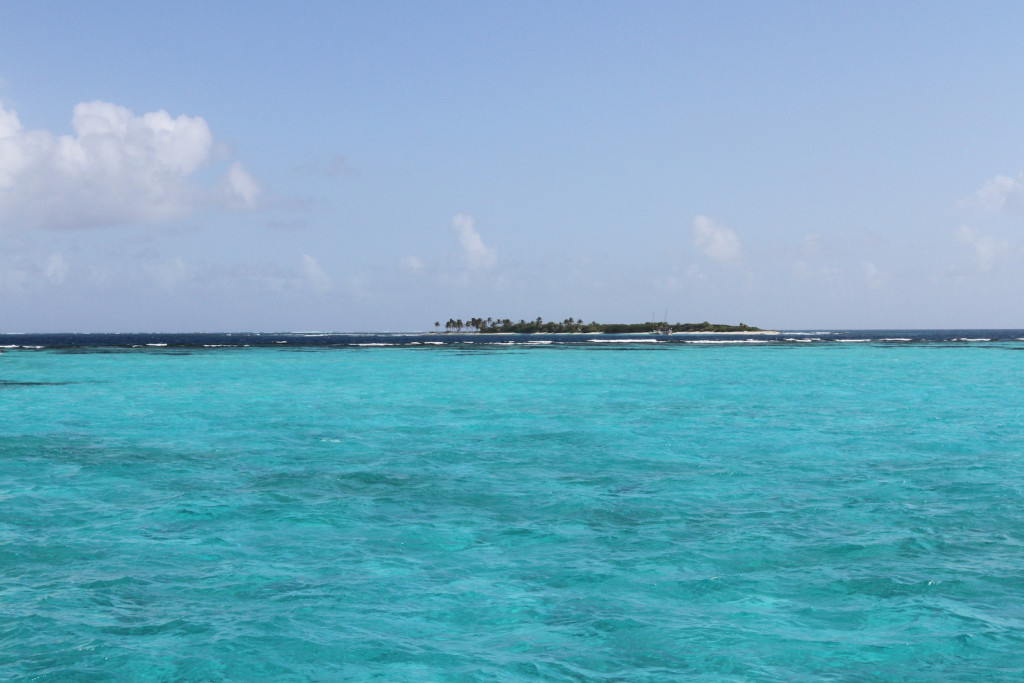 The reef at Tobago Cays, looking out at Petit Tabac Island

The next morning we motored round the top of Mayreau Island and over to the famous Tobago Cays, a very short half-hour trip. The Tobago Cays are a group of small uninhabited islands surrounded by extensive reefs, so good visibility and careful eyeball navigation are essential. It was quite bizarre to be anchored in the ocean with only a bit of reef between us and the rest of the Atlantic! 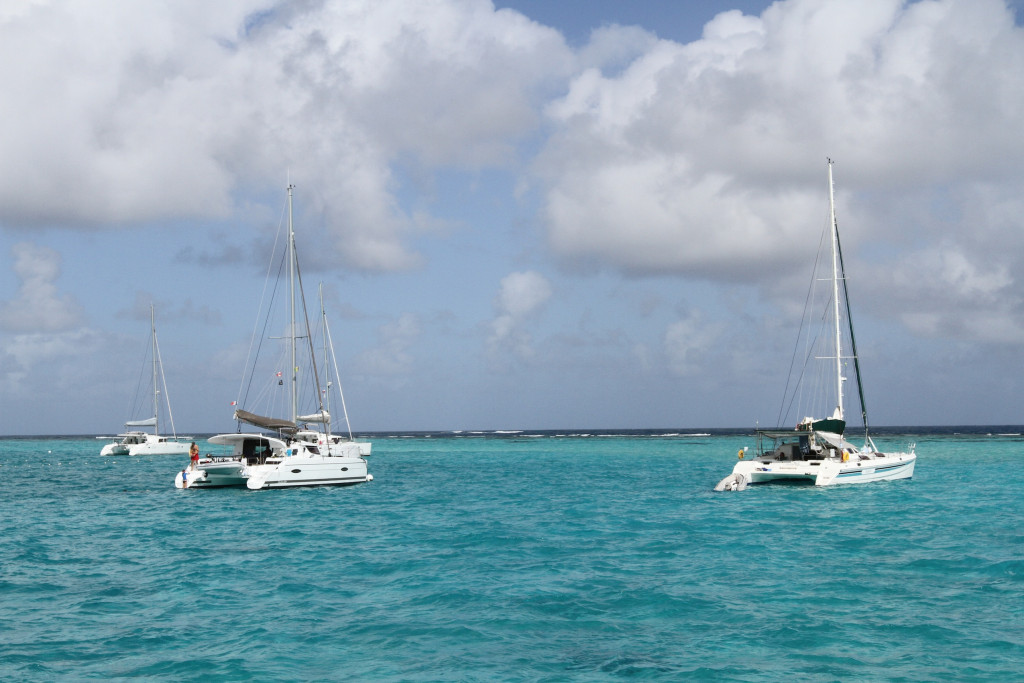 Only the reef between us and the Atlantic!

The whole area is a marine park, with a turtle sanctuary cordoned off around Baradel Island. Although we saw turtles, the underwater visibility was not very good due to the surge, and there was a fair bit of current running around the ends of the islands. Even so, it was a spectacular place to visit, but again very popular with European cruising and charter yachts. (As resident psychologist on board I’ve been on standby to provide trauma counseling for our female crew faced with yet another naked, paunchy European man having a deck shower (or worse) off the back of his boat. Funnily enough, the blokes don’t seem to require the same sort of counselling for the naked European women they see?!) 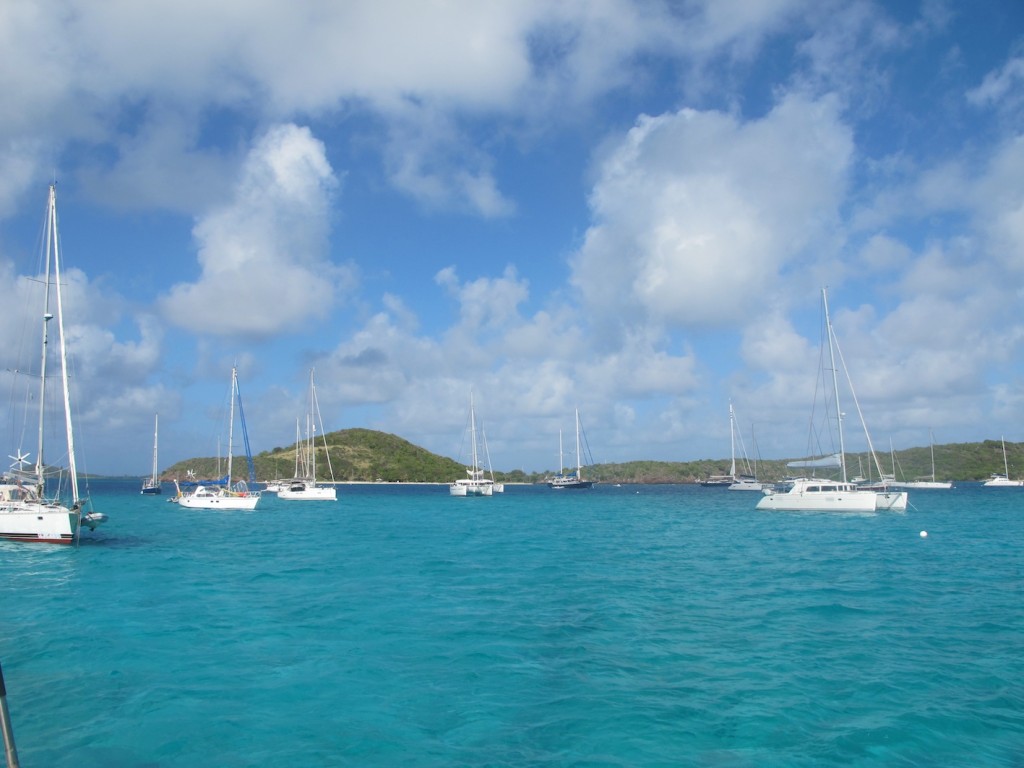 Another shot of the anchorage at Tobago Cays

Although the cays are uninhabited, the anchorage is serviced by boat boys from surrounding islands, offering fresh baguettes, fish, and beach barbeques. We decided to treat ourselves to a beach BBQ with lobster, and what a great decision it was! Our boat boy, “Mandy Man” otherwise known as Neil (go figure?), collected us from Toucan and delivered us to the beach where a whole mobile community of locals had set up tables and chairs and BBQ stalls. The freshly caught lobsters were delivered to the beach by the fisherman, and then the cooking began. We must have done something right, because we seemed to get the pick of the largest lobsters available, accompanied by fried rice, plantain fritters and fresh fruit for dessert. What a feast! Truly a memorable experience and not to be missed if you’re ever fortunate enough to visit this part of the world. 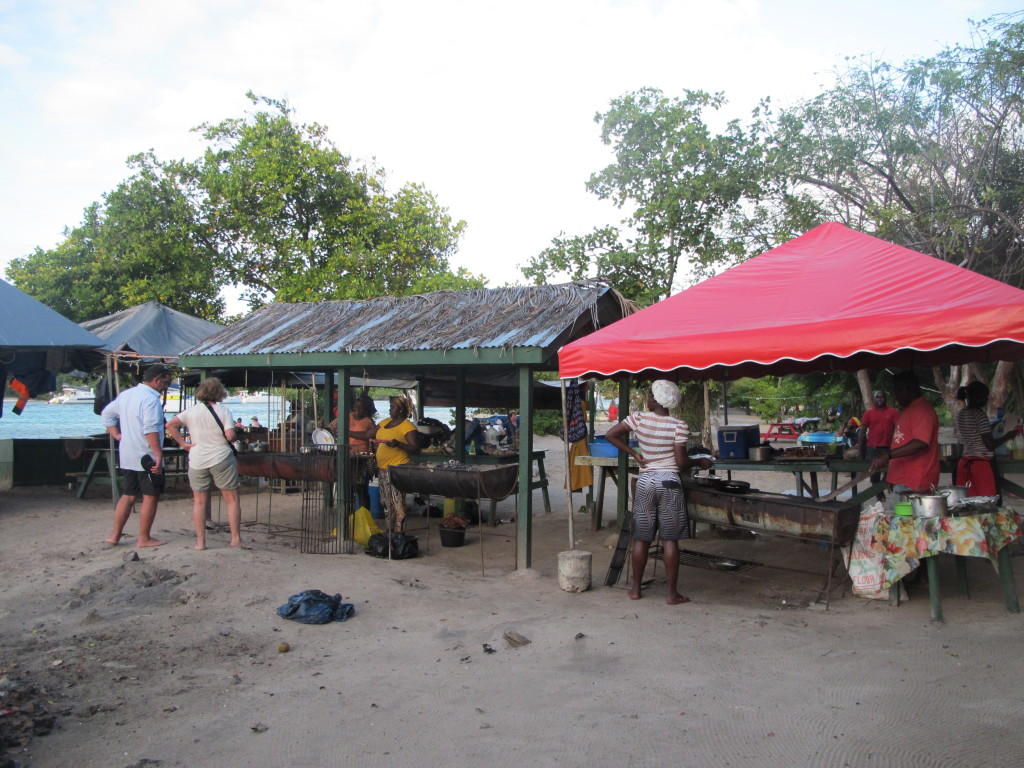 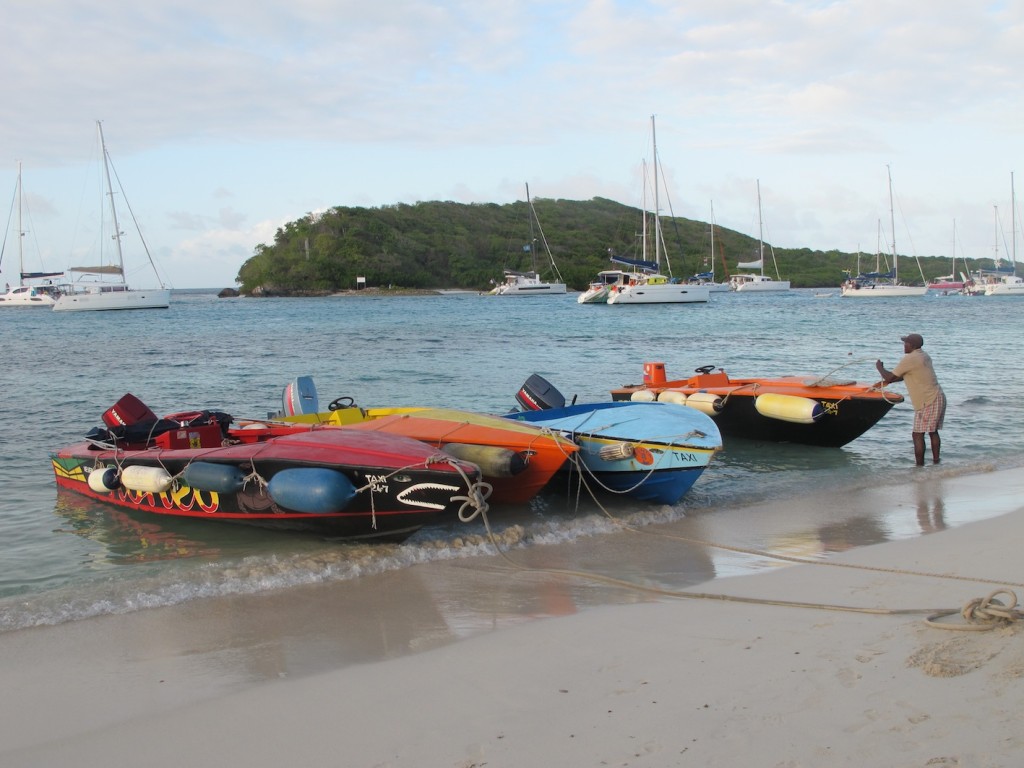 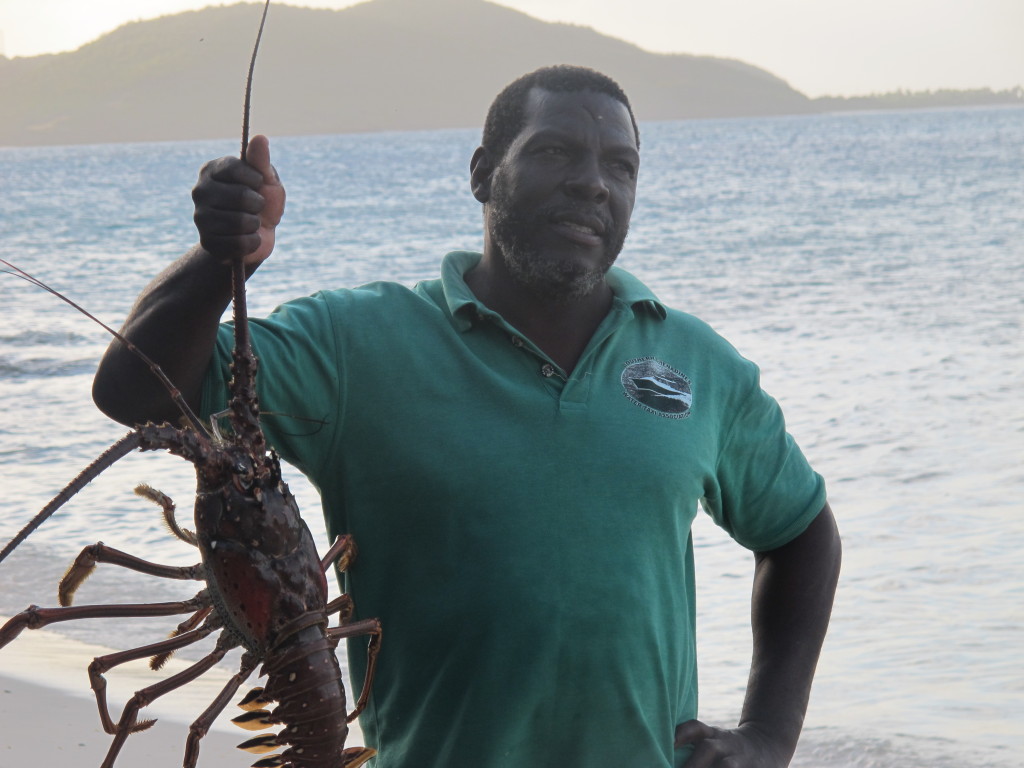 they don’t get much fresher than this! 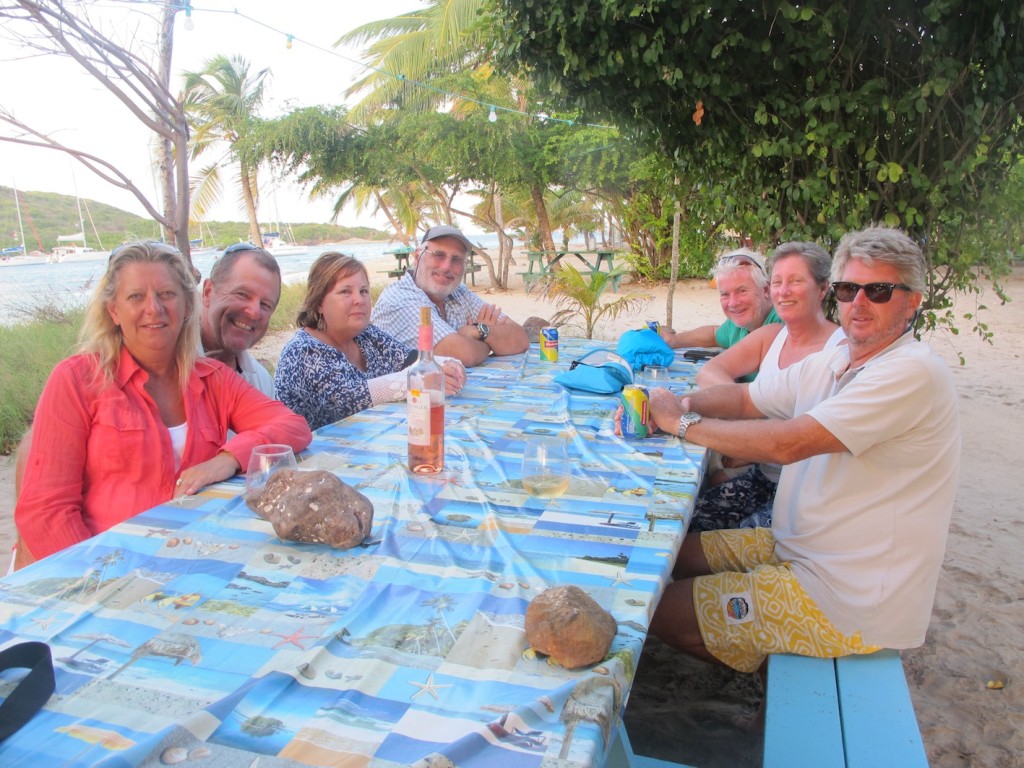 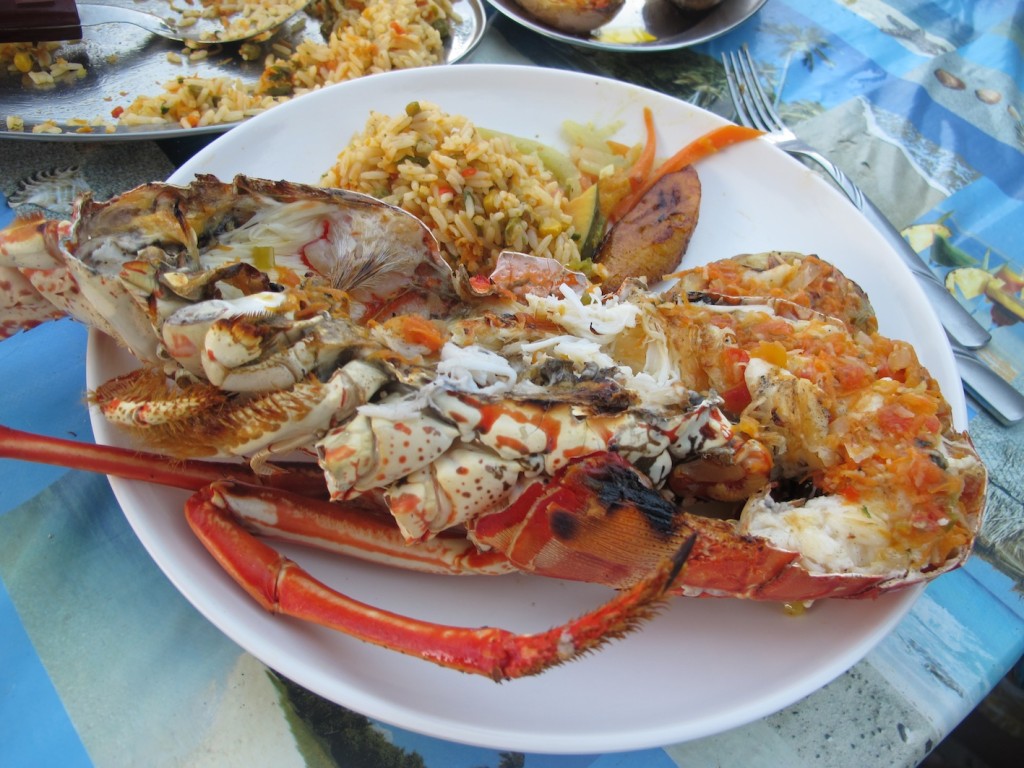 And what a feast it was!

The next day we snorkeled off Petit Bateau and marveled at the Caribbean colours of earth, sky and sea. 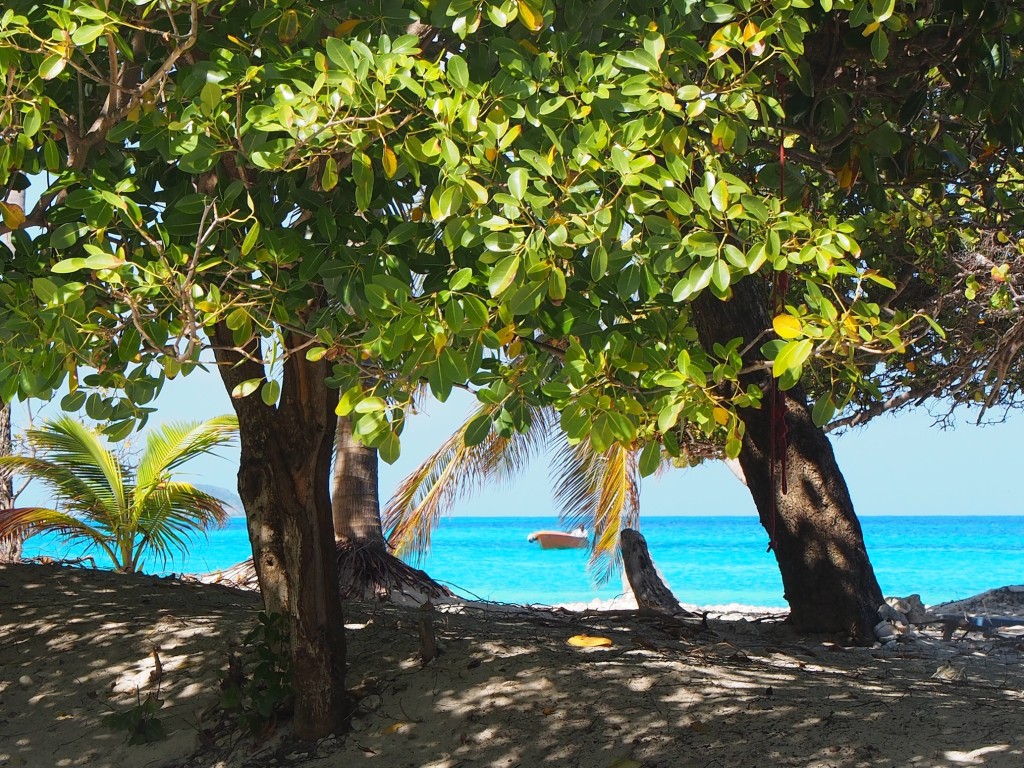 the colours of the Caribbean 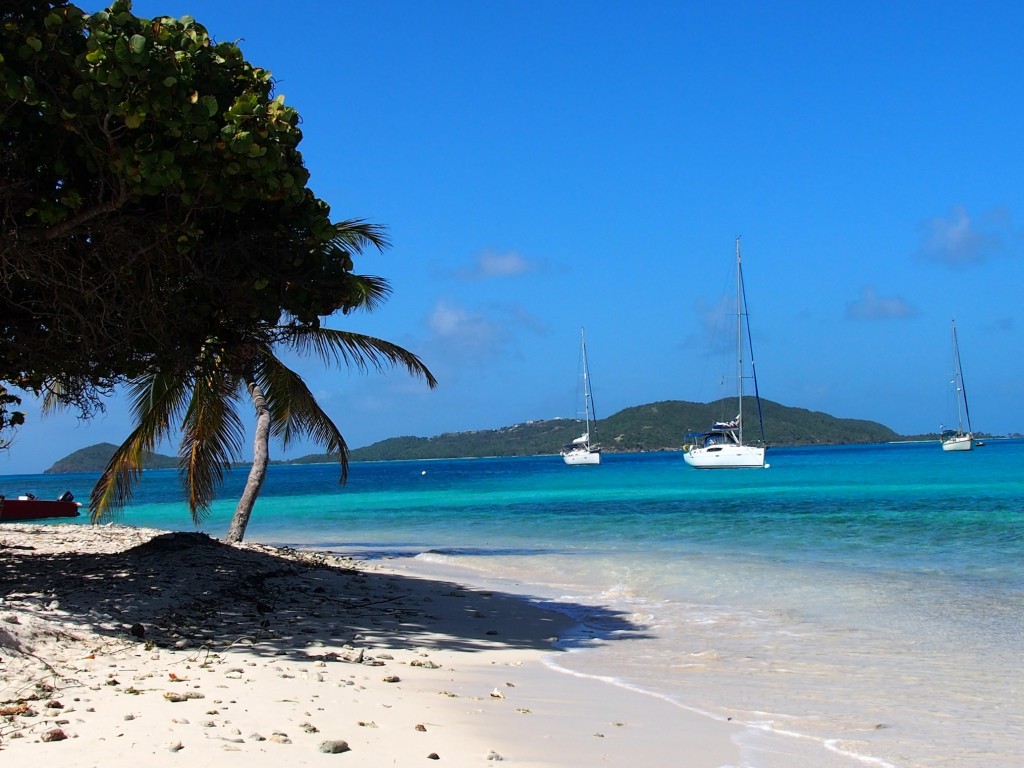 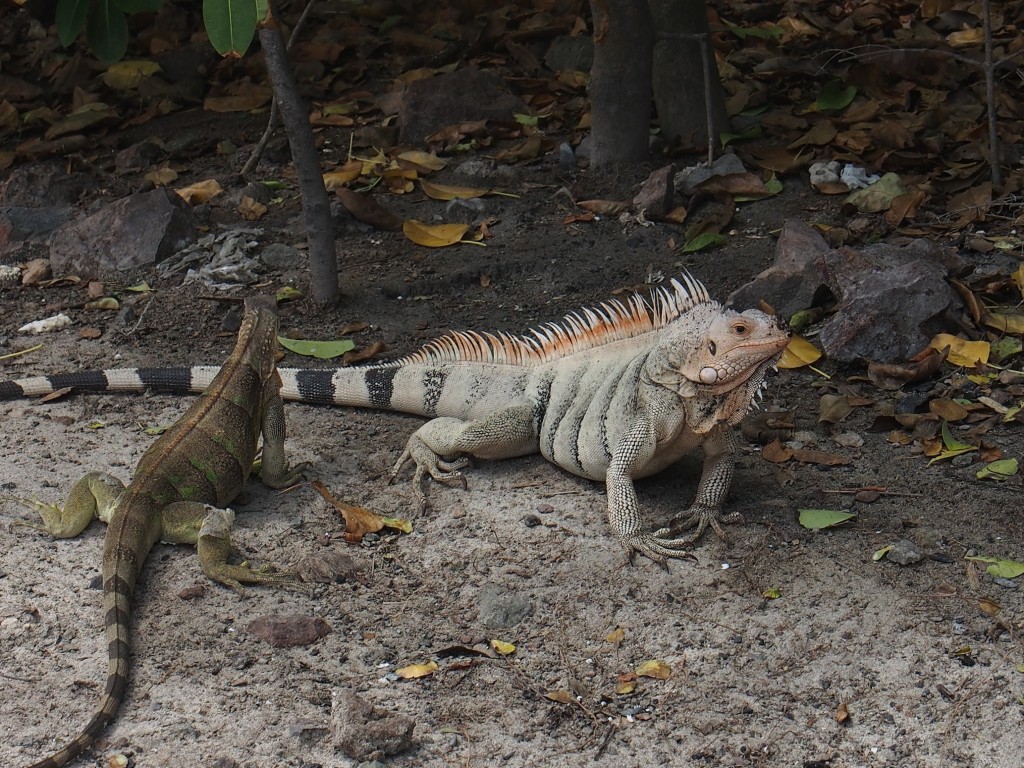 From the Cays we pushed on to Union Island, on the way passing the private and beautiful resort of Palm Island where we would have stopped for a while except the anchorage was too rolly. 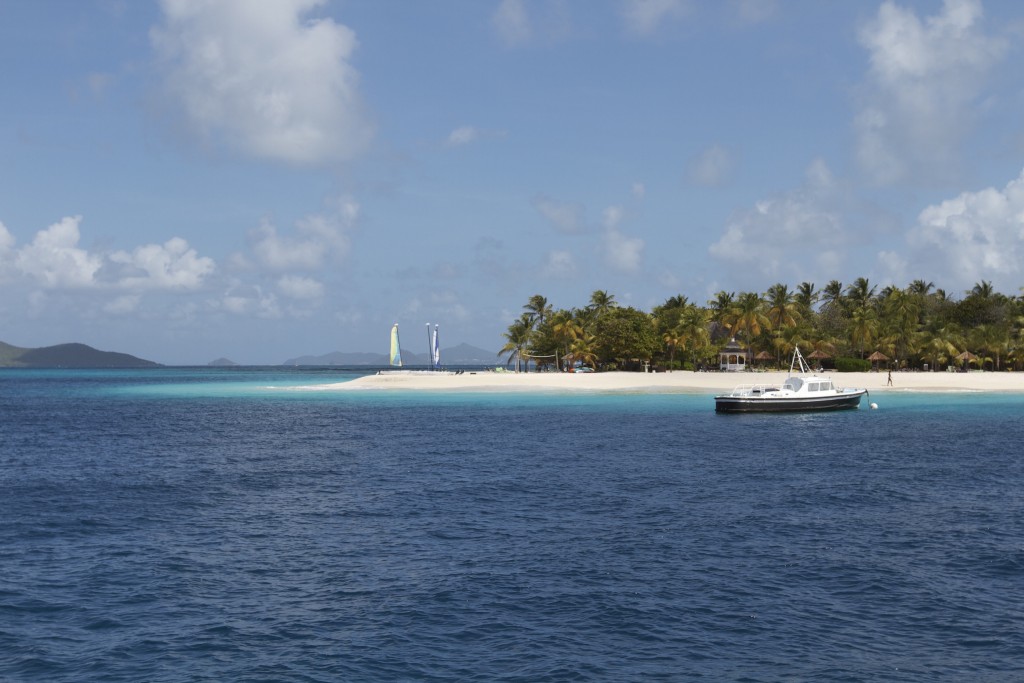 Union Island is the southernmost part of St Vincent and the Grenadines. We wanted to anchor out in Clifton Harbour as we needed to fill dive tanks so that Bruce could start teaching Rob his scuba course. Unfortunately the bottom was sand over hard coral, so after the third attempt (and more than a bit of angst on board), we decided to pick up a mooring before mutiny set in. A good decision! 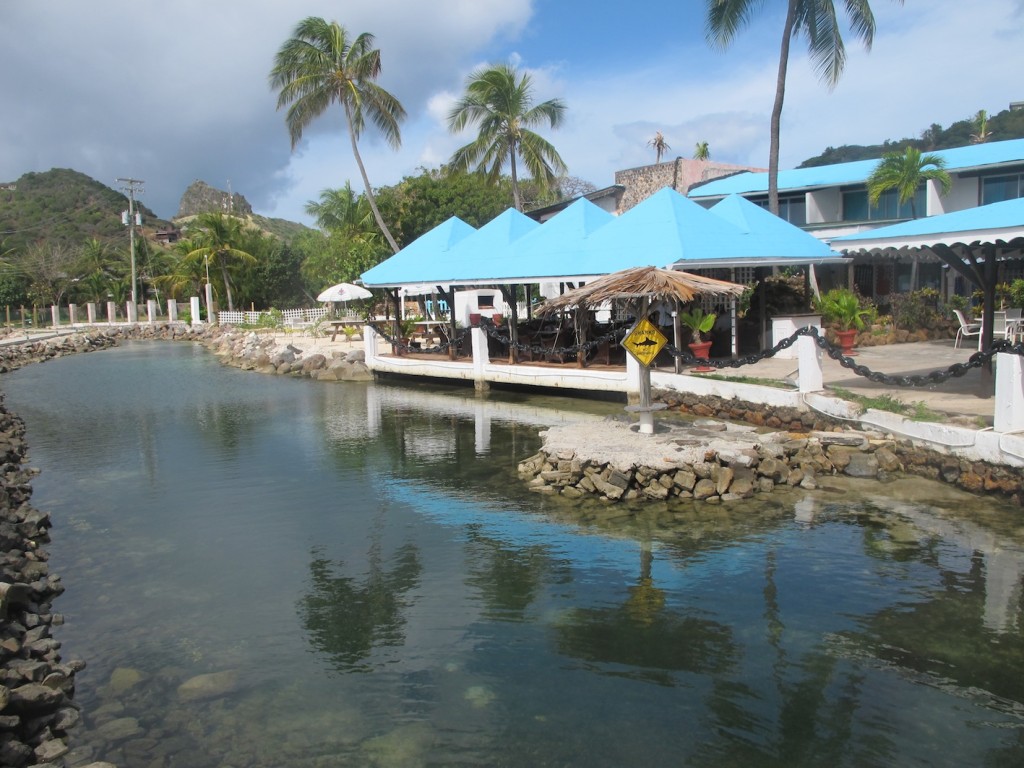 By now, my fingers were healing well but the next casualty on board was Bruce. We were all ashore doing provisioning and shopping while Bruce tinkered with the dive compressor which was stubbornly misbehaving. As I was about to head back to the boat I got a call from Bruce “Can you please come back to the boat RIGHT NOW”. Me: “What’s up?” Bruce “It’s a medical emergency, just get here as fast as you can”. With gruesome images swirling in my head I ran to the dinghy, with the Rasta man on the dock calling to me “No hurry here in the islands Mon” “Yes, there is” I yelled as I jumped in the dinghy and floored it to the boat wondering what I was going to have to deal with. Bruce was sitting in the cockpit with a bloodied rag around his left forearm and hand, and the dive compressor was surrounded by what looked like the remnants of a massacre. It turns out that in the process of trying to fix it, he had it running without the blade guard on it. A boat boy came by, and in the process of trying to answer him Bruce slipped on the deck and his arm and finger connected with the blades. Luckily the blades are plastic not metal, otherwise the damage would have been extremely severe. As it was, he had an impressive slice through the top of his pinky finger and nail, and a couple of deep lacerations on his arm. It took a little while to clean it all up and bandage him, and clean the deck. Thank goodness we’ve both done our first aid courses, as so far we seem to take the prize for the klutzes on board!! From now on we’ve vowed to not leave Bruce unsupervised when machinery’s involved! 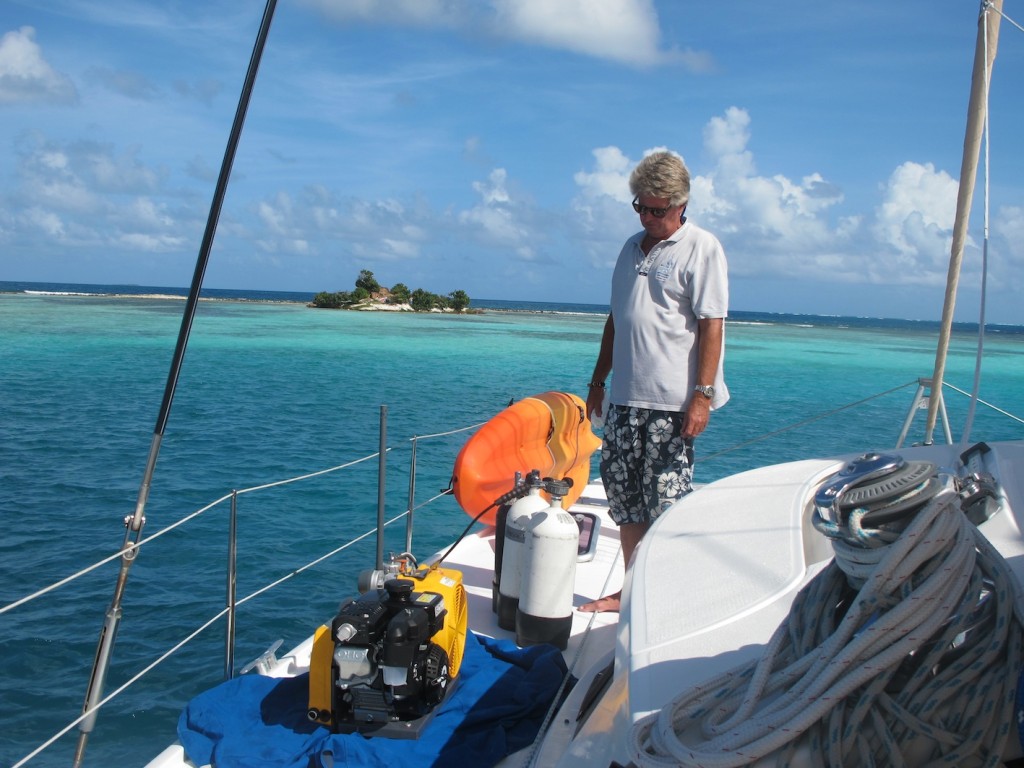 I decided that the best remedy for him would be a stiff drink, so we dinghied over to Happy Island Bar, a great little place on the reef built on conch shells, resounding with reggae music and killer rum punches. It was fairly quiet when we went, but the day before the rest of the crew had checked it out and reported back that there was also more than a whiff of the local ‘erb going around! 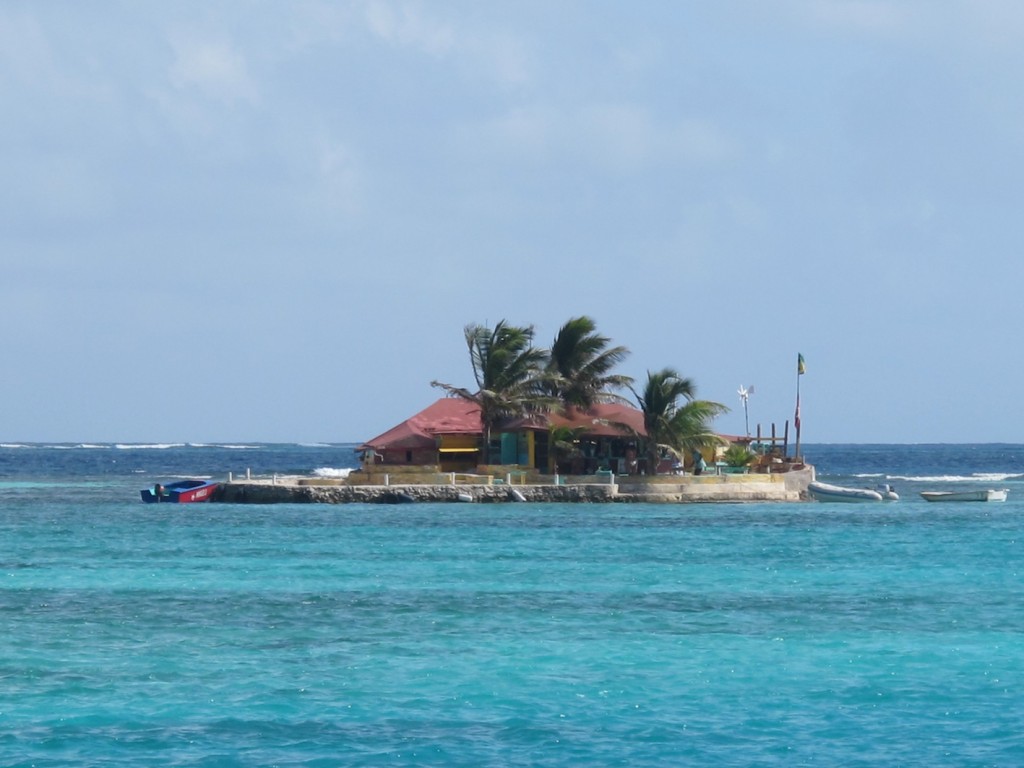 Happy Island Bar, the local hangout built on the reef 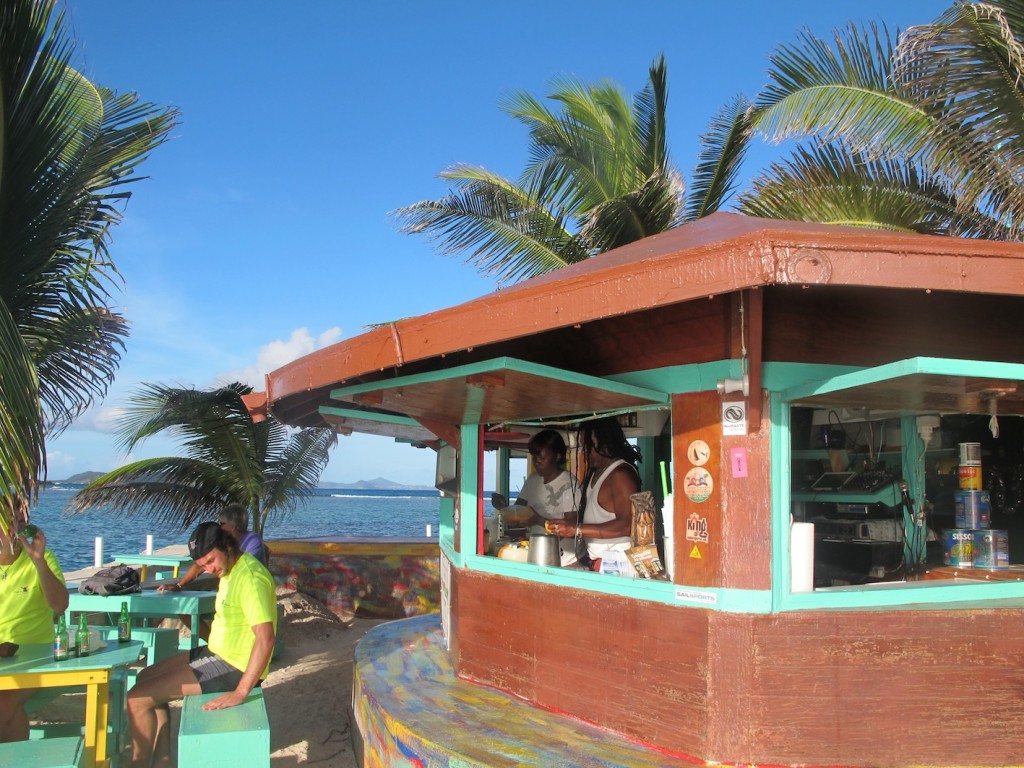 We spent a couple of days at Union getting all the chores done, including laundry and shopping and enjoyed the laid-back feel of the Island and the friendliness of the local people. 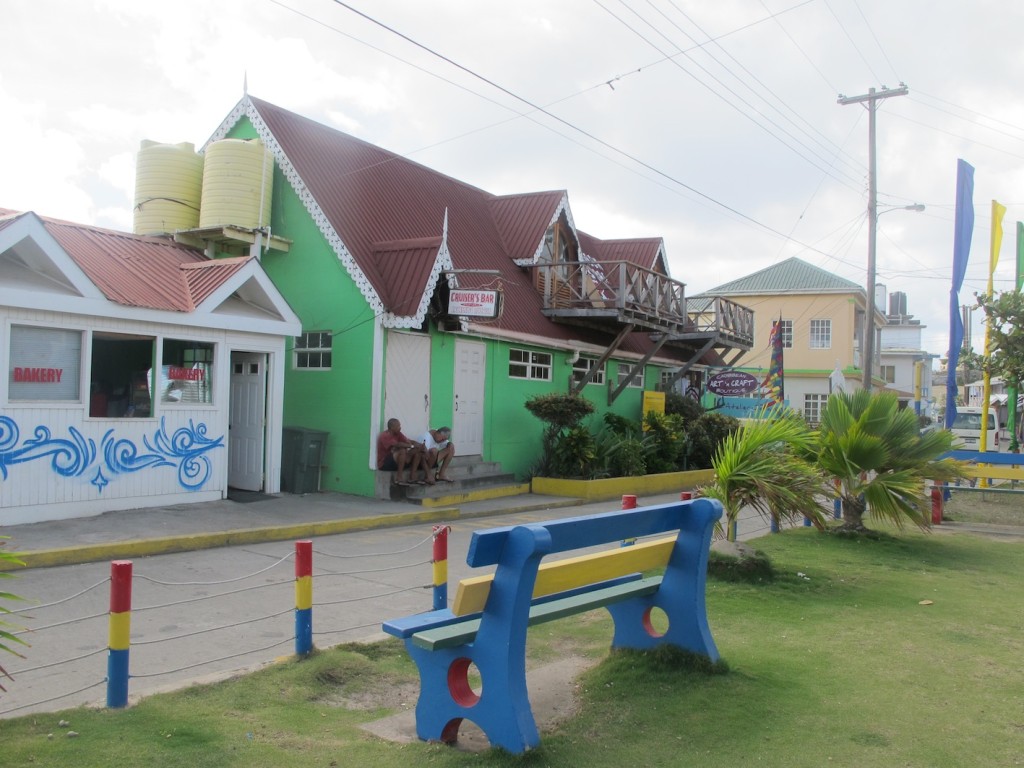 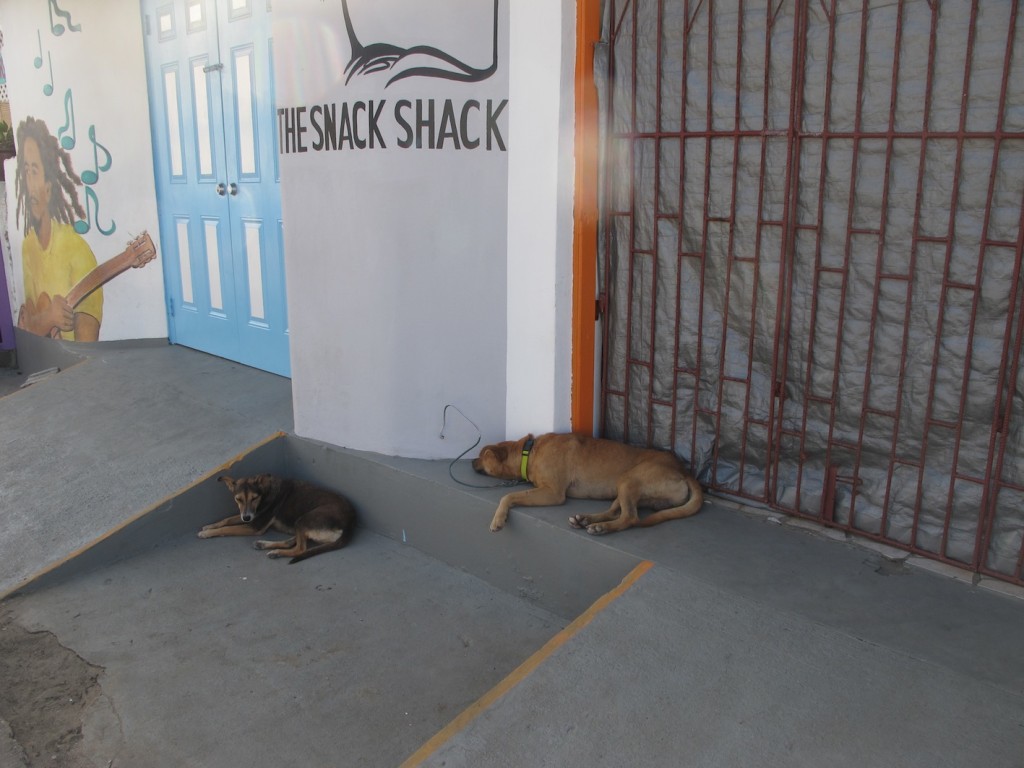 Even the dogs are pretty laid back on Union Island 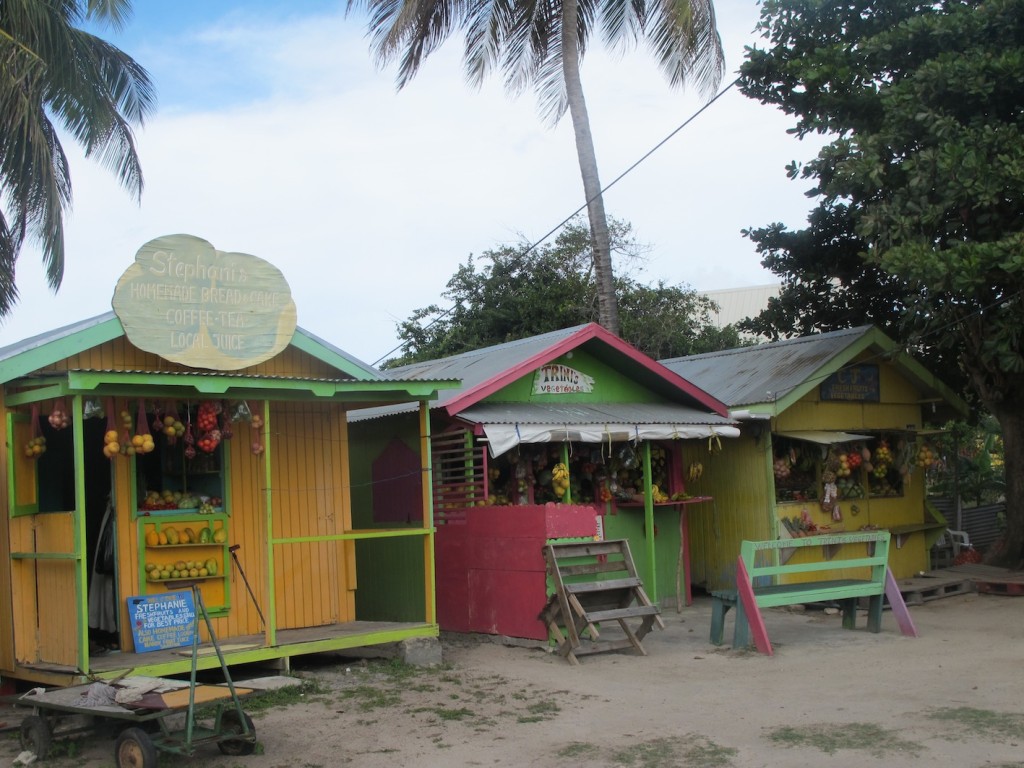 We did, however, find time for some R & R at Sparrow’s Resort, across the other side of the Island. A magic spot where we enjoyed some refreshment and a swim. 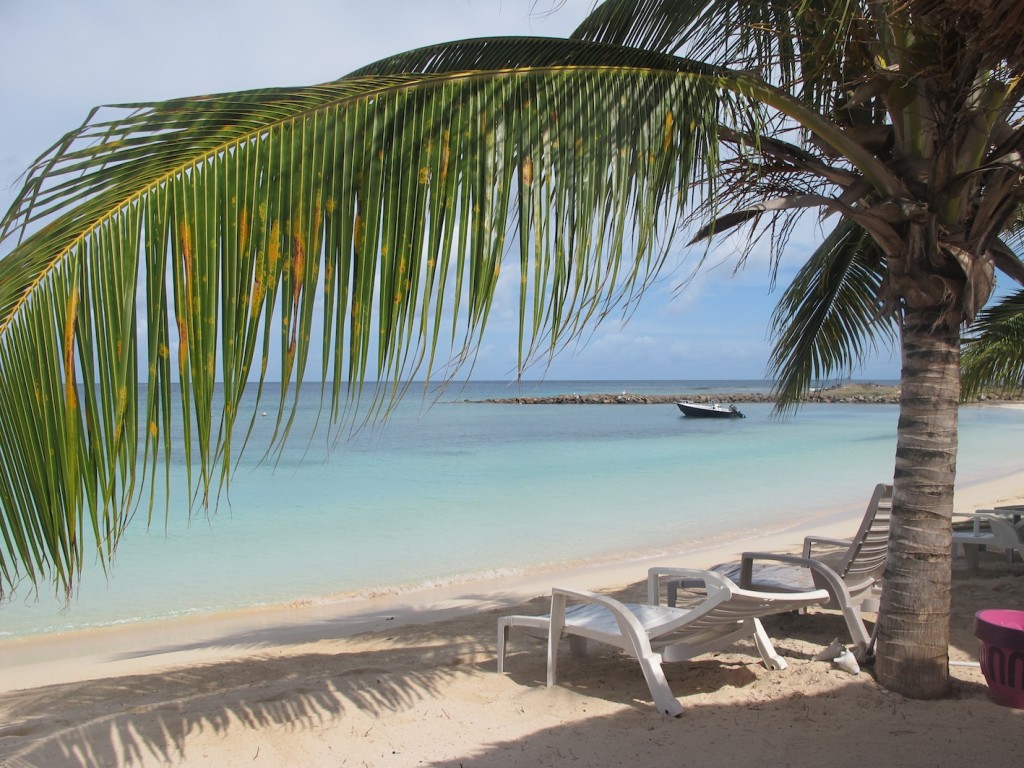 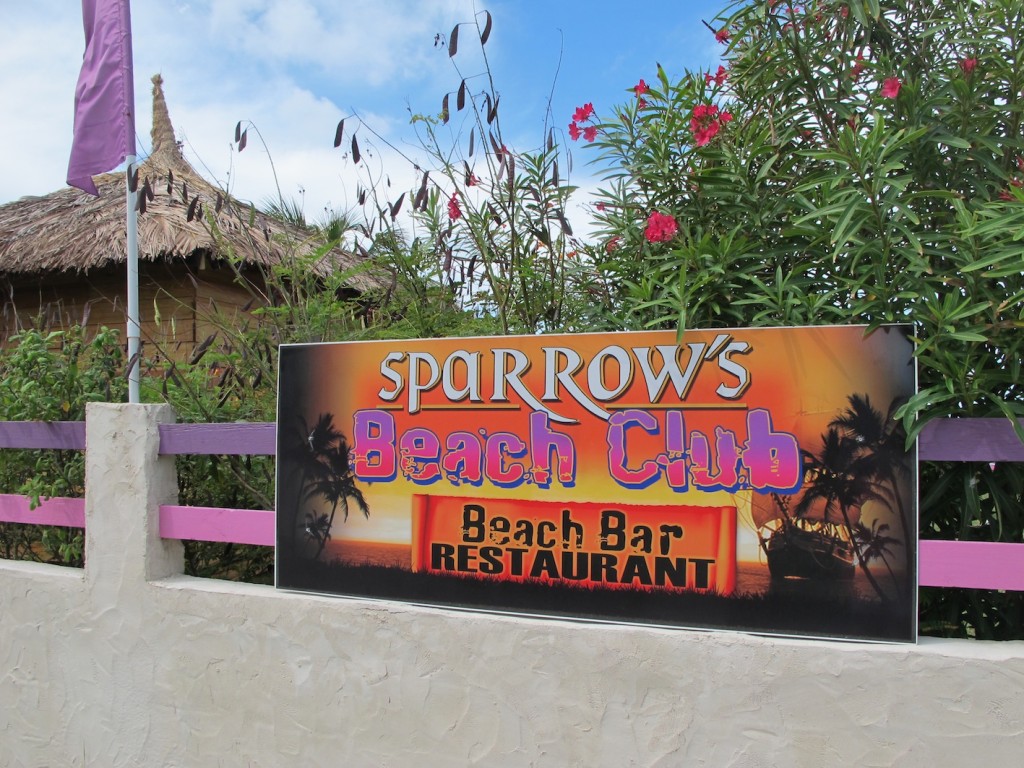 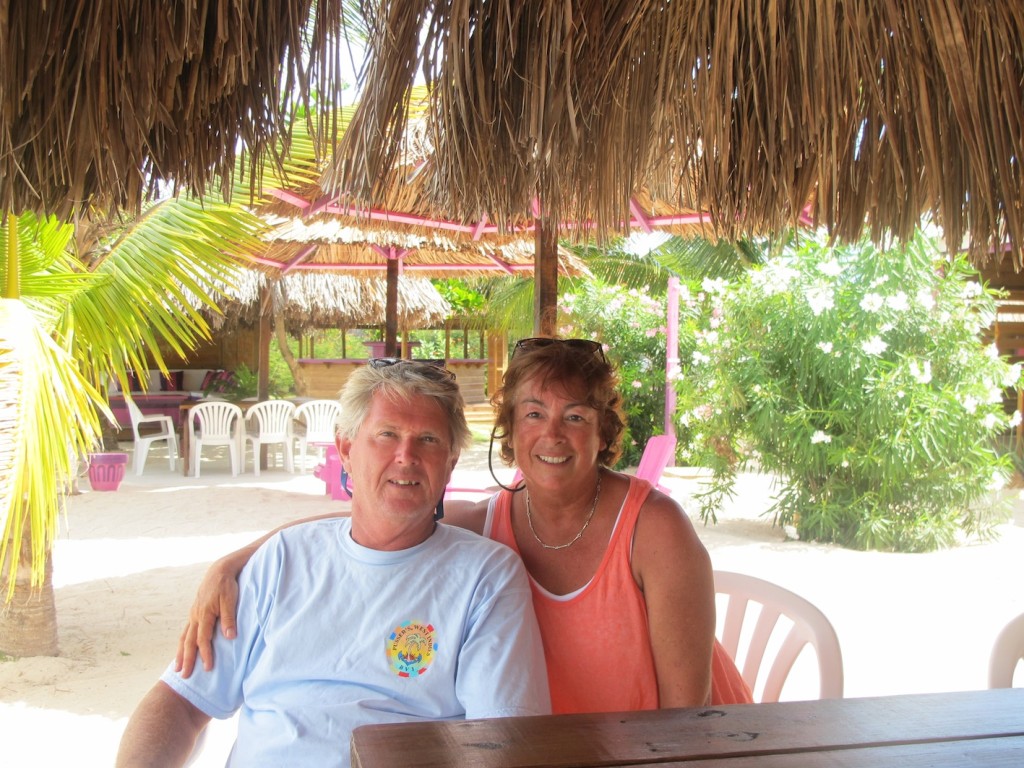 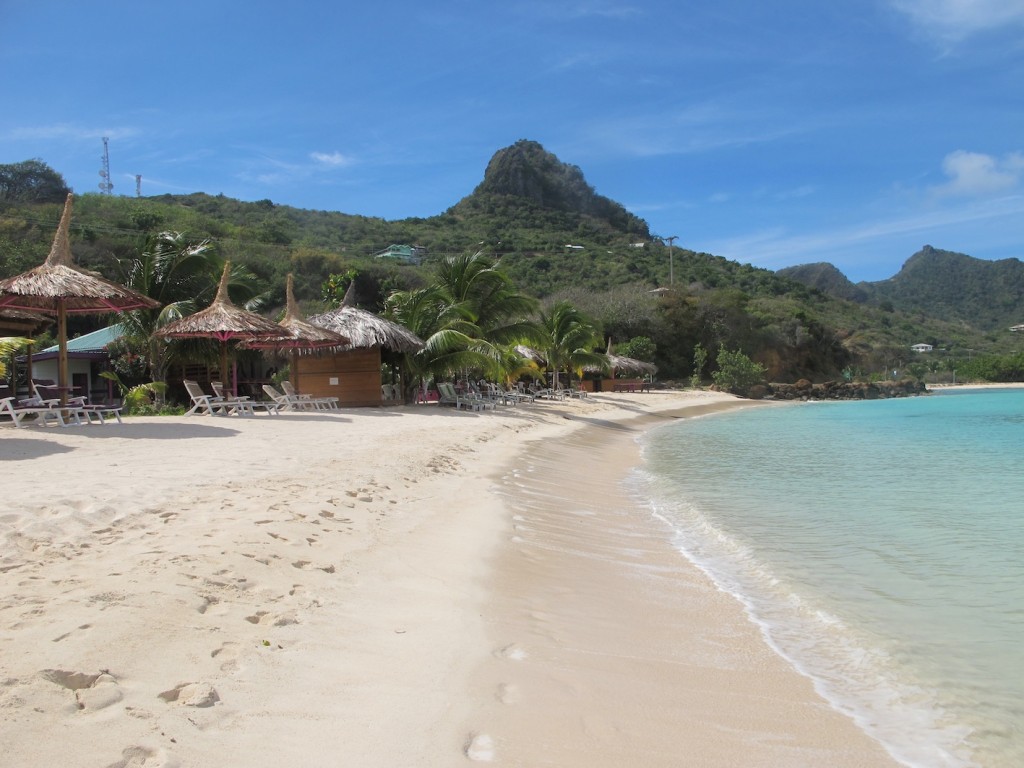 Not too hard to spend time here!

Sadly, we need to keep moving, so now it’s on to Carriacou and then our southernmost stop in the Caribbean, Grenada.