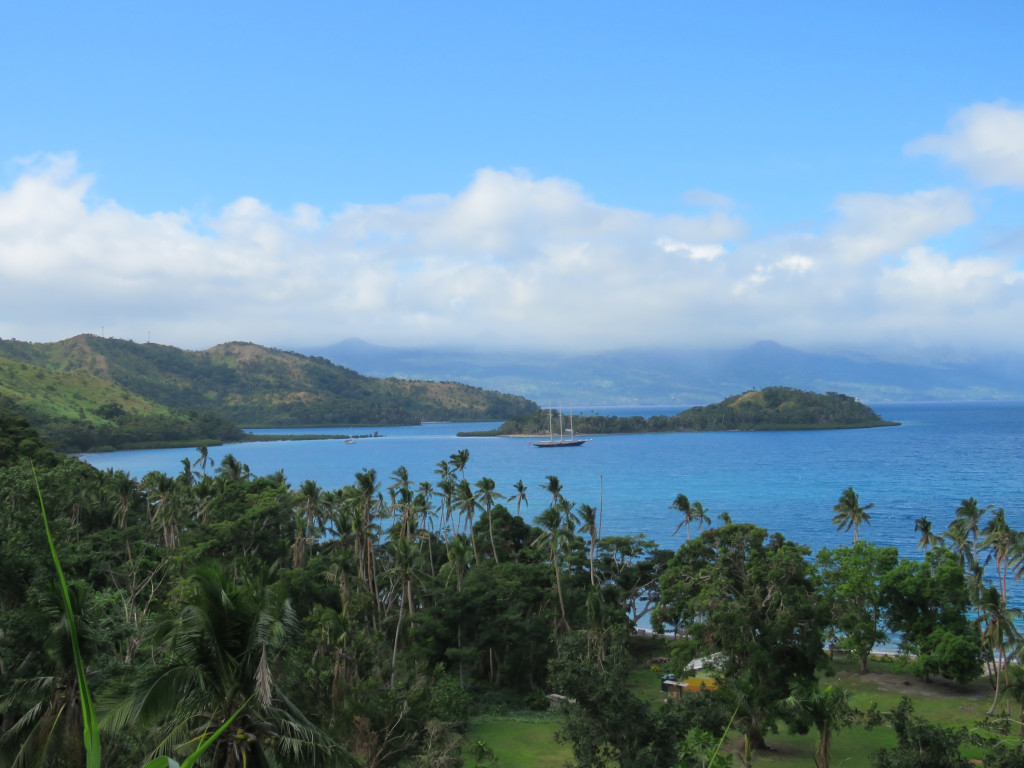 You meet the most amazing people as you travel. Particularly when travelling through the islands, each with their own unique peculiarities. And so it came to pass that we met $10 Jack.

We’d just arrived in Viani Bay on the north-eastern side of Vanua Levu looking to dive on the famous Rainbow Reef. The advice given was that there was a local named Jack who had a mooring at the top of the bay and offered guided dives on the reef, using your own boat rather than a charter boat. As we neared the top of the bay we noticed a local standing up in his dinghy holding the loop of what looked like a mooring rope and so I thought I’d better go and ask him if he knows Jack. As I wheeled the boat around a quick check on the depth gauge had me somewhat panicked – the depth had gone from 17 metres to a slightly shallower 1 metre under our keel. In Fiji we’ve been told there are two types of sailing boats, those that have been on a reef (welcome to the ‘reefers club’) and those that are about to go on the reef. We’re not keen to join the reefers club so some fast wheel and motor work was required to stay clear.

Having avoided the obstacles we made our way over to the dinghy and enquired if he knew Jack and he quickly replied that he did. “So where do we find him?” I asked. “Right here standing in the dinghy” he replied. After some deliberation we agreed to take the mooring in return for a donation, which turned out to be FJ$10 a night. Very reasonable we thought, until along with the price we got Jack’s life story, not once but twice over the course of our stay. Oh, and he was keen to sell us a block of land possibly with the steak knives thrown in! 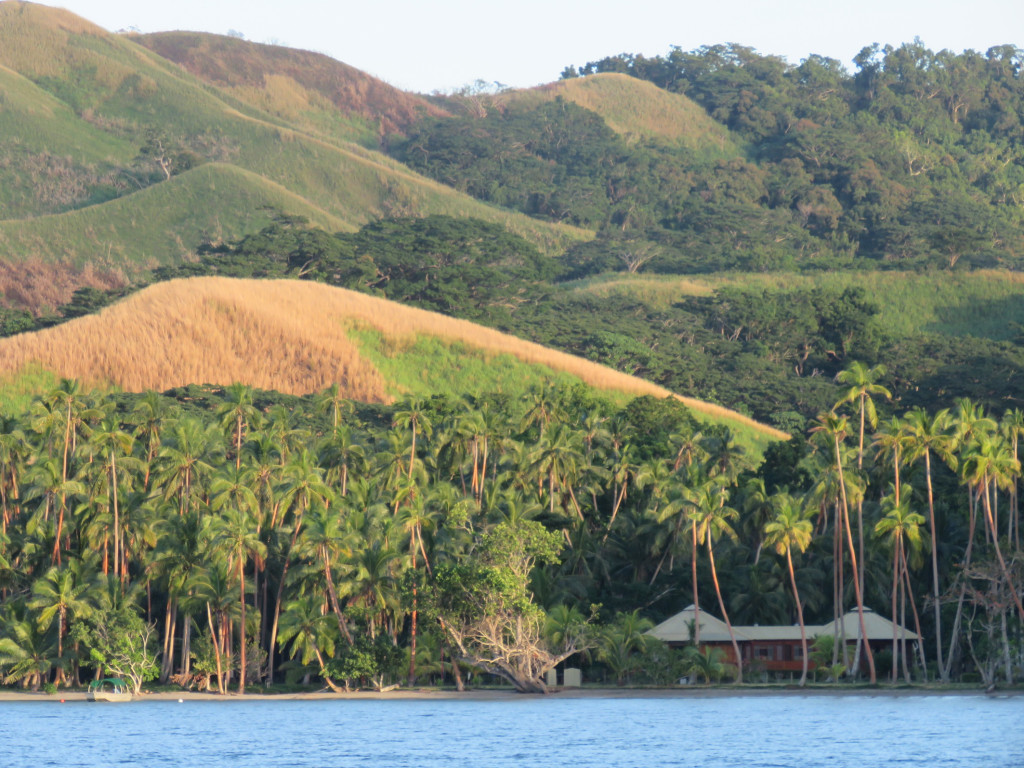 Some of Jack Fisher’s land, sold to an expat, with a rather grand home on it 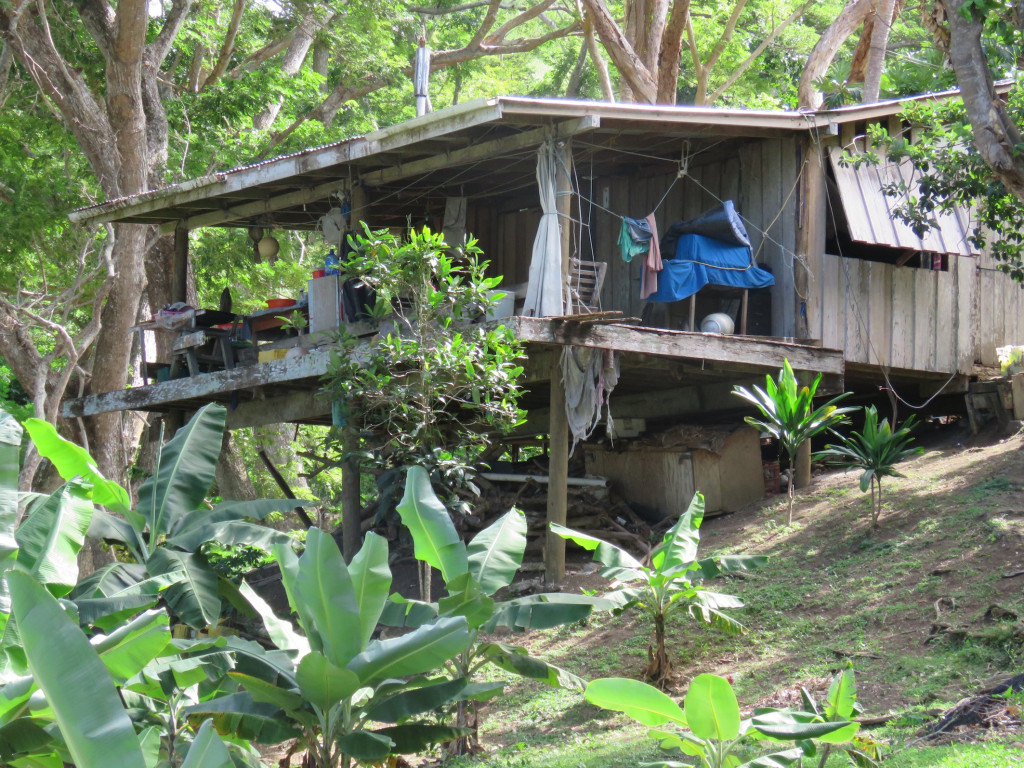 Discussing his services as a dive guide it turned out that for $10 per head he would ride with us in our dinghy to the dive site, advise on the dive, hang around following our bubbles as we drifted with the current and then ride back with us. Hmmm….seems to be a price trend appearing. Some people get the name Captain Araldite for the way they hang on to the helm of a boat for eternity, and so it was with Jack. No such thing as him coming along for the ride, once in the dinghy he grabbed the tiller and wouldn’t let go. Guess we were along for the ride! However, his guiding was excellent and the diving superb.

After a few days we met up with another Jack, a solo cruiser on “High C’s”. Jack 2 was keen to do some snorkeling on the reef, so we elected to take Toucan out and anchor behind the reef to avoid the very long dinghy ride. Jack 1’s response? “That’ll be $10 a head”. And once again, even though I thought I was the skipper, Jack stuck his hands on the wheel and didn’t let go until we returned to the mooring! 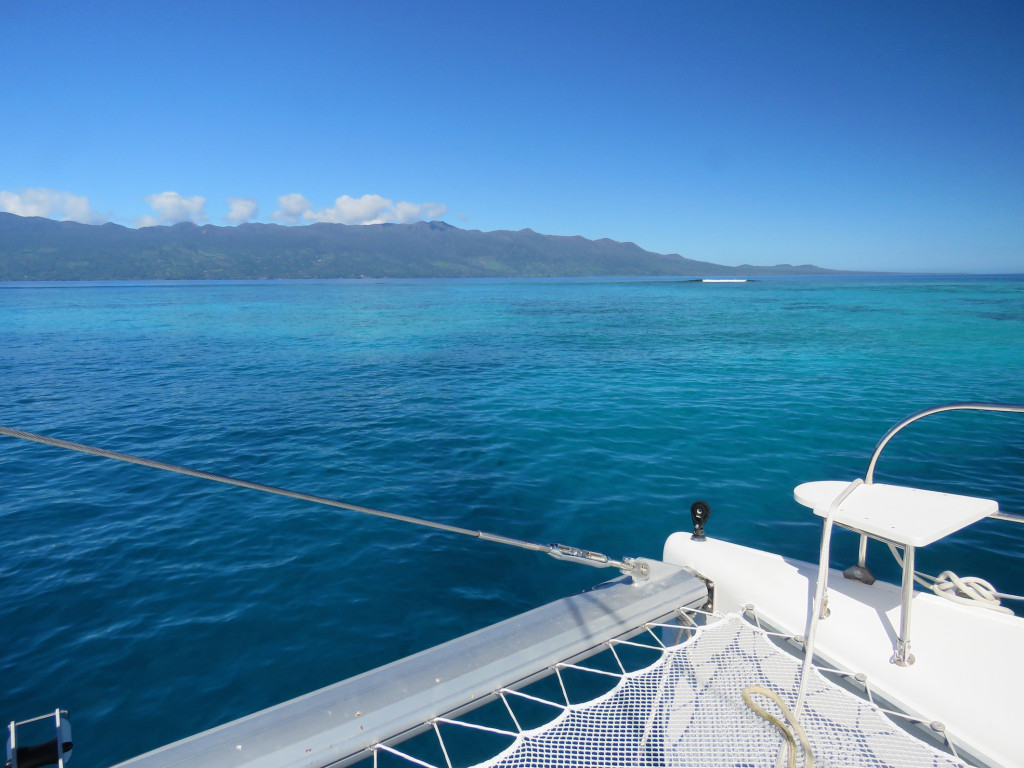 Anchored alarmingly close to the reef, but Jack assured us it would be OK!

His pricing guide wasn’t just limited to dive guiding as we discovered a couple of days later when we decided to join Jack 2 on “High C’s” for a provisioning trip to Taveuni Island. A short radio talk with our dive guide and we were suddenly on the $10 a head shopping tour. 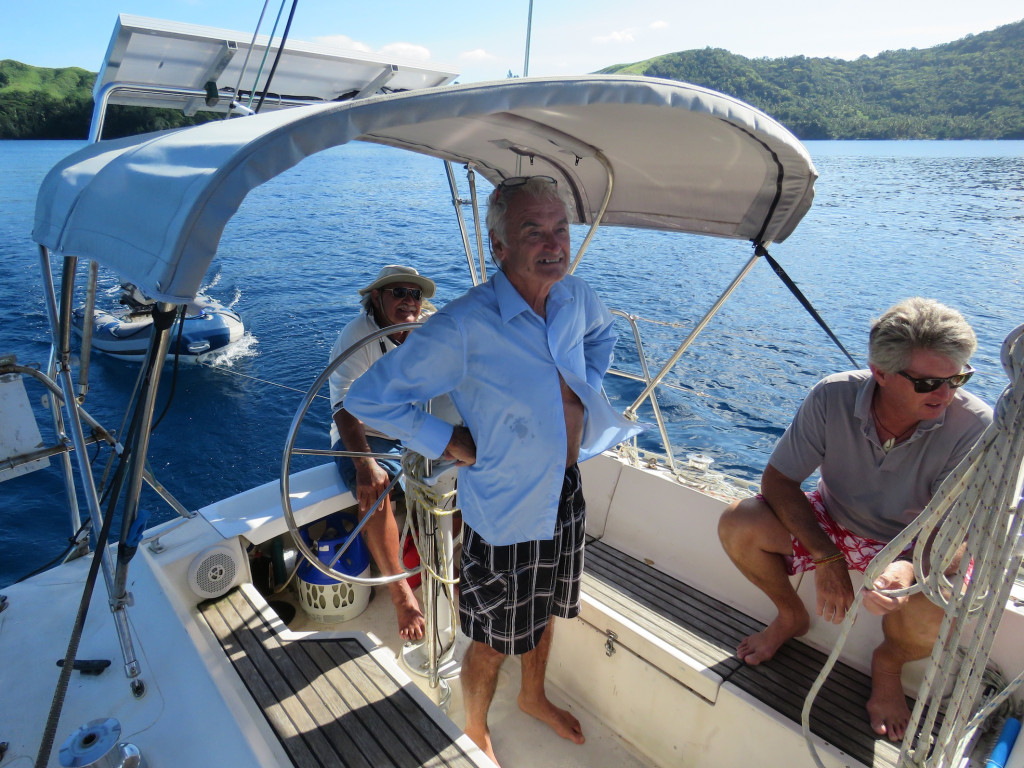 As it turned out it was impossible to land and leave the dinghy where the supermarket was located, so Jack 1 came in handy. Not so fortunate for Di, who was handed an extensive shopping list as we left the boat – 10 kg of flour, 10 kg of rice, 4 kg of sugar….etc. Although he gave us money, we ended subsidizing his shopping as the bill came in a bit higher than estimated. We also lent him $20 to pay for a taxi to take a couple of bags of coconuts to his grand-daughter who lived on the island. I guess between Di and I there was our $10 a head again! 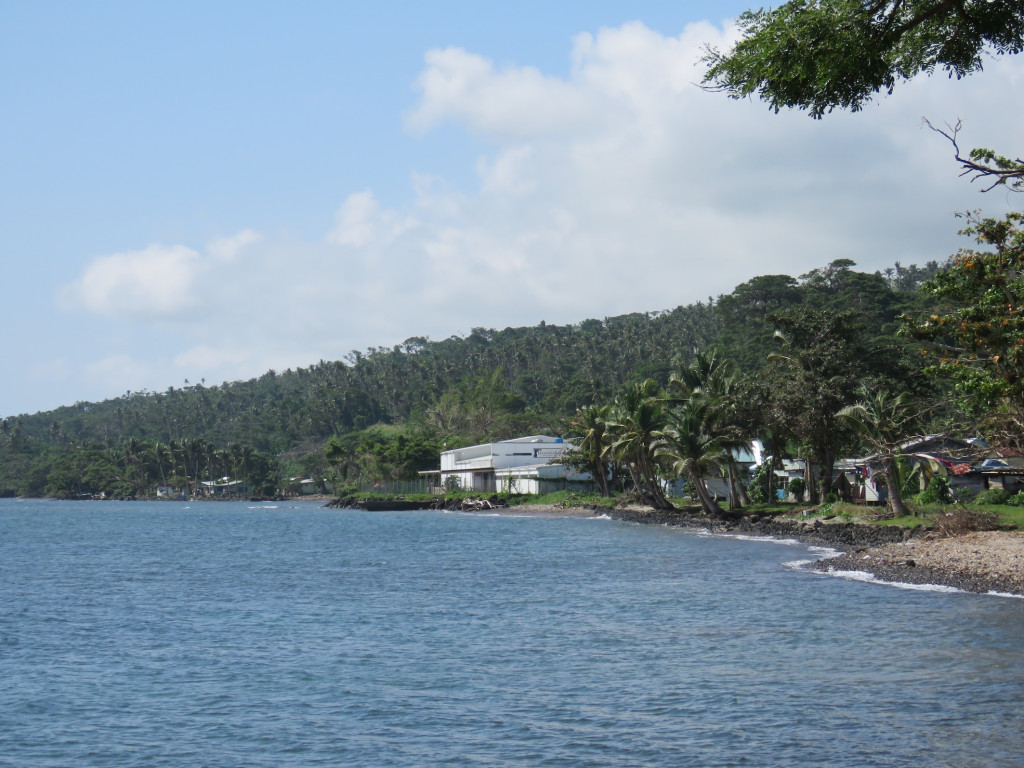 The Fijian people are extremely friendly and after seeing the effect of cyclone Winston you can’t help but be generous when opportunity arises. Jack is just one of the many personalities that you can’t help but like and enjoy the stories they provide, and I’m sure we’ll meet many more. Oh Jack….about that land….and by the way you need to raise your prices but just wait until we’re gone!

School’s out! The local kids coming home from school in Viani Bay 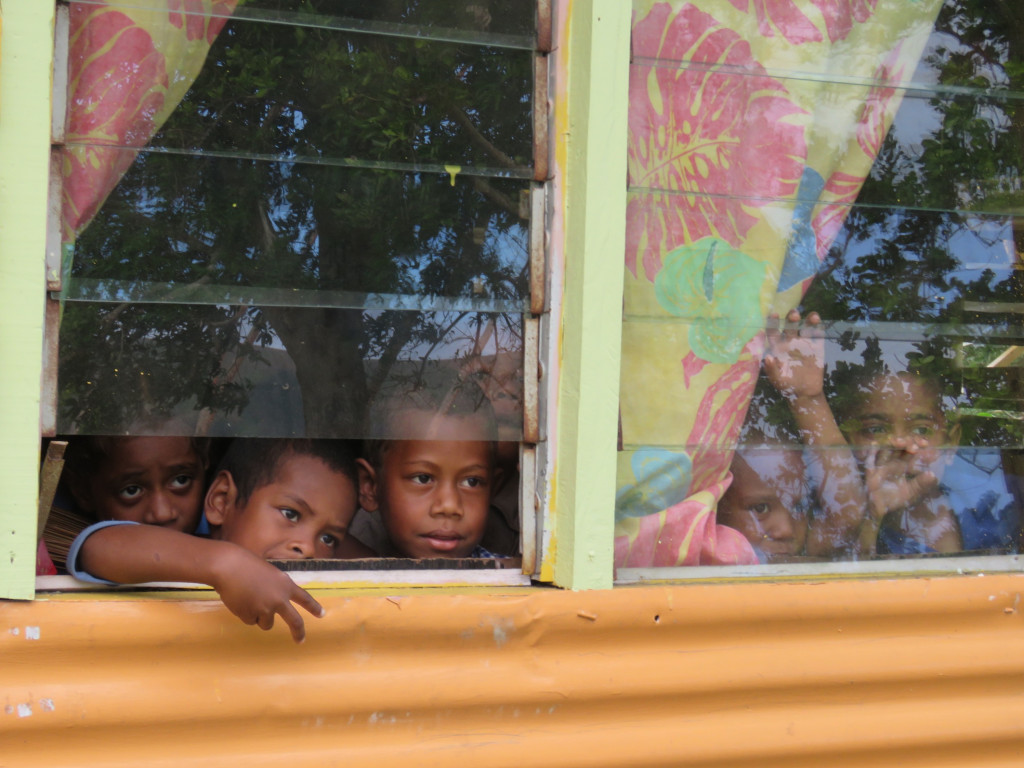 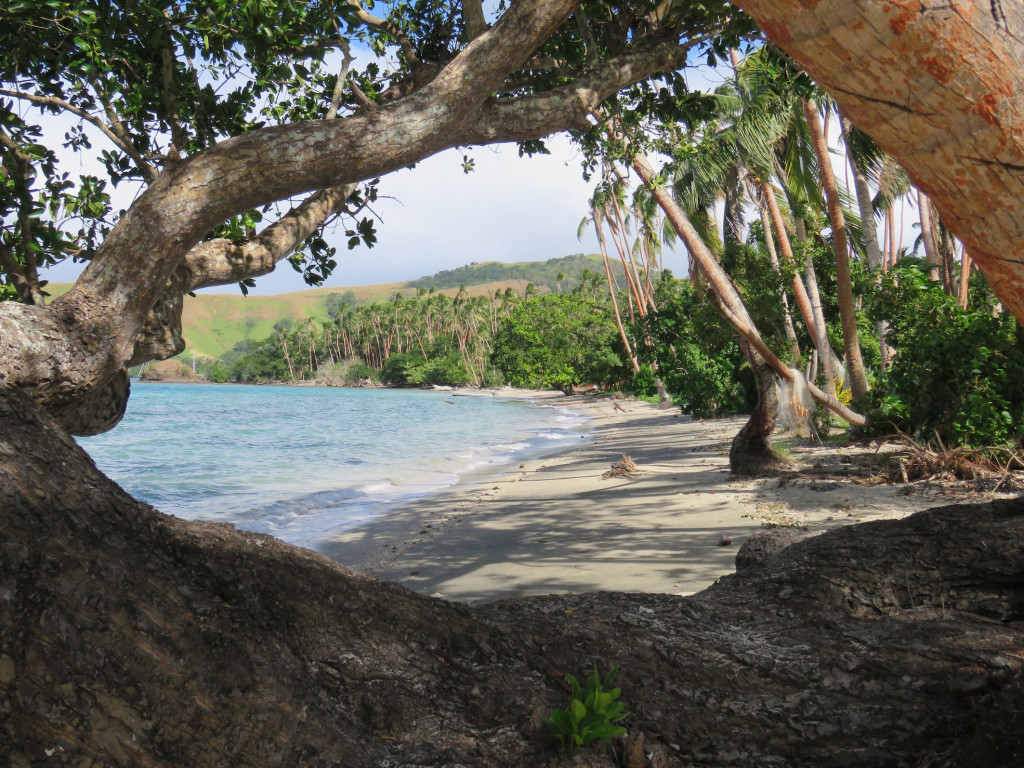