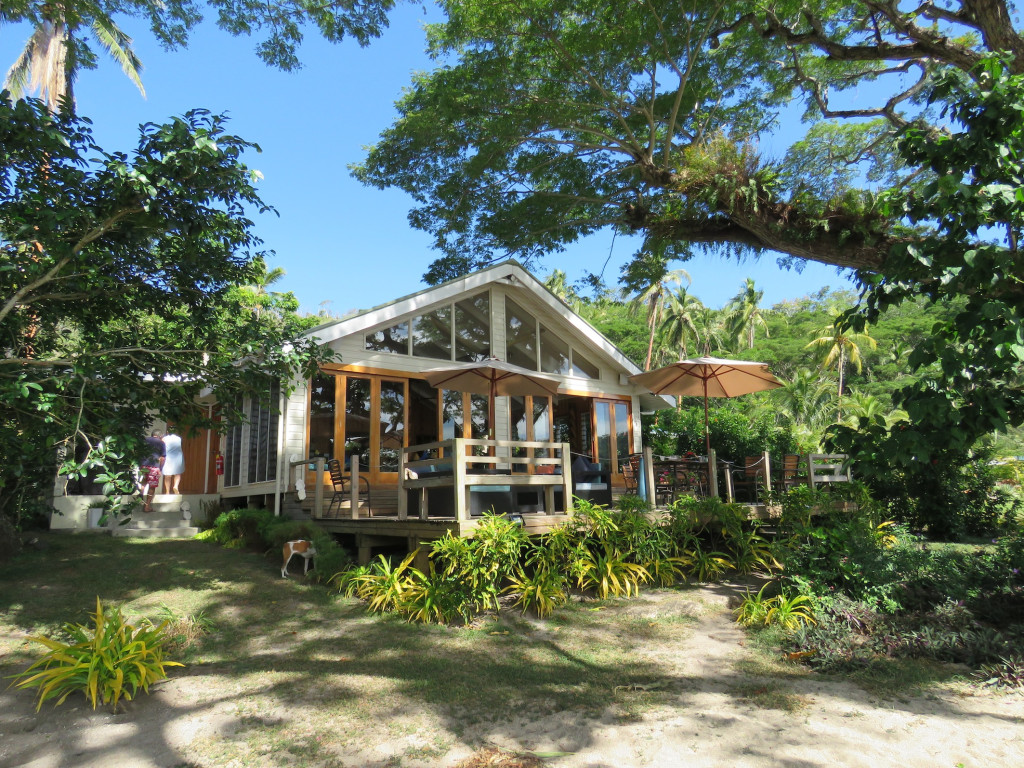 We’d had a great few days in Viani Bay enjoying the diving on Rainbow Reef, but then the wind picked up from the south, making the anchorage rolly and uncomfortable. Time to move our home somewhere quieter. We were keen to catch up with our friends from Bruce’s SSI days, Nigel and Carol Douglas, who own and run Sau Bay Fiji Retreat, and as luck would have it they were just around the corner, in Nasau Bay.

By now “Escape Velocity” had joined us, so together we upped anchor and motored the short distance round the corner, keeping a careful watch on all those reefs and bommies trying to lure us into the “Reefer’s Club”. Even so, we nearly came a cropper trusting our charts – the visibility was poor and we almost ran over the top of a coral bommie that should have been 200 metres away according to our chart. Lesson learnt!

Unfortunately the southerly was funneling through Nasau Bay when we arrived, so we found a quieter anchorage for the night in a neighbouring mangrove creek – it reminded us of Escape River in Far North Queensland, and the sunrise the next morning was gorgeous. 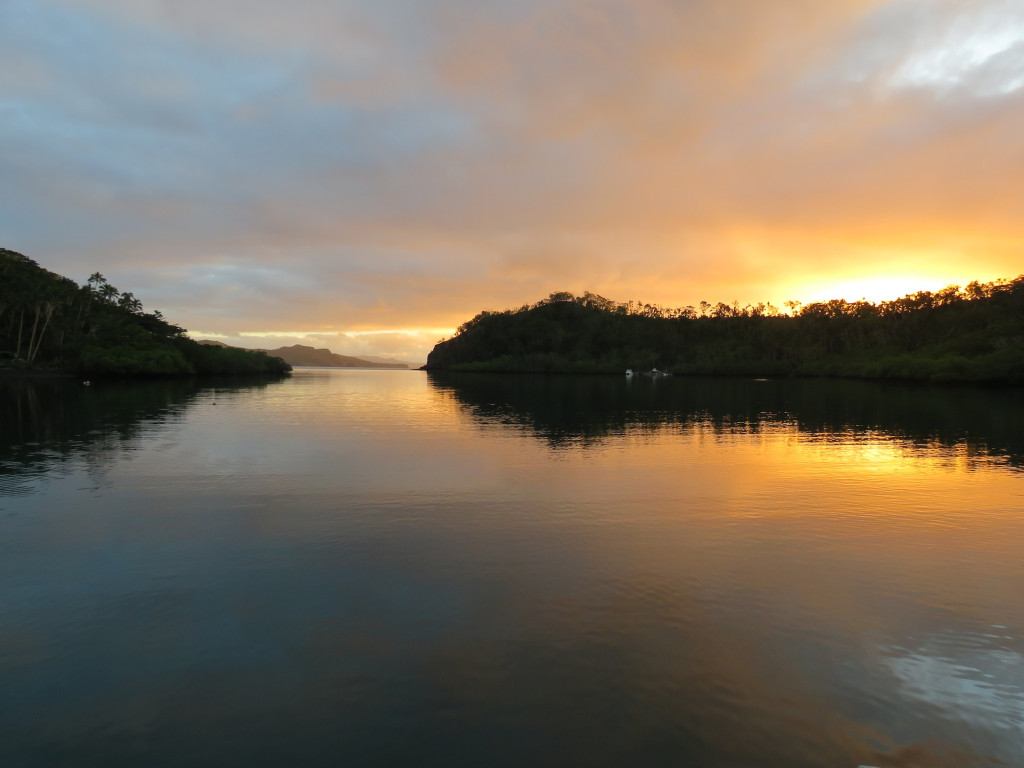 After breakfast we motored back round to Nasau Bay and dropped anchor in front of the retreat, nestled discreetly amongst the trees. What a truly heavenly place it is! Luckily, the resort was spared major damage from cyclone Winston although Carol and Nigel have been very busy clearing up debris, rebuilding the staff quarters and replanting the gardens. 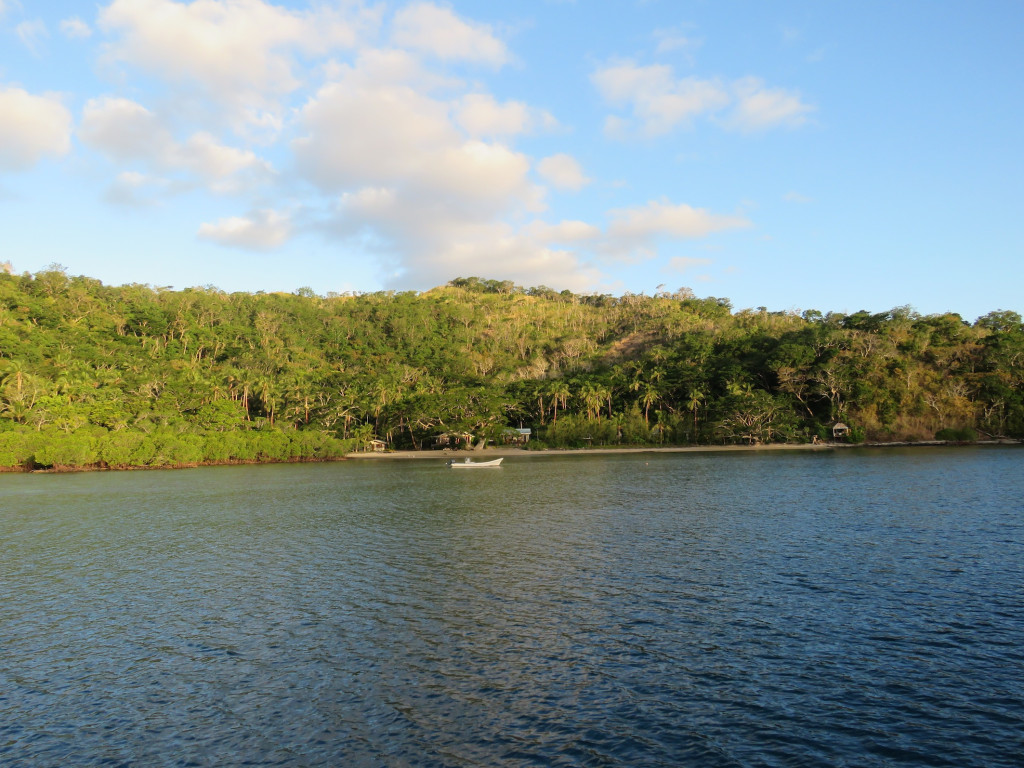 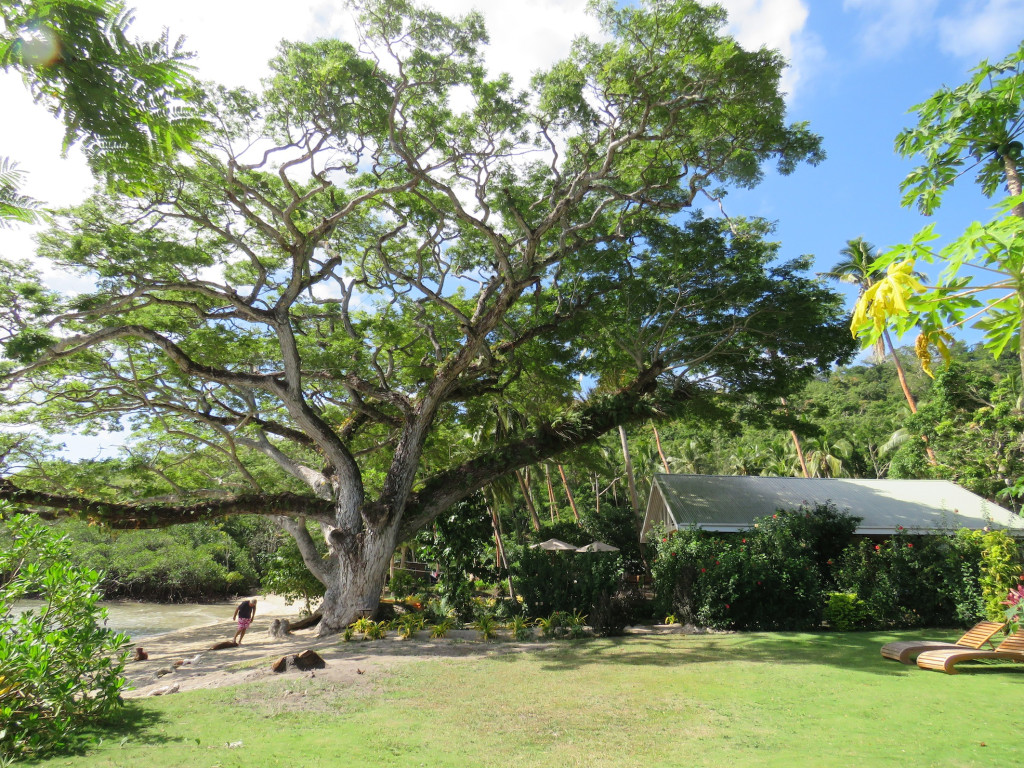 The magnificent rain tree was spared by Winston, not so lucky the neighbouring mango tree 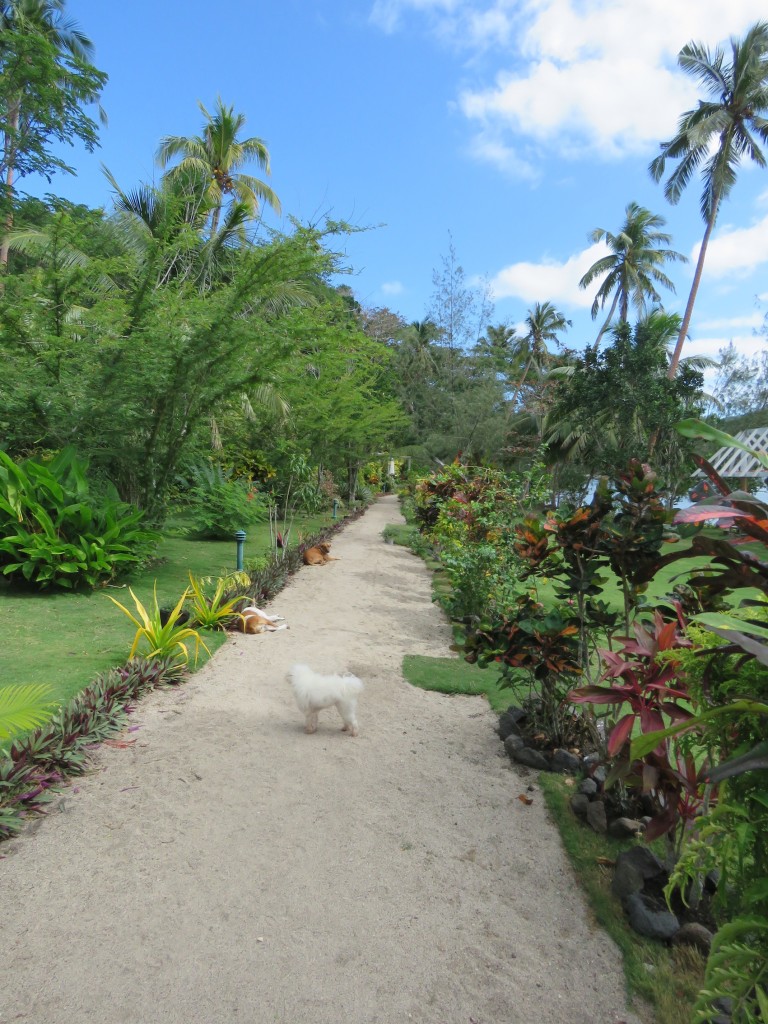 Timmy and friends giving us the guided tour of the gardens 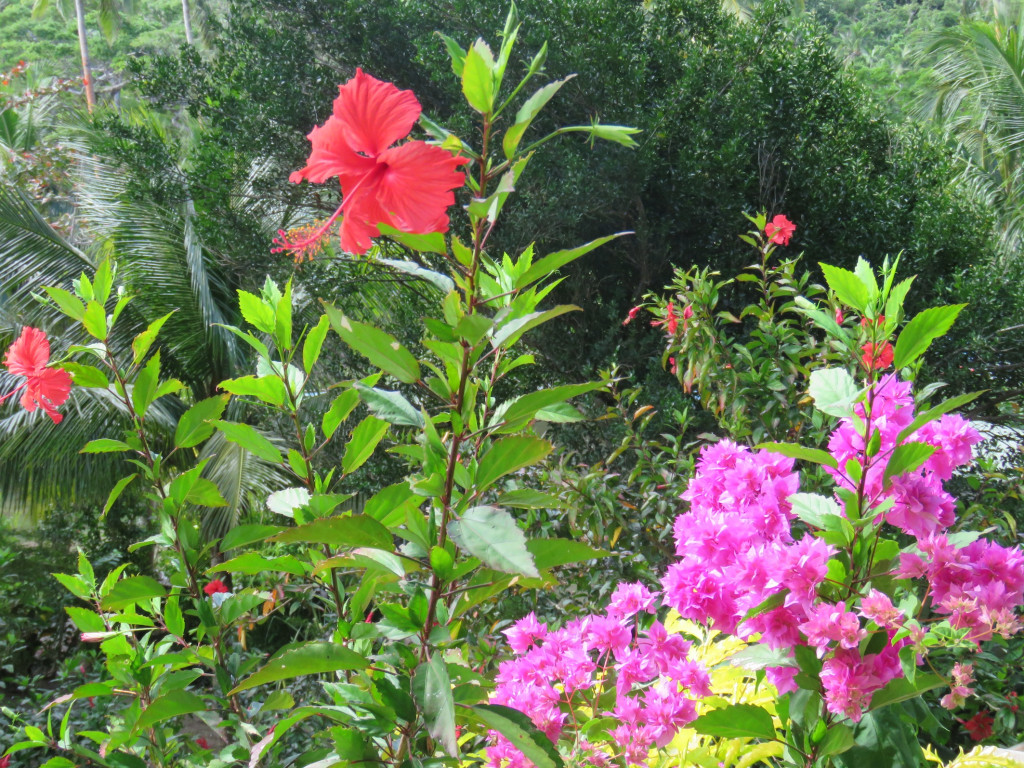 Carol & Nigel’s rescue dogs are as welcoming as their hosts! 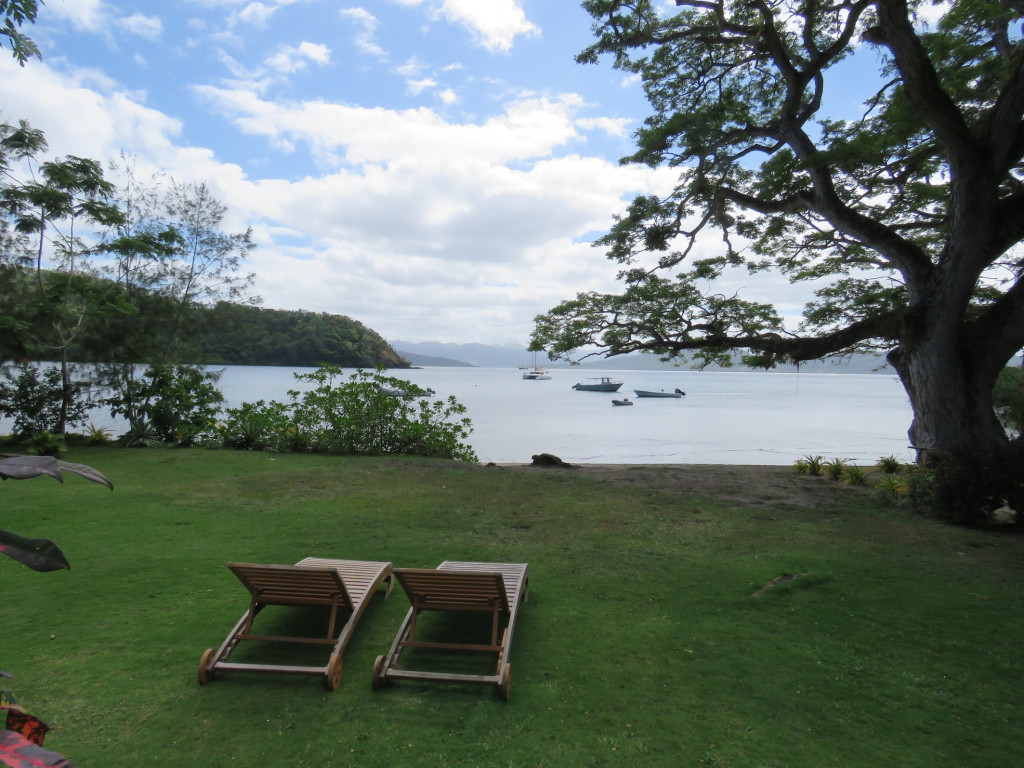 With capacity for a maximum of 12 guests, it’s truly a retreat of the best possible kind. Beautifully appointed guest bungalows, even a genuine African safari tent for the ultimate ‘Glamping’ experience. And the food was delicious! 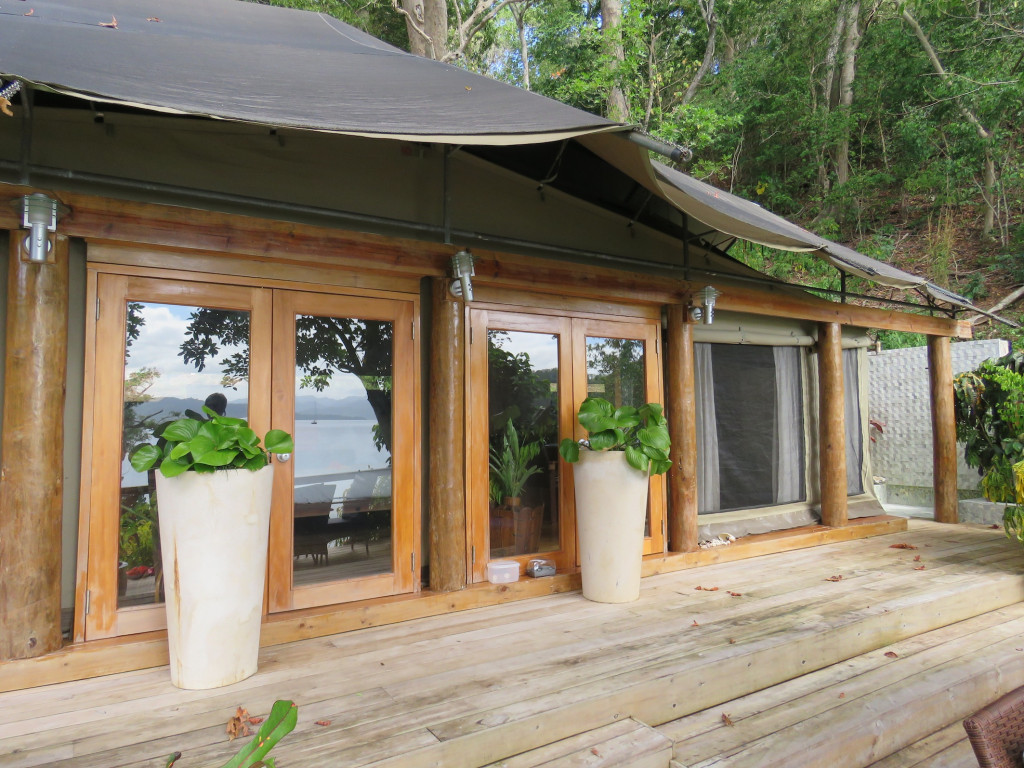 Glamping doesn’t get much better than this 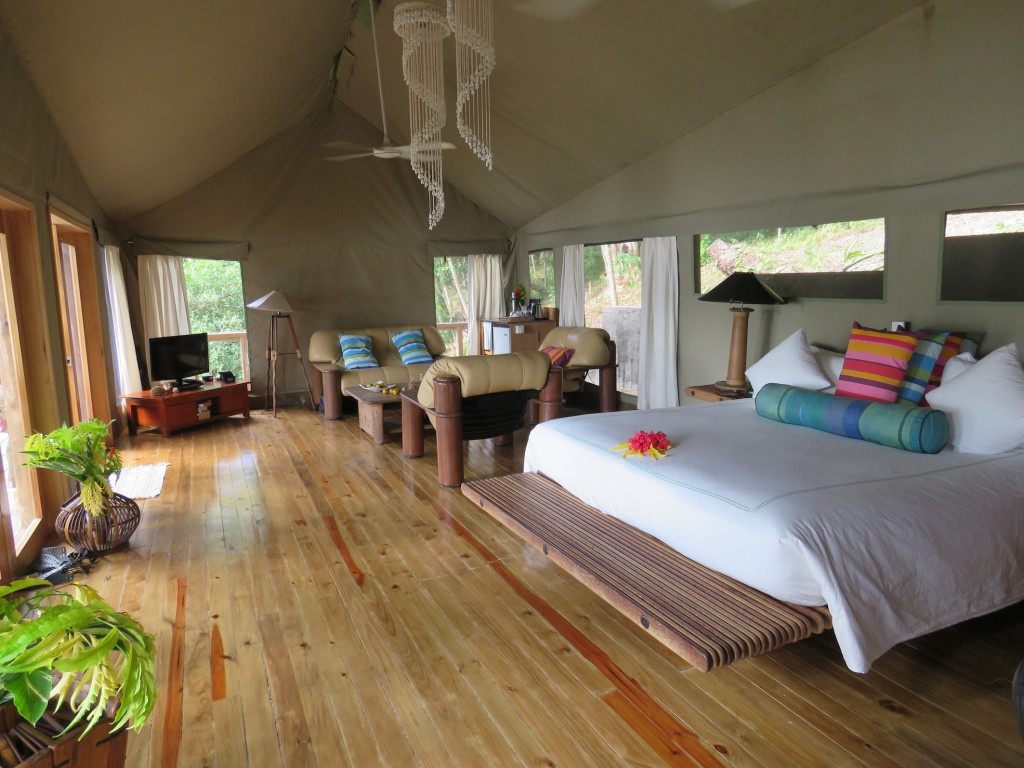 Inside the safari tent 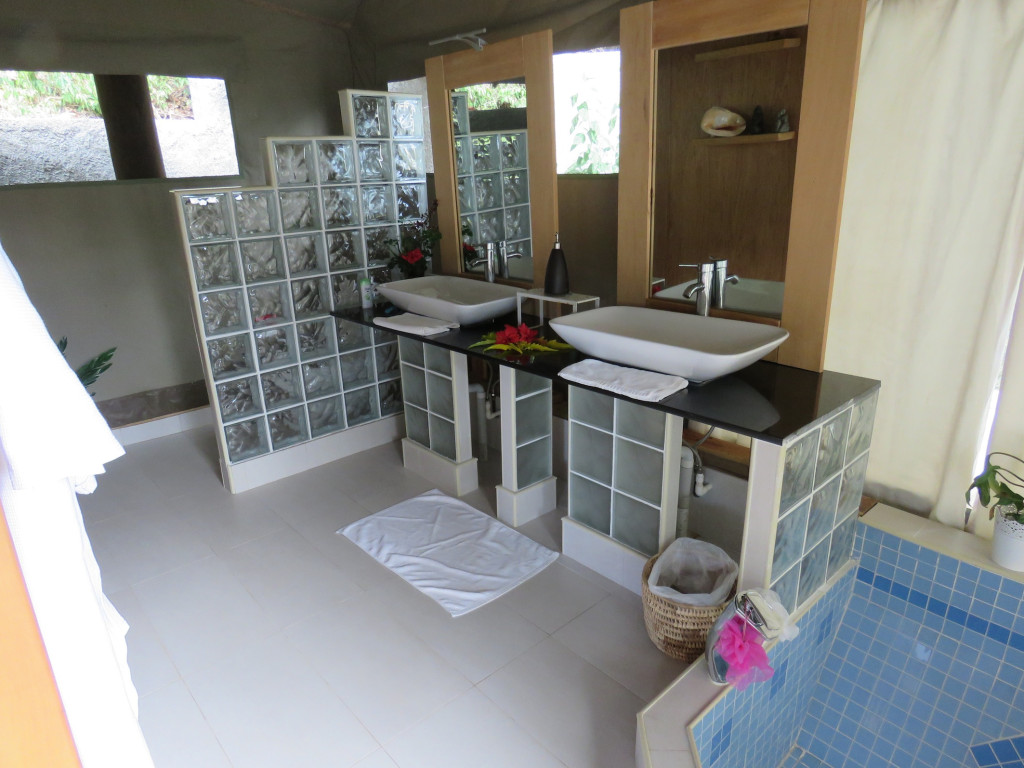 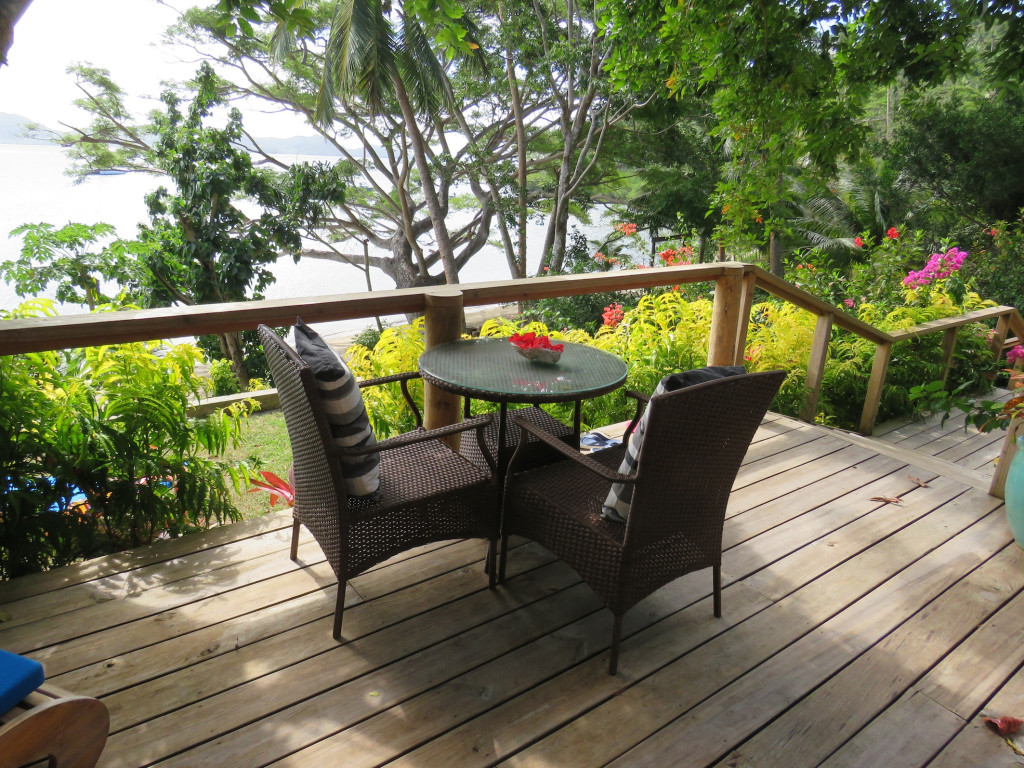 Alfresco meals on the balcony

It was wonderful to catch up with Carol and Nigel, who are truly the most hospitable and welcoming hosts – we can’t thank them enough for going above and beyond in the generosity stakes, even to the point of giving us their spare Honda generator to use as parts to repair our recalcitrant one which hasn’t worked since the Caribbean. It’s the laziest, most useless bit of equipment on the boat, so you can imagine our excitement at the thought of finally getting it working again. Sadly, although we can now get it to run, it still isn’t putting any charge into the batteries so it looks like we’ll have to find an expert to diagnose the problem. Failing that, I’m sure it would make a good anchor mooring for a small boat! And talking of  moorings, Nigel has plans to put in several heavy duty moorings for visiting yachts which will certainly make it an attractive stop-over for cruisers.

It was also the perfect setting for Bruce to get back into dive instructor mode. Marce on Escape Velocity was keen to learn, so after completing her theory it was time to get in the water. Unfortunately she had some difficulties with equalising her ears, so it was a short first lesson, but I have no doubt with her tenacity she’ll be keen to have another go before too long! 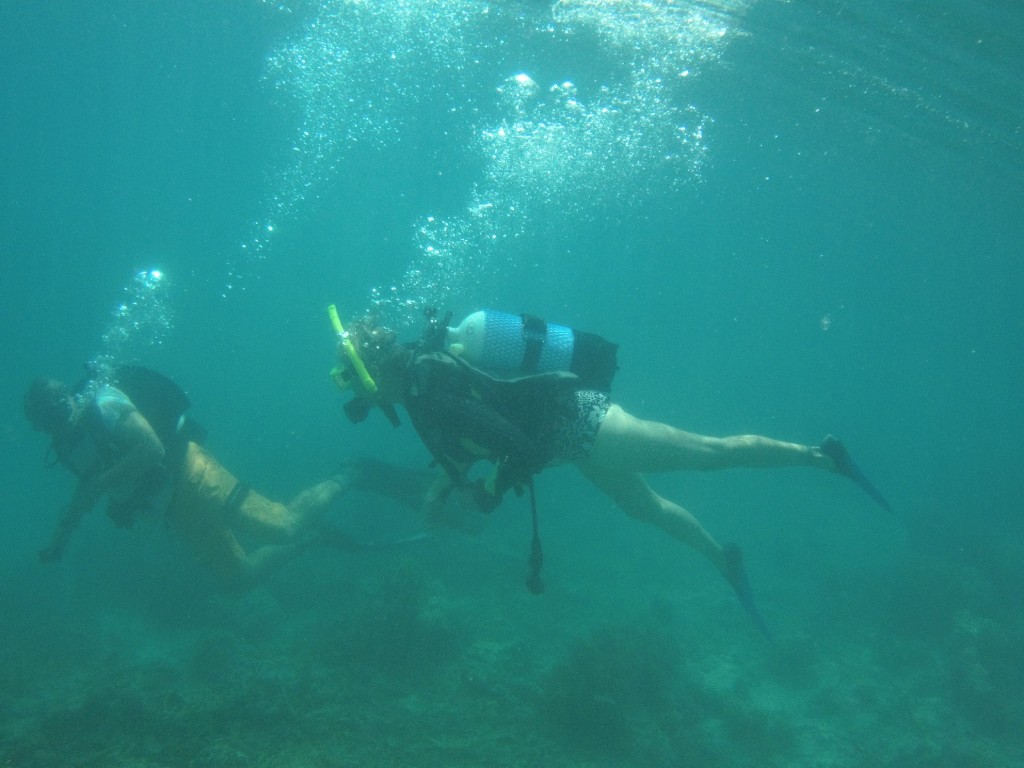 Marce and Bruce on scuba

It would have been so easy to soak up the tranquility and friendliness of Sau Bay for many more days, but our friends on Rehua were enroute from New Zealand and we were keen to welcome them into Savusavu and celebrate Bruce’s birthday with them. But we’re hoping to get back East again later in the season, and you can be sure that Sau Bay will be on our list for a re-visit. Bula Vinaka Carol and Nigel – thank you for sharing your most perfect slice of heaven with us. 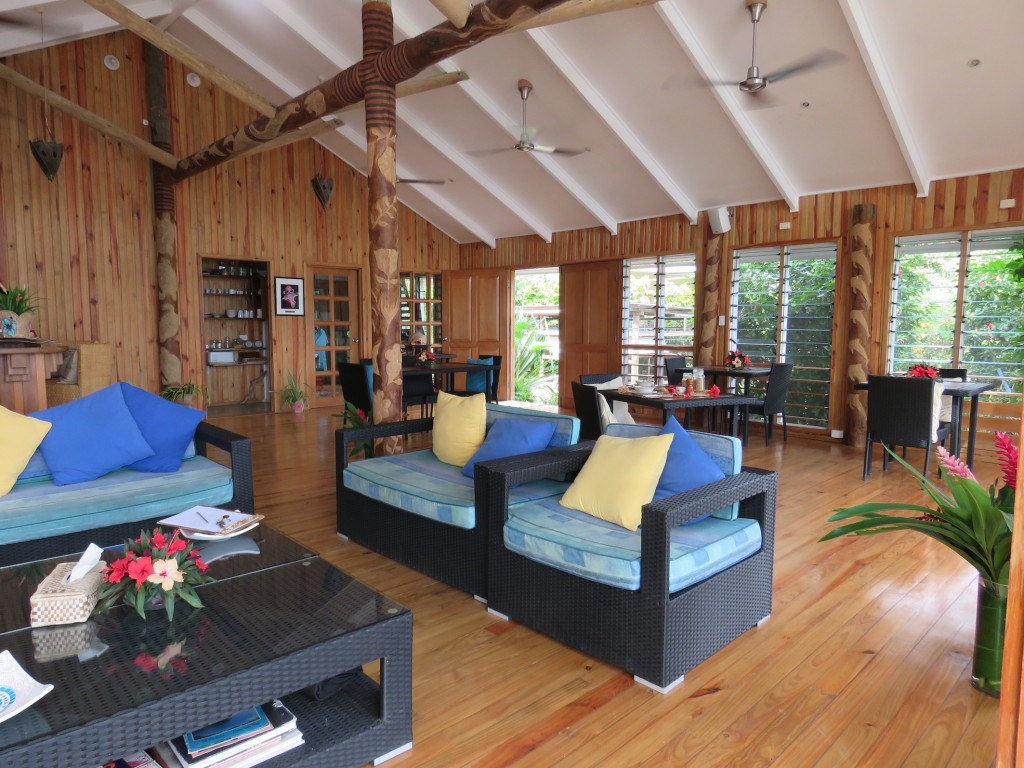 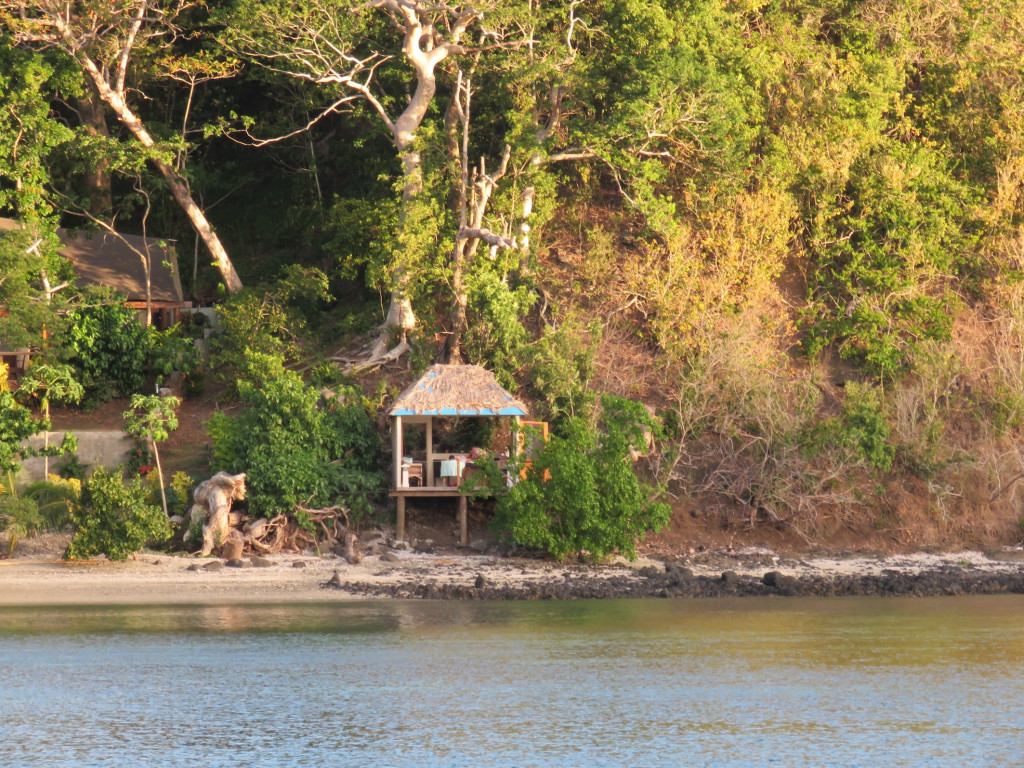 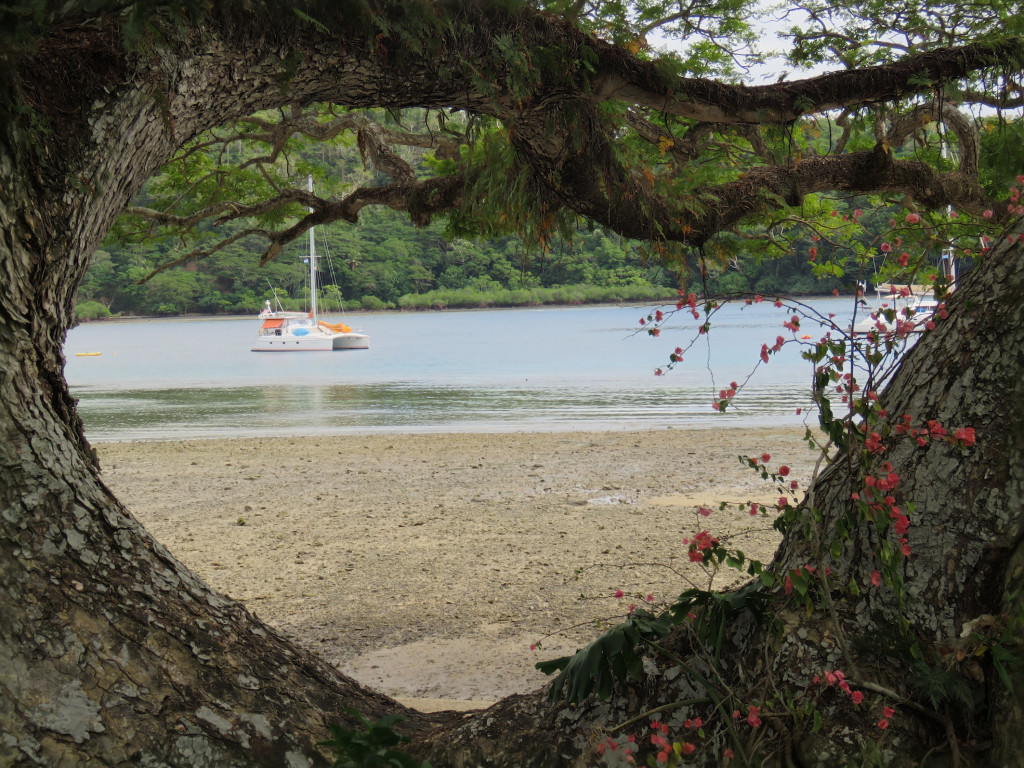 Escape Velocity through the rain tree 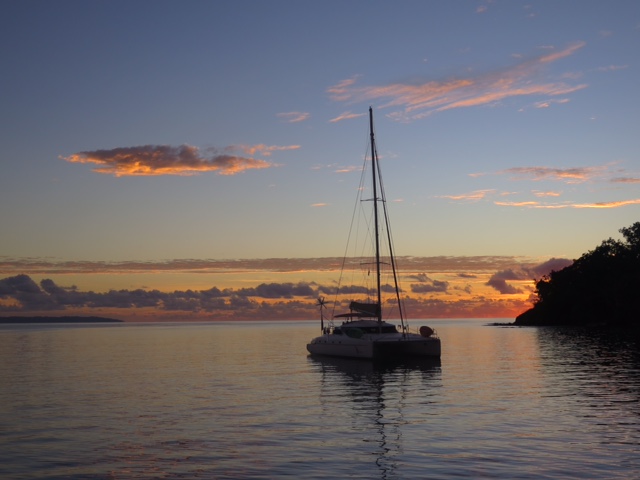