Back Together Again – Savusavu and beyond, Fiji 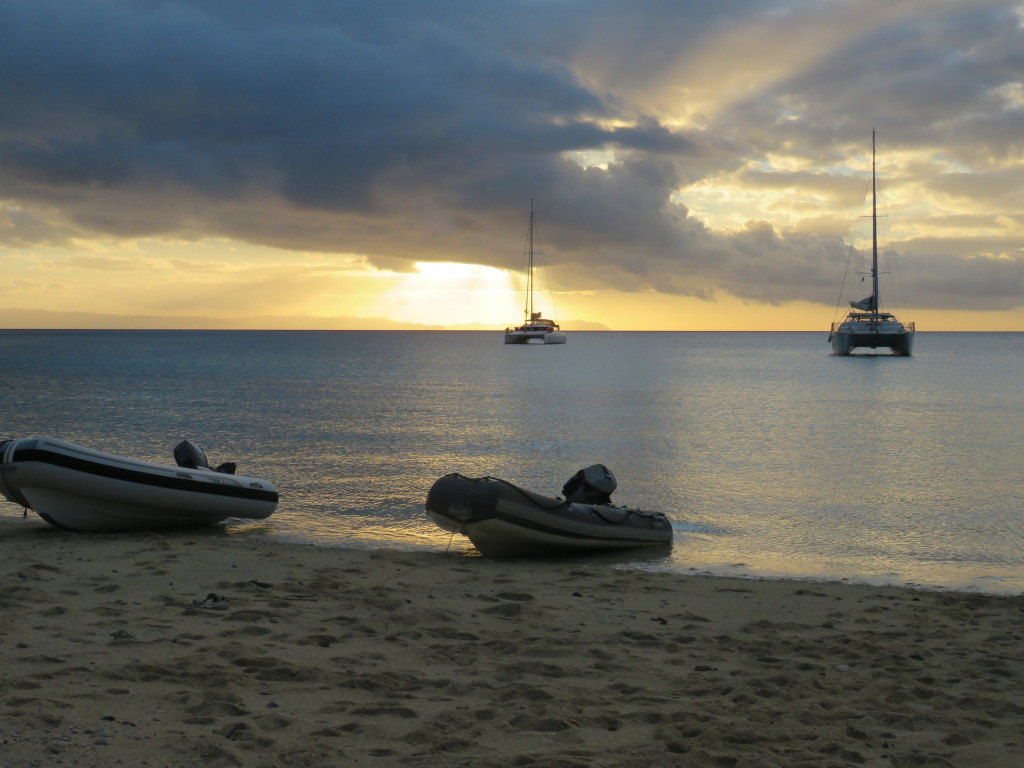 One of the many joys of this life afloat are the friendships you make along the way with other cruisers. We’re all in this together, helping each other out when we can – commiserating, sharing a laugh, a beer, and information about where we’ve been or where we’re going. Sometimes the connections are brief, as we cross paths on divergent courses, other times they’re more sustained, but always they’re a pleasure and enrich our lives.

Last year we spent several wonderful months travelling across the Pacific in company with ‘Rehua’ – Seathan, Audrie and their two sons, Tyrii and Aeneas. What a blast we had, and what great friends they’ve become. We’d intended to do the passage down to New Zealand together too, but our autopilot problems meant we were delayed in Tonga. Once in New Zealand we only got the chance to catch up a couple of times due to our differing schedules, and then as we were about to leave for Fiji, Seathan had the misfortune to slip and fracture several ribs (ouch!) meaning they were delayed leaving NZ until his ribs healed.

So when we heard they were finally underway we were more than a little excited and keen to catch up. Bruce’s birthday was coming up, so what better way to celebrate than with a reunion with Rehua in Savusavu? Our other good friends, Marce & Jack from ‘Escape Velocity’ had plans to go East to the Lau group, so as is the way with cruisers we said our goodbyes (for now) and made plans to hopefully reunite with them in a few weeks.

As we approached Savusavu bay, we were entertained by a booby who, for some reason, was determined to land on our spreaders. Maybe it was a dare from his mates. His antics were hilarious, with several failed attempts including crashing into our genoa and sliding down it. I was laughing so hard I forgot to video it, but when he finally succeeded we didn’t have the heart to shoo him off. (I regretted that the next morning when our deck was covered in booby shit). 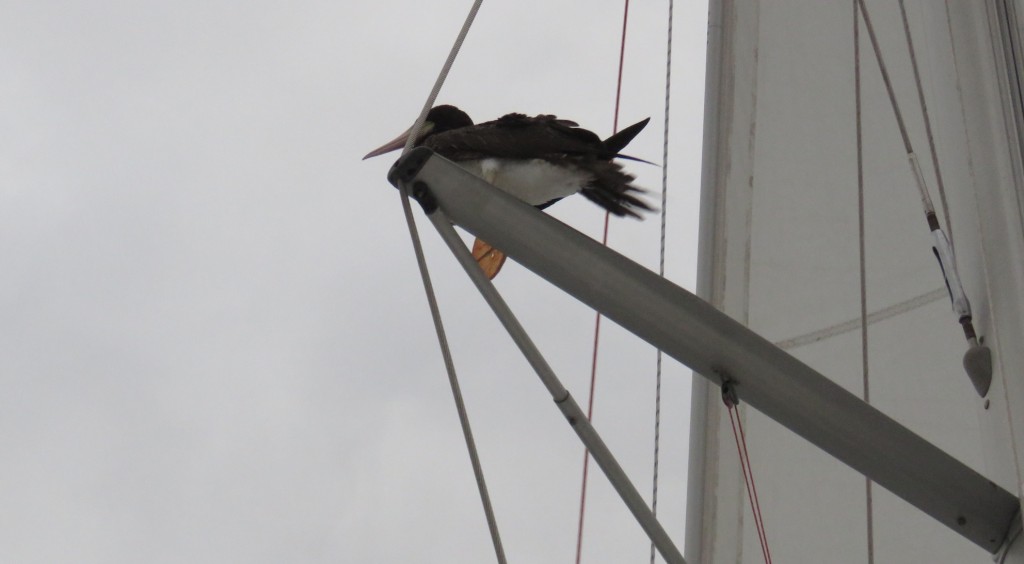 Charlie Chaplin of the Booby world

As it was getting dark we dropped anchor off the Cousteau Resort again, ready to head into Savusavu the next morning in time to greet our friends. Imagine my surprise when I looked out the companionway at crack of dawn and saw a very familiar boat anchored alongside! They’d arrived in the wee small hours, saw our AIS position and decided to join us! We exchanged greetings across the water and then motored in with them and picked up our old mooring while they cleared customs. After that it will come as no surprise to hear that the first port of call was the Savusavu Yacht Club for some celebratory beers. 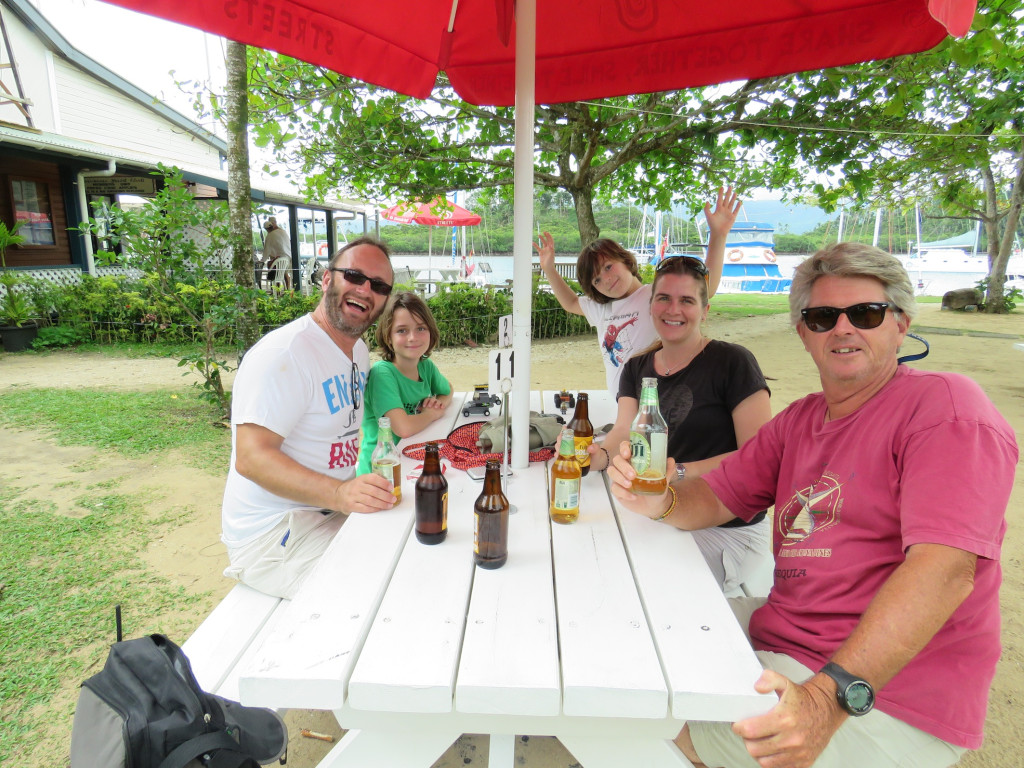 The Rehualigans are back in town!

We took the opportunity to do some provisioning and laundry and had a very nice meal at the “Surf & Turf” restaurant on the waterfront for Bruce’s birthday. 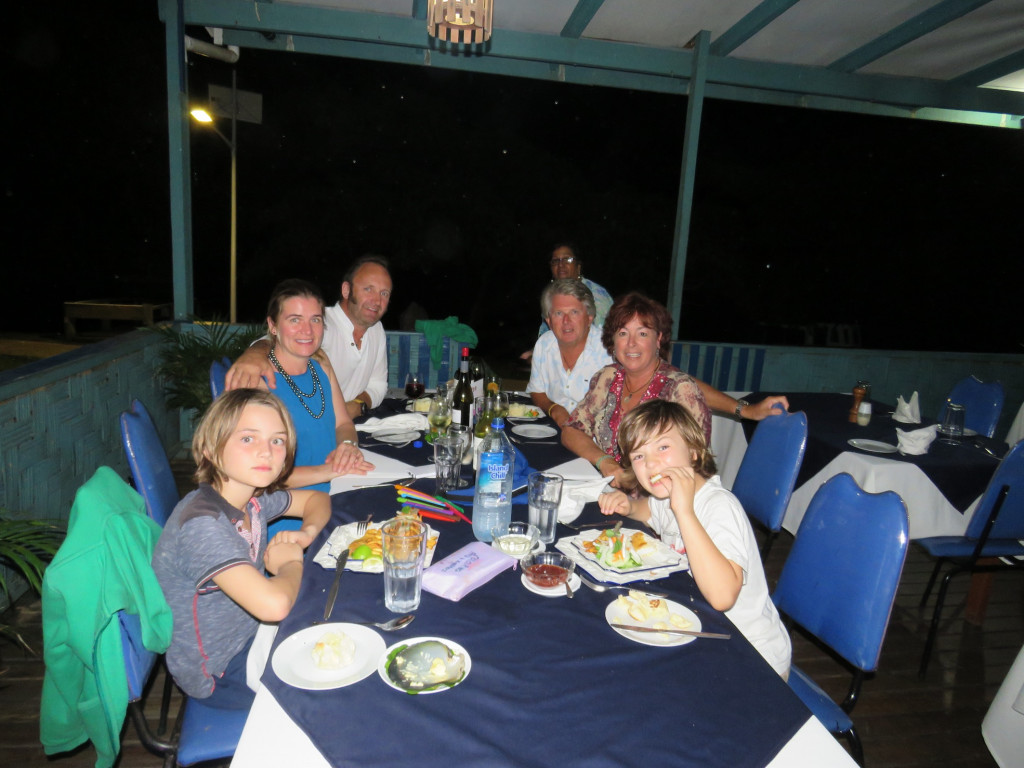 The following day both boats headed south-west to Namena reef, hoping to have a couple of days of diving there. We had a great sail but the good wind meant it was quite choppy even inside the reef. The only anchorage on the NW of Namena Island was protected from the SE wind, but the swell wrapped around making it a bouncy night. Sadly, this island also shows the devastation wreaked by Winston, making it less than inviting. 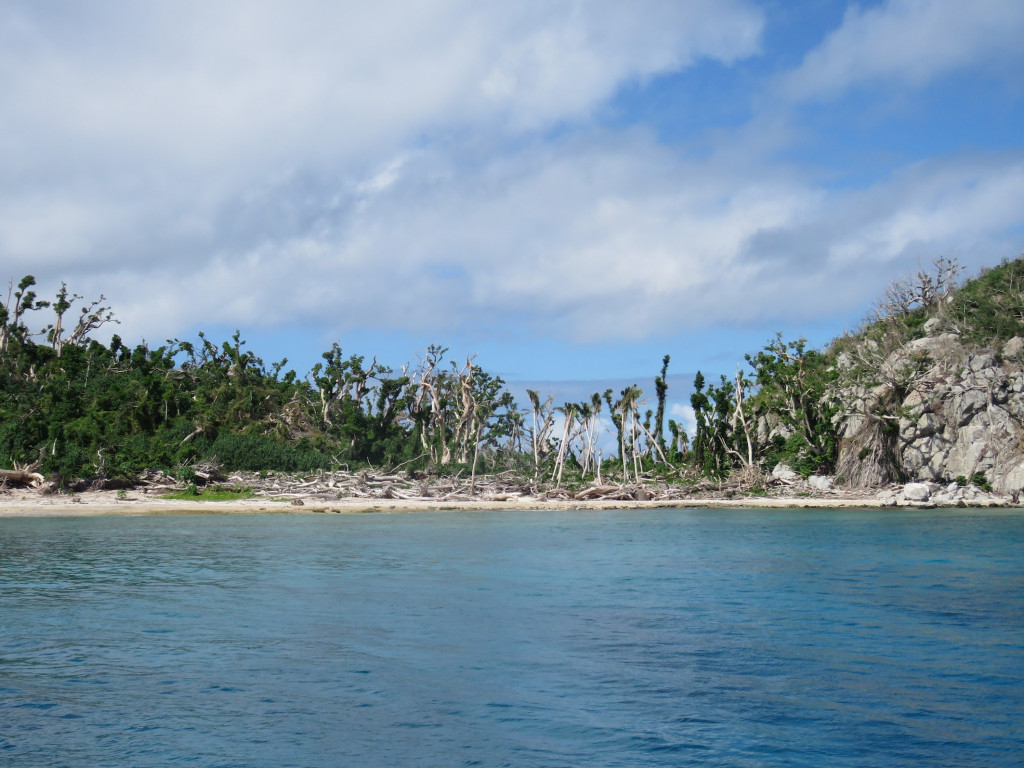 The next morning the wind was still strong and conditions were too rough on the reef for diving, so we decided to push on towards the big island of Viti Levu. But first we had to get our anchor up – the anchorage is strewn with coral bommies and although we dropped in a sand patch, both Toucan and Rehua’s chains had wrapped around bommies during the night. Seathan got his anchor up without too much trouble, but ours had a double wrap – we tried driving around in a circle to free it, but in the end Seathan volunteered to jump in the water with his snorkel to help direct us. Did I mention what a good mate he is?! Finally free, off we set on another glorious day’s sail, stopping at Naigani Island for the night before attempting the tricky reef passages around the North coast of Viti Levu. 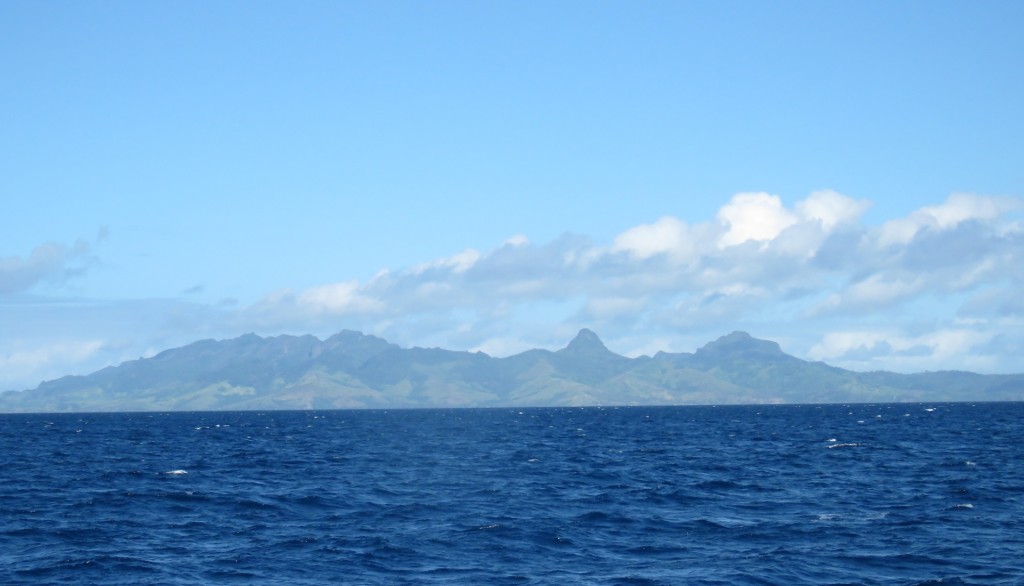 Viti Levu Island on the horizon 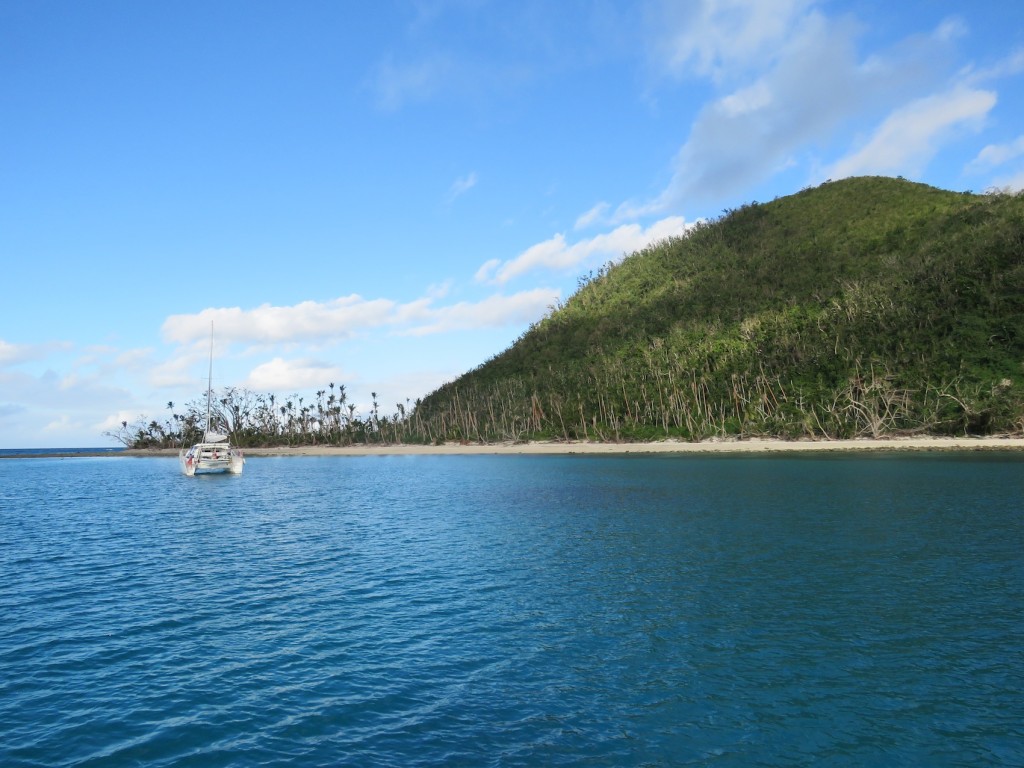 The anchorage at Naigani Island 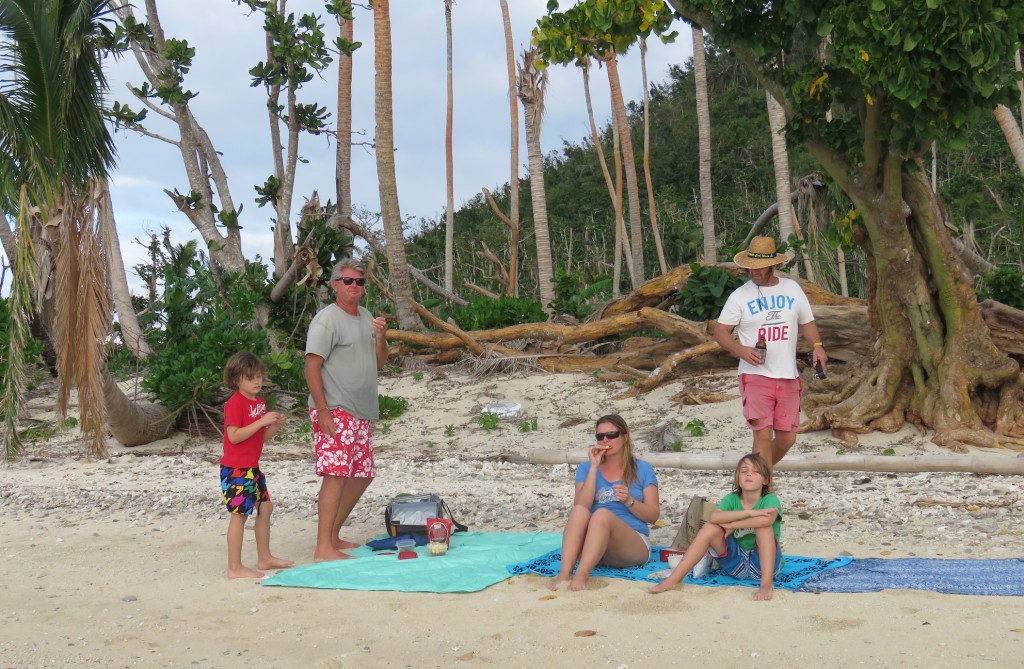 The North coast is girdled with an intricate necklace of emerald reefs so you need good light and your wits about you. 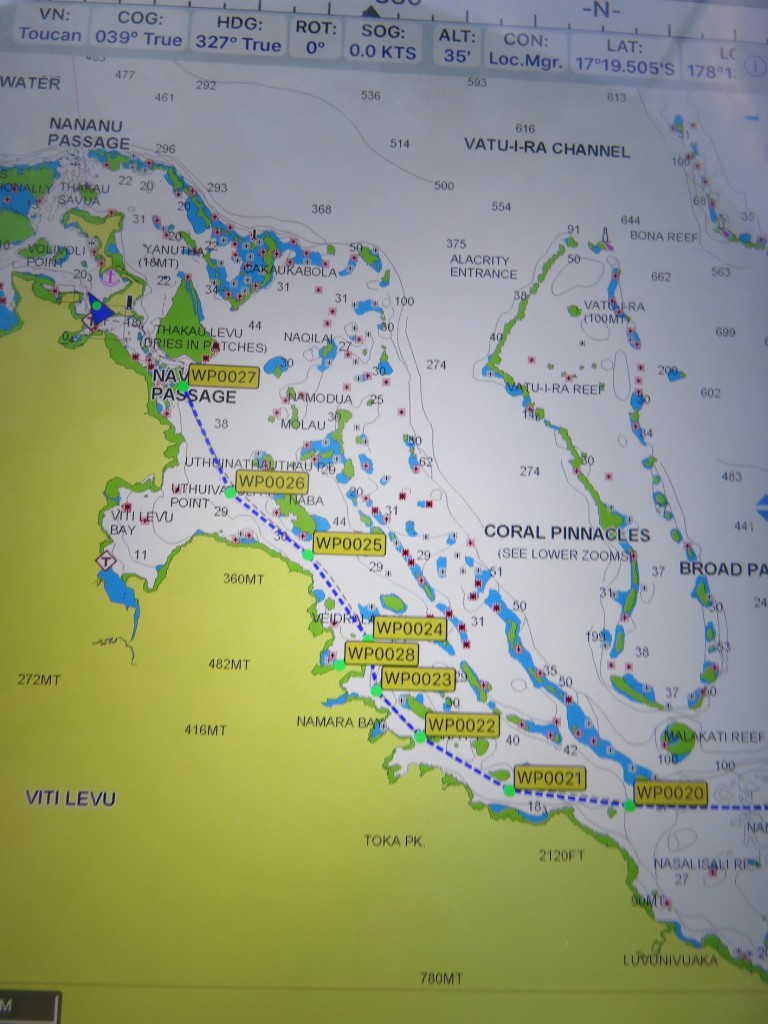 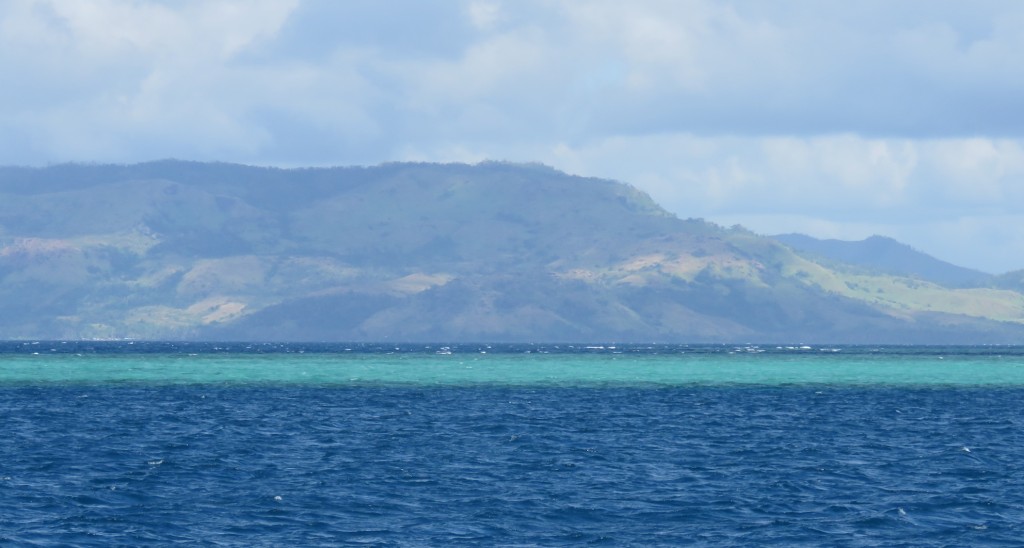 The reefs along the north coast 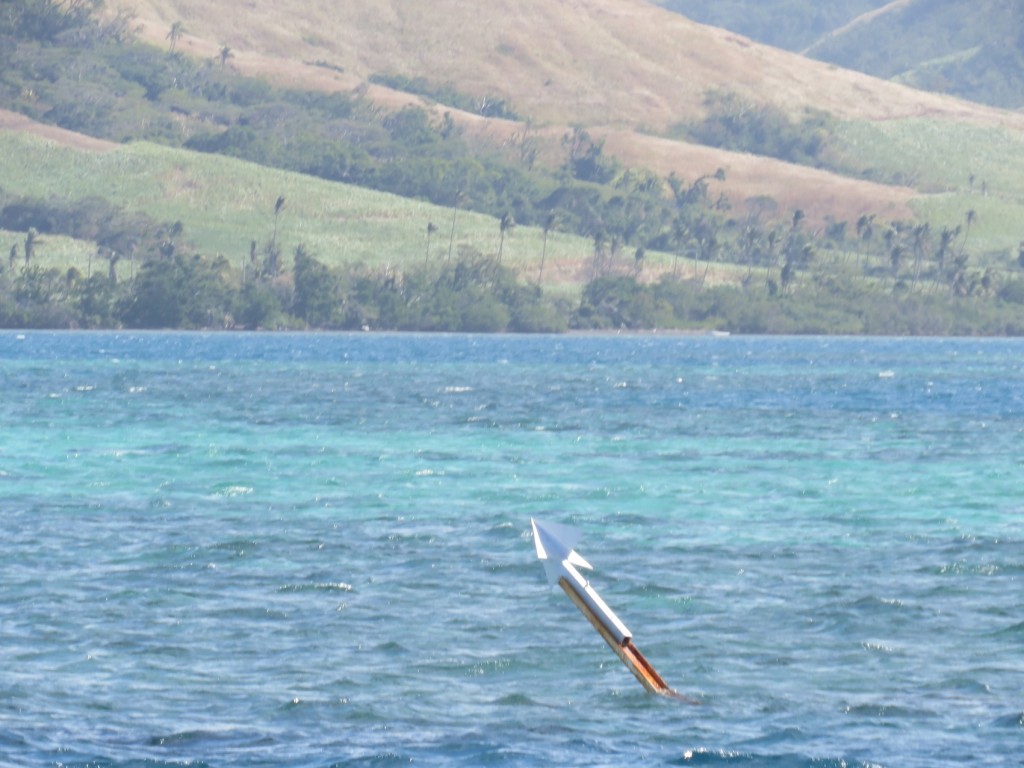 the reef markers are sometimes pretty hard to spot!

With just a genoa up we made good time and by early afternoon we were anchored off Nananu-i-Thake island. From there it was another day hop around the north-west corner and down to Vitogo Bay just north of the industrial port of Lautoka. We’d been religiously putting our fishing line out every day with nary a nibble. But finally the persistence paid off and we landed a beautiful wahoo, which made a delicious BBQ dinner shared with Rehua that night. 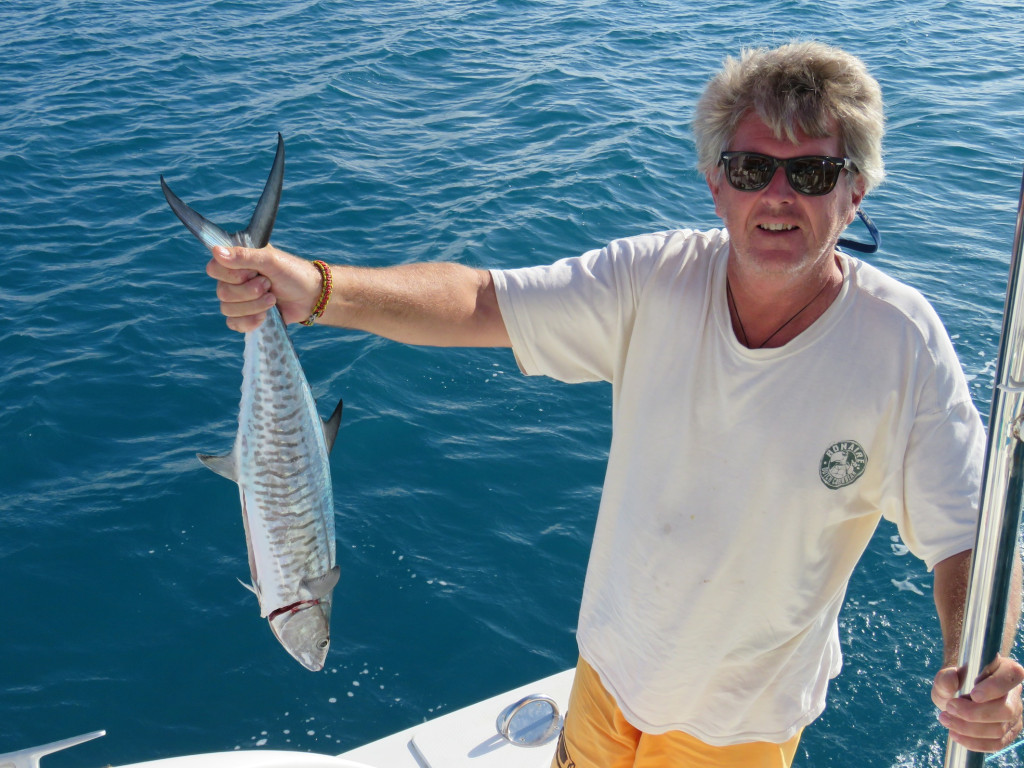 Finally! He may not have been as big as the one Rehua caught, but he was delicious! 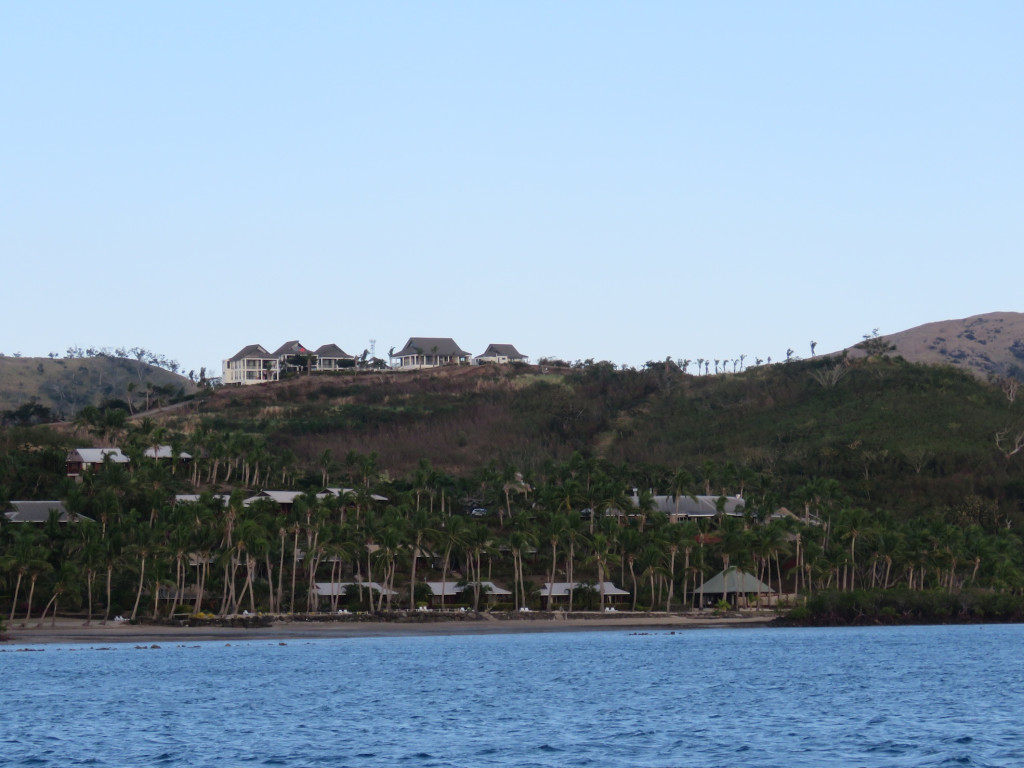 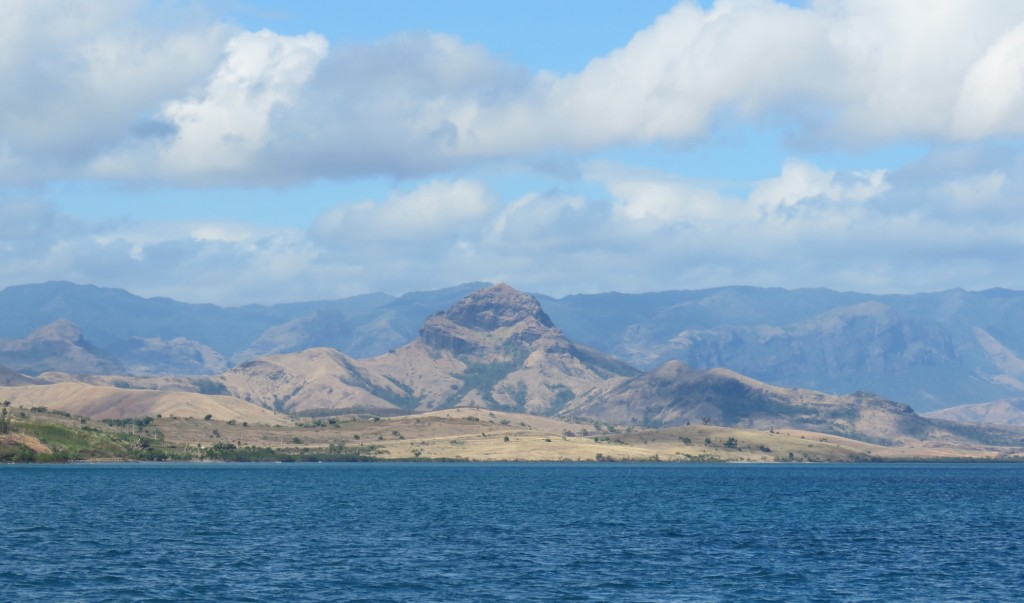 The northern part of the island is surprisingly barren and dry 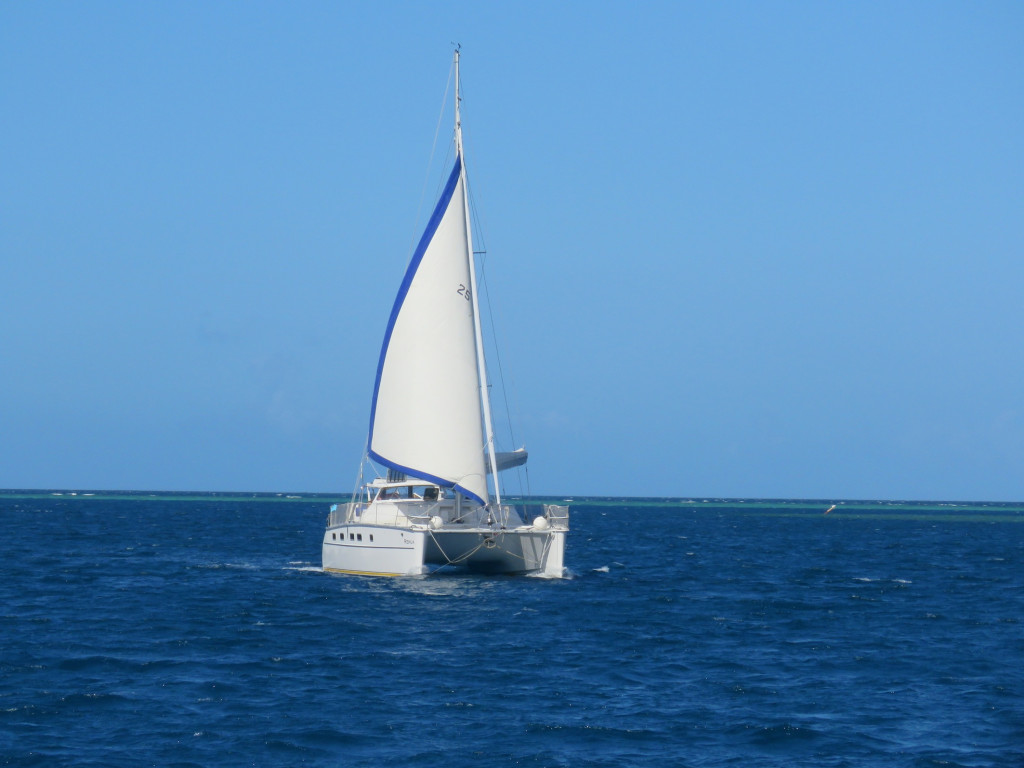 Ahh, it’s good to be in company with the ‘chunky monkey’ again!

As we were threading our way through the reefs the radio crackled to life “Toucan, Toucan, this is Mango Moon, Mango Moon” – Frank and Lisa, who were at Whangarei Marina with us, were coming up the channel towards us, heading east as we were heading west! We had a great chat on the radio as we passed each other, waving like crazy. You never know when you’re going to see friends again, which makes it all the more joyful when you do. 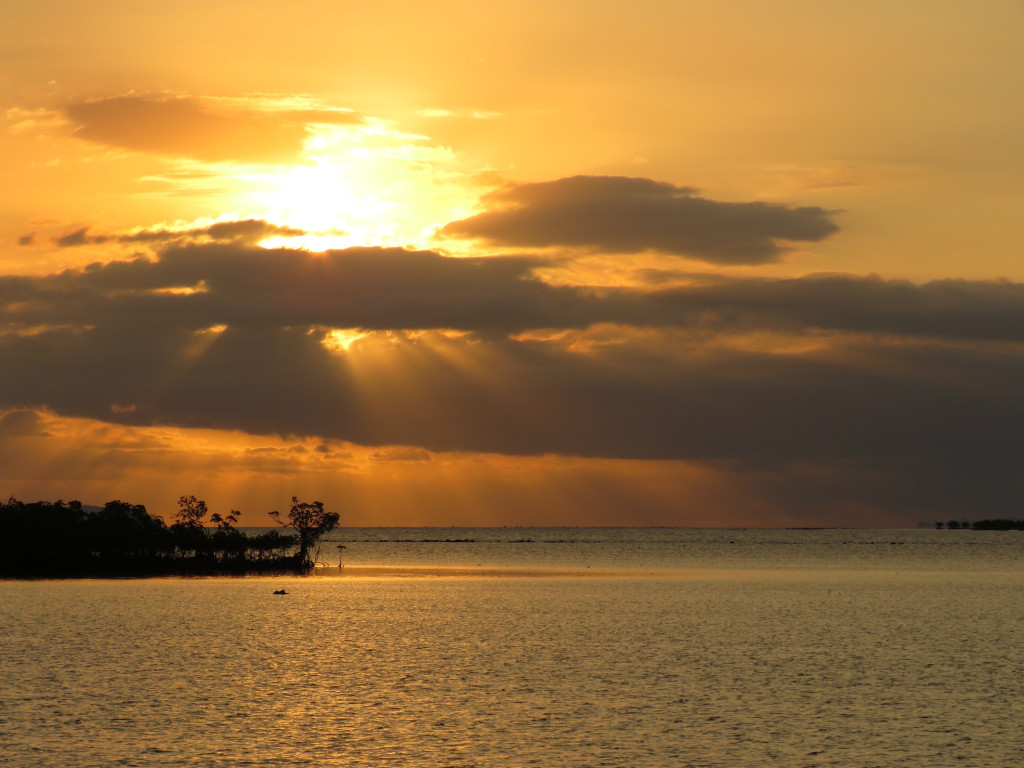